Falling just short of the predecessor’s high notes,  Spider-Man: Miles Morales is still a worthy title for the protégé. You may be too caught up in free-falling or postcard collecting to notice, but Morales’ stand-alone game is actually missing a rather famous building from its cityscape.

The iconic superhero has been web-swinging around New York City throughout a majority of the Marvel Universe’s timeline. Whenever Spider-Man’s home is featured, most of New York City’s iconic landmarks are included in the backdrop, adding a greater sense of realism to crime-fighting. Marvel’s Spider-Man featured Radio City Music Hall, Central Park, and St. Patrick’s Cathedral. Another of New York City’s identifying features – the Chrysler Building – also appeared in the 2018 game, however its presence has not been included in Miles Morales’ skyline due to copyright issues.

In an interview with Game Informer, Insomniac Games community director James Stevenson confirmed that the Chrysler Building was not included in the game’s city because the real building changed ownership in 2019. Since 2018, 90% of the building was owned by the Abu Dhabi Investment Council, until it was sold last year to Austrian company SIGNA Group and RFR Holding LLC. for $150 million. Consequently, the initial agreement between Insomniac Games and the previous owner was voided. Stevenson stated that Insomniac wanted to include as many landmarks as possible in-game, but regrettably, some negotiations with certain locations “didn’t work out.” 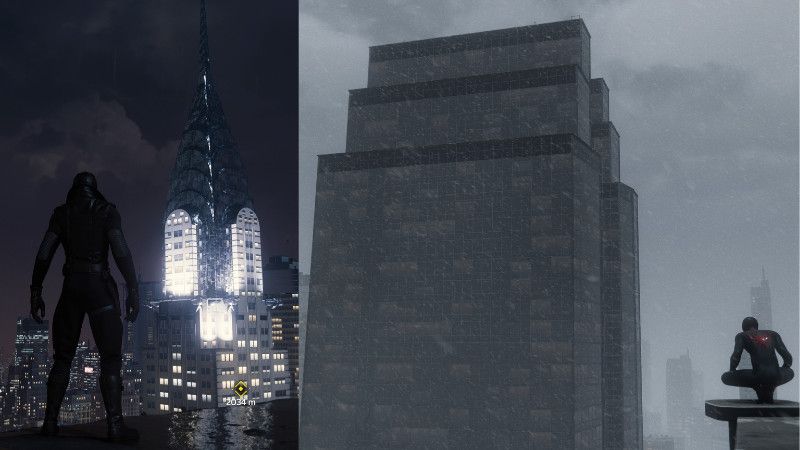 The famous Hollywood sign has also had trouble appearing in various forms of media in the past, due to similar rights issues. So, what stands in the Chrysler Building’s place in Spider-Man: Miles Morales? Well, nothing spectacular. What stands in its previous spot is a rather bland skyscraper bereft of lights or any signature shape. The Chrysler was one of the top buildings that Spider-Man fans enjoyed climbing in the previous game, carefully ascending the structure’s needle. While it will be missed in the metropolis, the PS5 launch title still has a lot to offer.

We thought Spider-Man: Miles Morales was “more refined than the sugar in a New York bagel” in our review, which also highlighted the pros and cons compared to its critically-acclaimed predecessor.