The Game Awards are taking place this evening as a huge online event that has outgrown the term “the Oscars of gaming.” But if you don’t want to wait to know who audiences favor, you can check with the conversation intelligence platform Spiketrap.

Spiketrap measures the audience sentiment using artificial intelligence techniques, drilling down into the biggest social media platforms to find out what people favor or don’t like. And this year, the company applied its AI to studying the favorites for gamers.

The Game Awards drew more than 50 million viewers in 2019, and this year it should easily top that as it has expanded distribution.

This year, Spiketrap believes Animal Crossing: New Horizons is the favorite for Game of the Year, as audience engagement with that game hit 44.5 million messages over the year, while The Last of Us Part II was favored by about 10.8 million messages by comparison. When it comes to sentiment, however, Ghost of Tsushima ranks high, as does Hades. But the likely winner would probably be the one that generated most of the engagement, as opposed to the sentiment leaders. 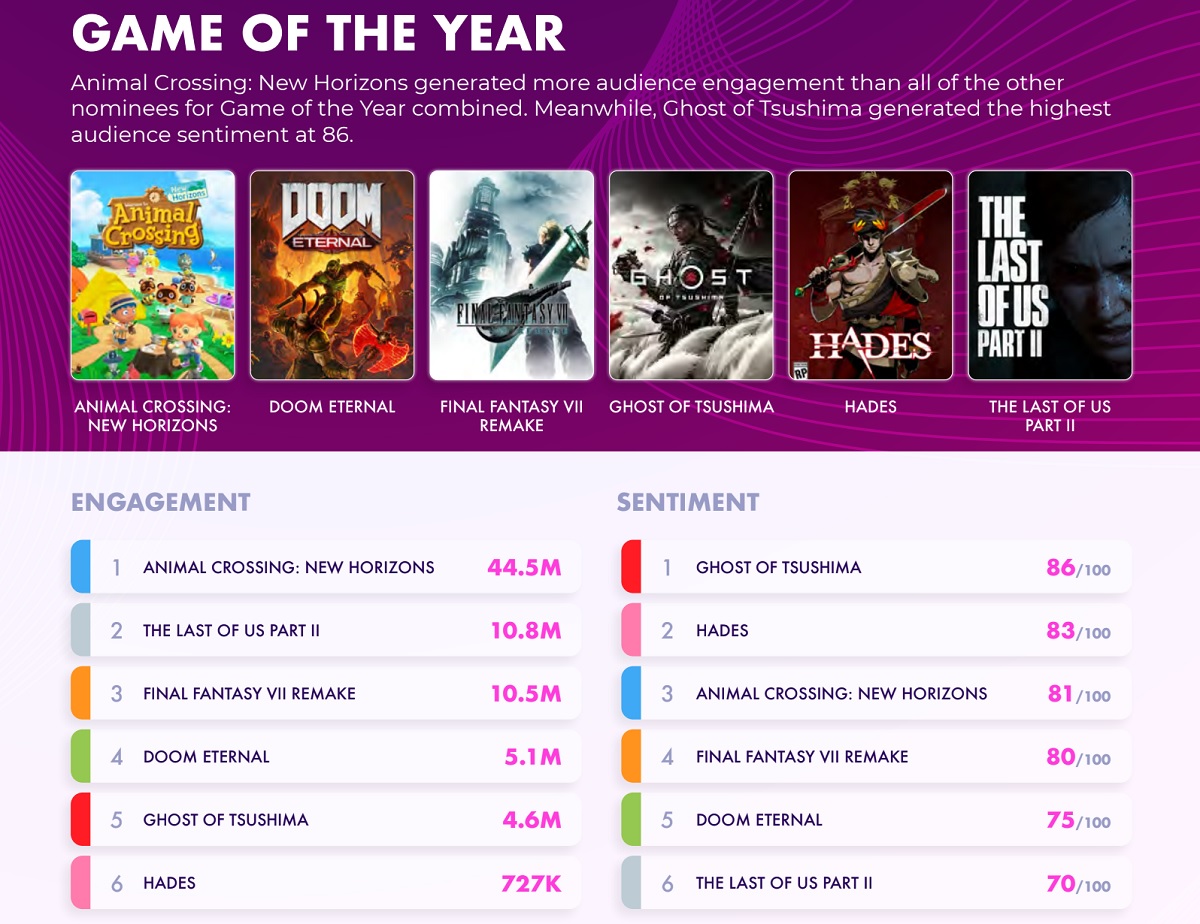 Above: Spiketrap’s data on engagement and sentiment around games nominated for the top honors at The Game Awards.

Others in the rankings include Final Fantasy VII: Remake (10.5 million), Doom Eternal (5.1 million), Ghost of Tsushima (4.6 million), and Hades (727,000). These results matter not only for the people’s choice voting, but in the final results as well because audience votes are 10% of the final score.

In other categories, Raji: An Ancient Epic scored the best audience sentiment with a score of 92, the highest of any game analyzed for the study. Spiketrap analyzes the context in which games are mentioned, as either favorable or not, or focusing on a particular aspect of the game.

The Game Awards will air live in from Hollywood, California, with special segments from other locations around the world.

The Game Awards will air live across more than 45 digital video networks including Twitch, YouTube, Twitter, Facebook, and globally on more than 30 digital networks in countries including China and India. Meanwhile, The Game Awards announced this morning its list of 50 diverse “future class” leaders who are leading the future of gaming.