On January 2, Steam broke its own record as the concurrent number of users on the platform reached a staggering 25 million. That’s akin to half of England logging in at the same time. That being said, only 7.4 million of those were in-game compared to March’s 8.1 million in 2020.

The users in-game naturally flocked to the big three: Counter-Strike: Global Offensive, Dota 2, and PLAYERUNKNOWN’S BATTLEGROUNDS. That being said, Cyberpunk 2077 is still ahead of Grand Theft Auto V, even if only by a hair, while Team Fortress 2, Tom Clancy’s Rainbow Six Siege, Rust, Apex Legends, and ARK: Survival Evolve trail behind.

As of writing this, the current number of concurrent Steam users is still a hefty 23 million, only 2 million behind the new record. The COVID-19 pandemic has definitely played a role with so many strapped indoors to their desks – surely, there are others who like to boot up Mortal Kombat 11 towers during lectures and meetings – right? 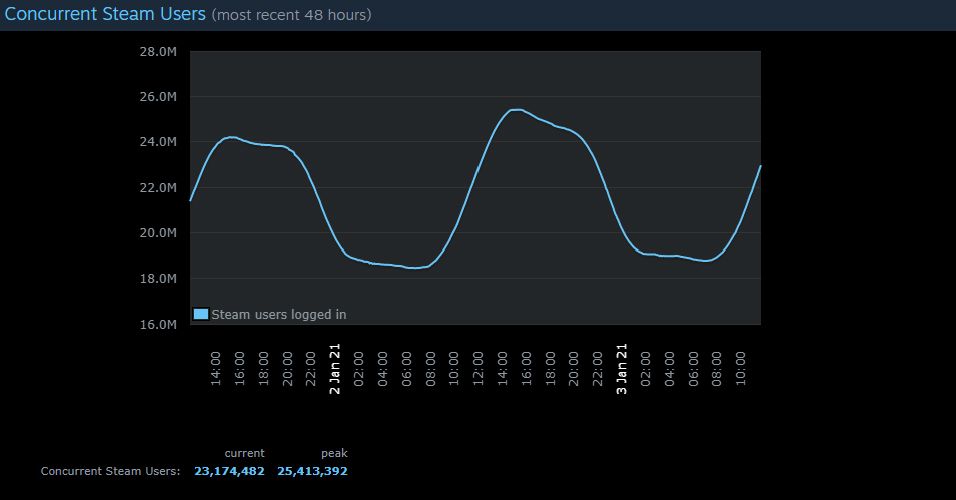 It won’t be long before Steam breaks its own record again, and again, and then again. There’s 25 million today, but 30 million is likely right around the corner, especially with so many still working, studying, and just being at home.

Nonetheless, it’s certainly impressive, as it was only in September that they hit a record peak of 21 million which is still, right now, broken, at the aforementioned 23 million. Although, as far as what players are playing right now, Among Us seems to have lagged behind, going beneath The Witcher 3, PAYDAY 2, and Stardew Valley.

It’d be interesting to see how these numbers stack up to the likes of the Nintendo Switch, PlayStation, Xbox, GOG, and Epic Games player bases. The latter reported a peak of 13 million in June of last year, but with the pandemic ongoing and the wealth of free games given away in the holidays, this number may have grown, even if not to Steam’s heights.