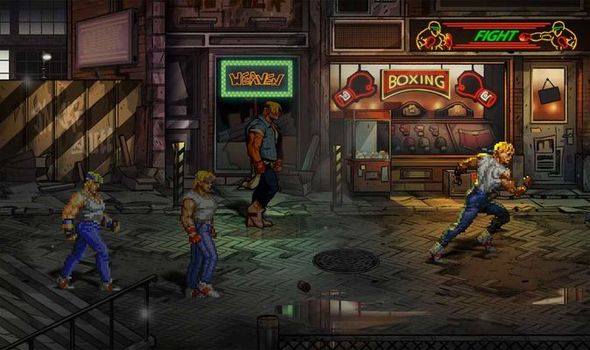 Streets of Rage 4 has been earning good reviews in the lead up to its full release date this week on Nintendo Switch, PS4, Xbox One and PC. And this will only lead to even more excitement surrounding the return of the retro beat’em up, this time not limited to just one platform. The Streets of Rage 4 release date has been set for Thursday, April 30, 2020, and it looks like gamers are going to have to wait to download it.

So far, there has been no word on an early pre-load, meaning you will have to wait until it launches on digital storefronts.

And the good news is we now know when that will be happening globally.

WHAT TIME DOES STREETS OF RAGE 4 RELEASE?

Publisher Dotemu has confirmed that the Streets of Rage 4 release time has been set for different times, depending on which platform you’re playing on.

Streets of Rage 4 will be available to download and play at 9am GMT on April 30, 2020 on Steam and Nintendo Switch (EU).

On Xbox One, Streets of Rage will go live at 10am local time, and that should mean on Xbox Game Pass too.

Meanwhile, PS4 gamers will get a different slot, with the Streets of Rage 4 release time set for Midnight PT.

This could mean that the returning beat’em up will be available to play in the UK on PS4 at around 7am GMT.

The Streets of Rage 4 release times as confirmed by Dotemu:

Speaking about bringing back the fan-favourite franchise, publisher Dotemu recently shared more about the new modes coming to the game and how the development was handled, telling fans:

“Battle Mode lets you select your favourite characters and test your skills against one to three friends across several memorable levels. While it’s true that Streets of Rage 4 is all about cooperation, we thought it would be fun to let you guys play around with the characters and discover which of them is the most powerful, and which ones best suit your playing style.

“You can try out Battle Mode with the Streets of Rage 4 characters, as well as the complete roster of twelve retro characters that we announced last week (once you’ve unlocked them, of course!).

“In Streets of Rage 4, you’ll be able to use the characters from previous Streets of Rage instalments. We brought back almost everybody (sorry Roo) – complete with their own shiny pixel-art outfits and unique characteristics, for a total of 17 playable characters.

“You may already know this, but you’ll also be able to choose between two different soundtracks for Streets of Rage 4.

“One is an all-new soundtrack composed by an all-star line-up of musicians (including Olivier Deriviere, Yuzo Koshiro, Motohiro Kawashima, Yoko Shimomura, Das Mörtal, Scattle…). The other consists of tracks selected from Streets of Rage 1 and 2 – for those who want the full nostalgic trip! Plus, you can switch soundtracks in-game whenever you want.”