Before Insomniac Games was developing adventures for our friendly neighborhood Spider-Man, the studio created an amazing, goofy experience with Sunset Overdrive. Set in the near future in the year 2027, Sunset Overdrive is essentially the hipster zombie apocalypse. The people of Sunset City have turned into mutants after consuming an energy drink from the FizzCo organization.

Your main task in Sunset Overdrive is simple – stop FizzCo and save Sunset City. Throughout your journey, you’ll encounter several other survivors that will show you the ropes in how to successfully fight your way through the sea of infected. To survive, you’ll come across a wide range of weaponry, ranging from teddy bears strapped with bombs to sprinklers that shoot acid. These are the best of those strange devices. 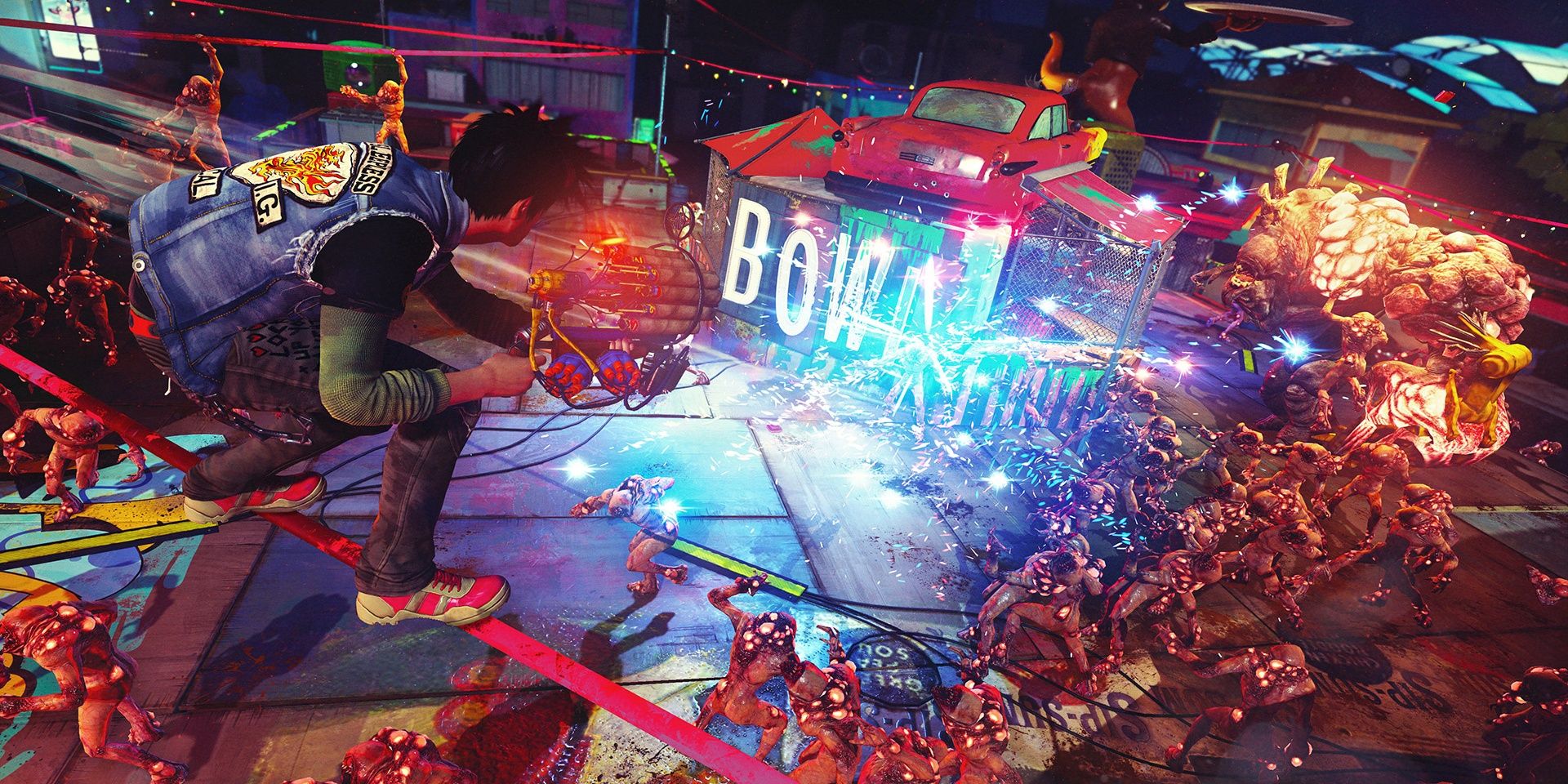 When going against the various OverCharge Drinkers, otherwise known as OD, you’re going to want to be strapped with high firepower. Well, say hello to the Roman Candle. This assault rifle-styled weapon is fitted with 150 roman candle cannons that create small explosions on impact.

The Roman Candle is suitable for most enemies, though, it doesn’t pack the massive punch to make the weapon all-powerful. It’s relatively easy to use and with a lot of ammunition, can be a solid choice to quickly mow down some common ODs. The Roman Candle can be purchased from Two-Hat Jack for 15,000 overcharge. 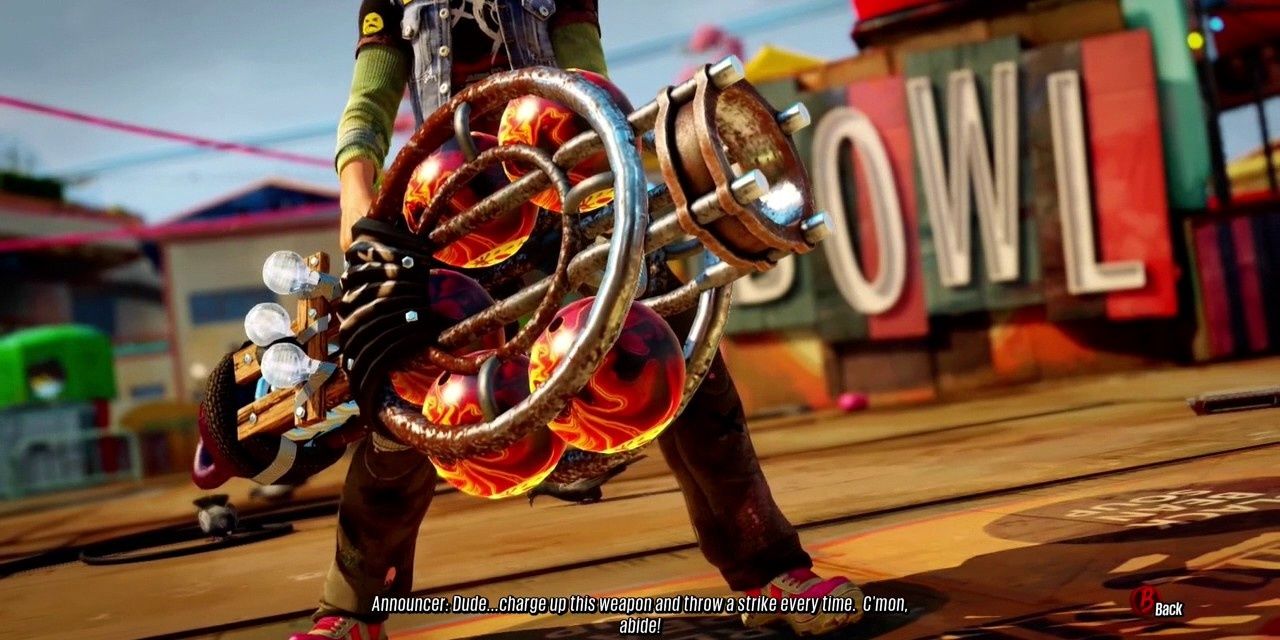 If the last entry didn't make it clear enough, Sunset Overdrive has some pretty creative weapons. Given that the massive threat of the OverCharge Drinkers was a surprise, the remaining survivors had to invent some interesting tools of destruction. One of those originally-designed tools of destruction that will leave enemies crying in pain is The Dude.

Referencing the classic movie The Big Lebowski, The Dude fires bowling balls that explode when they hit enemies or bounce off surfaces before detonating. The damage of The Dude increases based on how much you charge the weapon, so having general map awareness is key to getting the most out of this weapon. Unfortunately, The Dude’s bowling balls only travel on the ground, so this weapon is completely ineffective against aerial foes. 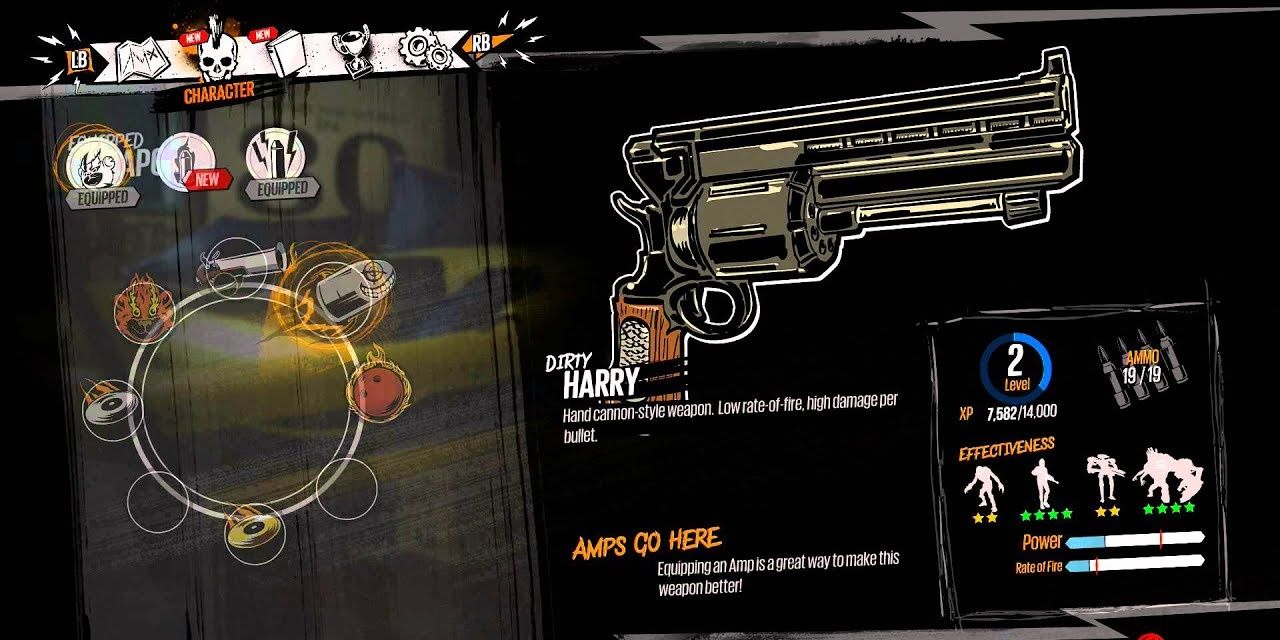 Not every weapon in Sunset Overdrive will cause massive explosions. For people that excel in accuracy and want their enemies to really feel the pain, look no further than the Dirty Harry. This single-shot weapon is a hand cannon that deals considerable damage. Because of its high damage output, the Dirty Harry is most effective against Scabs and Herkers.

When you first reach the Brewery Fort with Walter and you meet Two-Hat Jack, the Dirty Harry is the first weapon you’ll purchase. It’s designed as a bit of a tutorial weapon to get experience using a hand cannon, but don’t think that means it’s not a suitable weapon. If you hit most of your shots, the Dirty Harry is right for you. 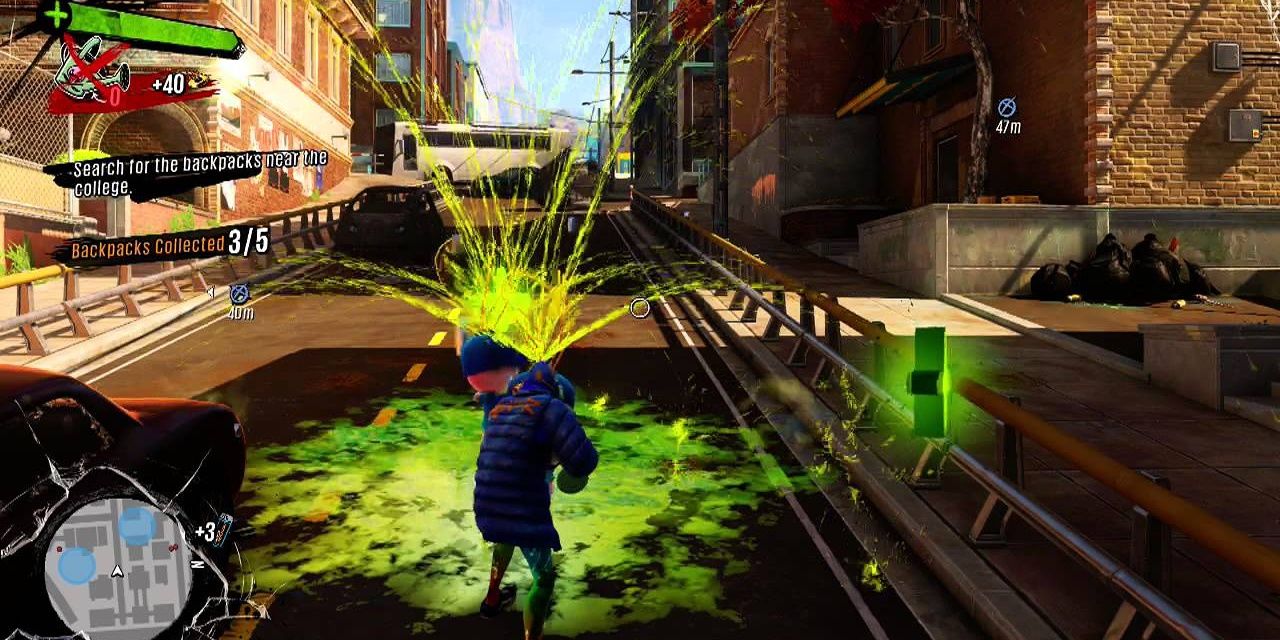 Other than your standard launchers, shotguns, and assault rifles, there are also deployable weapons in Sunset Overdrive. These weapons can be stationary and provide supplemental fire for you, almost acting like another player to help you defeat hordes of OverCharge Drinkers. One of the best deployable weapons in the game is the Acid Sprinkler.

After shooting out a bug toy filled with acid, it’ll plant itself into the ground and spray an acid field that will damage surrounding enemies. The acid will inflict lasting damage to enemies over time, so the Acid Sprinkler is the perfect weapon when defending objectives or even in tight situations. The Acid Sprinkler is available for purchase from Two-Hat Jack early on in the campaign, so it’s recommended you pick up this deadly gardening tool as soon as possible. 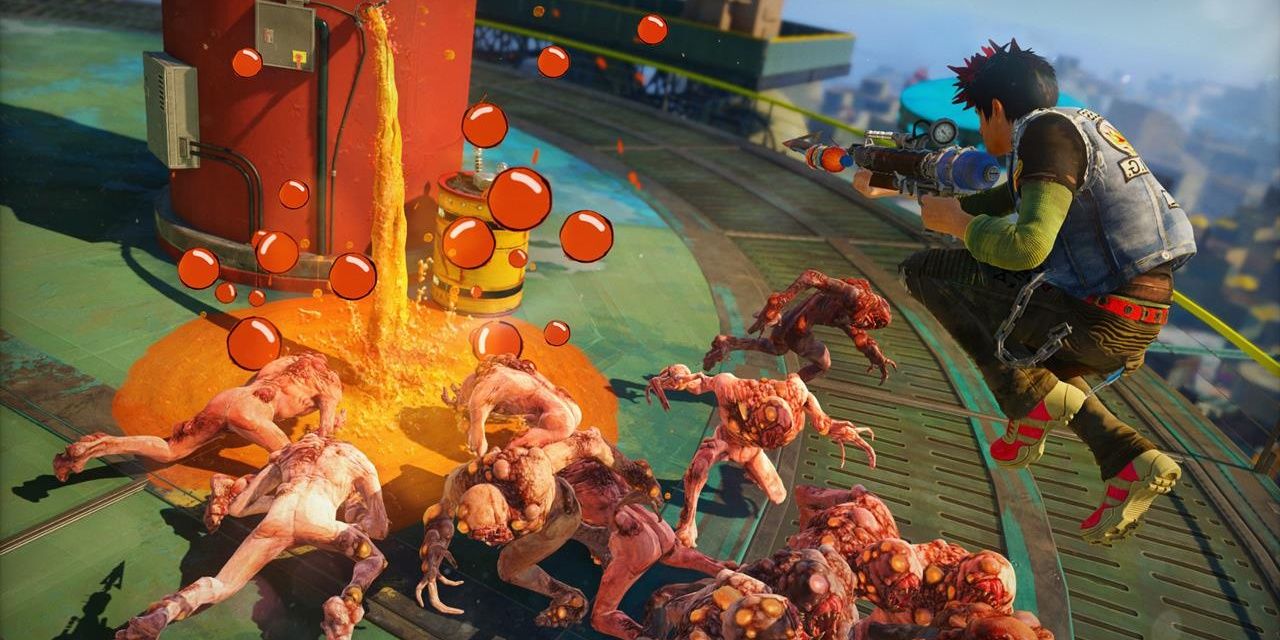 Have you ever imagined sailing the high seas, searching for the majestic Moby Dick? No? Did nobody fantasize about being Captain Ahab? Alright, well, this harpoon gun will surely get you to start. Captain Ahab fires a single-shot harpoon that deals massive damage with each hit.

A secondary effect of the gun is creating a pool of Overcharge that will attract common enemies, making them easier targets. Unlike some weapons in the game, Captain Ahab is most effective against special OverCharge Drinkers because of its high damage output. However, the weapon isn’t well-suited against Scabs, other human survivors that have veered toward extreme hostility and aggression. 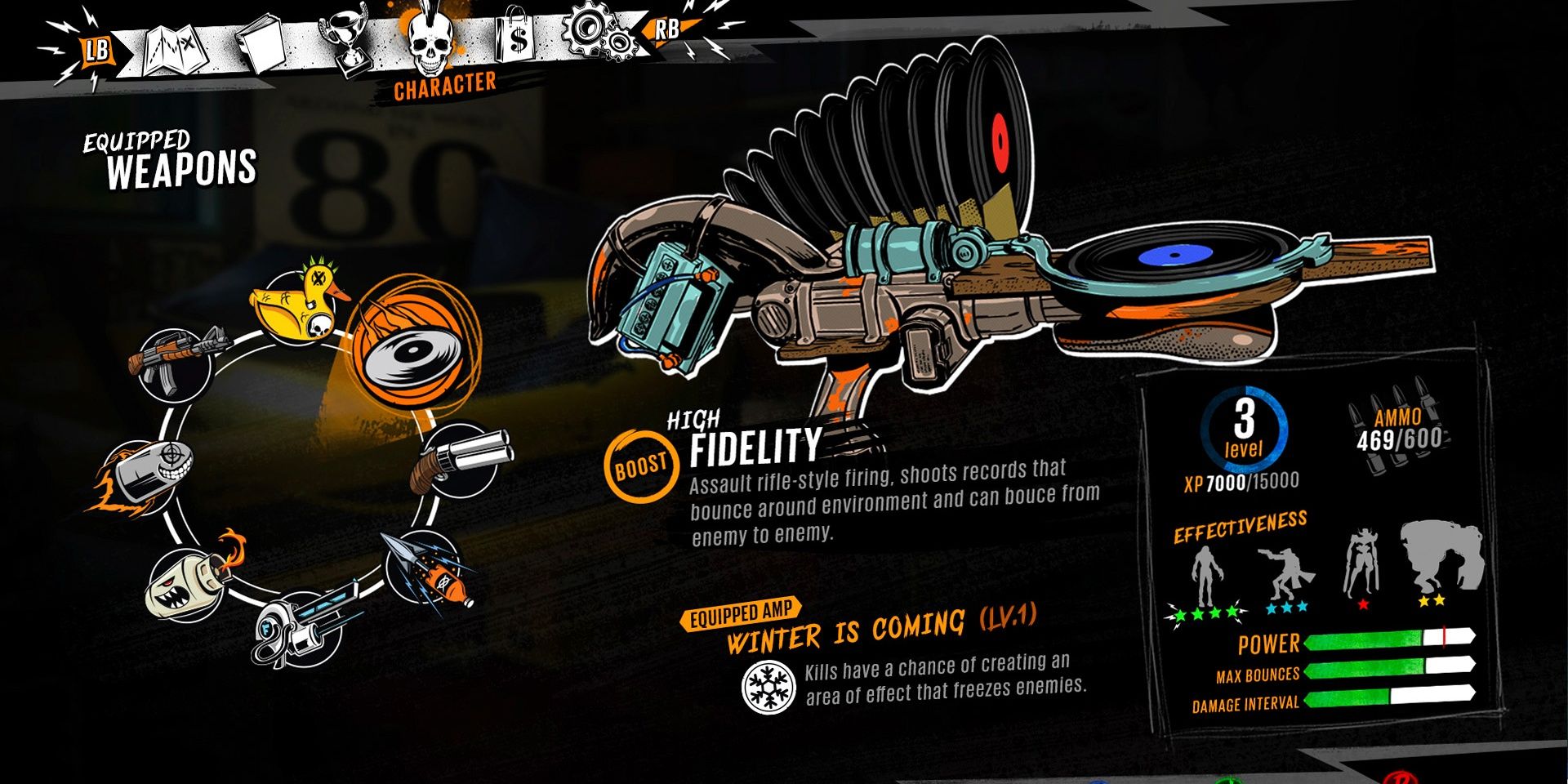 What happened to Sunset City's supply of vinyl? Apparently, they’ve been weaponized in Sunset Overdrive. The High Fidelity is the second weapon you receive in Sunset Overdrive, and it fires vinyl records at an extremely high rate. These projectiles have the ability to ricochet off surfaces and also hit numerous enemies.

Because of its ricocheting ability, the High Fidelity doesn’t require a whole lot of precise aiming and can be effective on the move. A single vinyl record can destroy multiple OverCharge Drinkers, so fire away on an incoming horde. 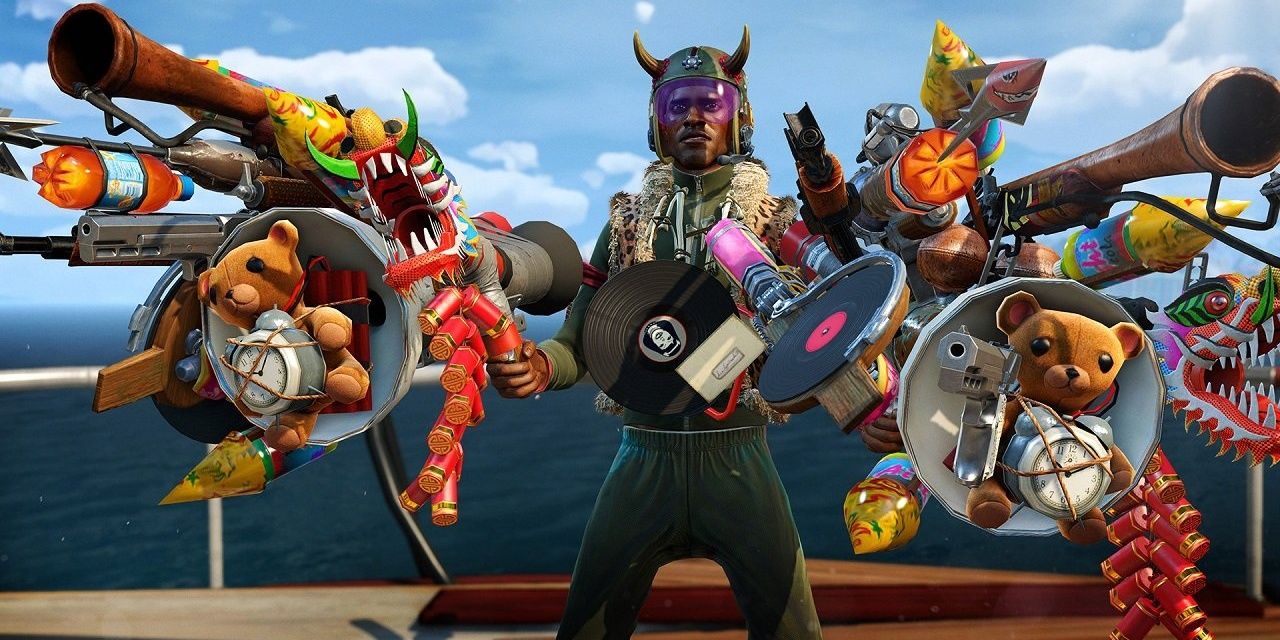 If you had a choice between a regular teddy bear and an exploding teddy bear, which sounds like the better option? This grenade launcher shoots teddy bears that either explode directly on impact or might bounce around a bit between detonating.

Enemies in Sunset Overdrive come in massive waves, so having something that can destroy large amounts of ODs is extremely useful. The TnTeddy has a large blast radius that can hit multiple targets and help disrupt incoming waves of ODs. 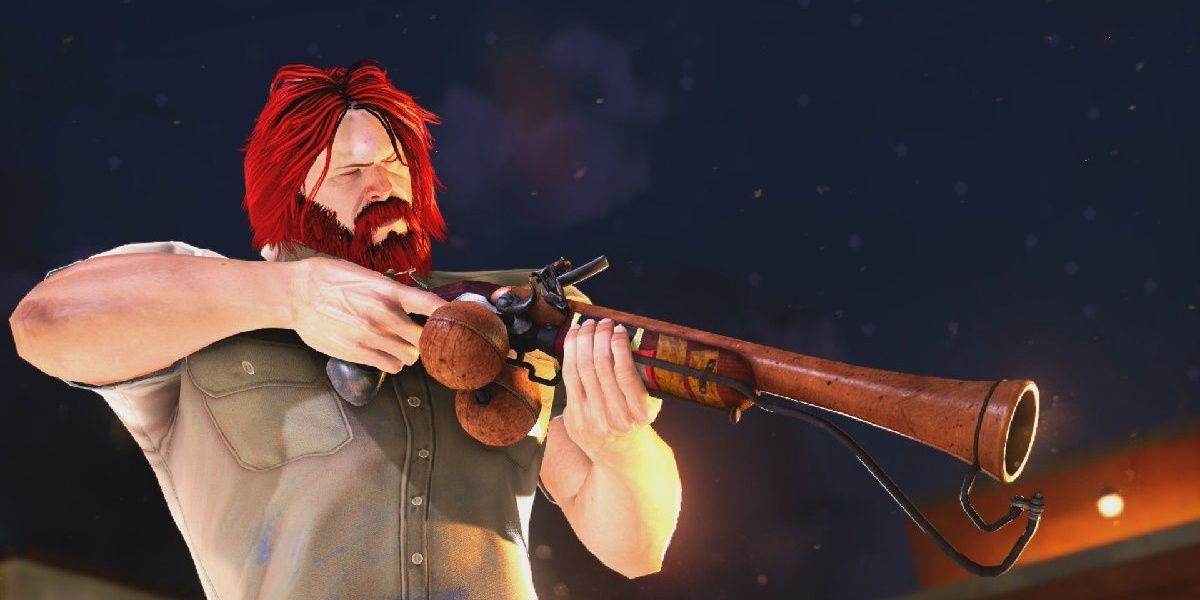 Who says first is the worst? The Flaming Compensator is the first weapon you receive in Sunset Overdrive, and it's a modified shotgun that you’ll most likely use throughout your entire playthrough. The weapon fires a wide bullet spread that applies an aftereffect on enemies and lights them on fire. The Flaming Compensator is easy to aim and is most effective from short-to-medium range.

Mobility in Sunset Overdrive isn’t restricted to simply running and jumping around. There are numerous rails around the city that you can grind on, so having a competent weapon to fire while grinding is essential. Because of the wide bullet spread, the Flaming Compensator is one of the best weapons to use while grinding to avoid ODs.