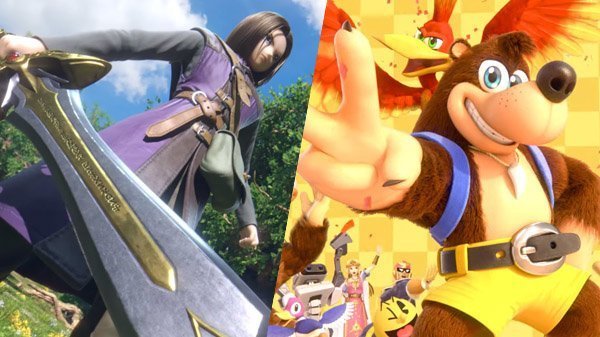 Nintendo sure does love a good surprise release. They revel in the chaos that a stealth drop can cause, probably due to some deep-seated vendetta against us poor writer folk. Sometimes they release games during an E3 conference, sometimes they do so during a Nintendo Direct, no matter what it is or when it is, the people are hyped.

You can see it in the way they tease things for months and months, only to finally drop them out of the blue alongside a random update. Just look at how Joker was released alongside the 3.0.0 update a few months ago, pure anarchy in Super Smash Bros Form. He was seemingly forgotten for weeks on end, only to appear with the update with his music and stage in tow.

Well, it looks as though we could well be seeing something similar for the Hero character. The Hero is the addition from the Dragon Quest series of games, which despite not always finding their mark over here in the west, are huge in the east. It looks like we might be seeing him drop as early as this week, at least according to this post from DualShockers.

The short version is that Nintendo France airs a Let’s Smash video series talking about how to get better at the game. However, the latest video’s description states that it is a special episode coming soon.

According to the translation by DualShockers, the wording is “see you soon for a special Let’s Smash (Someone said something about Heroes?)”.

Given that the Hero is not one singular hero, but actually a whole bunch of them from the main series of games, the “Heroes” part of this message rings especially true. As a new episode of Let’s Smash gets released every single week, we might be able to have our hands on the Hero this week.

Of course, it is possible that we are only getting a bit more information about the character, with the actual release date being at a later time. Even if that is the case, it’s likely that we’ll see the Hero before long, as Nintendo tends to be very tight-lipped when it comes to this stuff. We rarely get big info dumps in advance of new Super Smash Bros Characters, it’s one of the reasons it was so odd to see Banjo Kazooie announced during the same Direct as the Hero.

No matter what the case is, it’s important to remember that Smash Bros is both love and life, and each new character breathes new life, not only into the game but the world itself. That’s some hyperbole right there, but Smash is really good, so I think we can all agree it’s actually just a fair and level-headed assessment of the games importance.