The Tales Of series has gifted us numerous characters, all of whom have incredibly different styles and designs. Throughout the Tales Series, the artists do a great job of not making characters similar to their previous ones, giving each character their own time to shine without drawing too many comparisons.

There's a boatload of characters throughout the Tales Of series, and while some are more memorable and better designed than others, there is no such thing as a dull character when it comes to Tales games. 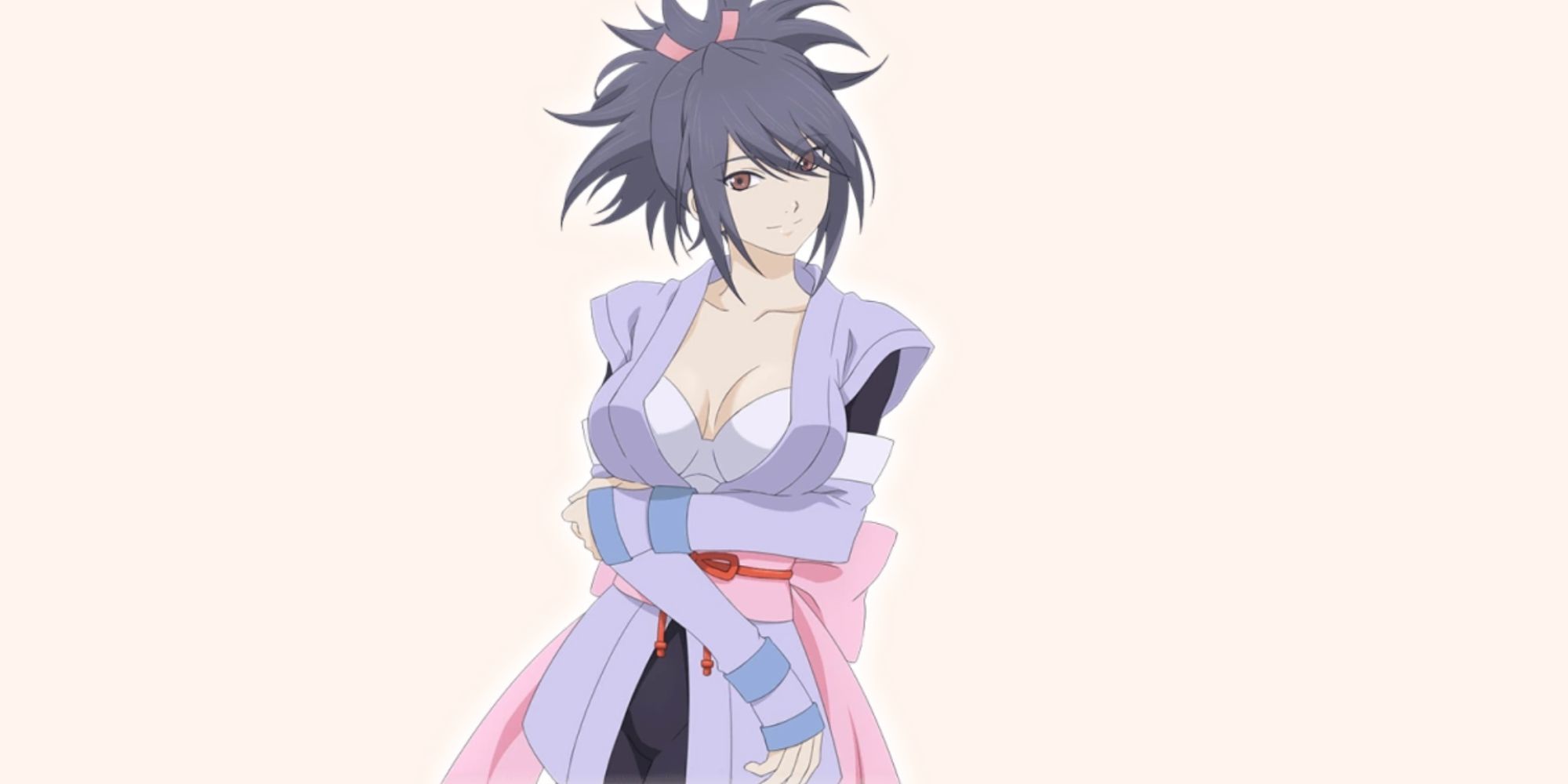 Sheena is one of the main protagonists in Tales of Symphonia. Sheena's understated style and design are one of the best out of the main cast of characters. The subtle pastel notes of her lavender-colored outfit serve as a way to detract from what a rad summoner she is.

The style of her outfit takes heavy inspiration from her upbringing as a ninja, opting for something that looks relatively comfortable and flowy. Suffice it to say it suits Sheena excellently. 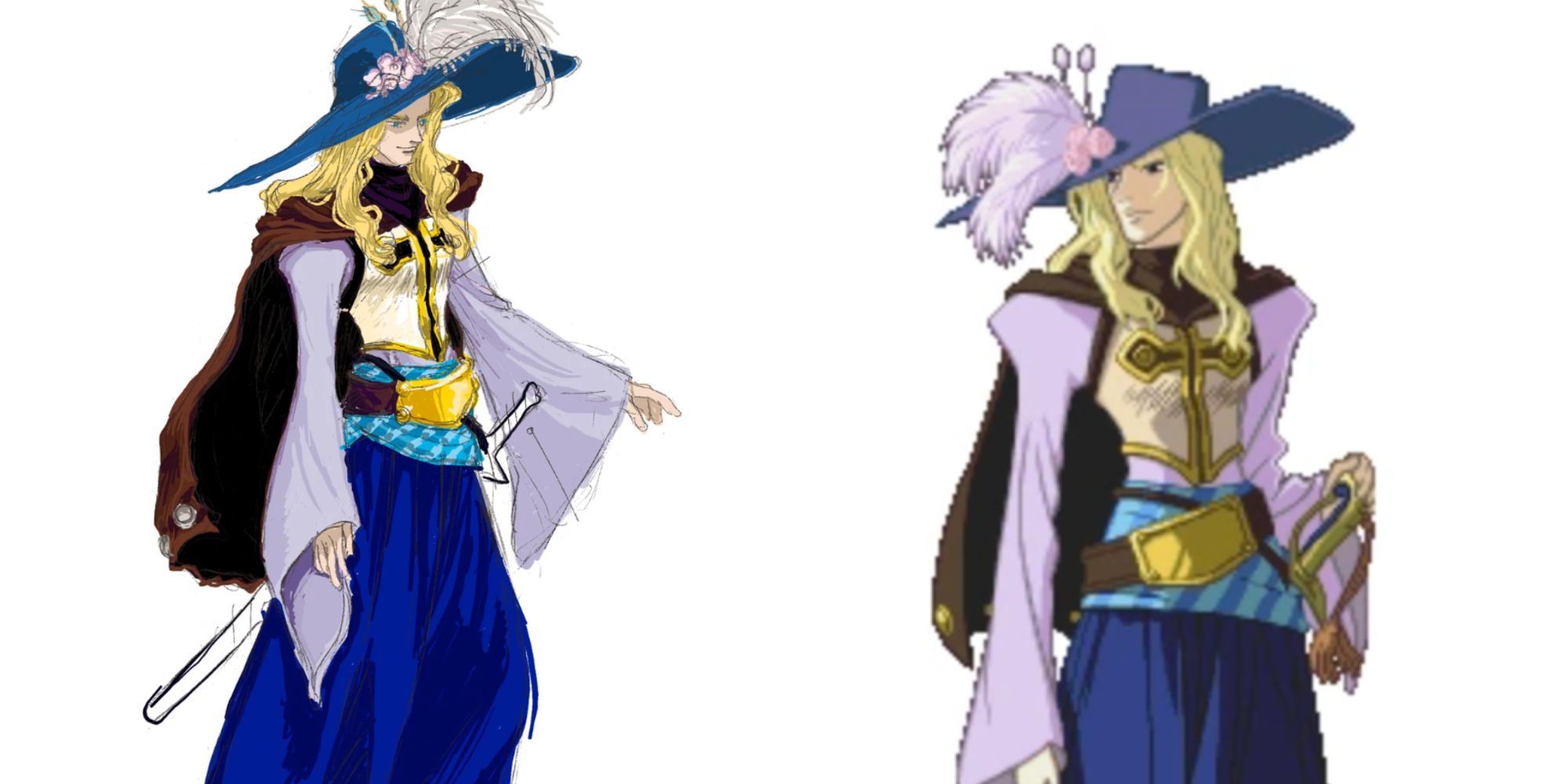 Rassius Luine could easily pass for a Red Mage in the world of Final Fantasy. He's got the fabulous feathered hat, the swagger, and the slender sword to get the job done. His armor and design emphasize his fast playstyle, letting him show off his suave swordplay in combat. Ras's loud and colorful design complements his confident personality.

As a noble and one of the highest-ranking knights in the Empire, his overall design exudes cool. He's so confident he doesn't need proper armor that he instead opts for ornate robes and flowing garments. However, he wouldn't look nearly as cool without his fancy hat. 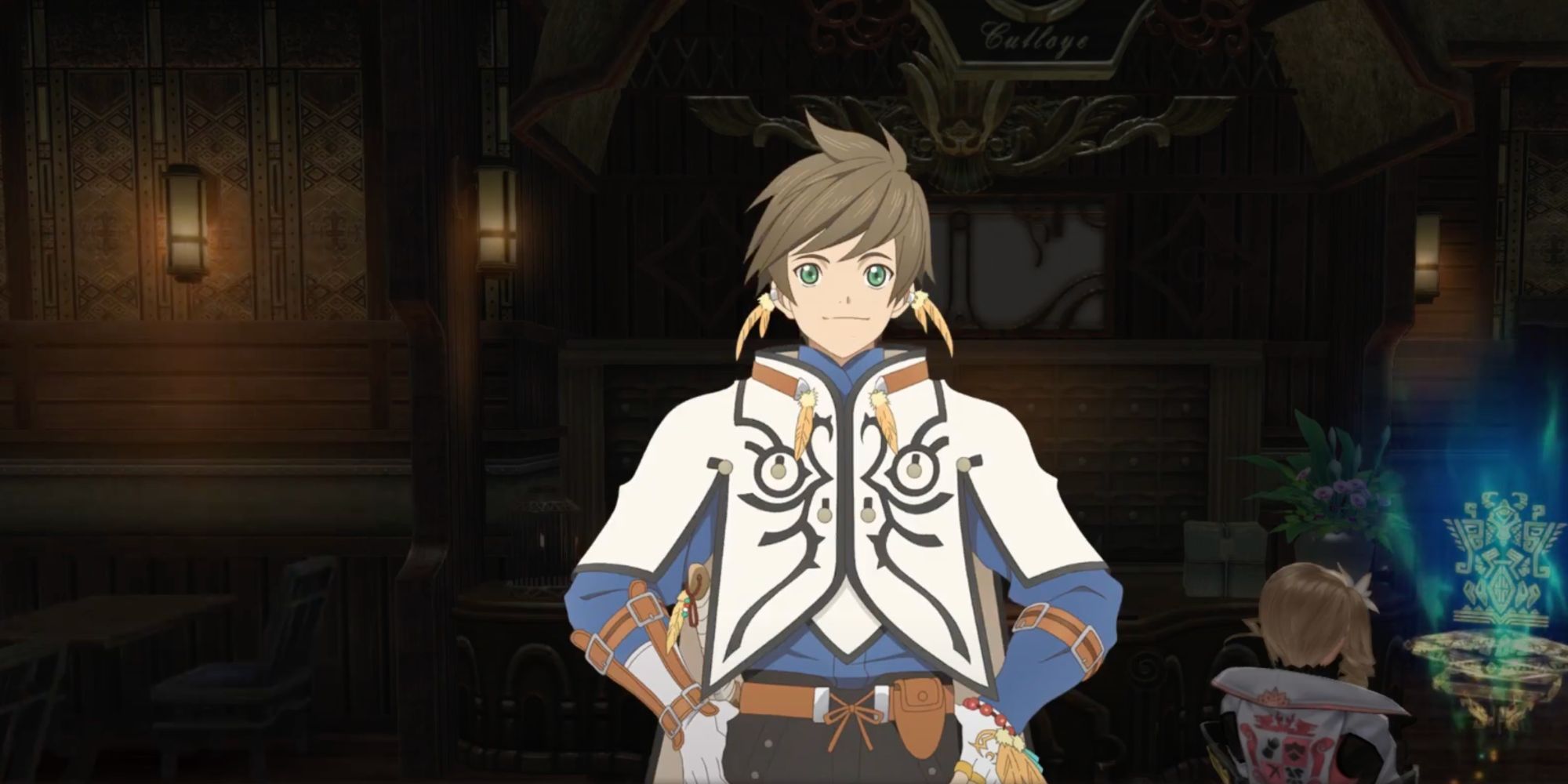 You'll either love or hate Sorey's poncho in Tales of Zestiria, but we think it gives him a Studio Ghibli chic vibe. As far as your Tales main characters go, Sorey is a typical good guy trope who could slip through the cracks, but his design sets him apart fairly well.

There's the simple blue cloth undershirt, feather earrings, and his short, straightforward brown hair. His design features a lot of white and brown, with the brown accents of his gloves and belt striking a pleasing ensemble. But it's the blazing white cloak that makes it. 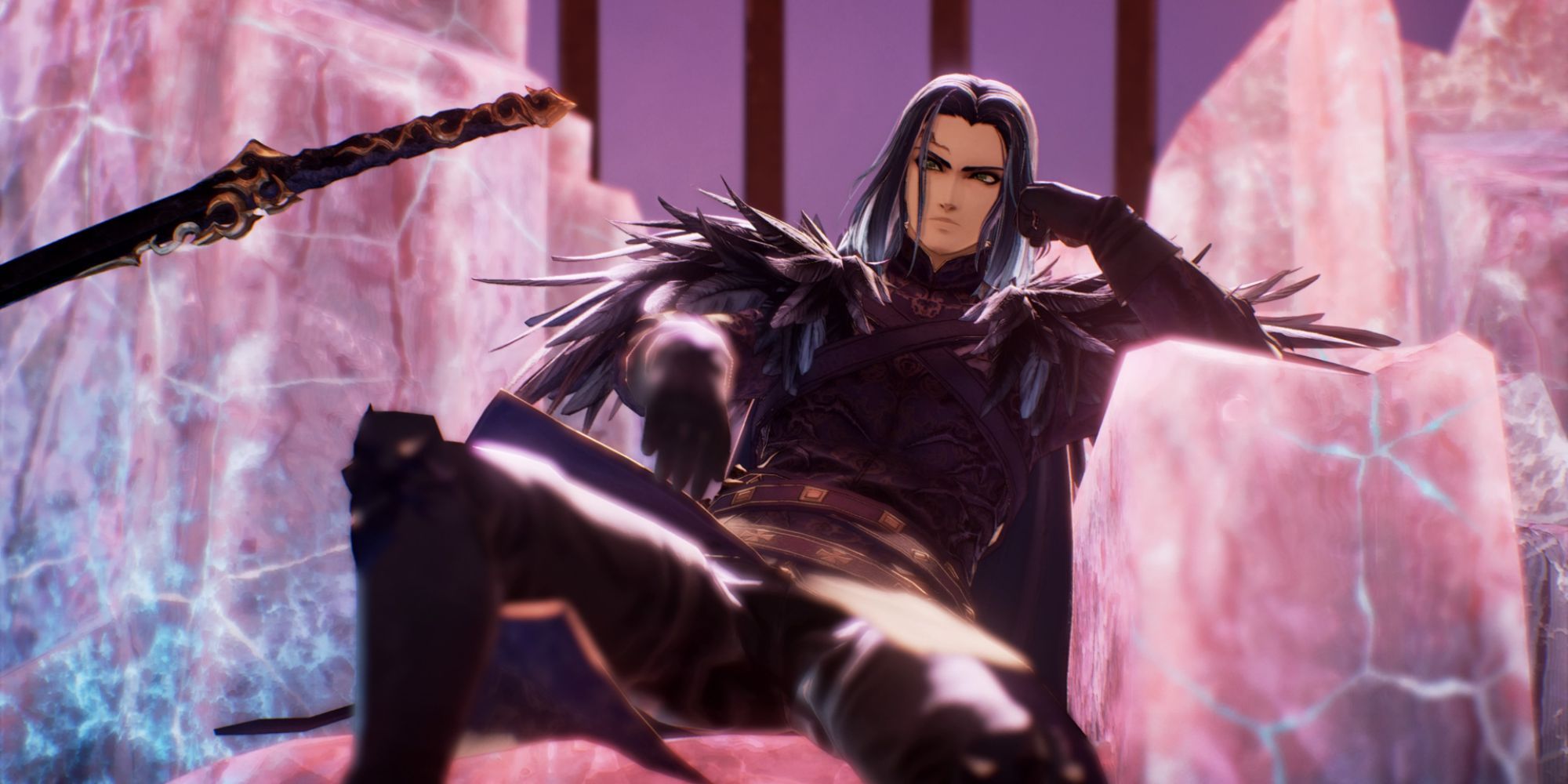 As far as bad guys go, Vholran has more depth than just wanting to mess things up in Tales of Arise. He sees himself as the true Sovereign, seemingly balking at the idea anyone else could fulfill the role better than him. He's got the leather, he's got the hair, and he's certainly got the face for it.

Everything about Vholran screams evil in a very 'Tales of' way that you couldn't possibly mistake him for anything but a pretty villainous dude. His design is cold and icy, which perfectly fits his position opposite Alphen, who is very much associated with fire. 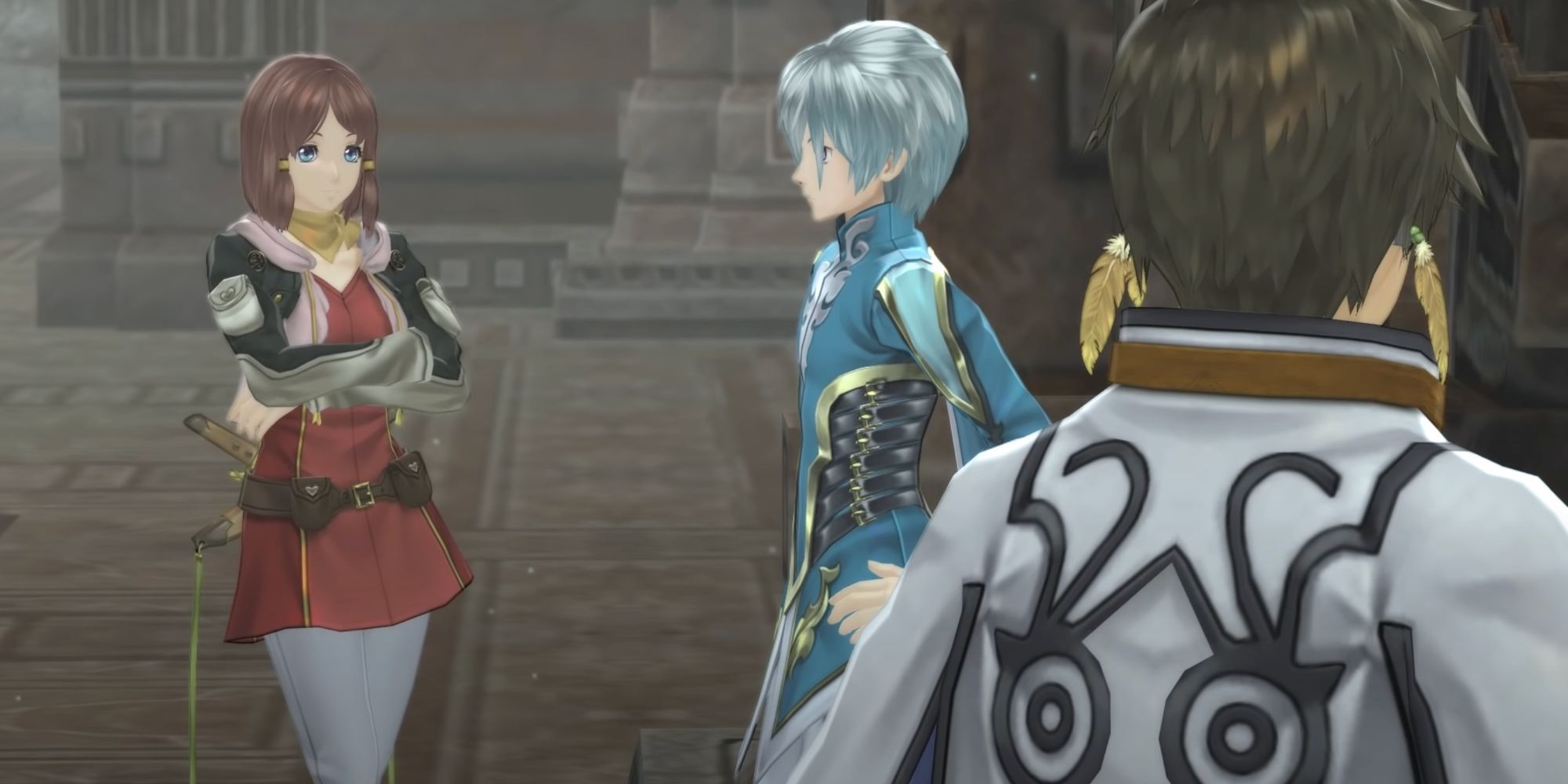 Tales of Zestiria has a lot of characters with designs that are fairly 'out there' in terms of what looks normal or suitable for the world. Rose, like Sorey, captures a wonderfully simple yet effective design compared to other characters you meet in the game.

She has simple leather belts and cloth clothing, a pretty stylish red tabard, white trousers, and twin daggers sheathed on her back. Rose fits the bill of a swift thief-type character, which makes sense considering she's part of an assassin's guild. 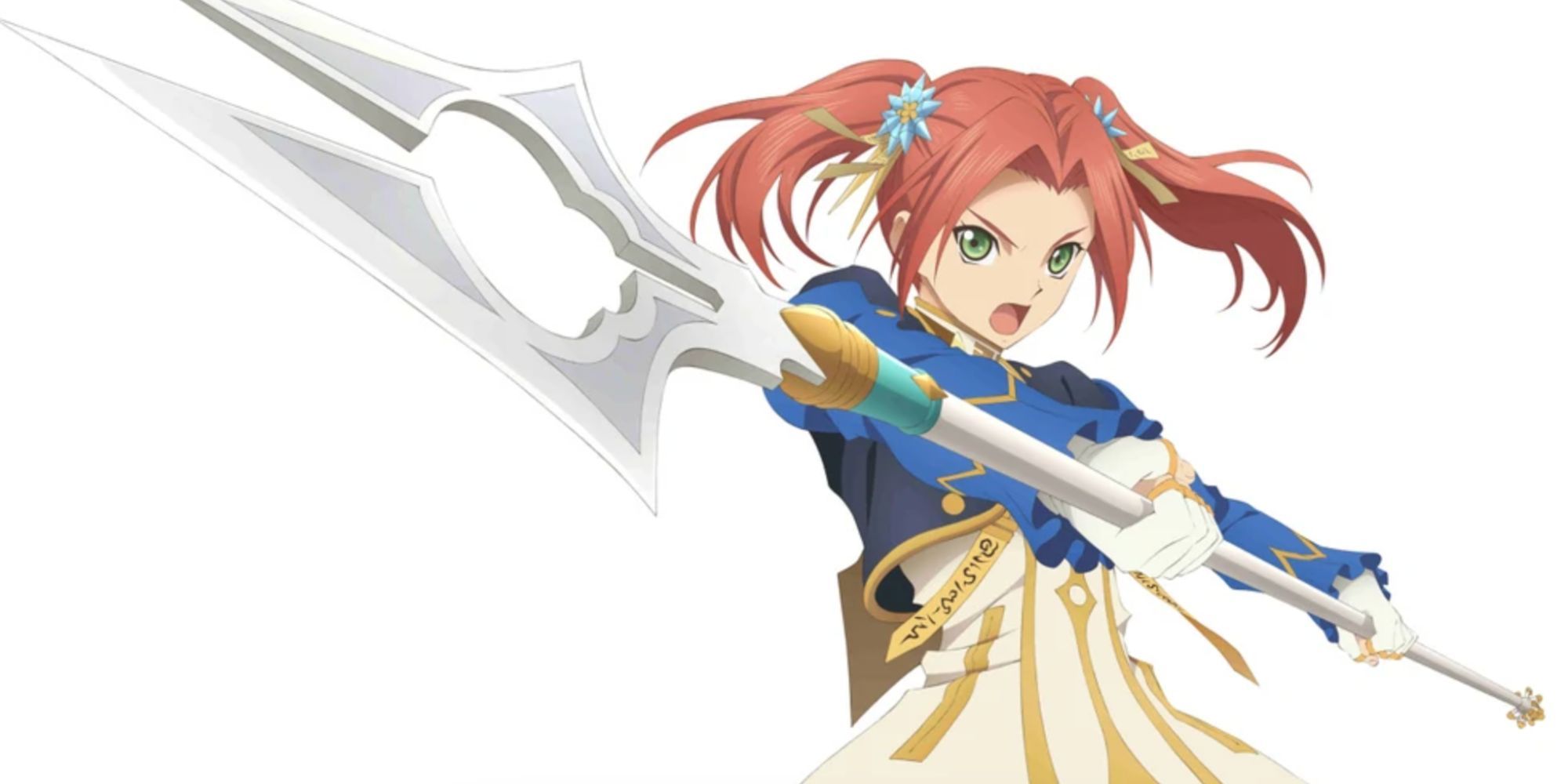 As a member of the Abbey, Eleanor's design incorporates a lot of similarities to other Abbey members we see throughout Tales of Berseria. She sports a dark blue jacket, which is a lovely contrast worn over a white dress with yellow accents and thigh-high boots. Her orange hair and bright, frilly outfit complement her caring personality, but you'd be foolish to underestimate her.

She's a talented exorcist who can throw down with a spear when she wants to. Her design stands out in Tales of Berseria since she's one of the few female main characters wearing normal-ish clothes, especially compared to Velvet's somewhat revealing design. It's kind of mad to think they exist in the same game. 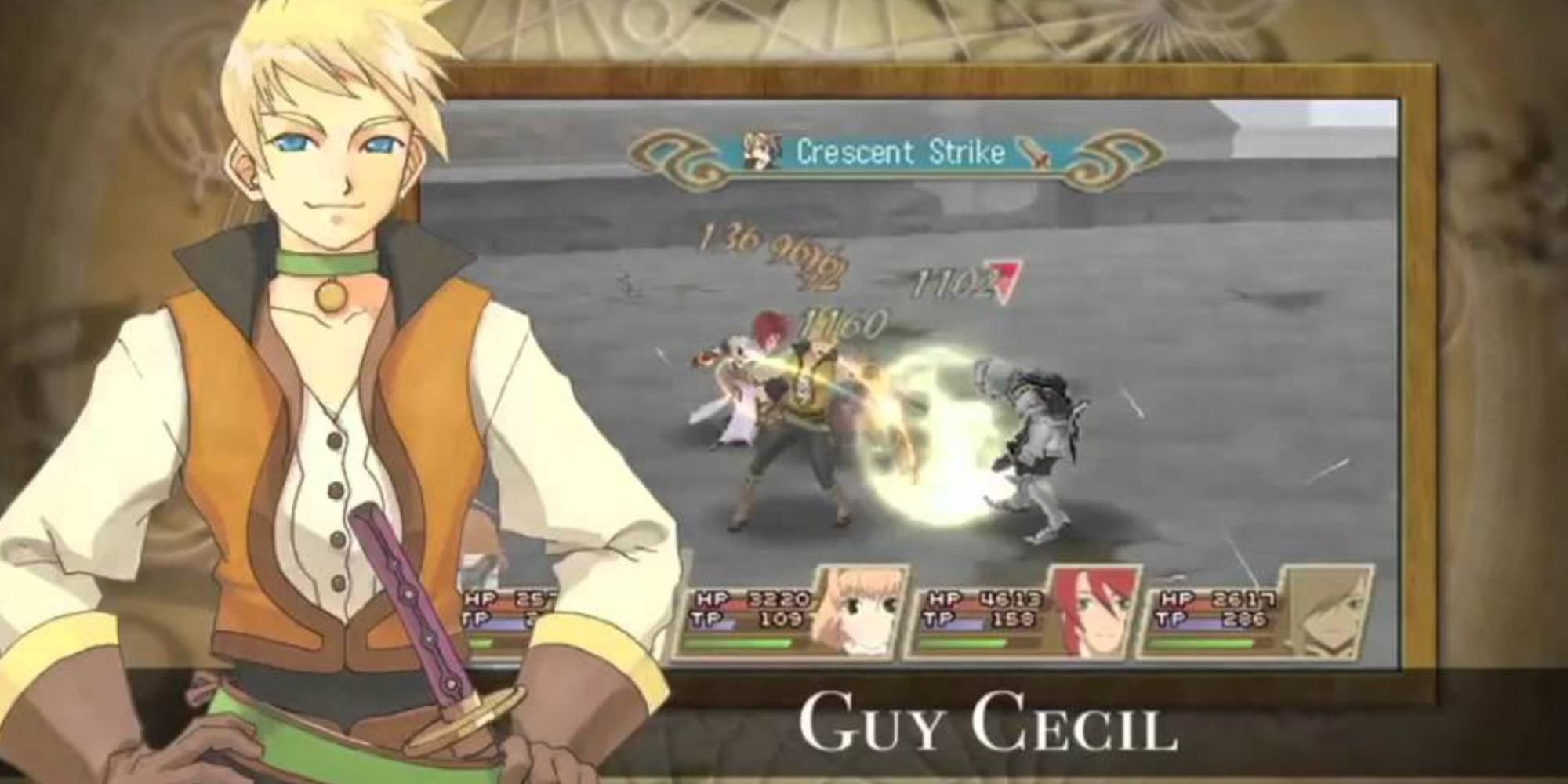 Guy Cecil looks like he could have been a Final Fantasy character in another life and it's the perfect outfit for his character in Tales of The Abyss. While he might be the most stylish servant you've ever seen, Guy is a charming buffoon in Tales of the Abyss.

He has a friendly nature which almost goes against his outfit – which might suggest he's an incredibly sophisticated smooth talker – constantly getting him into trouble with women who misread his friendliness as flirting. 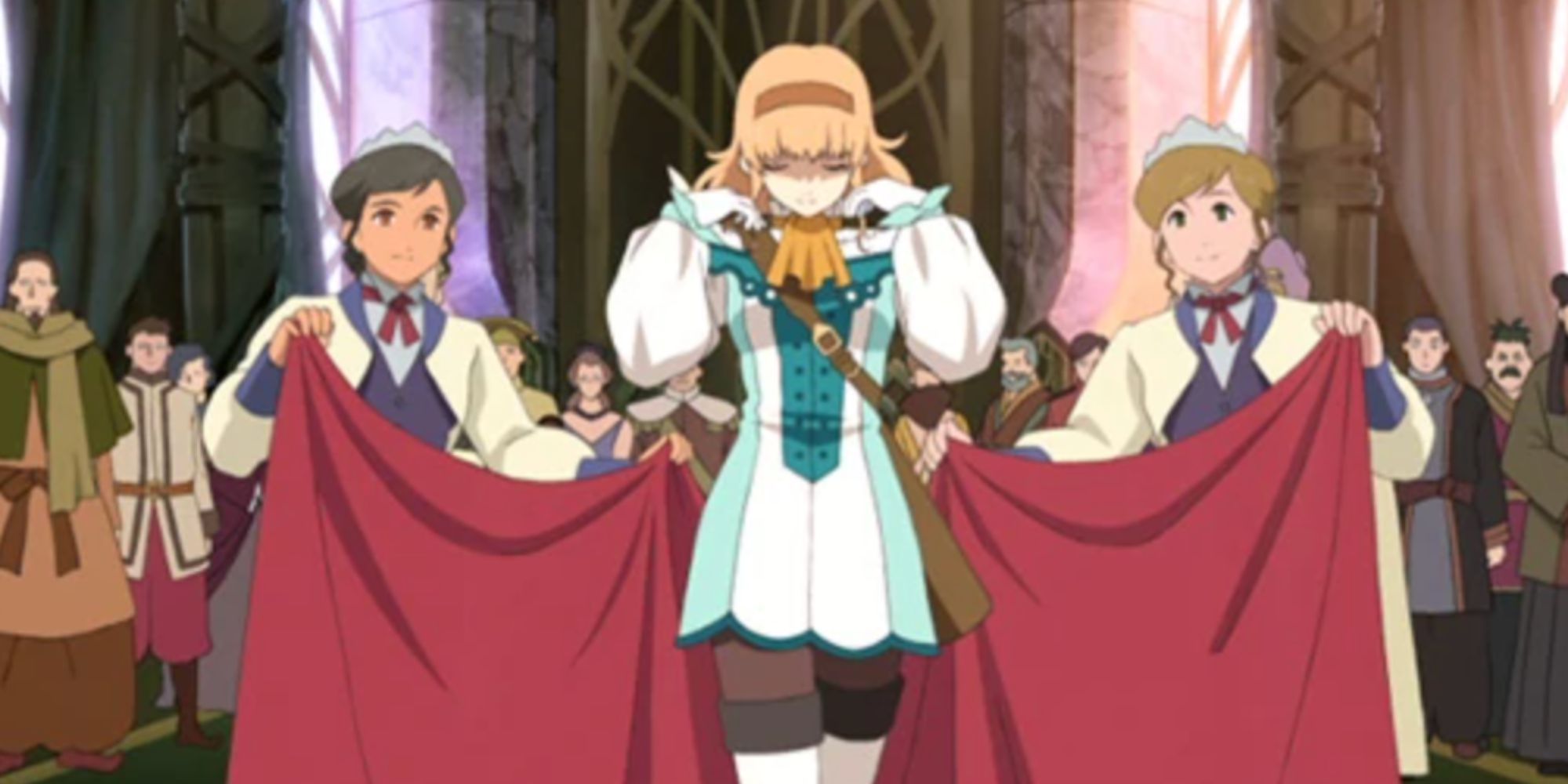 Natalia's design in Tales of the Abyss is somewhat tame compared to a lot of other Tales characters, but it's the simplicity of this that makes it incredible. It's no secret Tales games love a princess character and Natalia is yet another one you'll encounter.

In contrast to someone like Alisha, Natalia's design is much more elegant and screams nobility. It speaks to the entitled nature she has when you first meet her. She has a bossy personality, to begin with, but she learns to open up and treat her party members with respect as the game goes on. 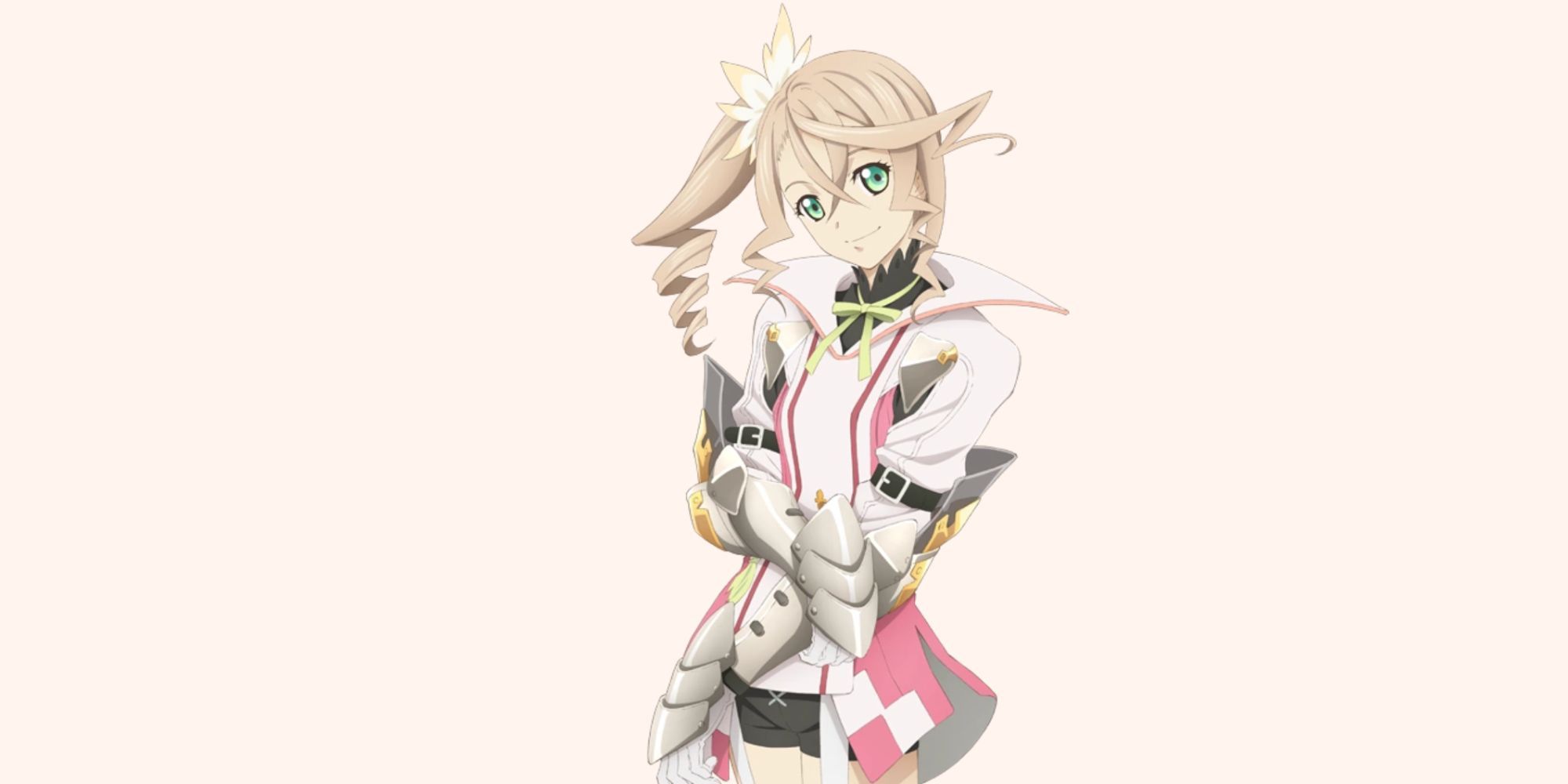 Alisha's design looks similar to the pegasus knights from Fire Emblem, complete with the knee-high boots and the tabard. It's an intense look for her, even with the overbearing white color palette. The pink and green accents go a long way in enhancing her overall design. She's driven and strong-willed, perfectly filling the rebellious princess trope to a T.

We especially love the mixture of cloth and metal in Alisha's outfit, since it creates a nice balance between protection and maneuverability that a fast striker like Alisha would prefer. She's not as frou-frou as some of the other female characters in Tales, and she looks like a stylish princess knight because of it. 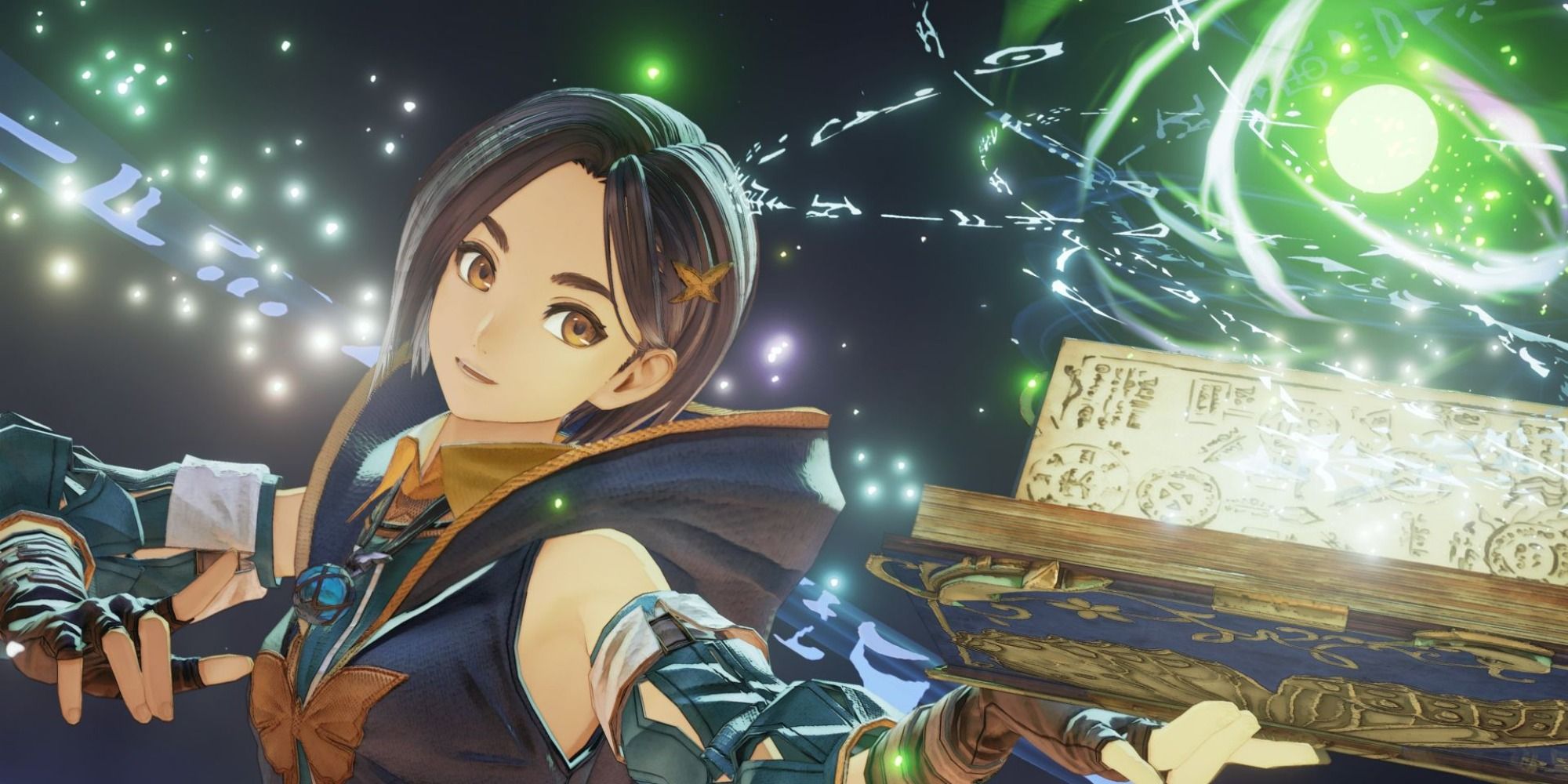 Rinwell is the coolest of cool. Her outfit is suitably mage-like and all she's missing is a full-blown steepled witch's hat to complete the vibe. Even without this, Rinwell's design features such a pleasing shade of blue that is constructed nicely with the yellow of her collar and dark hair.

Despite her one-tone color scheme, it suits her incredibly well that we think Rinwell would look a whole lot worse if she didn't have a uniform, almost constellation-inspired outfit. She might look meek and timid, but she will literally call down meteors on you if you cross her.