Four-player arcade cabinets like TMNT are arguably the most fondly-remembered machines of the arcade era. Two such games, Konami's Teenage Mutant Ninja Turtles and TMNT: Turtles in Time, are among the most beloved of all thanks to excellent use of their license and eye-popping cartoon graphics.Now Arcade1up, maker of 3/4-scale arcade cabinet replicas, released an at-home version of the famous TMNT 4-player cabinet in October (see it on Walmart) and I'm happy to say it rules extremely hard.

The most noticeable difference between the TMNT cabinet and most other Arcade1up machines is its control deck with 4 sets of joysticks and buttons. The games can be enjoyed as they were meant to be enjoyed, with simultaneous 4-player action, each player picking their favorite ninja turtle to wage battle against the Foot. Because of its 4-player design, the control deck sticks out considerably on either side of the cabinet when compared to the other games, but it's not distracting or awkward.
While it does protrude on the ends, the experience of playing with 3 other people simultaneously doesn't lose anything in the smaller-scale replica. It's intimate, that's for sure, but it doesn't feel crowded. We played it as a family unit and even with a lefty in the mix, we never got in each other's way.Unlike most of the other Arcade1up cabinets, the TMNT cab ships with a custom riser included in the box. This adds a little more to the price versus other cabinets, but as I mentioned in my Mortal Kombat Arcade1up review, the riser is a blessing as a tall person. Without the riser, the cabinet is comfortable enough for seated play, but that's not conducive to 4-players without the riser. The included riser has custom Ninja Turtle-themed art, so it adds a little extra flair to the completed unit.
The cabinet itself is emblazoned with the art from the original 1989 arcade game, which I personally prefer over the art from Turtles in Time. The marquee lacks the light-up feature of some of Arcade1up's other premium cabinets, but it's a worthy tradeoff for the 4-player control deck. Assembly is no more complicated than a store-bought bookshelf, and I was able to complete the process, from unpacking to switching it on, in under an hour by myself.
There are a pair of speakers located below the marquee, and they provide great sound. The Mortal Kombat Arcade1up had a three-position switch for volume: off, medium, and loud. The TMNT cabinet, on the other hand, has a volume level that goes all the way up to 14. Using the volume control pops up a display on the screen reminiscent of the volume display on an old CRT television. I really like having the wide range for the volume selection and prefer it a lot to the MK's two-setting single speaker set-up.
Speaking of sound, TMNT die-hards will notice the theme song on the Arcade1up cabinet is slightly different than the one from the cartoon or original arcade machine. It's the classic TMNT theme, it's just performed by a different artist than the original. Honestly, if I hadn't stumbled across an online discussion of the difference, I probably wouldn't have noticed at all.

In spite of the small change to the theme song on the attract screen, the games play exactly as I remember them. They're still extremely fun and they look great. The 17-inch LCD screen is bright and vibrant and doesn't suffer from any ghosting or other negative visual effects. The dual speakers are punchy and sound great, even at maximum volume.
Initially, my major concern with the TMNT games versus the first three Mortal Kombat games on the MK cabinet is they'd lose something in the translation from arcade to home. Side-scrolling beat 'em-ups were designed to gobble quarters, whereas with enough practice you could hold down a fighting game all day on a single quarter. My concern was losing the quarter-munching requirement would make the Ninja Turtles games seem a little too easy.I'm happy to say, even with infinite continues, TMNT and Turtles in Time are still a blast. The fact you can squad up and play through with three other Turtles makes it even more fun than previous releases, like Xbox 360, especially with the arcade-style controls.
The controls themselves are fine. They have ball-top joysticks and arcade-style buttons in colors corresponding to the turtle they control. They feel roughly equivalent in quality to my old arcade fight stick, meaning they're completely adequate. They don't feel bad or cheap, but they don't feel like the hardware you'd find on a genuine arcade cabinet. They're squarely in the middle. 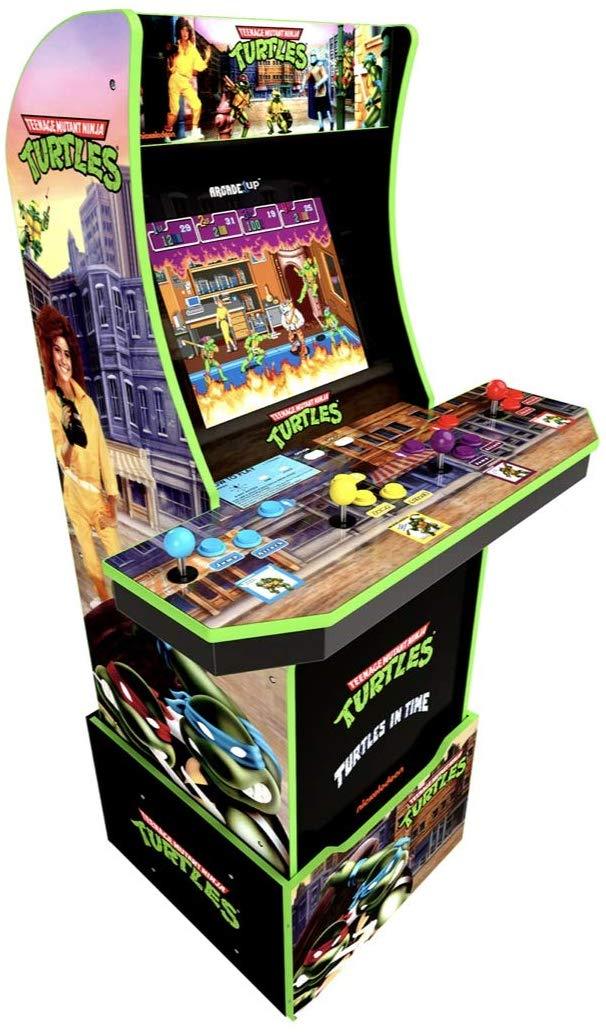