“Can a computer make you cry?” Only 40 years ago that was a revolutionary question, a bold statement of intent for the nascent video game industry. Imagine telling those pioneers, those early developers who so fervently believed in the power of this artform, that in 2019 a Tetris game could have that level of emotional impact.

Hell, I can hardly believe it myself.

Tetris Effect is so much more than its namesake though. Sure, it’s a Tetris game at heart. Blocks fall from the sky and you’re left to arrange them in neat little rows, with completed rows vanishing into the ether. Same as it’s been for 35 years now.

But you don’t come to Tetris Effect to play Tetris. If that’s all you’re after, there are a million different ways to do so for cheaper. I’d recommend Tetris 99 on the Nintendo Switch, having spent many days glued to it earlier this year, but it’s just one among many. A quick Google search will no doubt uncover a cavalcade of readily accessible knockoffs.

You might as well ask why people go to concerts when they have the album at home though.

That’s the difference, as succinct as I can put it. Sure, they’re the same songs. Sure, you can have a great time listening to music in your room, or in your car. Maybe even on the subway.

When the bass drum kicks in though and you feel it thumping in your chest, when the guitars roar out at deafening volumes, with the lights flashing and whirling around and the band so close you could reach out to touch them—it’s an entirely different experience. You aren’t just listening to the music at a concert. 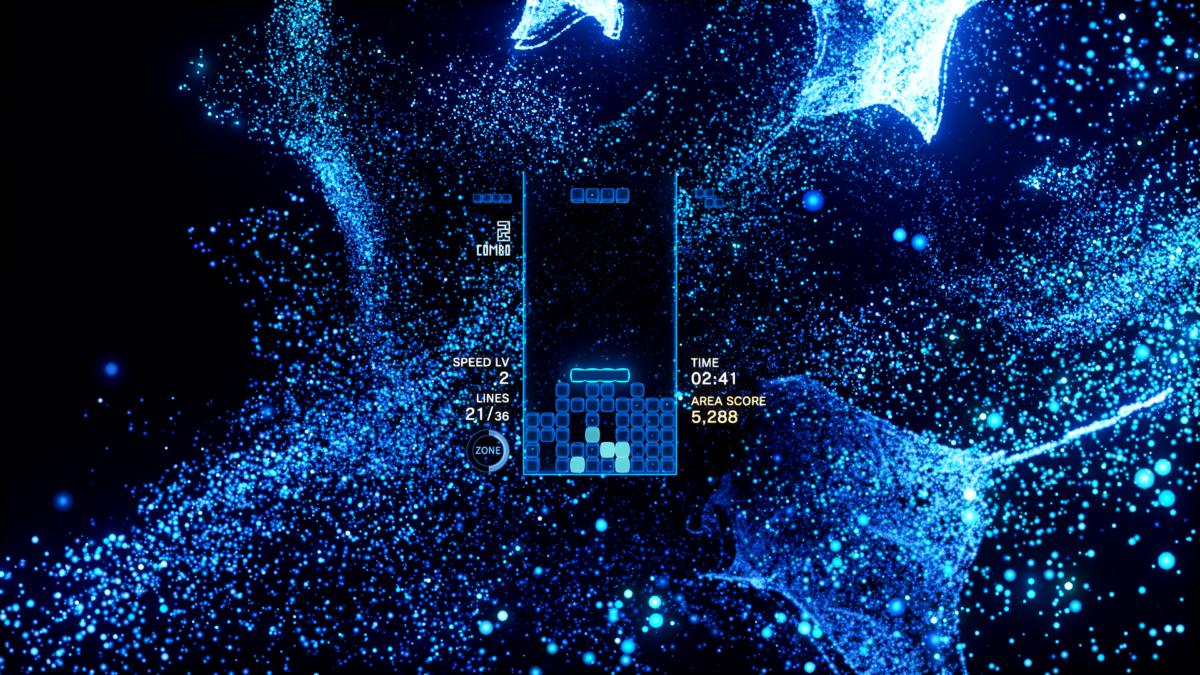 Nor are you simply playing Tetris here. You’re being consumed by it, or perhaps subsumed by it, as the music and the visuals wash over you. The main mode, aptly titled “The Journey,” is an exploration across 27 levels, 27 different mood pieces, each meticulously themed.

The first, for instance, is dark—at the beginning. Then as you clear your first lines, light appears. Glowing manta rays swim through the ocean depths, particles bursting forth in time with the beat. And it keeps evolving from there, space whales soaring past a vision of Earth as a plaintive voice cries out that “We’re all connected in this life.”

It’s difficult to write about. More than most games, I think. Described in words, Tetris Effect sounds silly—like Tetris played over a Winamp visualizer or something. But it’s more than that, just as it’s more than mere Tetris. 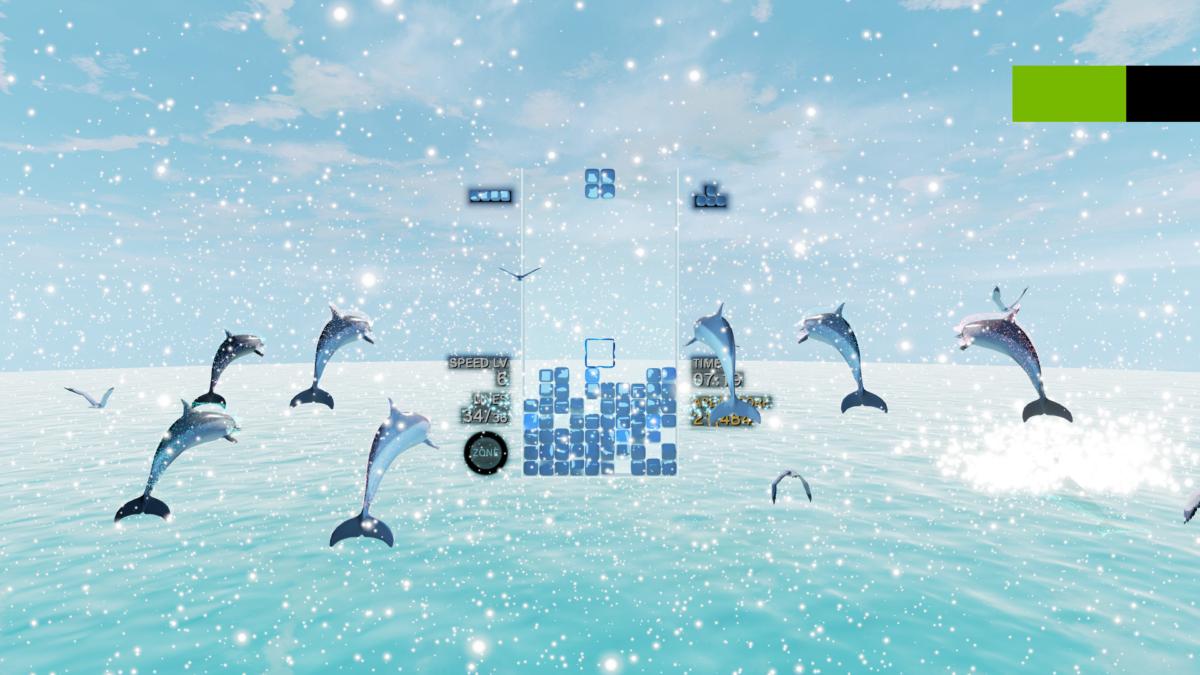 There’s one level in particular I think is a perfect showcase. It’s ostensibly themed after New York City, with neon lights and traffic and towering skyscrapers. The music is all user-generated at first though, each movement or rotation resulting in a smattering of off-kilter piano notes. As you play Tetris, you sort-of naturally create freeform jazz.

That’s far from the only level that made me change how I played to accommodate the theme. It’s only the most obvious, and the easiest to explain. Others were less concrete, like enjoying the wooden thock of gears connecting in the “Da Vinci” level, or the crunch of snow on “Aurora Peak.”

It’s an incredible experience, all told. Not every level is a winner, and there are a few I rush through whenever they pop up. The majority are wonderful though.

Play it in one sitting, if you can. It’ll take you maybe two or three hours to go through the whole Journey, and that’s the way it should be done. Give yourself time to settle in, to meet the game on its level. Let it be a meditative experience. 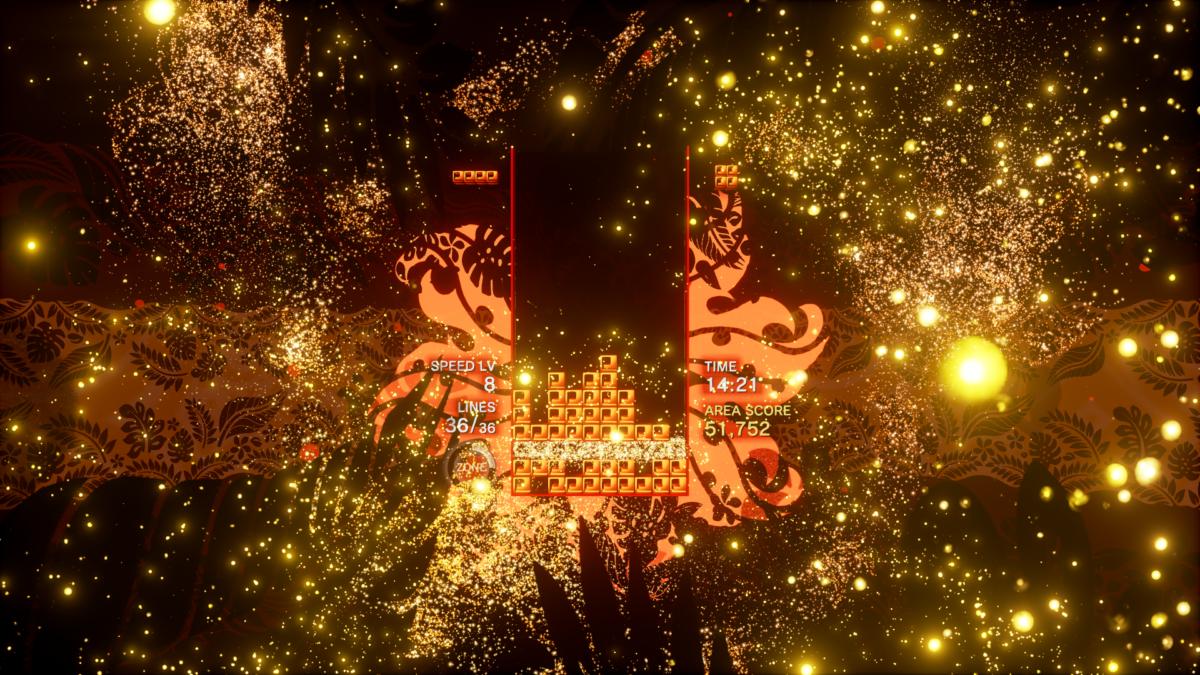 You may think I’m joking, that I’m overstating the effect Tetris could have. And hey, maybe it won’t have the same effect on you. It’s possible. By the time I reached the last stage, and heard the first stage’s “We’re all connected in this life” echoed by “Look at this world we’re made for,” I felt like I got it though.

What is it? I don’t know, really. But I came away from Tetris Effect feeling like I’d brushed up against some universal truth, that for two hours or so everything made sense. And that’s the appeal of Tetris, right? Bringing order to chaos. Tetris Effect extends that feeling—deserved or not—to the totality of human existence.

Tetris Effect is gorgeous, and I only wish it cost less so that people wouldn’t see $40 for a Tetris game and scoff. It’s not that it doesn’t deserve $40. Quite the contrary. It’s merely difficult to convince people.

I hope you’ll give it a try though—especially in VR, if you have the capability. Tetris Effect works with both the Oculus Rift and Steam VR, and it’s even more affecting when you’re completely submersed in it. A monitor is still plenty powerful though, and I’m glad that Tetsuya Mizuguchi got to revisit the ideas behind Lumines, only with the benefits of 15 years technology advancement and the actual Tetris license this time. It’s a better game on both counts.

“Can a computer make you cry?” If anything, the surprising part is how often it can—and in the most unexpected ways.