Nier: Automata has as many endings as there are letters in the English alphabet. For a video game, that is a ton of endings. However, some are definitely better than others. Some of these endings are unlocked just by leaving a boss fight, which is obviously more of an end-game scenario disguised as an ending.

Some endings are a must-get as they are actual endings to the whole story. Others are just kind of creative, silly, and worth seeing anyway. There are many guides to see how to get all the endings, but if you want our advice, these endings are the best and worth getting. We will, of course, rank them from lowest to highest, which highest being the last one on the list.

Updated January 22nd, 2021 by Jessica Thomas: Nier: Automata has become one of the most critically acclaimed action RPGs to come out for the PS4. After the massive success both overseas and in Japan, a remake of the Nier game that started it all, Gestalt is due to release in March. While players are waiting, though, there is no better way to celebrate the series than by doing another playthrough of Automata to experience all the endings. The game’s deep story will bring tears to the eyes of new players, while the wacky joke endings will get a chuckle out of veteran players. There are a ton of ending in the game, but these are some of the most interesting ones you can find. 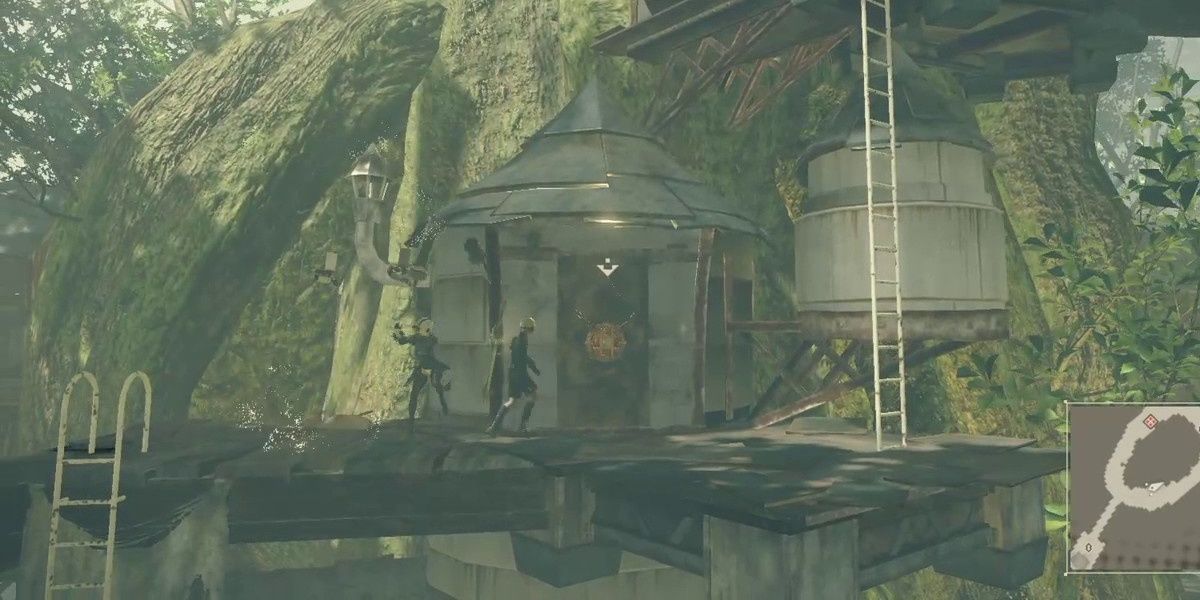 Unfortunately for a lot of endings, you need to steel your emotions. That is definitely true for ending N, where you have to kill every machine in Pascal’s peaceful village.

This cruel ending in on the list because it is a good challenge for players. Also, the in-game text for the game is pretty haunting. It says, “A village of peaceful machines was wiped out through the actions of one deranged android. Thus did the peaceful machines go extinct. Their village is now a haunted, forbidden place. Those who wander too close can hear the mad sounds of an android‘s laughter.” 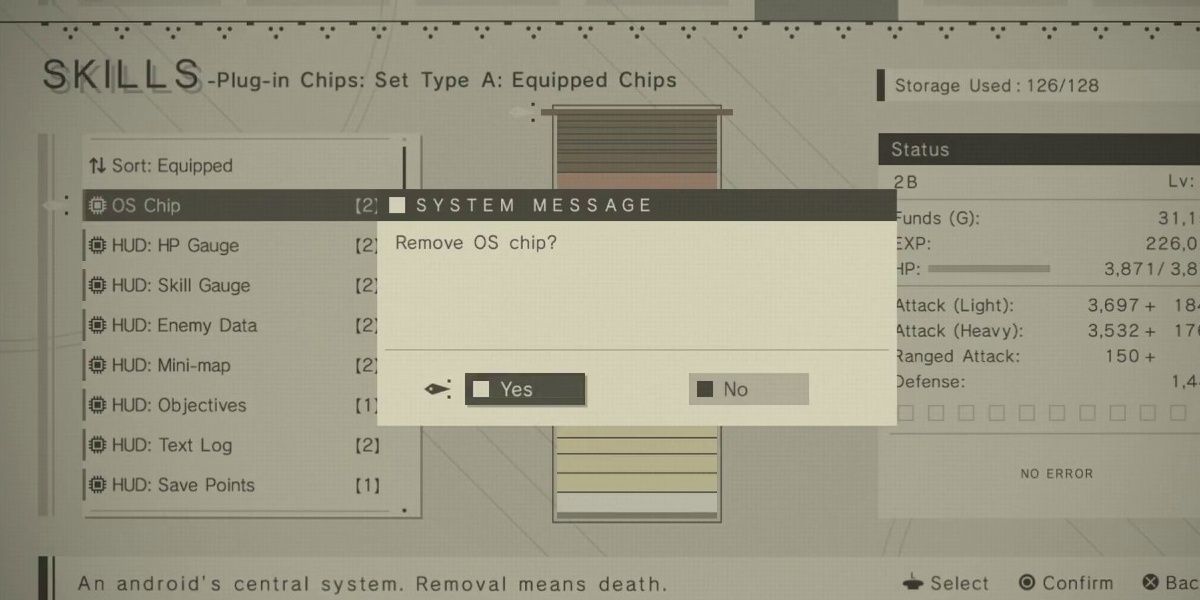 This is one of the easiest endings to get in the game since it can be done at almost anytime. Basically, it is just getting rid of an item in your inventory. However, you are an android and that item is basically essential to your function.

Despite that, the game gives you the option to remove the OS chip and even make it sell-able. If you remove it from your inventory or sell it, you get ending T since it renders you non-operational. Fun! 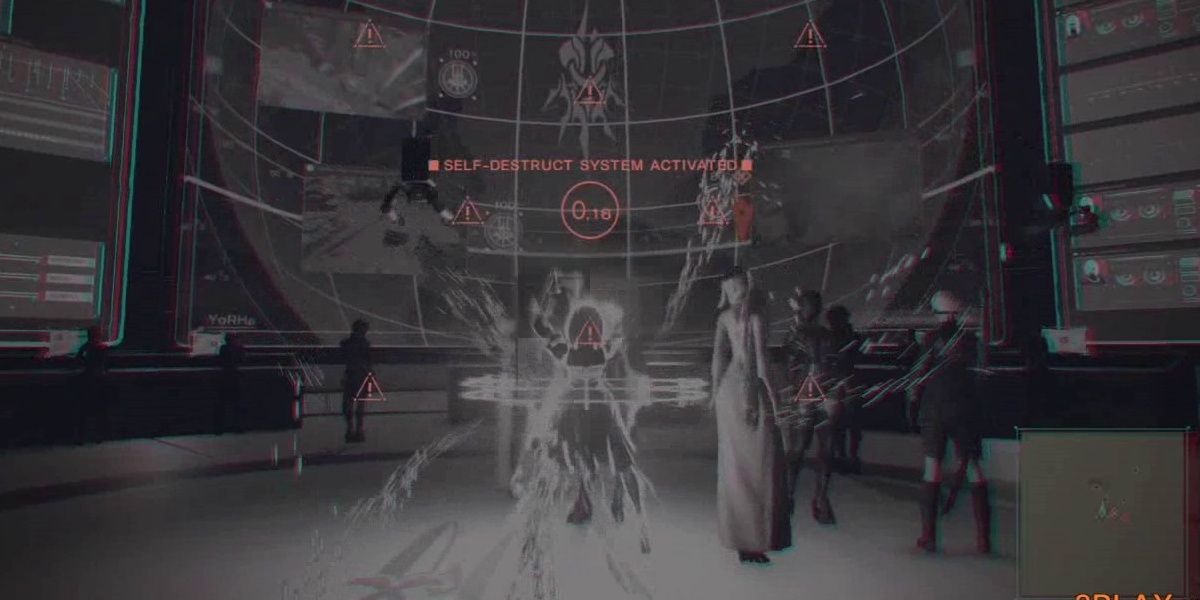 A fun mechanic of the game is that you can self destruct anytime. You are left with fewer clothes and one hit point, but it sure is fun! In fact, the developers thought so as well and gave 2B a ton of power over the Yorha base.

If you choose to self-destruct in the Yorha space bunker though, you will get more than you bargained for. Instead of having fewer clothes and one hit point, you get ending U. The game text says, “By self-destructing at the Bunker, the entire structure ended up exploding in a spectacular fashion. But hey, it sure did look pretty from Earth!”

7 Ending A: Flowers For M[A]chines 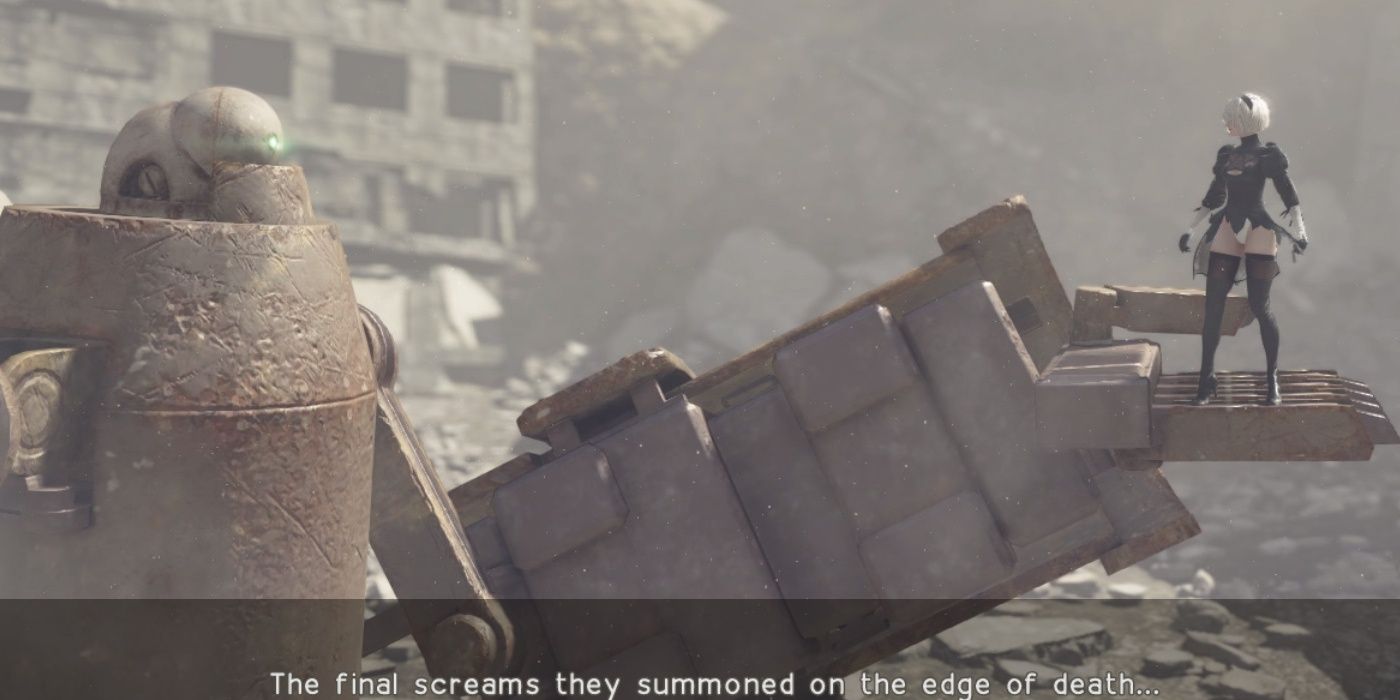 Ending A is pretty basic, but a must if you want to eventually get to the more gritty endings. All you have to do is beat all the main story quests for the first time. You know, like any ordinary game.

If you are unfamiliar with Nier though, do not think ending A is the end-end. By getting this ending, you have unlocked the chances to get endings B, C, D, and E. That part of what makes it get on this list. It unlocks the possibility for other endings and to go further into the story. 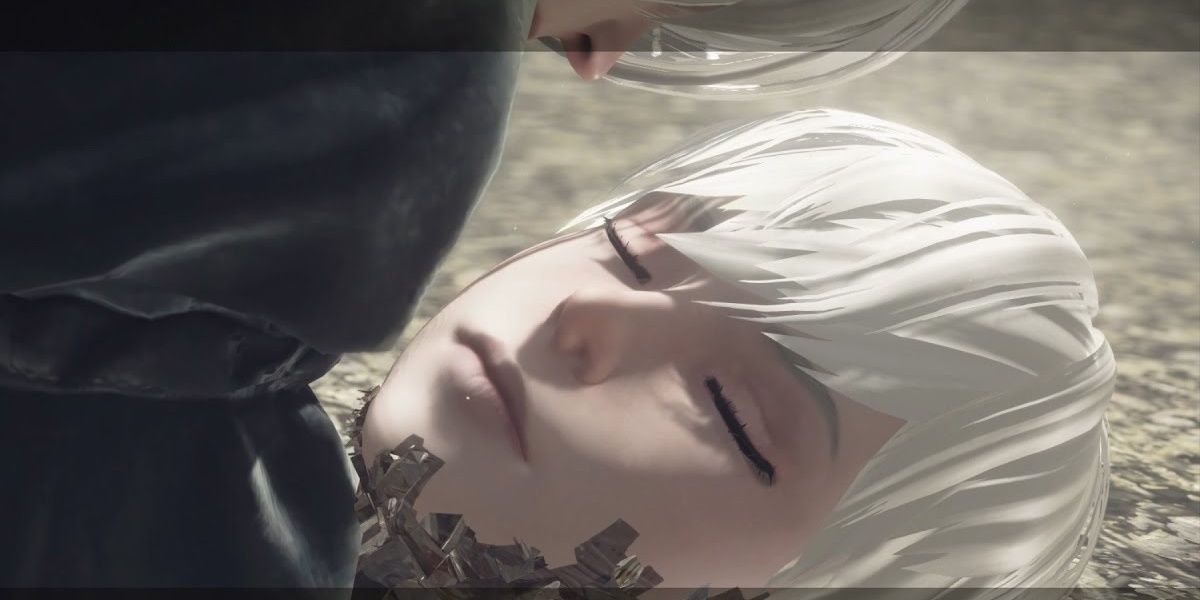 After getting ending A, you are bound for ending B, which will unlock ending C and D which will eventually unlock ending E. Unfortunately, it’s a lot like ending A content-wise. The way to ensure that you are on the right path, watch to after the credits to see if there is a preview at the end that depicts what’s to come in the second half of the game.

However, it is necessary to get the other endings. Getting it is as easy as getting ending A though. All you have to do is beat the main story again. 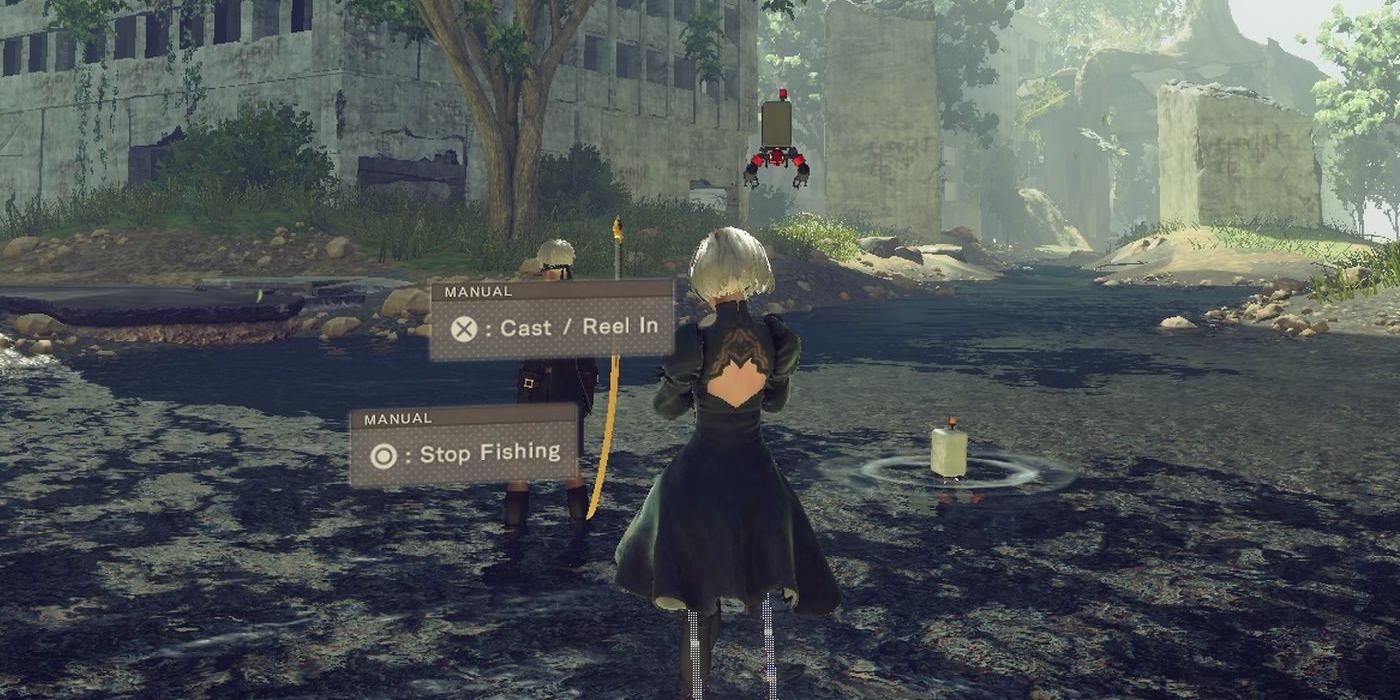 Ending K has made it on this list since it’s basically become a meme just due to how weird it is. You can access this ending by completing a quest for an NPC named Jackass. Jackass sends you an email and you meet her near the desert. All you need to do is find a mackerel along the way to ensure that you can complete this ending without issue.

You find out that she wants you to eat a mackerel. She has heard it can kill androids and wants to see what happens if you eat it. Well, if you eat it, you die and you get ending K. Turns out Jackass was right. 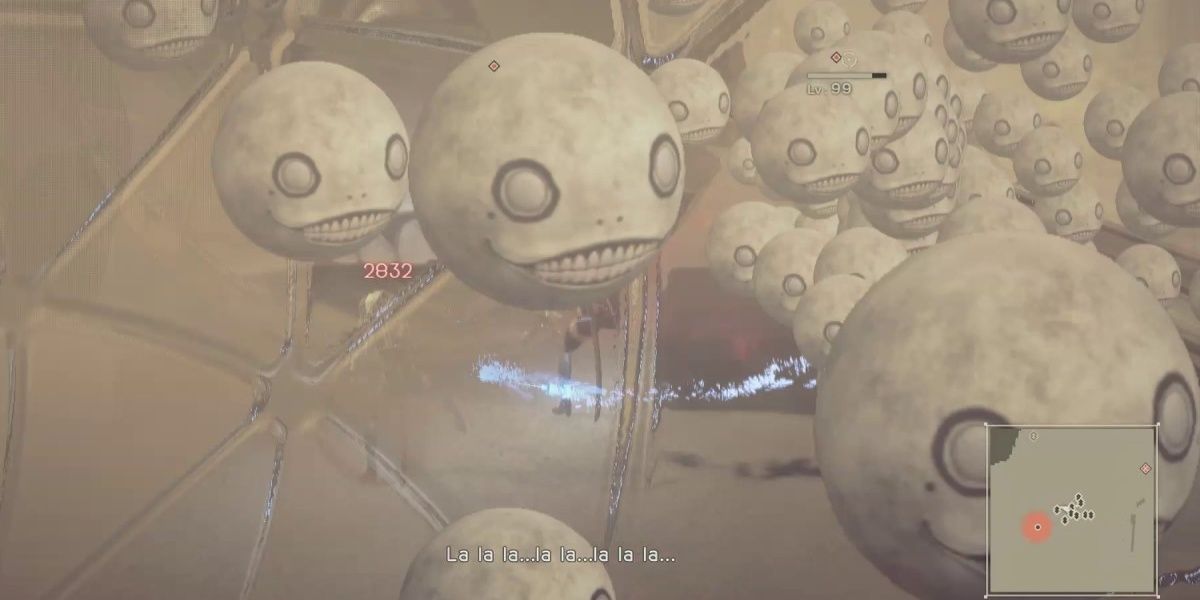 Do you want to fight a secret boss? Of course you do! Not only do you get to fight Emil, but you also can get access to ending Y which blows up the entire planet. Which pretty much makes the rest of the plot null and void.

To get this, you need to receive the quest “Emil’s Determination.” It takes a lot of work to get this quest. You need to complete the quest “Emil’s Memories” and find all the weapons and upgrade them to their maximum level. Once you do that, you can get the quest by talking to Emil in the shopping center. To get the Y ending, you need to let him self-destruct in the fight. Make sure to save before the fight! 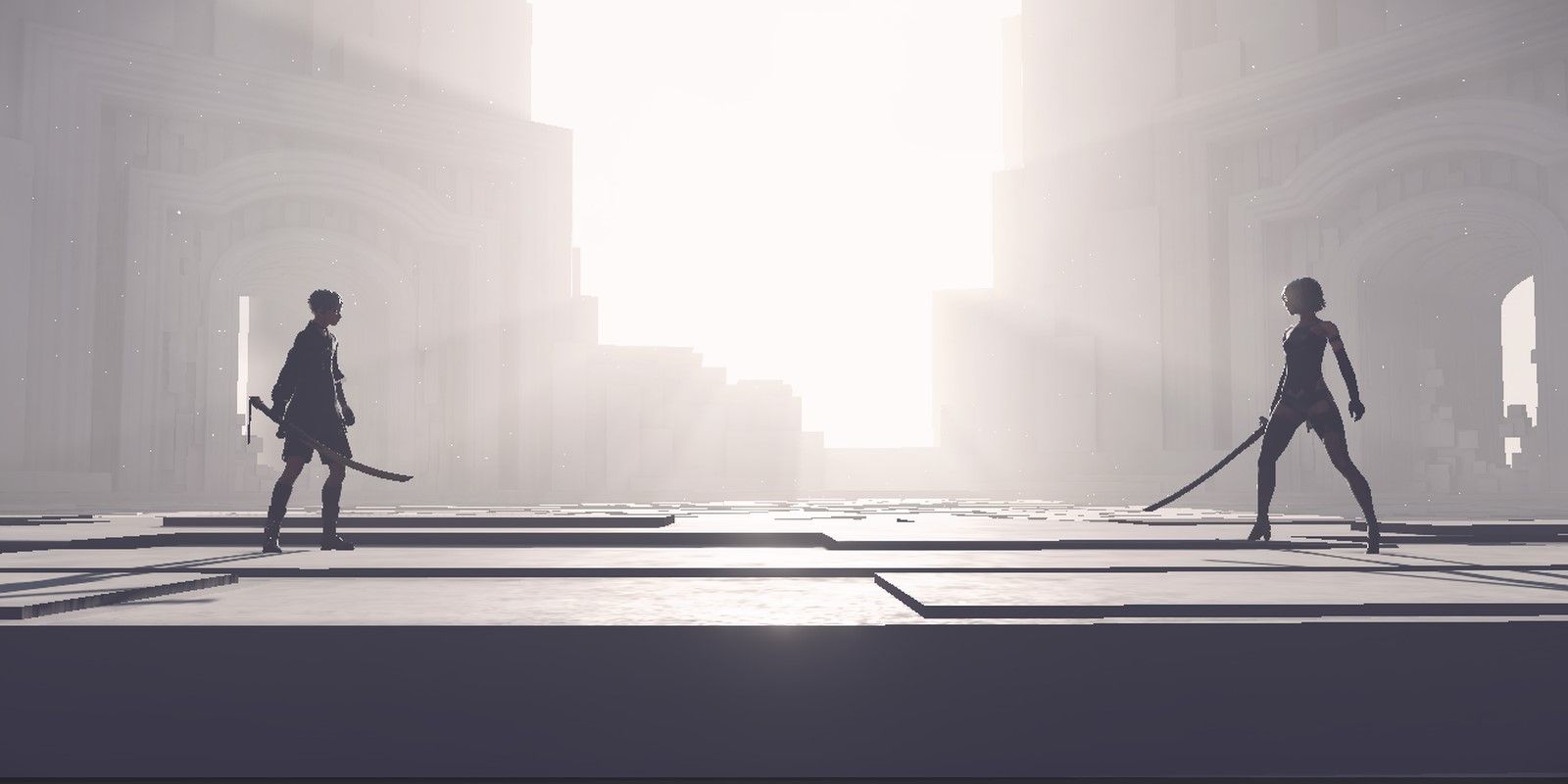 To get this ending, you need to have already completed endings A and B. Unlike A and B, this ending comes further down the linear story. If you thought the first half of the game was depressing, you had another thing coming.

You are given a choice in the final fight between playing as A2 or 9S. To get ending D, you have to choose 9S and beat A2. You are also offered a dialogue choice in this ending. You will need to pick “I’ll stay” instead of “I’ll go with you.” 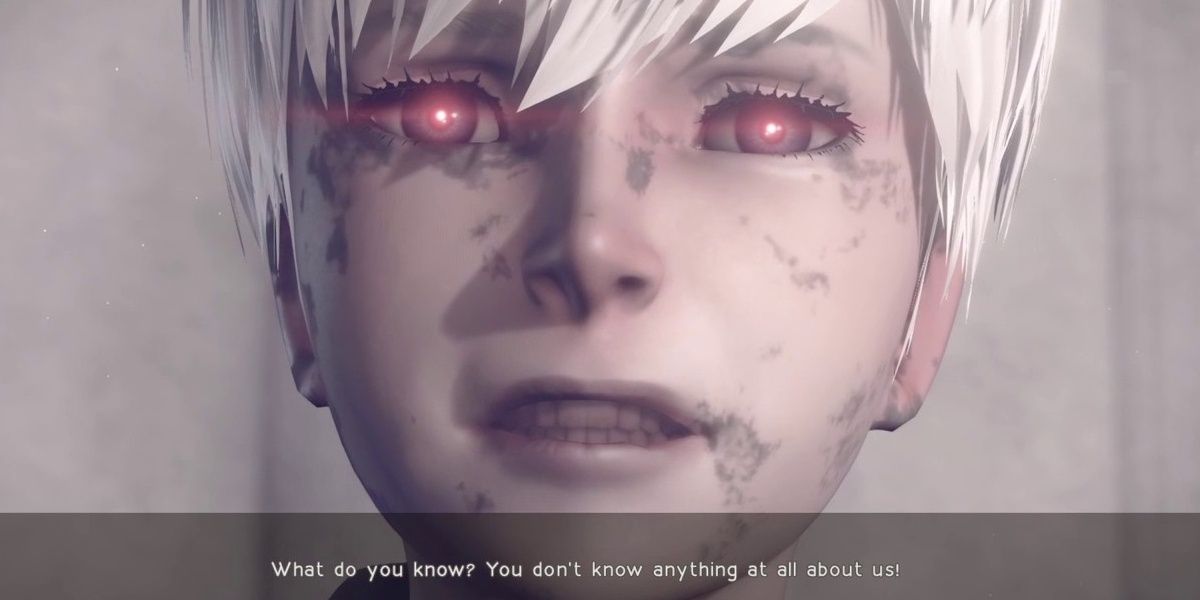 Like ending D, this ending is unlocked in the second half of the linear story after you get endings A and B. However, instead of choosing to play as 9S in the fight between A2 and 9S, you pick A2 instead and beat 9S.

Ending C, sees A2 pretty much giving up on everything to be with those who have been killed in the war. While they are in a minority, there are some players think this ending is even better than ending E. 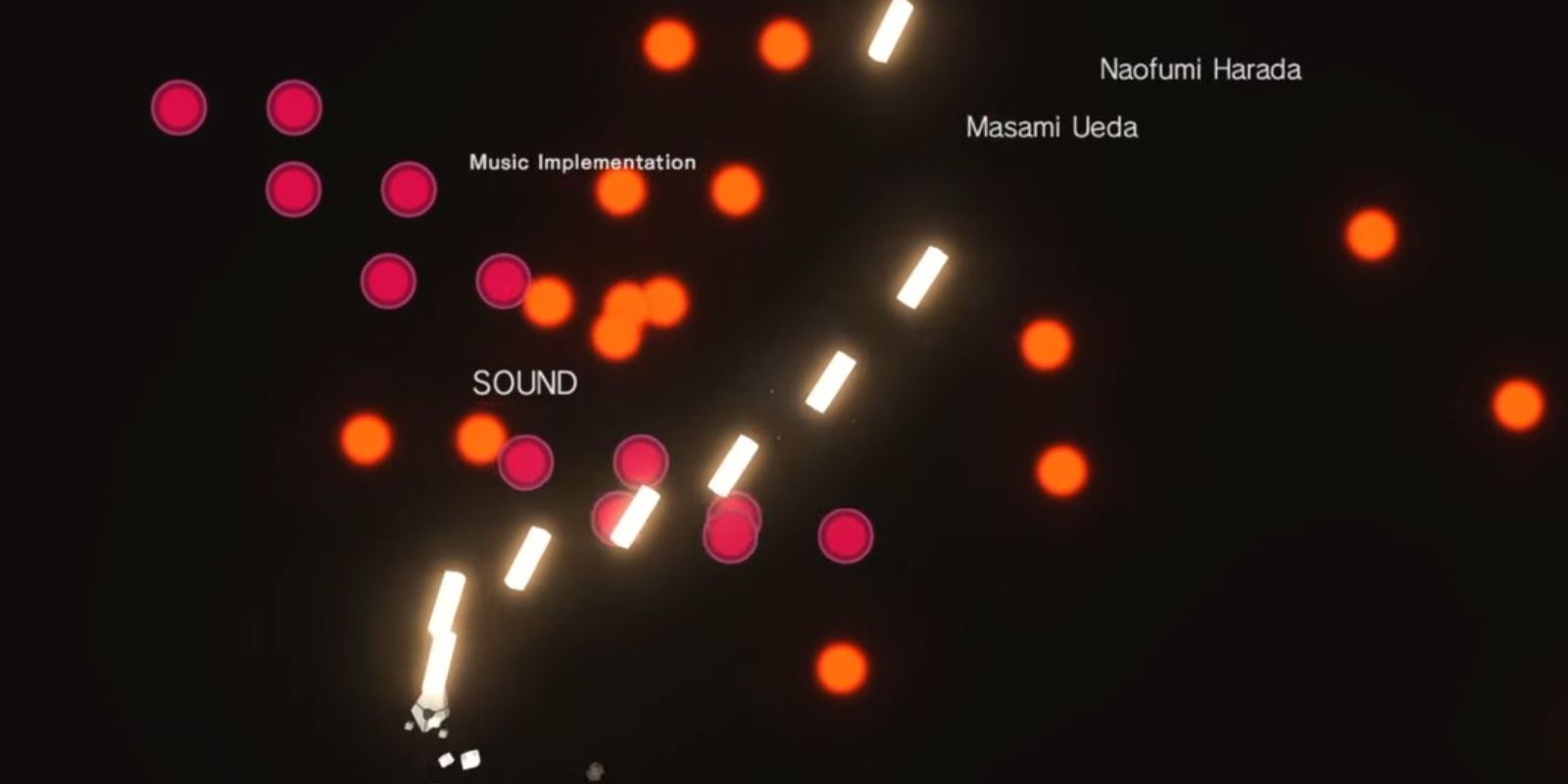 Ending E is what most fans claim is the best ending. In this ending, all the characters are restored and you get the choice to delete your save file so you can help other players get this ending. It’s considered the best because you bring everyone back to life and you unlock a difficult fight scene against the game credits.

To get this ending, you first need to get ending C or D which you unlock in your third playthrough of the game. You need to get C or D again except this time you’ll be prompted to fight the credits. You will definitely want to be connected to the PlayStation network for this by the way.

NEXT: The 16 Best Endings In 90s Console Games (And 16 That Hurt Incredible Games) 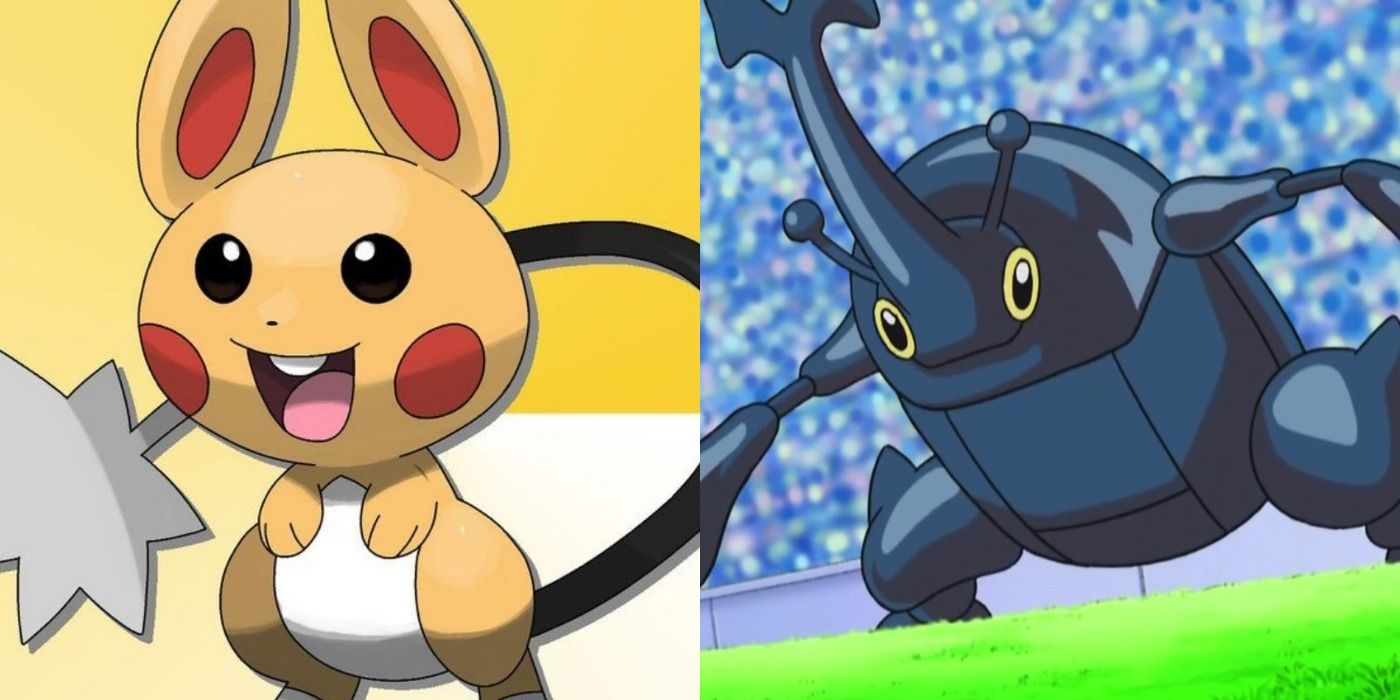