Your local Target, like many other big box retailers, is filled with classic board games. On the shelves at the back of the toy aisles you’ll find great options like Othello and Uno, as well as no less than six different versions of Monopoly. But, the world of tabletop gaming is much bigger than it used to be, and not being familiar with the rules is no longer a barrier to a fun evening shuffling cards and rolling dice.

The tabletop games industry is experiencing an unprecedented renaissance right now with literally hundreds of excellent board games and role-playing games coming out every year. Many are only available through Kickstarter campaigns, directly from their creators, from a handful of boutique publishers, or your friendly local game store. Now they’re also on the shelves at your local Target. Here are our picks for the very best.

The most influential board games of the decade, according to top designers

When Polygon asked some of the hobby games industry’s most influential designers what the biggest games of the last decade were, 7 Wonders came up an awful lot. And there’s good reason. The game accommodates from one to seven players, making it great for medium-sized groups. It’s also very easy to pick up and play. If you’re a fan of card games with drafting mechanics (where you pick a card and pass a stack to the next player), you should be able to get your group rolling in no time. Or, if you’ve got no experience whatsoever, there’s a great companion app to help get you started.

A favorite of the Overboard team in Polygon’s New York office, A Fake Artist Goes To New York is a wonderful party game. It shares a lot in common with the classic charades game Pictionary, but adds a thoroughly modern hidden role mechanic on top of it. The box is also very small, making it extremely portable. For details, check out our let’s play embedded above and on YouTube.

One of the more attractive games on our list is called Azul. Inside the small, square box you’ll find a series of colorful tiles which you’ll use to construct a mosaic pattern on the table. It’s very easy to learn the rules, and it also travels exceedingly well. 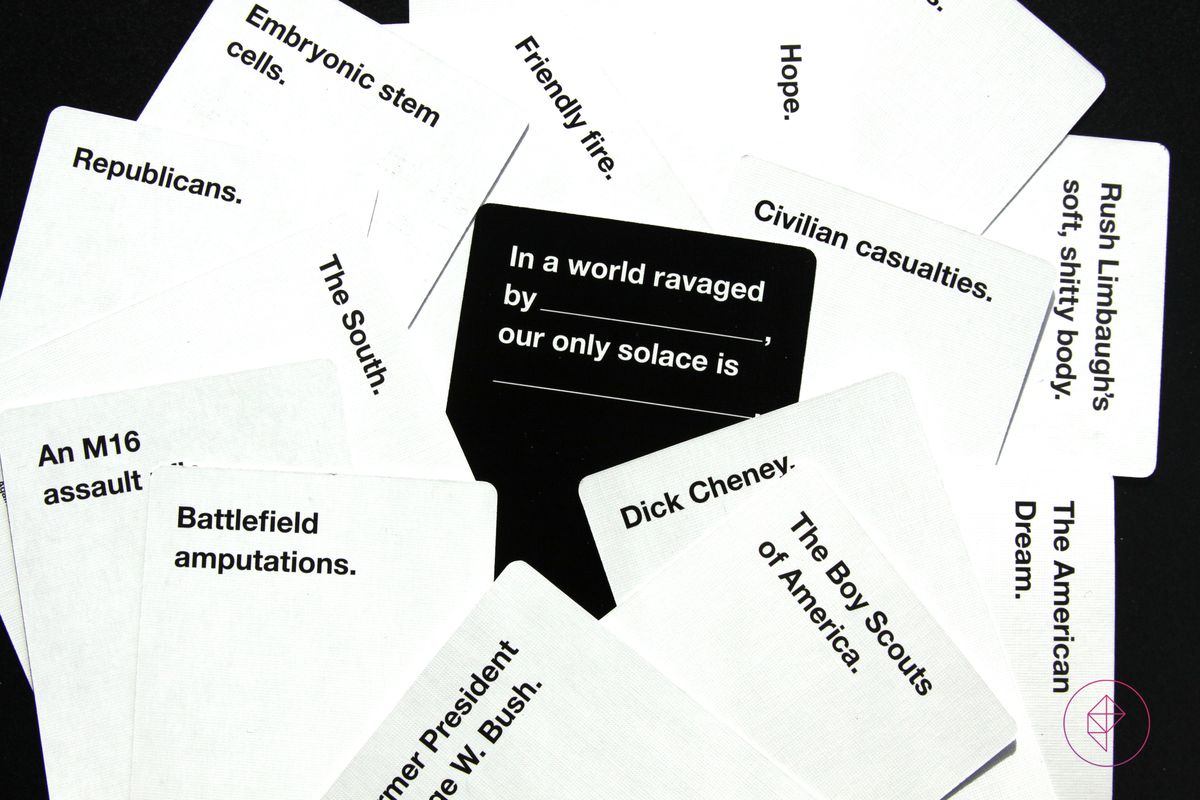 By now everyone should have at least one copy of Cards Against Humanity, the “party game for horrible people.” But it might not be a bad idea to pick up a new one. The team behind it makes a habit of revising the cards themselves every so often, keeping the jokes fresh if not always family-friendly. Target has a big display of CAH products in their games section, which includes the base game but also a half-dozen or more add-on packs. Our recommendation is the WWW Pack, a $5 set of 30 cards written by anonymous users on Reddit. Proceeds benefit the Electronic Frontier Foundation. 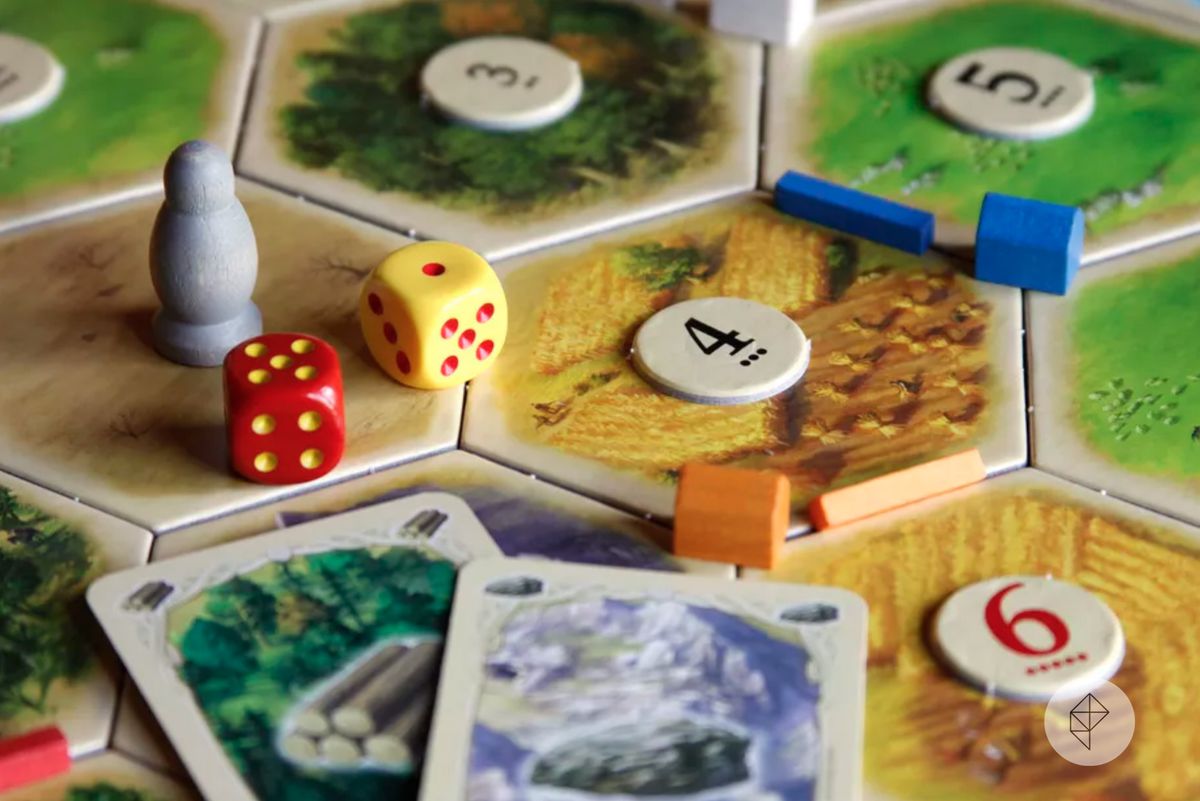 I personally don’t like Settlers of Catan all that much. It’s a terribly social game, and one that requires a fair bit of secrecy and strategy. It all adds up to a challenging experience for newcomers. Also, I keep losing at it. So that’s why I opt to play against children instead.

All jokes aside, Catan Junior is an excellent light board game that is very easy to learn and won’t take all night to play. There’s also fewer bits to mess around with — no more lining up roads and such on the table, for instance — making it great for travel.

Another quick and easy hidden role game at Target is called Coup. Players take on the role of nobility in a science-fiction setting, and must use a combination of cash and influence to achieve their goals. But no one actually knows who has the real power until the final few rounds. The travel-sized box also makes it a great pick-up on the way to the in-laws. The game accommodates up to six players, and can actually be taught in as little as 15 minutes. 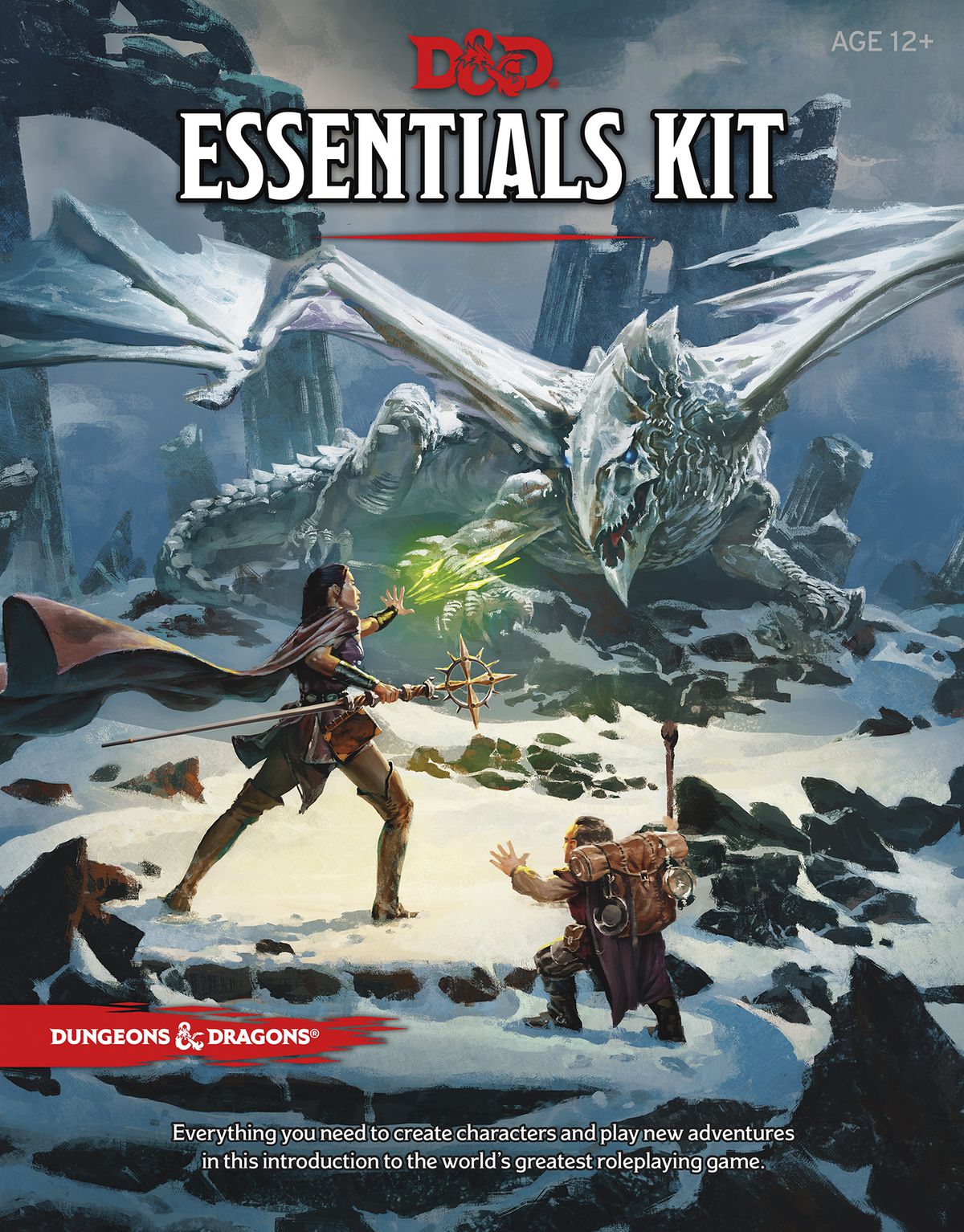 Once a timed Target exclusive, the Dungeons and Dragons Essentials Kit is perhaps the best boxed set that D&D has produced in its entire history. True, you don’t actually need a starter kit to play D&D. You can just download the free version and get started right now. But this boxed product includes rules for just two players — a Dungeon Master and a single player character. Add in some handy item and quest cards and a decent set of dice, and you’ve got everything you need.

Furglars is a silly game that’s sure to start your evening off with a few laughs. Inside the box are a bunch of hollow black plastic dice with fuzzy green poof balls inside. Those are the Furgles, and you want as many of them as you can get.

Don’t ask why, just roll the dice. Take all the face-up Furgles you find, and pass the remaining dice to the left. The secret to the fun — other than the cuddly dice themselves — is an easy-to-learn screw-your-neighbor mechanic. It’s so easy, in fact, that it almost requires no explanation. Just put the person with the least experience at the back of the line and before the first round is over they’ll have the basics down pat.

Just be sure to count the dice when the game is over; they’re so cute that they have a knack for finding their way into people’s pockets.

The award-winning Kingdomino is a tile-laying game that emphasizes planning, pattern recognition, and geometric thinking. Players take turns choosing domino-shaped tiles from a common pool. The goal is to build out your kingdom in just the right size and shape on the table, scoring more points than your neighbors. It’s a lightning-fast take on the traditional, non-confrontational Euro-style board game, meaning you won’t be attacking neighboring kingdoms. All laid out it makes for a very approachable package, and its simplicity makes it easy to play more than once in a single evening.

The original collectible card game, Magic: The Gathering, is a whole sub-culture. But at big box stores like Target it’s been repackaged for laypeople like you and me. Magic: The Gathering Game Night isn’t located in the toy section. Instead, you’ll need to head up front to where the trading cards live near the checkout lanes. But it’s there, in a nice portable package. Inside you’ll find everything you need for one-one-one or multiplayer games. The kit comes with five pre-built decks, d20-shaped life counters, and a handful of cardboard tokens to get you started. 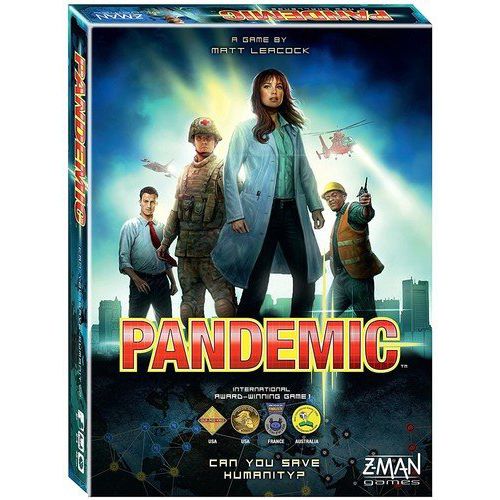 Matt Leacock’s Pandemic is perhaps the single best gateway into modern tabletop gaming. It’s also on sale at Target stores nationwide. It tells the story of a group of plucky heroes trying to stop a global outbreak of a number of deadly illnesses. Only by working together can players succeed. The game does have a tendency to lead to quarterbacking — that is, when the most knowledgeable person at the table takes control and crowds out everyone else. But, if you can keep from being too overbearing, it’s wonderful for new groups.

Along the lines of Azul, mentioned above, another gorgeous board game that’s easy to teach and quick to play is called Sagrada. Players compete to construct stained glass windows. Using colorful dice and glass gems, the game moves very quickly. Like Kingdomino, you’re bound to play more than one game in a single evening. There’s also plenty of how-to-play guides online and at Target.com.

The best family board games for the holidays

One of my favorite party games is called Telestrations. I’ve called it out in the past as a sure-fire way to save the holidays, but it’s a load of fun any time of the year. Combine Pictionary with the folk game known as Telephone and you’ve got the gist of it. Players do their best to draw a picture based off a prompt from a playing card, then pass their drawing to the next player in line. They then have to guess what the prompt was, and that guess is what the next player uses as the basis for their drawing.

Last, and definitely not least, is Disney Villainous. In this asymmetrical strategy game, everyone at the table takes on the role of a classic Disney villain — either Maleficent, Ursula, Prince John, the Queen of Hearts, or Captain Hook. Everyone has a slightly different goal, however. Ursula wants to take back king Triton’s crown trident, while Captain Hook wants to kill Peter Pan aboard the Jolly Roger. Each player gets their own sideboard with a different set of actions, but the game is much more than an elaborate version of solitaire. Thankfully it also comes with a brief strategy guide for each villain. If you’re looking for something unexpectedly meaty, Villainous will do nicely for even the experienced board gaming crowd. Also be on the lookout for its expansions, Wicked to the Core (which adds Dr. Vacilier, Hades, and the Evil Queen) and Evil Comes Prepared (Ratigan, Scar, and Yzma.)

Cyberpunk 2077 Dev Speaks About The Importance Of...

Little Hope, The Next Installment Of The Dark...