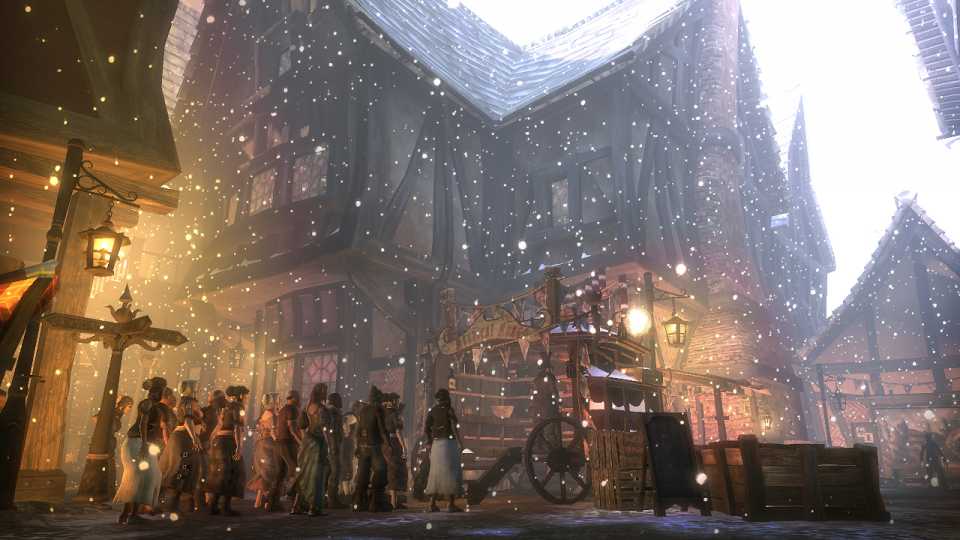 A reader ponders which is the most Christmassy video game and comes to the surprising conclusion that it may be Fable 2.

And so it is Christmas. Another year over, and a new one will soon begin. And again, Covid has done its level best to steal the joy from yet another holiday. It feels like it has been too many. But if you’re determined to be of good cheer this festive season… you may want to steer clear of such hazards as friends and family and stay in your room playing video games.

My most potent memories surrounding the holidays are of Dynamite Headdy for the Mega Drive way back in the ancient, long ago times of Christmas, 1994. Somehow, maybe because it’s all about toys (who are also puppets?), it was well suited to that time of year. But that’s just me.

But what video game is the best reflection of the season? The Muppet Christmas Carol of games? There are plenty of great levels or bits of games: a Cool, Cool Mountain here or a Windhelm there. But what game, as a whole, gives you that warm, fuzzy feeling that only warm mulled wine can on a cold, dark day?

You have the Christmas NiGHTS Into Dreams demo, which is very hard to get and only a less well stocked version of it exists for seventh gen consoles. That’s nice, of course. And yet… it rather misses the point. Christmas isn’t just about receiving presents. It is about getting better presents than your friends and family so that you ‘win’ Christmas.

To those who don’t think that Christmas is a competition, you have already lost. But yeah, giving is better than receiving, joy to the world, peace on earth and good will to us all and all that jazz.

So, weirdly, I came up with the answer of Fable 2. It has a very Christmassy opening, of course… right up until your sister, Rose, gets shot and you’re thrown from one of the higher windows of Castle Fairfax onto the icy streets below. Then again, A Christmas Carol isn’t without its darkness.

You can play the game as a rotter, of course. Be the worst of the worst, the most hated and cursed. The darker path isn’t as rewarding, however. You psychopaths. And yes, the game has its shortcomings. All of the weapons you buy are mere placeholders until you fill your inventory with legendary gear.

For female characters, the way your form changes to depict your growing strength and prowess doesn’t quite work. Lucian is a worthless villain. Reaver is far more memorable, and he’s on your side! Eventually! Your time in the Spire is kind of dull, and I never look forward to it on repeat play. And the climax, such as it is, is practically laughable.

But even though all it is, is a series of numbers going up, it can be very effective. To walk into Bowerstone and see a tidal wave of blue signifying the people’s love for you really works. People crowd you almost immediately. Something that should be way more annoying than it is.

It is even worth charging just slightly less for the rent, the moment you get on the property ladder. It’s like how Emilia Clarke must have felt at the end of Game Of Thrones Season 3. Then there’s all those love hearts over people’s heads. Which when you’re in the shadier areas like Westcliff or Bloodstone, is very endearing.

As is typical of something headed by Peter Molyneux, the promise of a story with more depth doesn’t quite materialise. Certainly not as a whole. Not that there aren’t some very effective moments. Hearing Stephen Fry chew the scenery as Reaver is funny at first… until he sends you to the Shadow Court. And then you realise what he really is. And all the unforgivable things he has done.

While the death of your sister didn’t land as hard as perhaps the developer intended, you do meet her again towards the end. In a sort of dream world where you are both children once again and experience the ‘perfect day’ together.

The fun activities she has set up for you are a little trivial and you won’t get to do them all. Which is, of course, the point. Yes, I’m sure you know where this is going. The day comes to a close, but Sparrow doesn’t get to sleep. Adventure calls with unknown voices pulling you away. No amount of time spent with someone you’ve lost can ever be enough.

Her fading cries as you leave her behind have stayed with me more than a decade later and will remain so until all my days are gone.

Sparrow travels a route of horror on their way back to the music box that started it all and upon grasping it, takes them through a tour of their life. Every triumph. Every tragedy.

At the end of everything, Theresa offers the player a choice of fortune, their heart’s desire or the return of every soul lost to the Spire. As you can see, two of those options means giving something of yourself. And even the rather poor cash reward means losing out on something better. So even that is a sacrifice of a kind. Just not a noble one.

It’s worth me pointing out that while the Knothole Island DLC will give you back your dog, should you choose the most altruistic ending, it won’t give you Rose back. The heart’s desire will only give you a letter written by her hand, but you won’t get to see her ever again.

And, in a very poignant way, isn’t that the best present you could have got for her?

Merry Christmas everyone and hold onto all those you love for as long as you may have them.