Forsaken, or Forsa for short, is the protagonist's sentient fightercraft in Chorus. He can be easily modified in-game by swapping out weapon and modification systems. This allows the player to quickly adapt their tactics or just shake up their playstyle. By the time Nara and Forsa are ready to defeat the Great Prophet, they'll have a wide variety of loadouts to choose from.

We've picked the best weapons for each of the game's three systems, and developed a recommended loadout to get the most out of each one. Since equipment can be swapped out any time from the pause menu, you can even change out your gear mid-battle! Pick the loadout that's best for you, or mix and match to create an adaptable build that suits your playstyle. 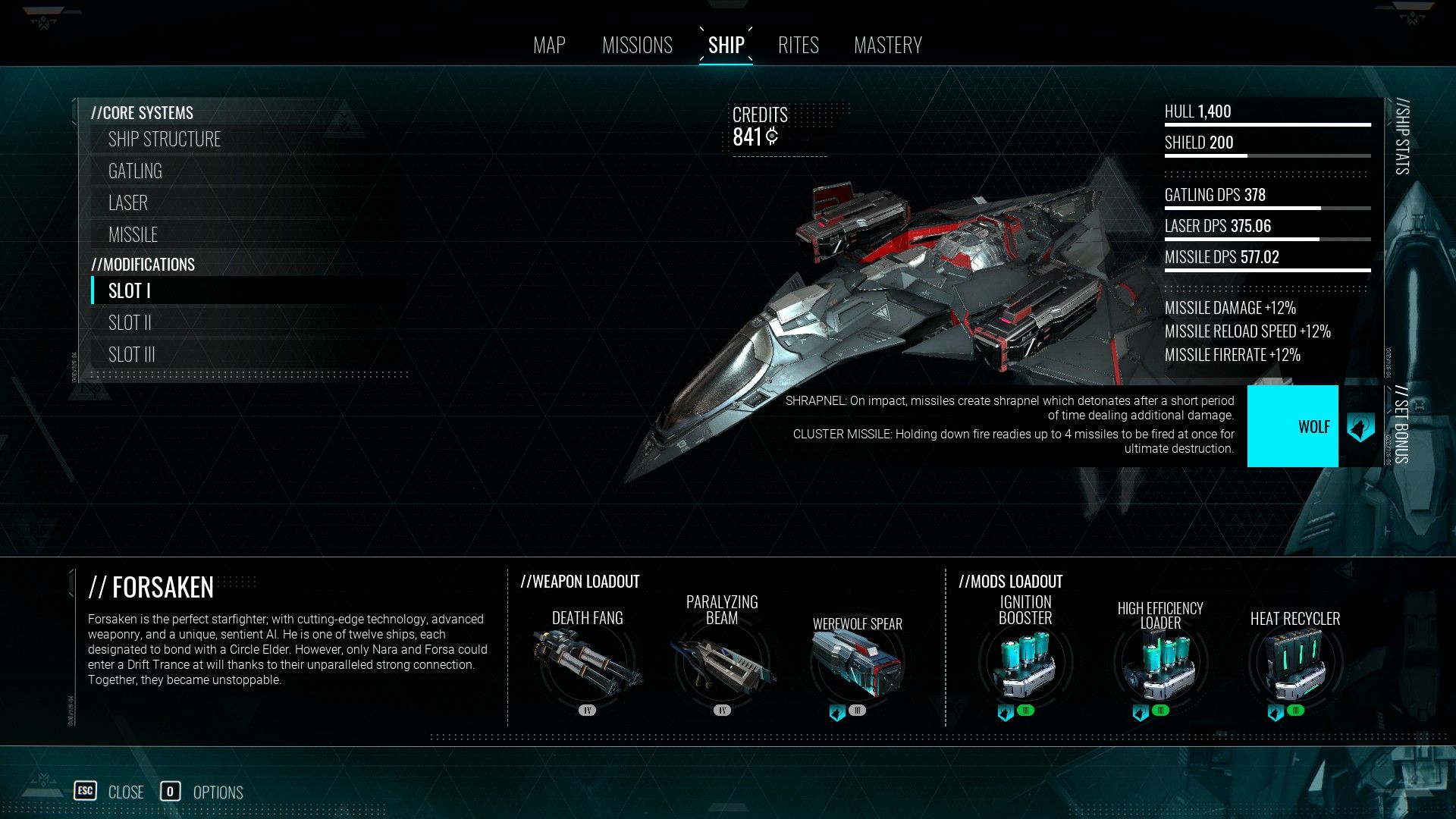 The Werewolf Spear and its associated mods are obtained during the Wolf Hunt mission chain. Unlike the game's other launchers, the Werewolf Spear fires a single, high-powered warhead capable of destroying most enemies with one hit. It's best used against stationary targets or slow-moving Vultures, but a skilled player can use it to frightening effect on all but the most nimble enemies.

For optimal destruction, the Ignition Booster, High-Efficiency Loader and Heat Recycler from the Wolf set increase the damage, reload speed and fire rate of all Forsa's missile weapons. After obtaining the Poisoned Spear in the late game, it can be worth switching to that weapon as it boasts a higher damage output and a radiation burst that can destroy enemies near the primary target. This pairs well with the Wolf set's first ability, which causes missiles to explode in a shrapnel burst, potentially creating two damage areas after impact.

Keeping the original Werewolf Spear forgoes the radiation cloud in favor of a charged shot; with the full Wolf set active, holding down the fire button with missiles equipped primes up to four warheads. Releasing the trigger fires them in a burst similar to Forsa's more conventional missile weapons. If one Werewolf round is enough to destroy most foes, a rapid salvo is all-but-guaranteed to bring them down — assuming it hits, of course. 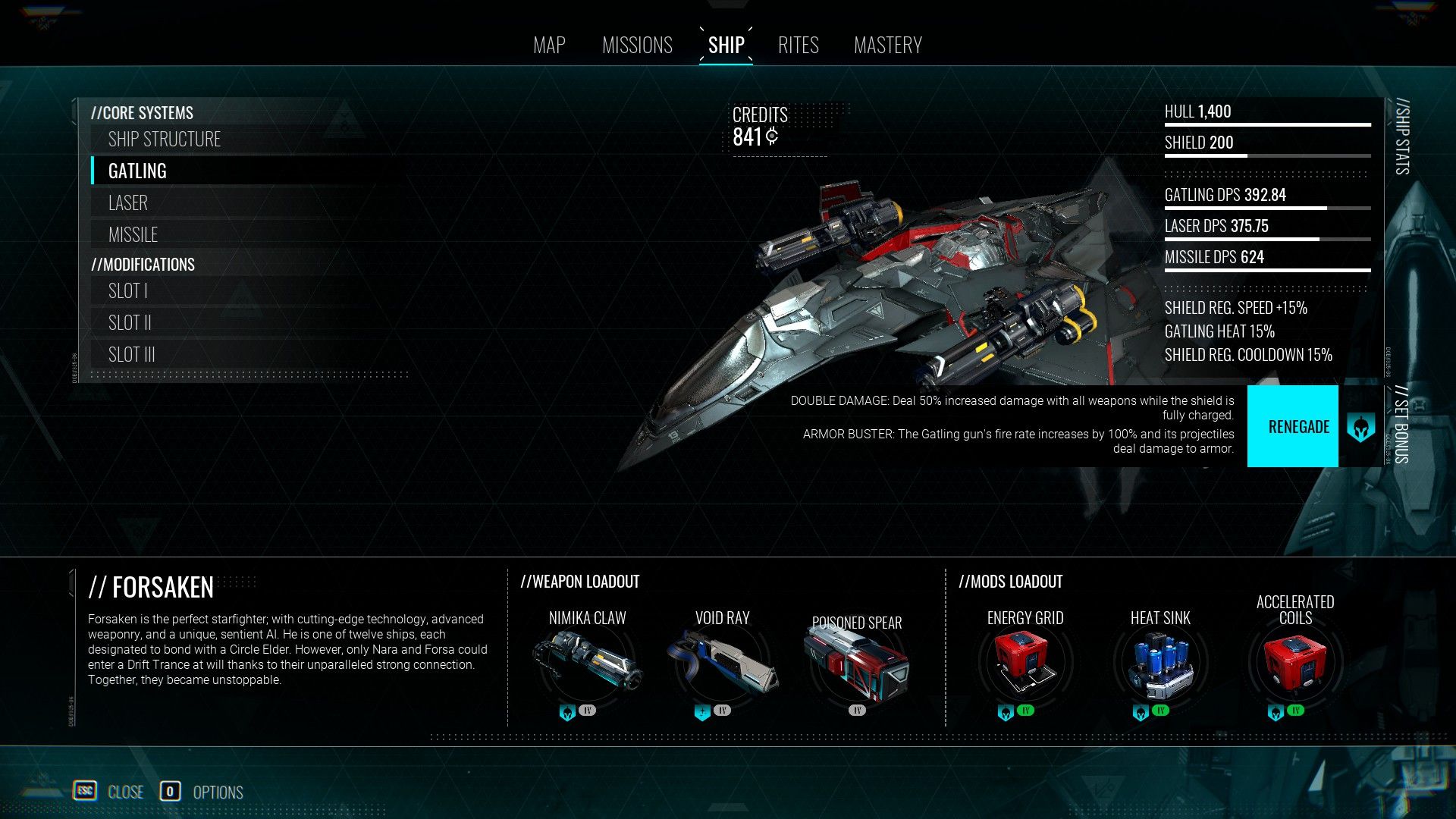 The Nimika Claw is an advanced Gatling Gun system, although like its earlier version, the Shredding Claw, it works differently from other weapons of its class. The rate of fire is severely reduced, but each round has a significantly higher damage output. If you like the power of lasers but would rather just hold down the fire button instead of waiting for your gun to recharge, this is a great weapon to try. As an added bonus, the last shot in each four-round burst has its damage increased even more and ignores the normal penalty Gatling Guns take when attacking armor.

To get the full effect of the Nimika Claw, consider equipping the three mods from the Renegade set alongside it. These are given out as side-mission rewards throughout the game, so be sure to take every mission you're offered. The Energy Grid and Accelerated Coils help recover Forsa's shields quickly, allowing you to stay alive longer and also exploiting the set bonus, which grants a damage bonus while at full shields. Since this ability only requires two Renegade pieces to activate, you can equip these two mods with a different loadout to maintain a powerful advantage. The Heat Sink prevents Forsa's Gatling Guns from overheating, so combined with the short bursts that the Nimika Claw fires, you'll never have to worry about cooldown.

With the complete set, all the Nimika Claw's shots deal full damage to armor and the weapon's fire rate is doubled. This makes it ideal for battles against Sentinels (or even the Prophet himself) since you'll often have limited firing windows and will need to make every shot count. If you use the Rite of the Storm to handle shields and the Rite of the Star to disperse swarms, you'll never need to switch away from your Gatling Gun with the Renegade set equipped. 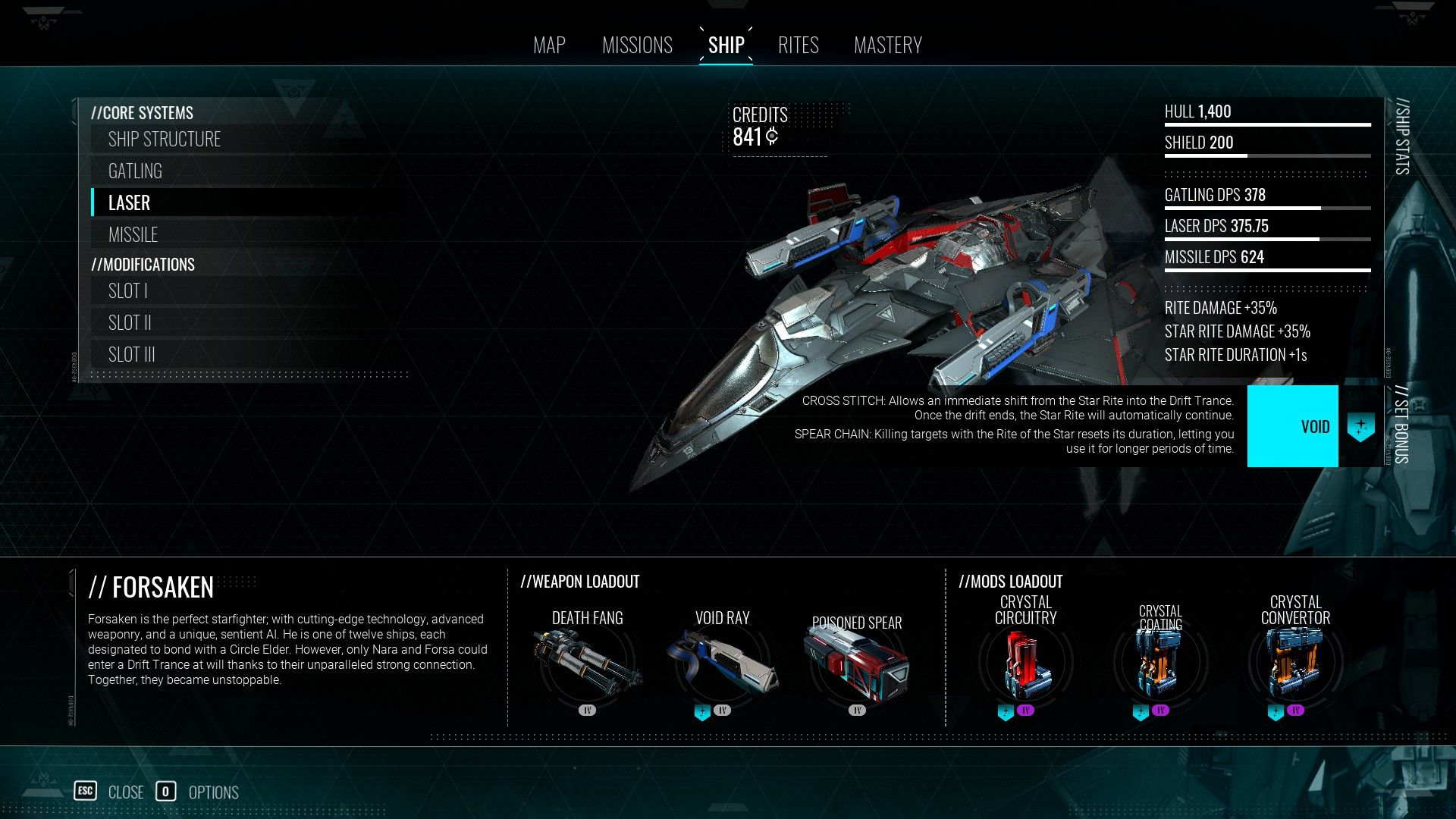 The Void Ray is the best weapon you'll never need to fire. Gained after completing the Blessed Disciples mission chain, this powerful laser causes defeated enemies to explode when fully charged, potentially damaging the other ships in their flight group. What's more, the explosion leaves behind a lightning cloud for Nara to charge her Rite Energy. While those are great perks, the real benefit of the Void Ray is in its set bonus.

The Void set (which requires Crystal Circuitry, Crystal Coating, and the Crystal Converter, in addition to the Ray itself) turns Forsa into an unstoppable death comet. Independently of the set bonus, the crystal mods increase the damage dealt by Nara's Rites, and further increases that dealt by Rite of the Star. It also increases the duration of the Rite of the Star by a full second.

Once the set bonus is taken into consideration, though, things get really ludicrous. Two pieces of Void equipment allow Nara to use Drift Trance while in Rite of the Star, then resume her charge after the Drift ends. With the full set, every enemy killed resets the duration on Rite of the Star. In short, as long as there are enemies to run down, Nara can continually charge, drift to a different direction, and keep charging with no stopping in between. With all that destructive potential, it will be easy to forget that the laser itself is pretty good, too.