The House Of The Dead: Remake is a straightforward game on paper. All you need to do is shoot zombies, fight each boss, and complete the campaign. However, these tasks are much easier said than done.

Consider The House Of The Dead: Remake's campaign as an endurance test. If you use up too many continues in the first few chapters, it becomes harder to make it to the end. Therefore, it's essential to learn the strategies to defeat each enemy to prevent significant health loss. A great topic of study, in this regard, is the game's four bosses.

Chapter One: How To Defeat Chariot 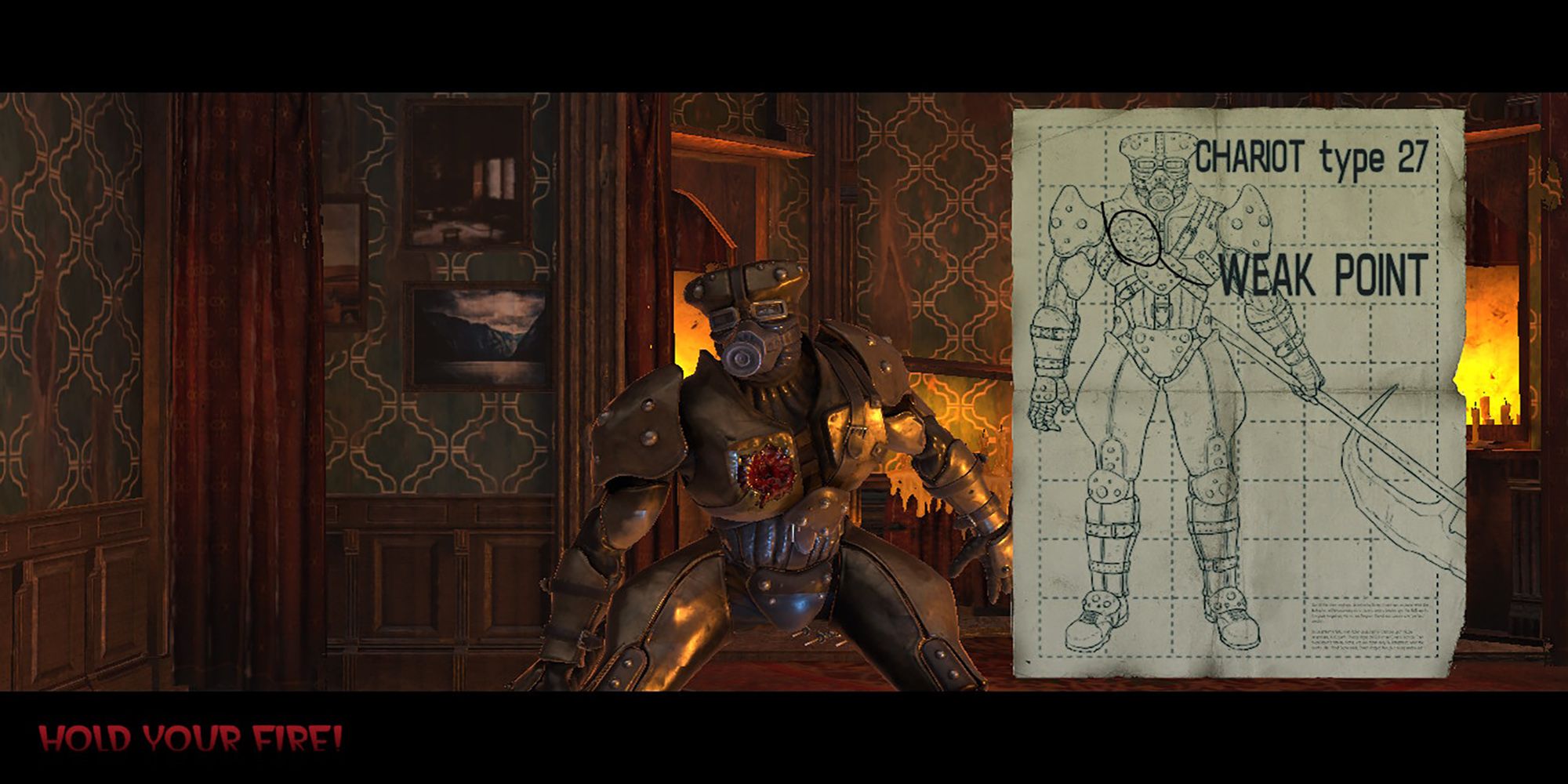 The first boss you'll encounter in the campaign is Chariot, a gas-mask donning armored zombie-humanoid terrorizing Sophie. Luckily, Chariot is the easiest boss to defeat due to his apparent weak spot and predictable movement.

Chariot's weak spot is the exposed right side of his breastplate (Your left side in gameplay). You'll spot this exposure quickly since it is a chunk of red flesh.

As Chariot saunters forward and backward, it's best to keep your crosshair in the vicinity of the weak spot and continue to shoot. If you shoot Chariot's weak spot before he gets close, you can knock him back and prevent him from maiming you with his bardiche.

Once Chariot's HP hits fifty percent, he will expel his armor and reveal his proper form. This green tendriled hulk of rotting flesh is a simple kill. To defeat him, target his limbs, torso, and head, one at a time, eradicating his flesh from his bones. Chariot will sink to the ground once you blast away most of his flesh.

After stripping the flesh from one of Chariot's body parts, it is vital to move on to the next. Chariot will no longer incur damage from shots aimed at de-fleshed areas.

Chapter Two: How To Defeat Hangedman 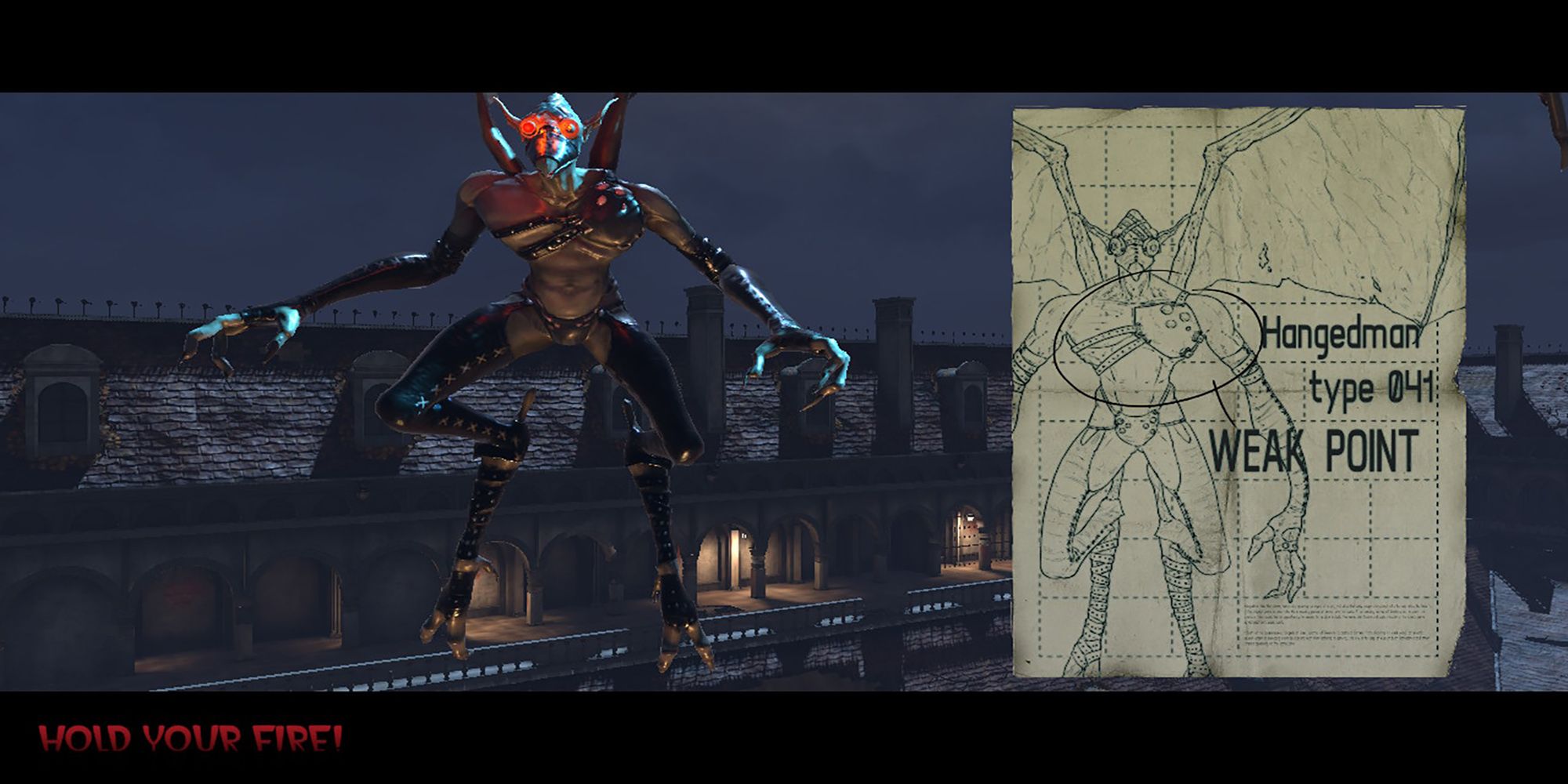 The battle against Hangedman follows a similar two-stage format as Chariot. First, you'll need to take down the bat-like Devilons protecting Hangedman. Then, focusing on his weak spot will finish the job.

By the time you reach Hangedman, you'll have encountered Devilons already. For clarity's sake, let's call them 'bats.' Hangedman will command his bats to attack you in trios. You'll know which bats are heading toward you in Performance Mode because they'll have a reddish-pink lighting effect.

The bats only attack once. So whether you kill them all or not, as long as you survive them, you'll proceed to the next stage of the battle.

A cinematic will ensue once you knock Hangedman's health down to fifty percent. He'll swoop behind the mansion walls, then reappear and knock you down to the roof's ledge. However, your combat strategy should not deviate from before once the cinematic ends. Keep aiming for that weak spot, and Hangedman will fall to his death in no time.

Besides Magician, Hangedman has the most movement range out of all the bosses. If you're new to fighting him, we recommend holding your fire until he gets closer to you. However, once you get more comfortable with the controls, practice following him with your crosshair to take him down quicker.

Chapter Three: How To Defeat Hermit 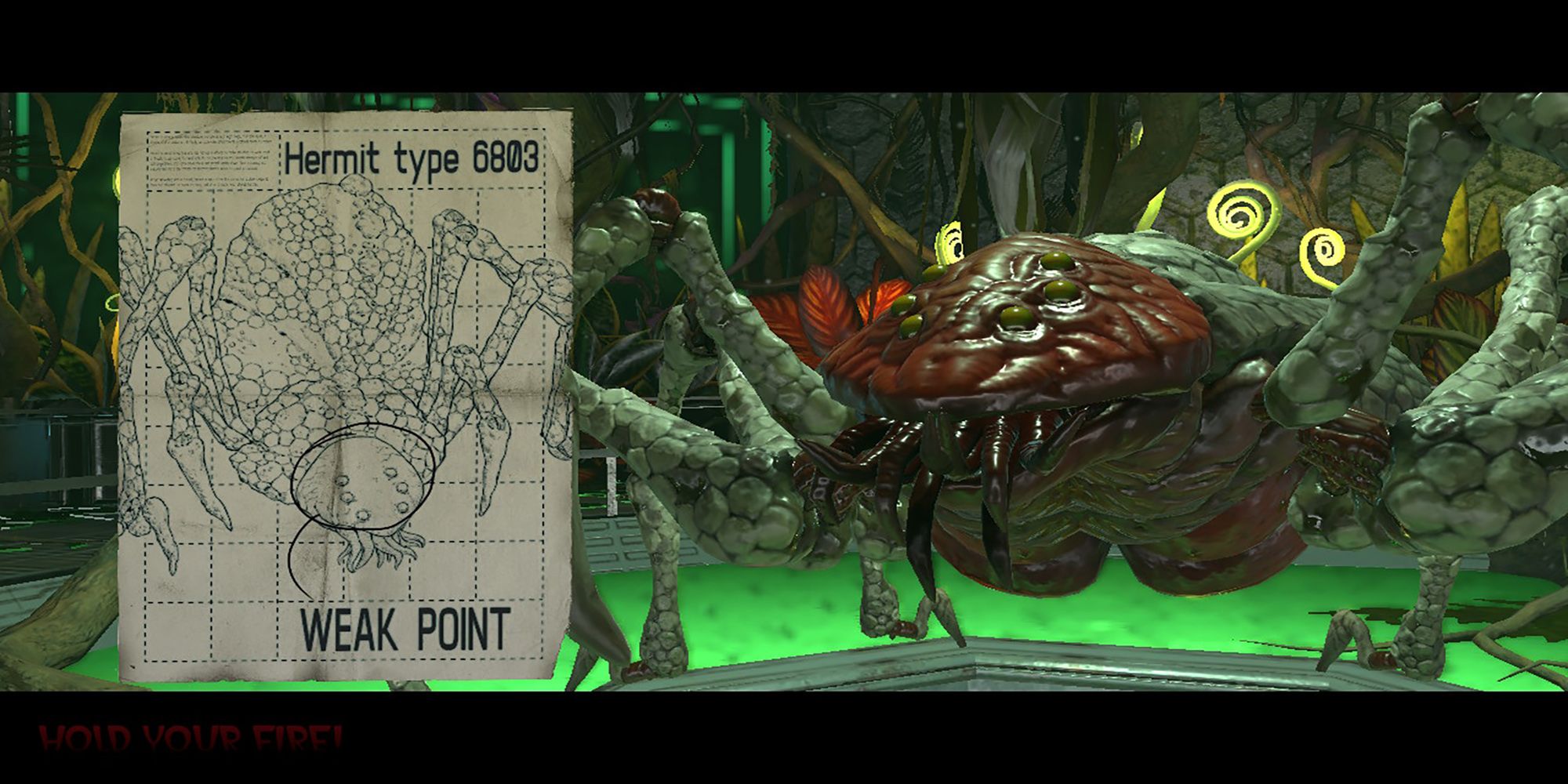 At the end of chapter three, you'll encounter Curien for the first time, and he'll introduce you to Hermit, one of his gnarliest creations. Hermit is a big-ass zombie spider mutant with tentacles protruding from its mouth. Luckily, its looks are more intimidating than its combat skills.

Hermit's weak point is its head, which is excellent since it stands out like a red sore thumb. The only significant obstacles in front of it are Hermit's compact front talons.

You'll face Hermit on the same plane in the first battle stage. In this instance, you can focus on shooting the head. Like other bosses, consistent shots to Hermit's weak spot will prevent its attacks.

Once Hermit's health hits fifty percent, it will retreat up the tube you've been chasing it. Then, when the second battle stage begins, Hermit will attack from above you.

During this phase, Hermit will alternate between web-shooting and direct attacks. First, you need to shoot the web balls that spin out Hermit's backside. Failing to do so will cause damage and further obstruct your view. After that, Hermit will approach you, giving you a chance for a shot at its weak spot. This pattern continues a few times until you fully deplete its HP.

After each web attack, Hermit will approach you from different angles in the battle's second phase. Keep an eye on its head, so you don't miss your shot.

Chapter Four: How To Defeat Magician 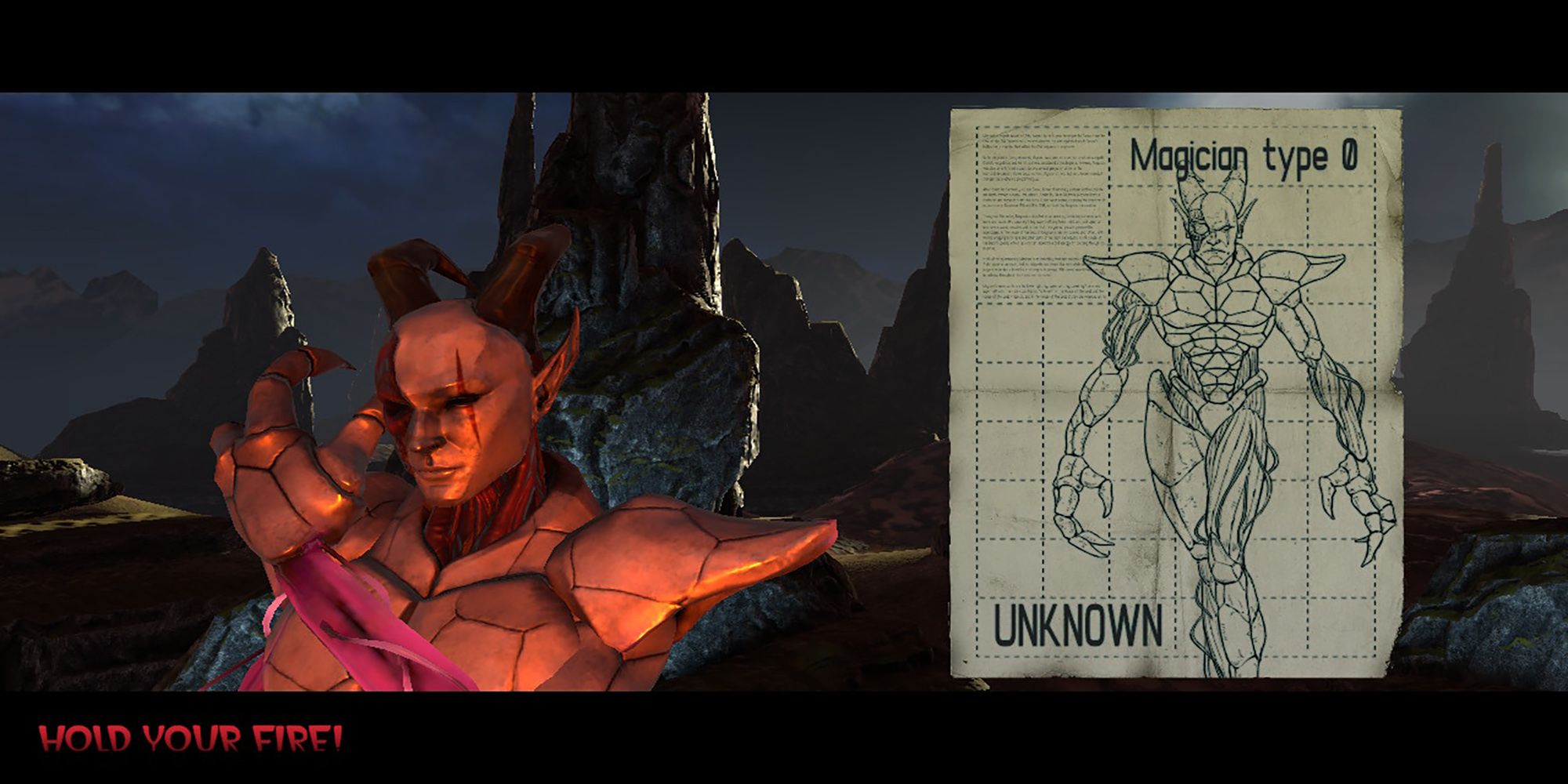 The final boss, Magician, is the game's most formidable by far. First, his movement is quick and disguised in a colorful optical illusion. Second, his attacks are potent. Finally, the enemy diagram does not reveal his weak spot, declaring it is "unknown." Defeating him will take skill and patience since this is a considerably long battle.

Our most significant piece of advice before facing off against Magician is to play the campaign with the knowledge that you will face Magician. In other words, do the best you can to preserve your continue tokens until the end of the campaign. You'll likely lose a few lives against Magician, and these continues will deplete your points without any tokens. And once you lose all your points, it's game over.

We recommend fighting Magician first with Modern scoring since you can earn more points. In addition, this point bonus will give you more leverage in the late stages of the campaign.

When you first start your battle against Magician, he'll attack with long-range projectiles. Therefore, it's vital to attack him before he generates these balls of fire since deflecting them is challenging to do.

He'll occasionally come in for a close-up assault between these projectile attacks. In these instances, just like the other bosses, you need to shoot before he can attack.

But, where should you aim? After all, the game does not specify a weak spot as it does for the other bosses. In our experience, our best guess is that Magician's weak spot is from his left thigh to his left knee (your right). The bone-colored shell does not cover these muscle tendons like other parts of his body. Therefore, this area is visibly magenta.

Once you deplete Magician's health about halfway, he'll start launching rounds of a dozen aerial projectiles at a time. In this situation, you'll have to shoot these projectiles in the air before they fall to earth.

The battle continues in this pattern (long-distance, melee, aerial) until you get to the last five to ten percent of Magician's health. After that, you'll have to survive a few rounds (about three or four) of Magician's aerial attacks before you can incur damage again. Luckily, once you break through that threshold, you'll defeat Magician.