Finally, baby, we made it through the rain. Here we are at the Indigo Plateau, our greatest achievements behind us, our greatest challenge before us. After spending most of this year playing Pokemon Blue, hitting a new location week by week, and trying to explore the land as a tourist, I've reached the end of the journey. In a way, there might be some poetry in concluding affairs here. It's all about the journey, and our final footsteps have been taken, just smears of dirt on the Plateau's tiles as I shuffle out of Victory Road. Who needs poetry when there's content to be created though, eh? For those of you tuning into our journey at this late, late stage, welcome in and pull up a chair. You can get yourselves caught up on the story so far right here. For the rest of you, let’s press on.

So far, I have avoided writing about the battles unless I have felt they intertwined with the journey itself. For example, at the midpoint of the game you shuffle from place to place, and the people you meet are an inescapable part of your adventure, far more than just a random dude with a Graveler who Self-Destructs in front of you for some kind of sick pleasure. But when facing my final gym leader, I had to write about how disappointing Giovanni was as the final hurdle. That's why I'm treating each battle here with a little more reverence and importance than the other battles so far. I won't be doing blow by blow commentary, otherwise I'd end up caving my own skull in blow by blow from the boredom of telling you Lorelei's Dewgong just used Rest for the fourth time, but each week the individual Elite Four members will get the spotlight, culminating in (spoilers!) your rival from the start.

Right now though, let's just chill out in the Indigo Plateau for a while. I was unimpressed with how the Victory Road prepares you for the Elite Four, immediately taking the prestige off the whole affair by stuffing the caves with morons running terrible teams and then giving you an entirely unearned Moltres that everyone else, dunderheaded as they are, just left there. The tone changes immediately in the Indigo Plateau, though. Back are the statues of Pokemon looming large over you, and the warm air returns to your lungs as you stand up straight and shake off the cold, cloying fog of the cave behind you. 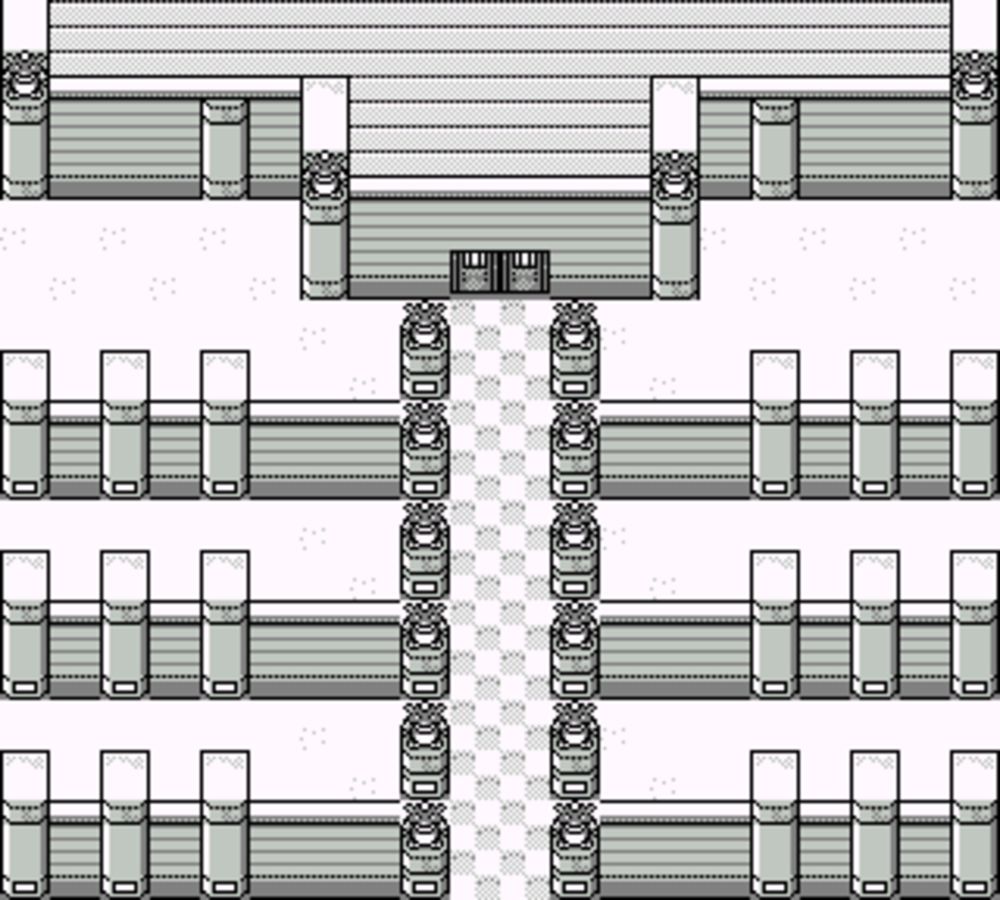 There's a sense of majesty as you approach, but inside it all feels more intimate. The Poke Mart is just a man at a counter right by the healing station, who seems like a kindly attendant in a hotel, here not only to sling Potions, but to offer a comforting warmth as you prepare to step into the unknown. For all Kanto's nostalgia has hooked itself into my skin, replaying the game I have noticed in a few places where the vibes are off. The need for thick, straight lines and the technological limitations of the era held Pokemon Blue back in places. In the Indigo Plateau though, the vibes are very much on.

That's what so much of this journey has been about. Pokemon Blue expects you to paint the gaps in the details in your mind, and occasionally it asks too much of you. Here though, from the details of the complimentary drinks fridge, to the way the path narrows as it funnels you around to the final threshold, the level design leaves the details perfectly for you to imagine the whole scene. The deep breath before the door, the shoulders rolling back, the looking to the sky as you shake your fingers loose before steeling yourself to take that first and final step – all of this exists in your mind because the level design suggests it to you. It's a whisper in your ear as you approach the Elite Four. Next week, we'll cross that threshold and take on Lorelei, my personal favourite of the Elite Four. Come back and see how I do! I mean, I win. It's a game for children that I've played ten times before. Still, it'll be fun!