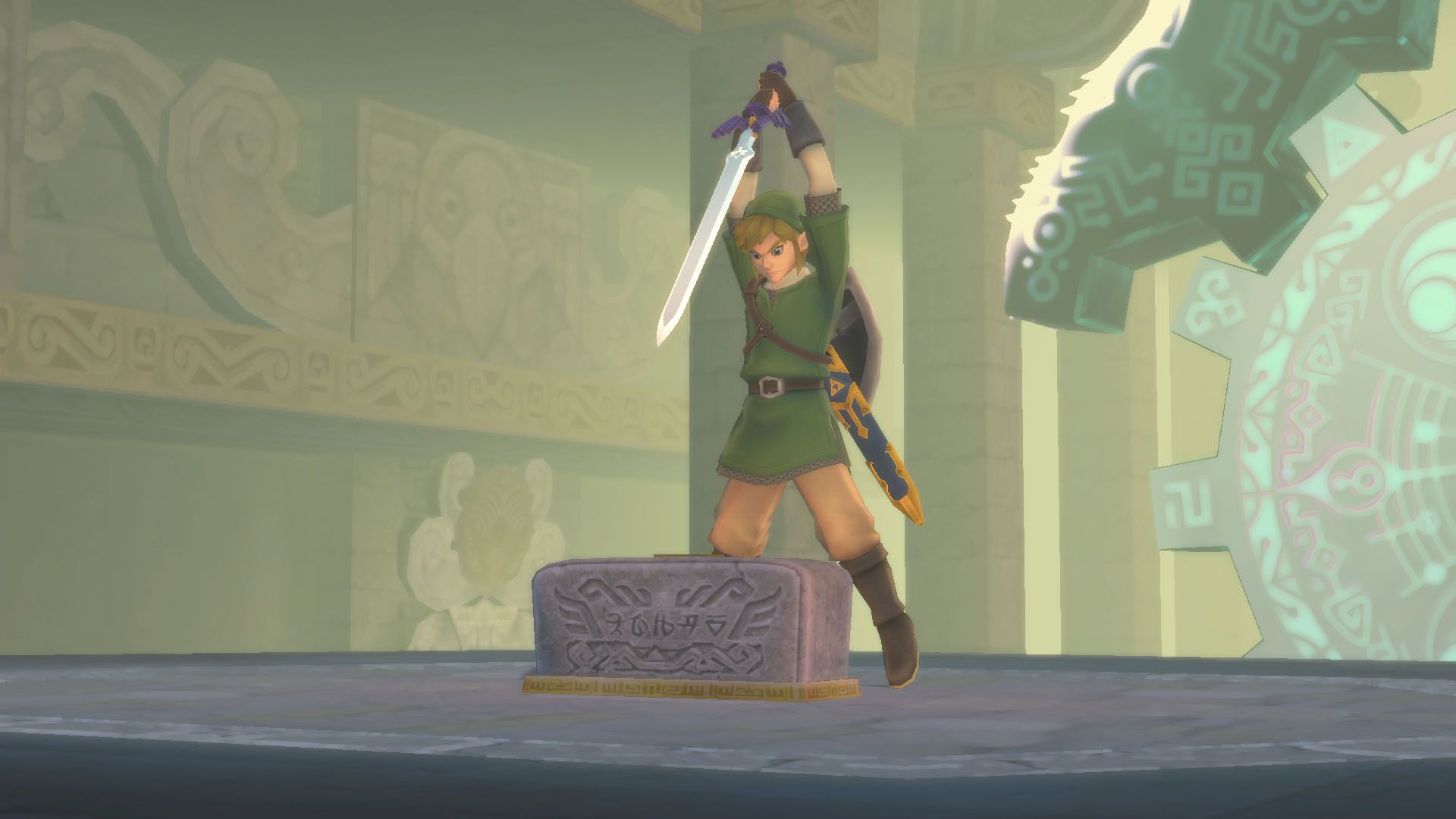 The most controversial 3D Zelda is remastered for the Nintendo Switch, with a new control system that doesn’t use motion controls.

It may not have been that obvious at the time but The Legend Of Zelda was in something of a crisis prior to the release of Breath Of The Wild. The three mainline home console entries after the N64 era were The Wind Waker, Twilight Princess, and Skyward Sword, none of which received the universal acclaim of their forebears. They were all good but, arguably, none of them were great. Not in the same way that Ocarina Of Time or Majora’s Mask were, or even A Link Between Worlds on the 3DS.

The Wind Waker was rushed and unfinished; with a dull, empty open world. Twilight Princess was too beholden to Ocarina Of Time and too much a knee jerk reaction to The Wind Waker’s perceived childishness, with no new ideas and a bloated run time. Skyward Sword on the Wii suffered from many of the same problems, but its main source of contention has always been its motion controls. This Switch remaster makes them merely optional but even if they weren’t this is still the best of the trilogy of the flawed.

What’s most curious about Skyward Sword is that it has exactly the same producer and director as Breath Of The Wild, and was made only six years beforehand. Apart from a few shared elements, such as the onscreen stamina meter, you’d never guess at first, given the entirely different approach to exploration and world design. That and the fact that the greatest weaknesses of Breath Of The Wild – the lack of traditional dungeons and poor boss battles – are amongst Skyward Sword’s greatest strengths.

Although most people don’t realise there even is a timeline to the Zelda series, Skyward Sword takes place at the earliest point in the chronology so far explored (Breath Of The Wild’s setting is at the opposite end of the timeline). That doesn’t make much difference to the typically shallow storytelling, but Zelda is given a slightly more proactive role and Link’s origins as an apprentice knight, on a floating island called Skyloft, are explored in a little more detail.

Whereas The Wind Waker had a nautical theme Skyward Sword’s open world is in the sky, which is dotted with smaller islands filled with side quests and secrets. Or at least that’s the theory; in practice there are not nearly enough locations of interest and, like The Wind Waker’s ocean, you quickly realise there’s nothing much to see. Instead, all the real action is on the ground, with three main locations (forest, volcano, and desert) split up into a number of interconnected maps that are halfway between open world and more enclosed areas.

These areas include traditional dungeons – with several that are amongst the very best of the franchise – but what’s interesting, beyond just the quality of their design, is the way they lessen the distinction between what is the dungeon and what’s just a standard part of the overworld. Things go a little too far when, at one point, you end up visiting the same dungeon twice but there’s a clear hint here at how larger dungeons could be integrated into Breath Of The Wild’s sequel.

The biggest flaw Skyward Sword inherits from Twilight Princess is its bloated running time. Value for money is not a concern here, but the needless repetition of certain quest types certainly is. Having to complete multiple Silent Realms and fights with The Imprisoned is the most obvious example, but there’s also something fundamentally wrong in the way many one-off quests are constructed.

Skyward Sword wrings so much use of it is various maps it feels like every inch has a specific purpose, which sounds like it should be a positive but instead gives many of the more straightforward quests an irritatingly contrived feel, where searching for key parts and deactivated machines feels like checking off items on a shopping list rather than anything more adventurous.

The lesser quests are a shame as the more involved puzzles are very well designed. Dungeons like the Ancient Cistern and Sandship are incredibly clever and all the more so because they, and the game in general, rarely relies on the usual block-sliding and switch-pushing of previous games. Instead, there’s more emphasis on the environment and your items, with some particularly well designed sections in the desert that revolve around time-altering crystals and represent the best use of a light/dark work style mechanic since A Link To The Past.

Skyward Sword is inconsistent, with much higher highs, and lower lows, than either of its two predecessors. However, that’s still much more interesting than the bland competence of Twilight Princess and while Breath Of The Wild is a far superior game, hindsight makes it clear how its spirit of reinvention first took root in Skyward Sword.

We have purposefully left discussion of the game’s controls until last, as we didn’t want that to overwhelm the review – even though it’s arguably the most controversial element of all. Outside of VR titles, Skyward Sword has the most comprehensive use of motion controls ever seen in a big budget video game. Back in 2011 it was set to be a new paradigm, a Super Mario 64 moment for motion controls that would inspire generations to come. Which, of course, never happened.

Despite them working very well on a technical level the game was released too late in the Wii’s lifetime (just a year before the launch of the Wii U) and by that time popular opinion was already turning against motion controls. In this remaster all the original motion controls are replicated using the Joy-Cons, with the benefit that the right one has an analogue stick so you can control the camera manually for the first time.

The controls are precise and reliable and in terms of combat they’re still a revelation, as you have to get the direction, and sometimes angle, of attack right in order to defeat blocking enemies. Since the Joy-Cons mimic holding a shield and sword in your hand the action feels far more realistic than normal – for any game – while many of the bosses test your accuracy in various clever and imaginative ways.

The motion-controlled combat is excellent but that’s as far as the praise goes. Movement is controlled with the analogue stick but everything else, from using menus to aiming ranged weapons, is handled using motion controls and it never stops feeling contrived and fussy. It works okay, and is almost worth putting up with for the combat, but the temptation of normal physical controls is too great.

The new physical controls aren’t as simple as just pressing a button to attack though, as the movement of your Joy-Con is approximated by moving the right analogue stick (camera control is only possible by also holding the right shoulder button). This takes some getting used to, and can also feel unwieldly, but it’s all Nintendo could do given so many of the puzzles and enemies revolve around using very precise attacks. The ability to mix and match control options would be ideal, especially retaining physical controls for flying, but unfortunately it’s all or nothing.

There’s no way the new physical control system would’ve been invented on its own but as a simulation of the motion controls, that removes most of their frustrations, it works as well as could be imagined. But then this is a good quality remaster in general, with the visuals brushing up very well, thanks to their impressionist art style, and the removal of irritations like Fi’s frequently unwanted attempts to help and constant pop-up boxes describing items you’ve picked up a hundred times already.

Nintendo has clearly listened to criticisms of the game, with the option to fast forward text or just skip cut scenes altogether, which is of particular help in the otherwise leaden opening hours. This is unquestionably a better version of Skyward Sword than the one released a decade ago but the flaws run too deep for it to ever be regarded as a classic. It may not be the best entry in the series but it’s also far from the worst and, as now can be seen more clearly, one of the most innovative.

In Short: The most uneven of the 3D Zeldas but its highs soar well above its immediate contemporaries and while the motion controls are still hit or miss at least there’s now an alternative.

Pros: Some of the best dungeon designs in the entire series, that often overlap with overworld exploration. Excellent motion controls in combat and the visuals and music still impress.