The Legend of Zelda: Tears of the Kingdom has been given its age rating by the South Korea Rating and Administration Committee, implying that it's on track for its release date in May.

It's been a few months since we last saw The Legend of Zelda: Tears of the Kingdom, but when we did, we got the longest look yet at it and a release date of May 12. We haven't really heard anything from it since then, leading some to worry that it might get delayed again, but it looks like development is progressing smoothly as it's just been rated by a Korean rating board.

As reported by Gematsu, a rating for Tears of the Kingdom popped up on the South Korea Rating and Administration Committee yesterday, where it was given an age rating of 12 and up. According to Nintendo Life, a translated version of the rating mentions that it features "mild violence" and that "the stage of the adventure to find Zelda expands into the sky." 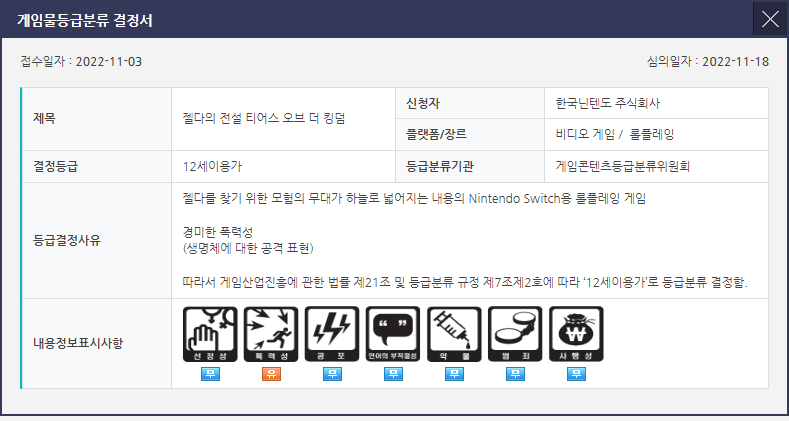 Although the age rating of 12 and up and the mention of mild violence aren't too surprising, the mention of the "adventure to find Zelda" seems to imply that Link and Zelda are going to be split up once more. This did seem to be the case in the reveal trailer for Tears of the Kingdom, but now it seems even more likely that we'll be trying to find her once more, something that Nintendo hasn't confirmed yet.

It may seem a bit early for Tears of the Kingdom to be getting certified when it's still half a year from release, but anyone who's seen this kind of age rating before will know that Korea is almost always among the first to do so and usually shares the rating months in advance of the game's launch.

This does seem to indicate that Tears of the Kingdom's development is progressing smoothly, however, as Nintendo wouldn't be sending it out to get verified if it wasn't content complete. There's still likely to be a lot of testing for bugs and overall game improvements, but it seems to be nearing the end of development in regard to what's actually in the game.