If you’re a fan of puzzles, pearl and the paranormal, then you’re going to love this new Lovecraftian horror by Frogwares.

When we first saw the teaser trailer for The Sinking City, we knew that we’d be diving into the weird and wonderful world of eldritch horror, mixed with Frogwares’ trademark investigative gameplay.

After paying a visit to Paris to dive into the upcoming title, we learned more about The Sinking City’s approach to being a private eye within a scourged metropolis of blood, wet and fears.

Thanks to BigBen, The Sinking City’s publisher, we were able to places ourselves in the soggy shoes of Charles W. Reed, a detective who has travelled to the waterlogged streets of New England in search of answers.

Upon our arrival, things are weird from the get-go; from mutated residents, hallucinations and murder scenes, it’s obvious that this is no ordinary city break.

The Sinking City is very reminiscent of the likes of Silent Hill 2, with its eerie atmosphere that resonates throughout the drowned streets of New England.

Since our protagonist is suffering from hallucinations and nightmares, there’s an emphasis on danger manifesting at any moment. 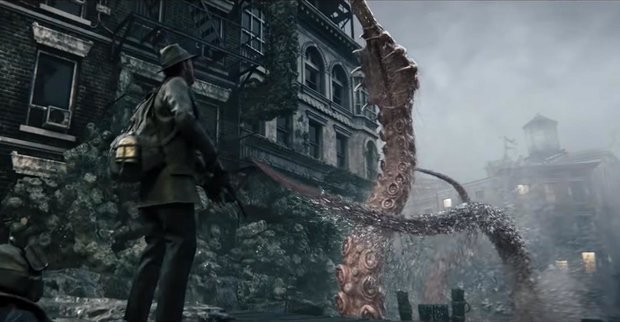 This means that the player will often be caught off guard by the sudden appearance of a Lovecraftian abomination while trying to progress, which really adds to the anxiety of The Sinking City.

Fans of the Sherlock Holmes games will instantly recognize The Sinking City’s detective mechanics, with clue discovery and environmental investigation being a core part of the gameplay.

Players will also have to interrogate suspects and witnesses, like a diluted version of LA Noire.

Charles can also harness his hallucinations, using them as psychic abilities, which can prompt visions of past events.

Implementing these premonitions helped with filling us in with what’s been happening with the residents of this madness induced city, as well as provided some hints as to how to approach the objective at hand.

This means that the player will often be caught off guard by the sudden appearance of a Lovecraftian abomination while trying to progress, which really adds to the anxiety of The Sinking City. 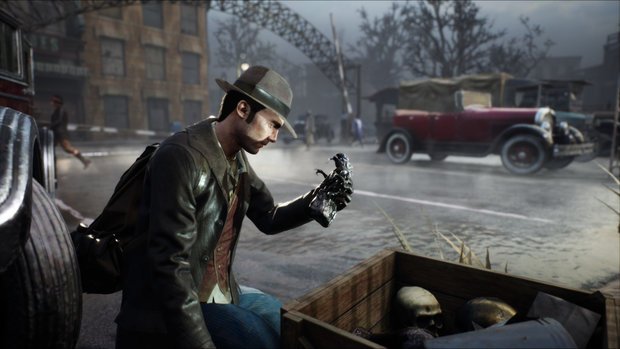 “Things are weird from the get-go – from mutated residents, hallucinations and murder scenes, it’s obvious that this is no ordinary city break.”

Like Frogwares previous titles, solving mysteries on behalf of NPC’s is a huge part of The Sinking City. While compiling evidence might appear to be straight forward, what really matters is your personal interpretation of events.

For example, you could conclude that someone is a murderer without all the facts, which in turn will affect in-game events and character interactions.

Placing importance on uncovering the truth adds an extra layer of suspense, meaning it’s not just the freaky manifestations of your mind that will keep you on edge.

As for the game’s visuals, The Sinking City does a fantastic job of depicting a flooded society on the brink of collapse.

It’s one thing to make things look wet within a videogame, but traversing the streets of the game felt genuinely damp, with our brains filling in the gaps in regards to what our senses experience.

When this drench depiction is mixed with the constructs of a collapsing society, we get to experience a horrifying environment, where comfort feels a million miles away.

This also enhances features of the game’s map, with areas that are highlighted as being particularly dangerous, mixed with paths that need to be traversed in a boat, much like in Metro Exodus.

During our preview, we got to experience some of the characters of The Sinking City, who are far from being the friendliest of inhabitants.

While our protagonist isn’t exactly pleasant to look at, with his distressed ruggedness and bloodshot eyes, the NPC’s of The Sinking City pose a whole new level of horror.

From ape men to fish/human hybrids that feel at home in The Shape of Water, the character design in The Sinking City is designed to not give our senses a break from the horrifying visuals of the rest of the game, which is a great way to keep up the suspense.

The Sinking City is out on June 27th for Xbox One, PS4 and PC