As the hands-off demo I saw last week began, Jala is on the bus home, taking a quiz titled "What is your Thirstsona?" As she begins, we're transported to an abstract world that seems to take inspiration from the jagged shapes and squiggly lines of '90s graphic design. Neon pink triangles, cotton candy blue grind rails, and lemonade yellow lightning bolts. This tutorial space is our introduction to the game's simultaneously pessimistic and romantic heart. Here, the Narrator — who looks exactly like Jala's sister — taunts Jala for "the disaster [she's] made of [her] life."

"Thirstsona is the way we track the player's choices and later, when we get into battles, we'll see how the Thirstsona affects the player's skills, too," says game director Chandana "Eka" Ekanayake.

Jala begins on a floating platform and must grind along rails and hang from pipes to reach the next. At each platform, she's asked a question about her dating preferences ranging from the trivial — "Your date shows up in a TERRIBLE outfit. People are staring. What's your reaction?" — to the more personal — "Have you ever been in love?" After that question, an imagined version of Jala's ex, Tyler, shows up, towering over Jala, to probe the reasons their relationship didn't work out. 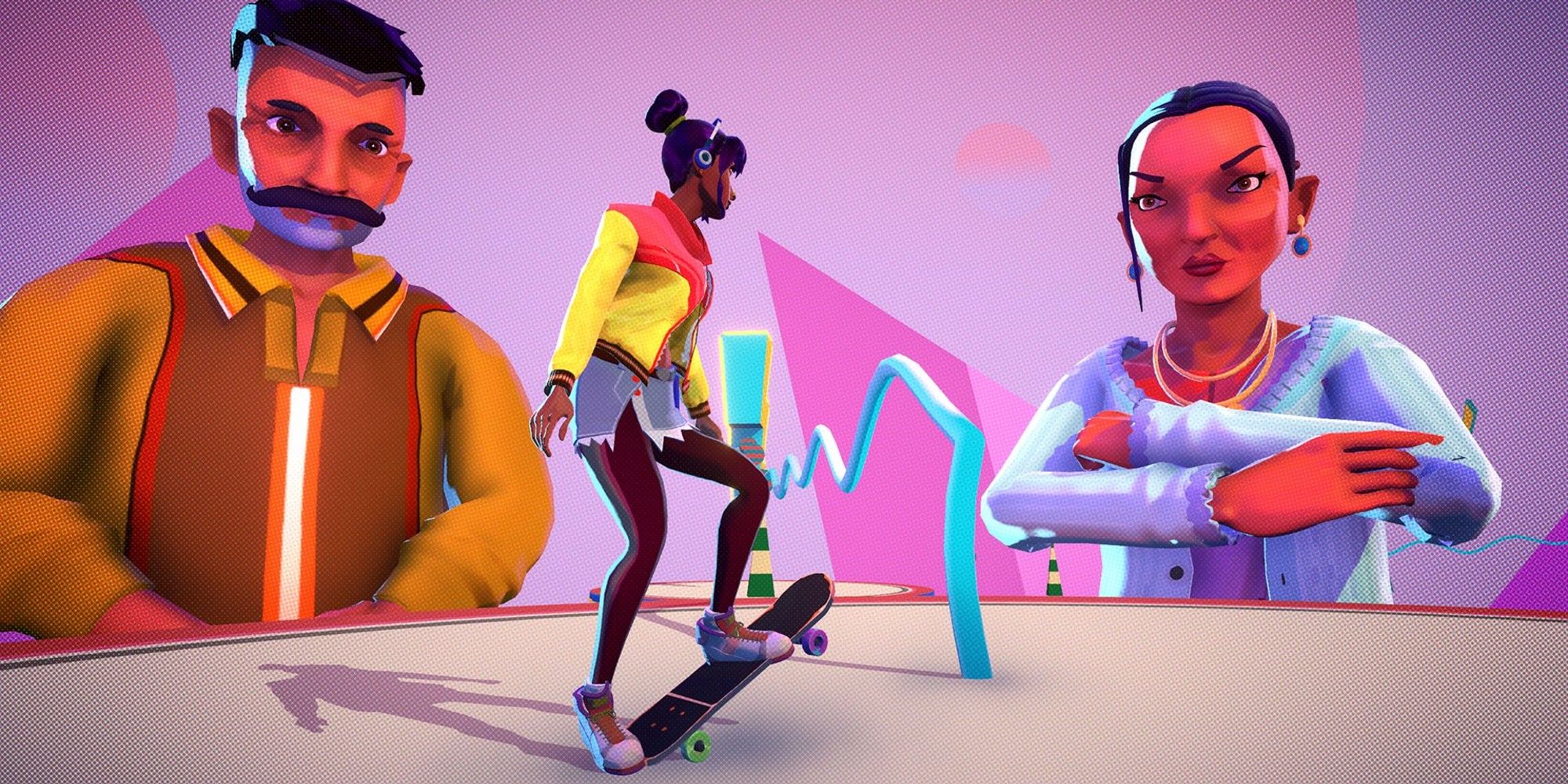 After completing the tutorial, Jala receives a Thirstsona. In the demo I saw, her result was "The Bohemian," with the description: "Every new face sets your heart ablaze. And why not? There's nothing wrong with a little experimentation. You spend your life defying expectations." To which the Narrator responds, "Is it because you're a rebel? … Or because you don't think you can live up to them?" Then, a results screen appears with one point slotted into the Bohemian profile.

Based on the interjections that I saw during the demo, it seems like the Narrator will have a consistently adversarial relationship with the player, not unlike Keanu Reeves' Johnny Silverhand in Cyberpunk 2077. Here, though, the negative thoughts aren't the result of a corrupted brainchip. Given that Jala's self-talk is personified as her sister, this aspect seems designed to get at the game's deeper themes. Ekanayake says that Thirsty Suitors is "exploring themes of generational trauma." To that point, during the Thirstsona quiz, Jala's mother and father also make appearances, with her mother needling her about her singleness and her father nudging her to figure herself out.

After the conclusion of the quiz, Jala arrives back in her hometown, Timber Hills. From the demo, Jala's past isn't completely clear, but it seems that she left town with a partner, Jennifer. That relationship has recently failed and Jala is heading home to recover from the breakup and gain emotional clarity. And, whether she wants to or not, being back in Timber Hills will mean being confronted by six of her exes. 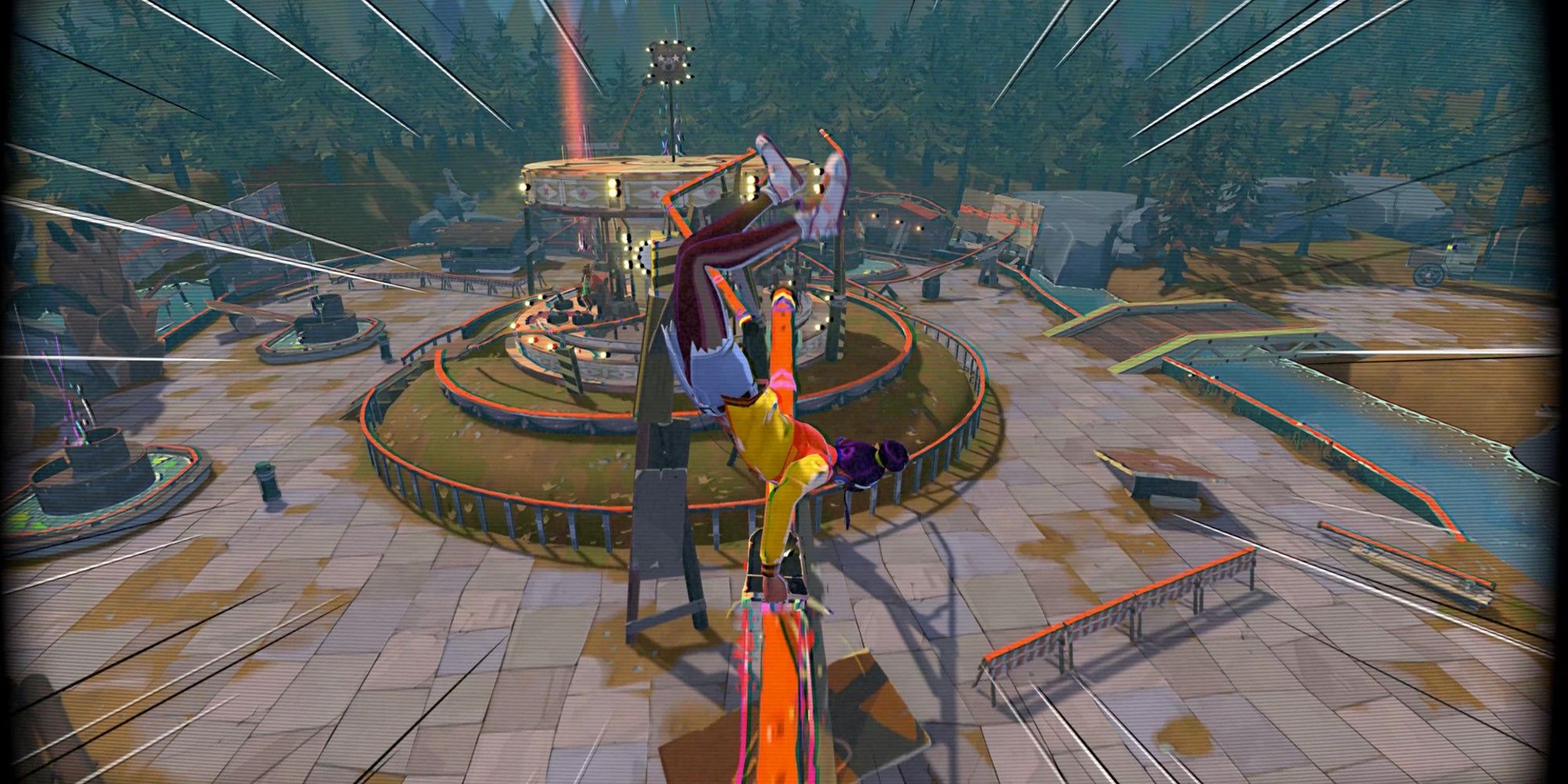 It's dusk when we arrive in Timber Hills, and there's a brief third-person exploration section downtown as Jala jogs along the street looking for someone to give her a ride for the last leg of the trip to her parents' house. She heads into a diner with a black-and-white checkerboard floor and a counter with the kind of red vinyl stools you can imagine teens gathering on to sip milkshakes. In an early example of the absurd amount of animation work that seems to have gone into Thirsty Suitors, Jala can initiate a QTE that culminates with a dog doing an ollie on Jala's skateboard and giving her a high five. Never has "Can you pet the dog?" received such an elaborate answer.

It's in this diner that Jala runs into her first ex: her handsome, but aggressively thirsty, third-grade boyfriend, Sergio. He wears a heavy gold chain necklace, a mullet, and a Lord Licorice-style mustache, and is bursting with insecurity disguised as macho confidence. While this relationship obviously wasn't as serious as others, Tyler's childish fixation on Jala allows for a low-stakes introduction to the game's elaborate boss battles. They do, indeed, take heavy inspiration from Paper Mario. Combat is turn-based, but in a unique twist, dialogue options are mixed in between the attacks. After Jala deals out her opening punches, Sergio suggestively says, "Did I mention I spent a year abroad? I learned a lot of new moves in Milan." Jala then has a choice between "Insult" and "Flirt." She can also do a Thirst Taunt, a flirtatious move that puts Sergio into a Thirsty Mood — the game's equivalent of the Confusion status effect from the Pokemon games.

While, for Jala, the emotional stakes in this opening fight aren't high, the production values on display are. Because there are only six major fights in the game, Outerloop was able to pour an immense amount of details and unique animations into each one. Midway through the fight, the diner setting disappears as we're transported to Sergio's Inner World, a Psychonauts-style representation of his psyche complete with barbells, muscle cars, and a sitar player. The Narrator explains that, in the Inner World, Sergio is as he sees himself, which includes being invulnerable to attack. To get past his defenses, The Narrator makes a suggestion.

"Like all South Asian men, all it takes to destroy Sergio's ego is a single word from his mom," she says. "But, since we can't bring her into this, we need to summon the next best thing… Our mom." 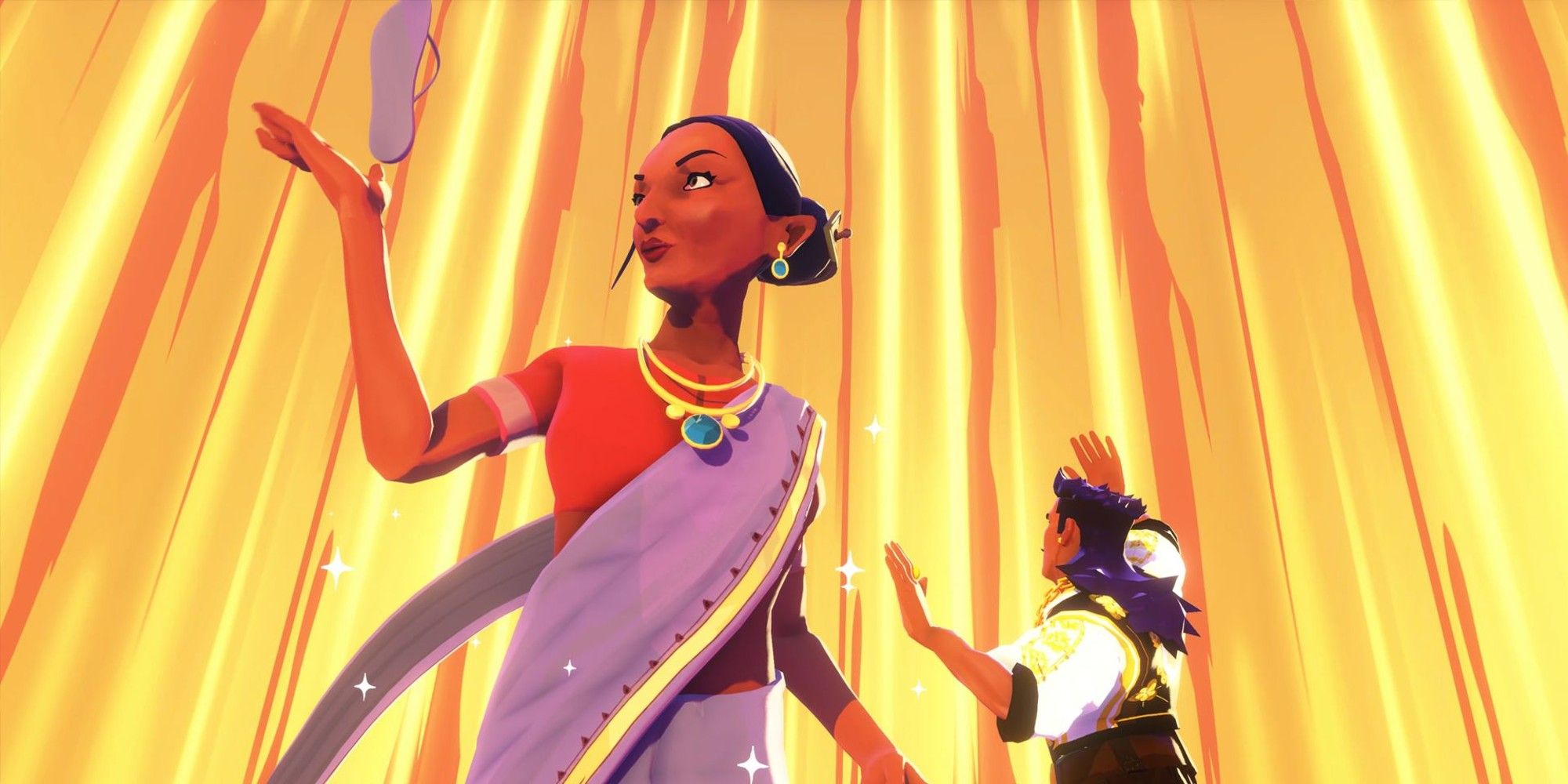 After completing a QTE, a giant version of Jala's mom rises up and swats Sergio with her shoe ("Not the chappal! Noooo!") flattening him like a squashed bug. After this, The Narrator suggests that Sergio's toxic masculinity might make him susceptible to a Rage Taunt. Jala does it and, for the rest of the fight, Sergio's head is on fire and he has a greater chance to either land a critical attack or miss completely. Jala can also do a Rage Attack and, in an example of the game's wealth of animations, this knocks Sergio out of his trousers. Embarrassed, he covers his underpants with his hands, picks up his pants, and jumps back into them.

Once Sergio is defeated, the pair make up, clasping hands against the brightly colored backdrop we included in our featured image at the top of this article. A prompt appears on screen that reads, "You've sorted out your differences. Now you can be friends… or something more?" In the demo, the player chose the "Insult" option at every turn, but the option to "Flirt" was always there. Based on what I saw, I'm not sure exactly how Jala's choices will affect her romantic options going forward. 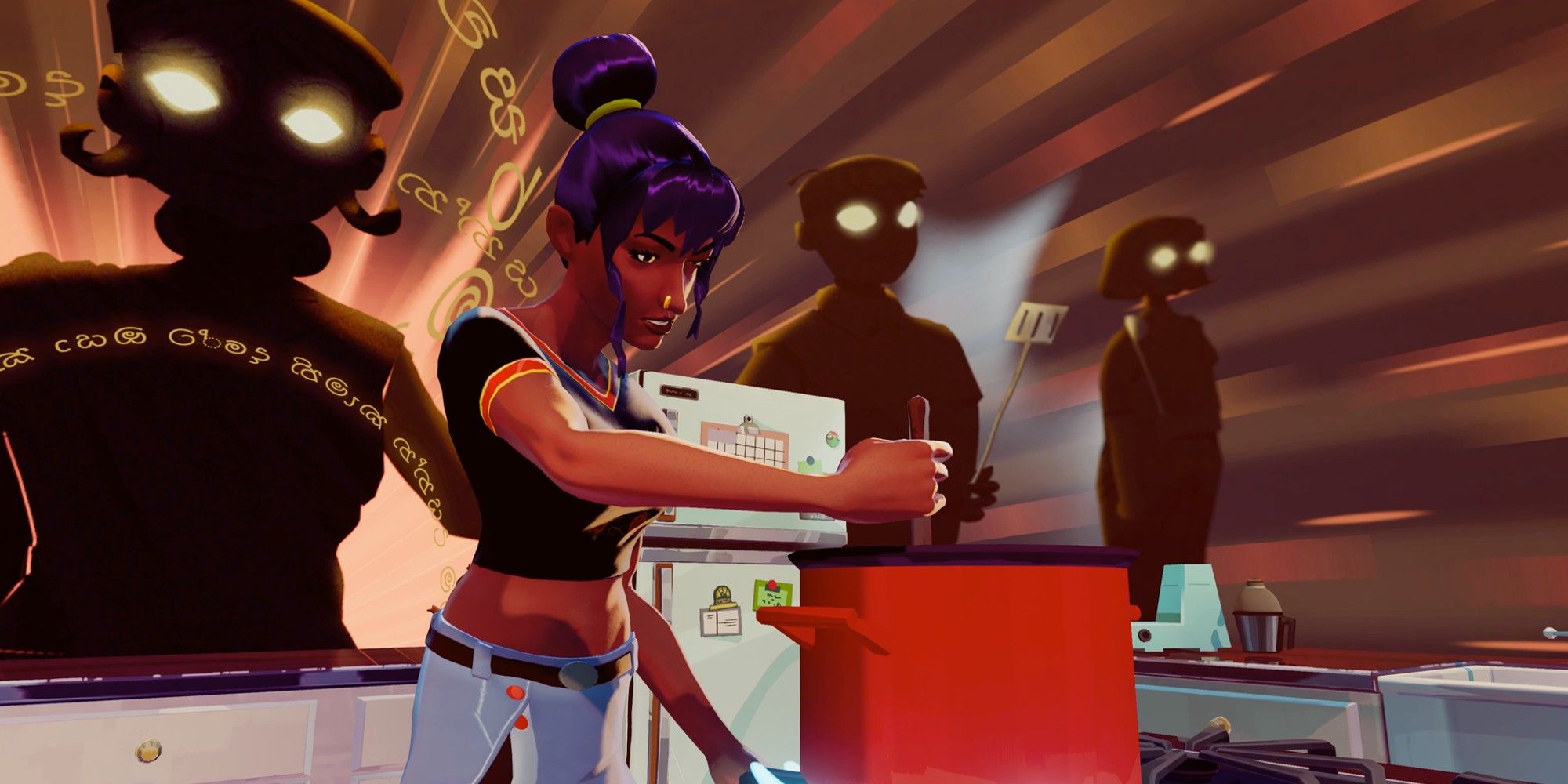 After a level-up screen, Sergio gives Jala a ride home. The game then cuts to a meeting that Sergio has called of Jala's exes. We don't get much characterization for most of them yet, but Tyler conclusively states that she doesn't want to be Jala's friend. Given that Tyler is featured in the game's key art, we know that attitude likely won't hold for the game's full six-to-10 hour run time. But, we'll have to wait until the game launches on Steam to see how Jala's relationship with her exes and family members plays out outside of her head. The Annapurna Interactive published game has no release date yet, but the Steam page says it's "Coming Soon."