The assault rifle is the bread and butter of guns in Tiny Tina's Wonderlands. What could embody the shoot-and-loot mood more than a gun you never have to reload? Legendary assault rifles take this one step further, adding whacky features like saw blades, magic, and even explosive bread into the mix.

Legendary weapons can be hard to track down if you are just starting out. If farming certain bosses is not doing the trick for you, it might be time to go back on the Lucky Dice grind to increase your Loot Luck. 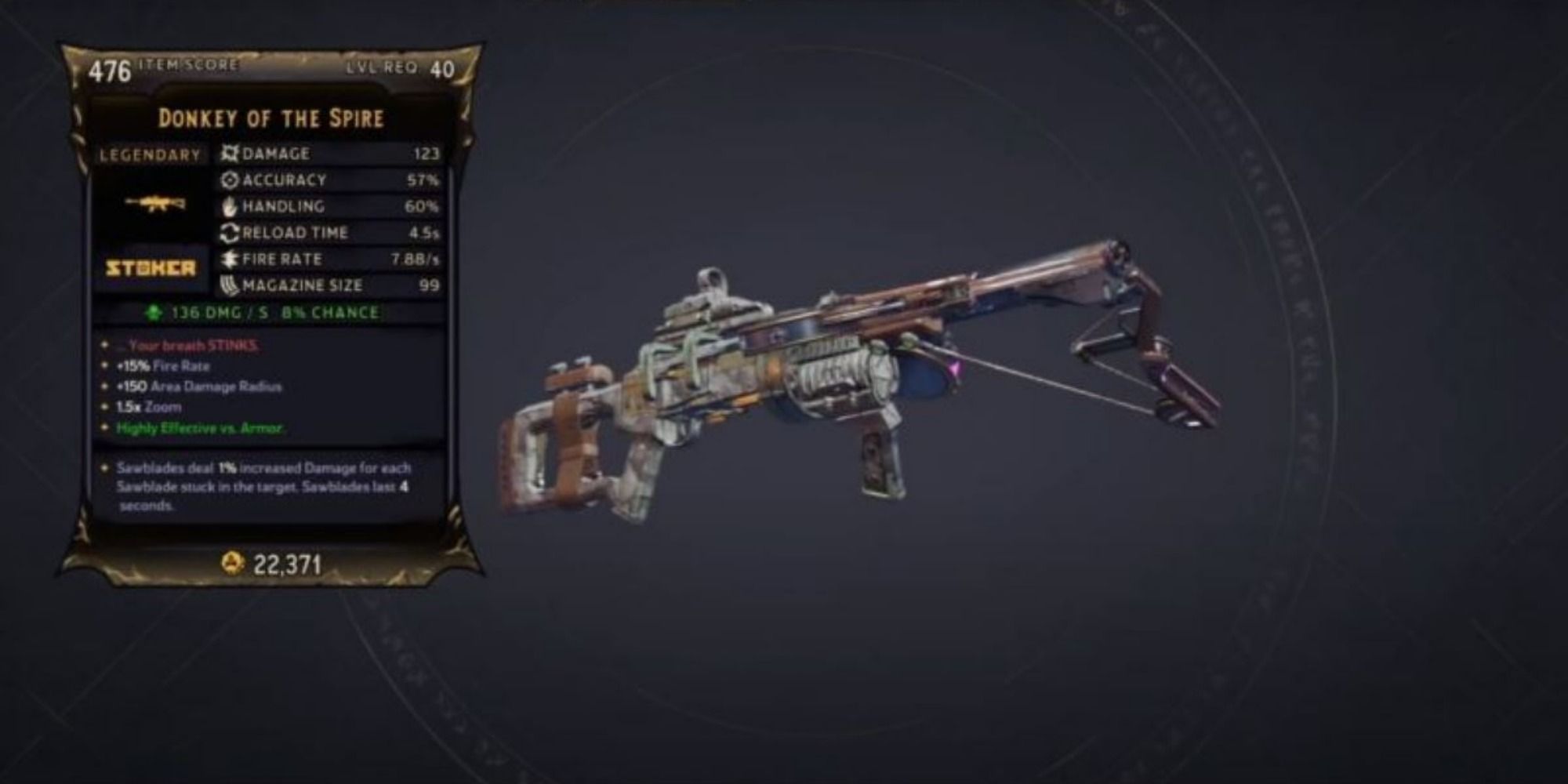 It is only fitting that the Legendary with a reference to Shrek does Poison Damage. Sadly, despite its namesake, the Donkey is a pretty ordinary Legendary assault rifle. It shoots saw blades out at a rapid pace, increasing the damage you do exponentially for each Sawblade still stuck in a target.

The only place this weapon drops is from the Droll the Troll mini-boss at the Ancient Obelisk in Queen's Gate, only accessible after Torgue blows up the ocean. 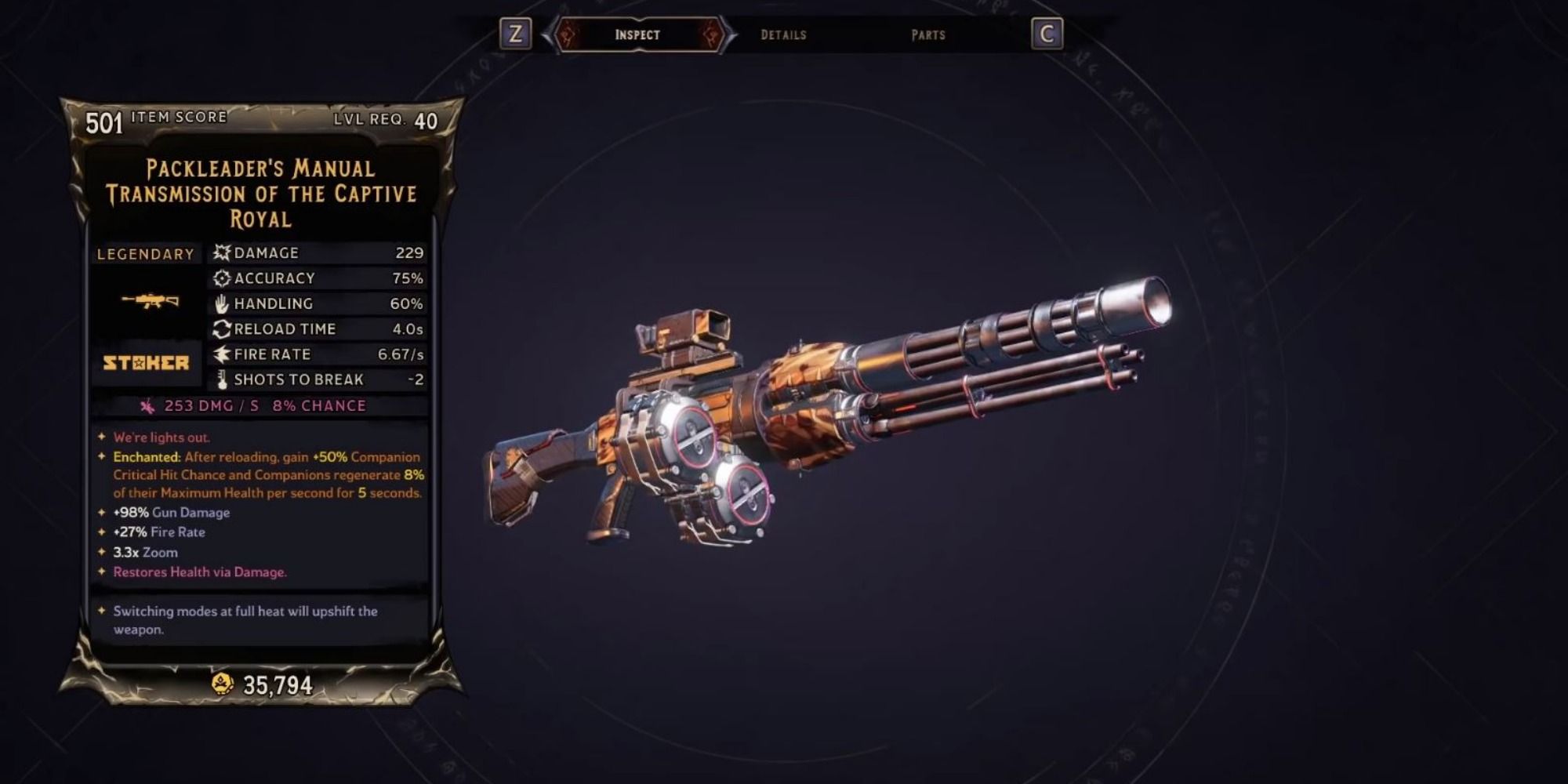 This Legendary weapon is hilarious in concept, but not very powerful in execution. The Manual Transmission functions exactly as you would think. As you fire it, you will notice that the number on your ammo clip will grow red. If you change the "mode" at this moment, the gun will "shift gears", increasing the fire rate. If you hit the "gear shift" every time the ammo numbers become red, you can amp up the fire rate all the way. However, the moment you jump the gun or change modes too late, the gun will literally stall out.

Obviously, this makes the gun a little tricky to use, and even at its most powerful, it doesn't pack the punch you might hope. The only place to loot this Legendary is from the boss fight against Vorcanar in Mount Craw. 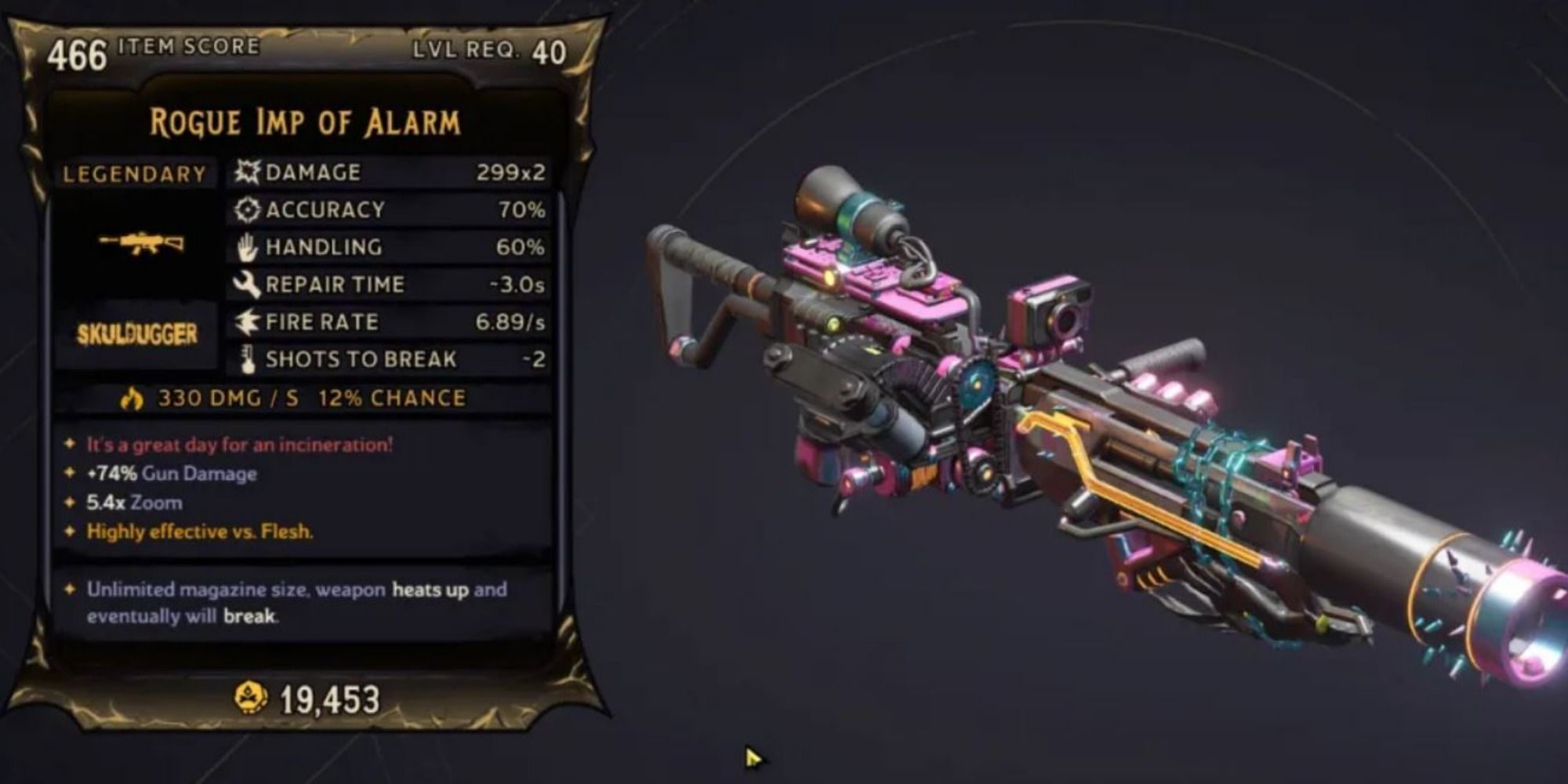 What could be cooler than a weapon that literally transforms into bats when it runs out of ammo? Any weapon in Tiny Tina's Wonderlands that spawns a companion when reloaded or becomes some sort of secondary spell is a huge boon.

The Rogue Imp does not have much else to offer when it comes to "oomph", but it is still pretty neat. This Legendary is only a world drop, so it could take a while to loot. 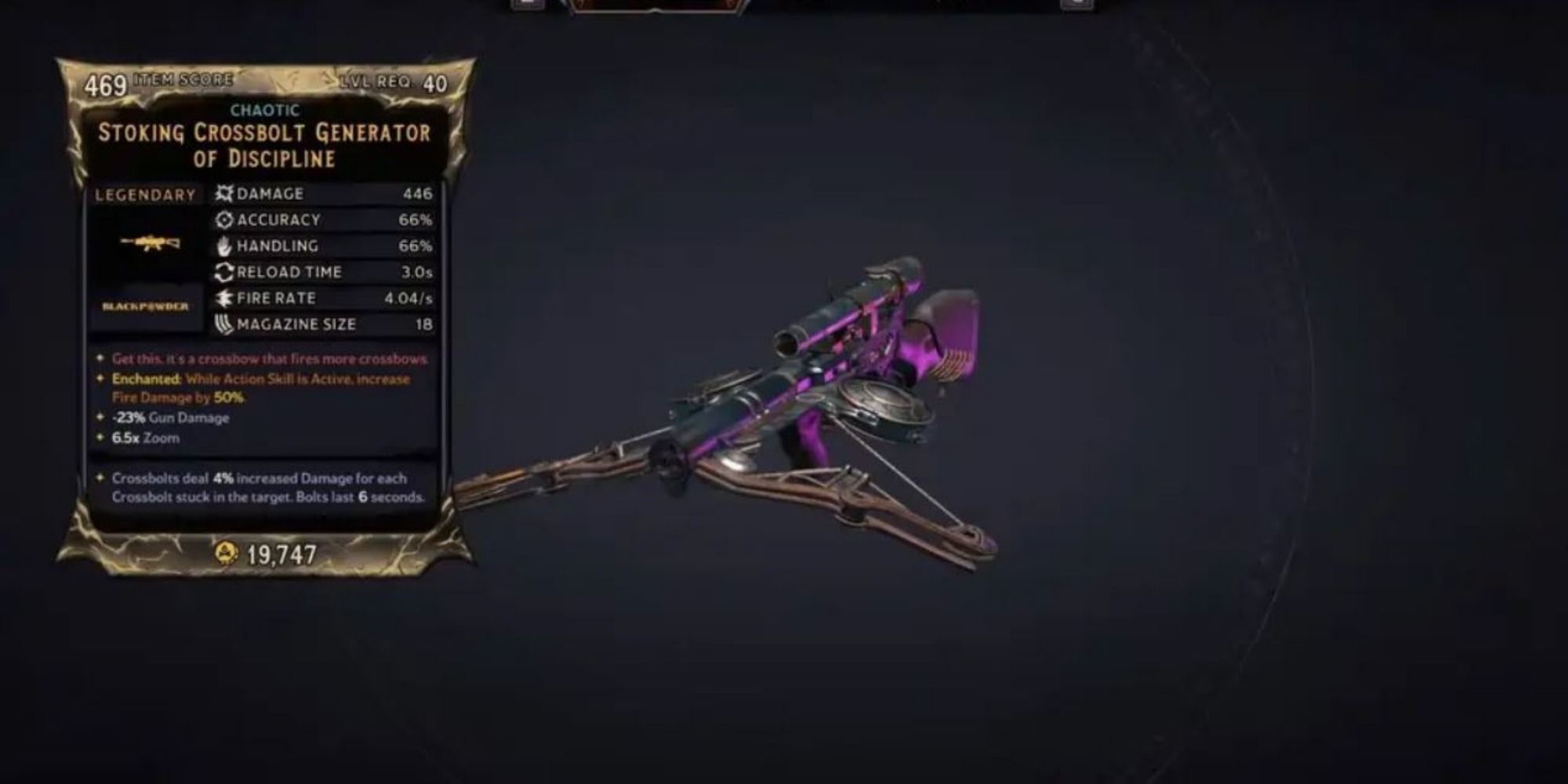 This assault rifle is a world drop, but for a better chance at looting, try farming the Kastor The Normal Sized Skeleton boss fight in Tangledrift. 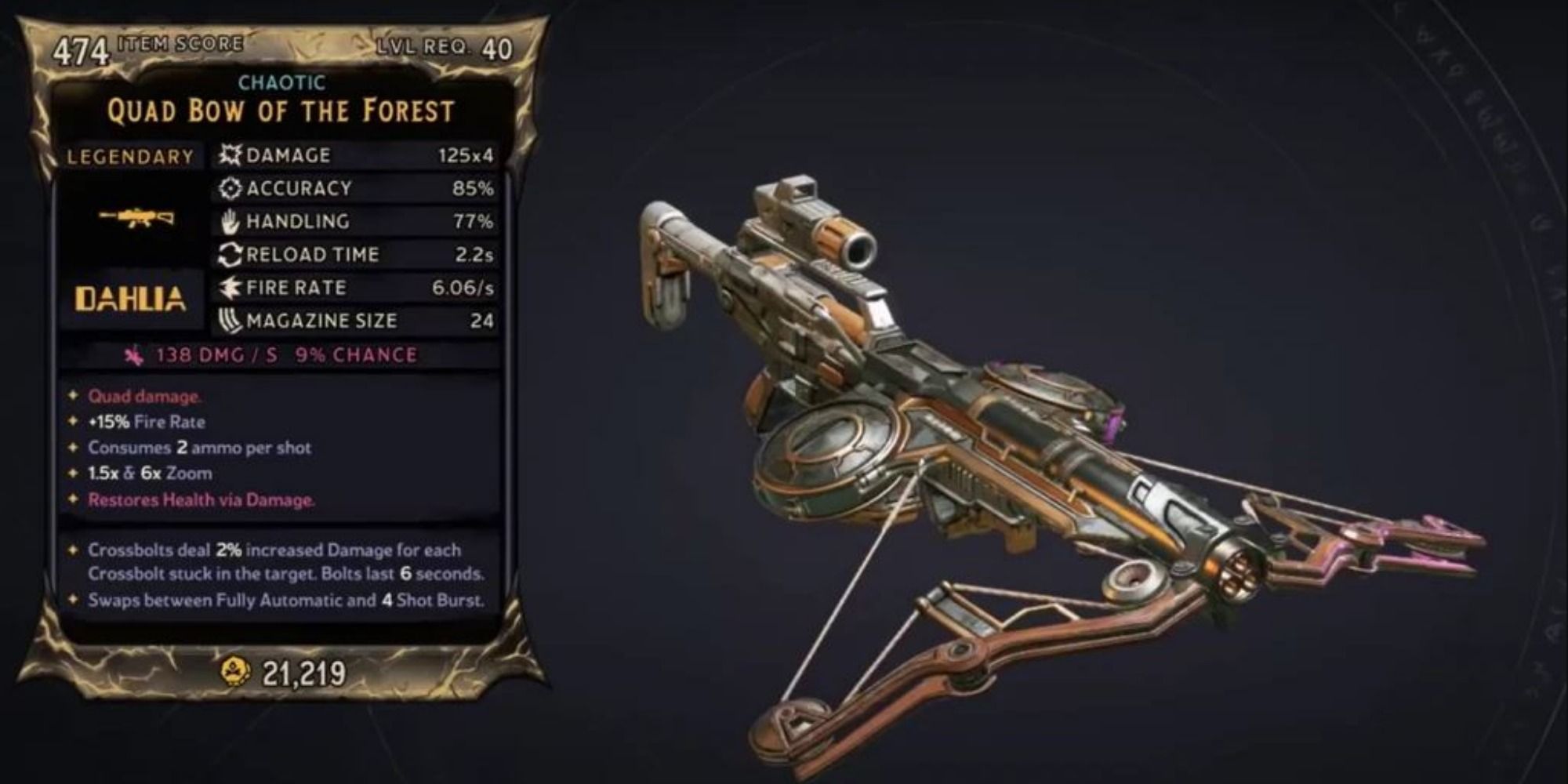 The Quad Bow Legendary might not be quite as satisfying as sawing off the limbs of necromorphs in Dead Space, but it comes pretty close. This crossbow-style assault rifle shoots bolts out in either a horizontal or vertical line, covering a pretty big area. It does have a bit of drop-off, so it is better used at a mid to close range.

This weapon is only a world drop, so it could take some time to loot if you're looking to find it for yourself. 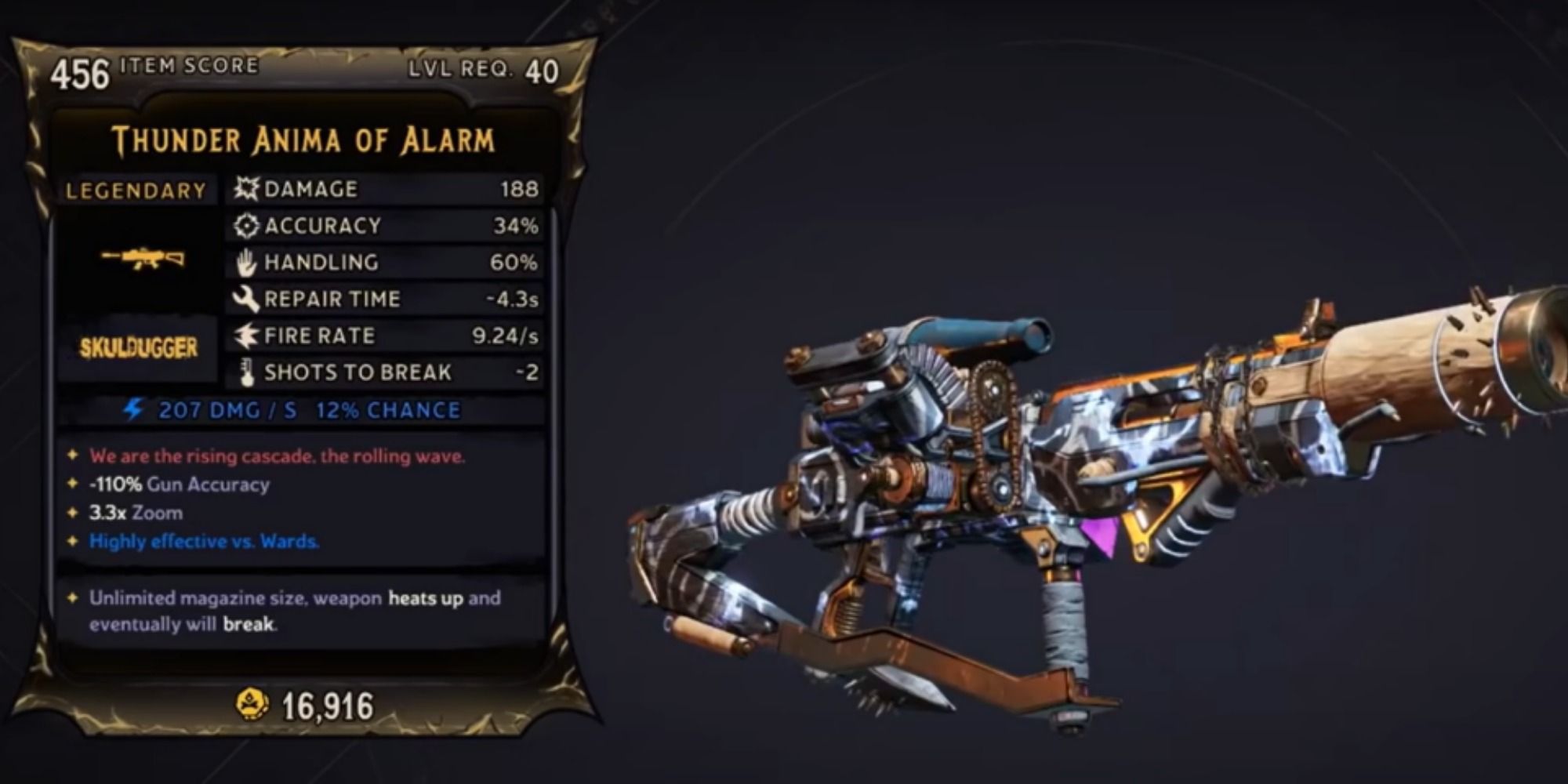 Lightning Damage is pretty important as you progress through Tiny Tina's Wonderlands, greatly improving any weapon's efficiency against mobs with Wards. What makes the Thunder Anima especially powerful is that it can chain that Lightning Damage to other nearby enemies as well.

The Thunder Anima is a world drop, meaning it cannot be farmed from any specific boss fight, but instead drops from any old mob. 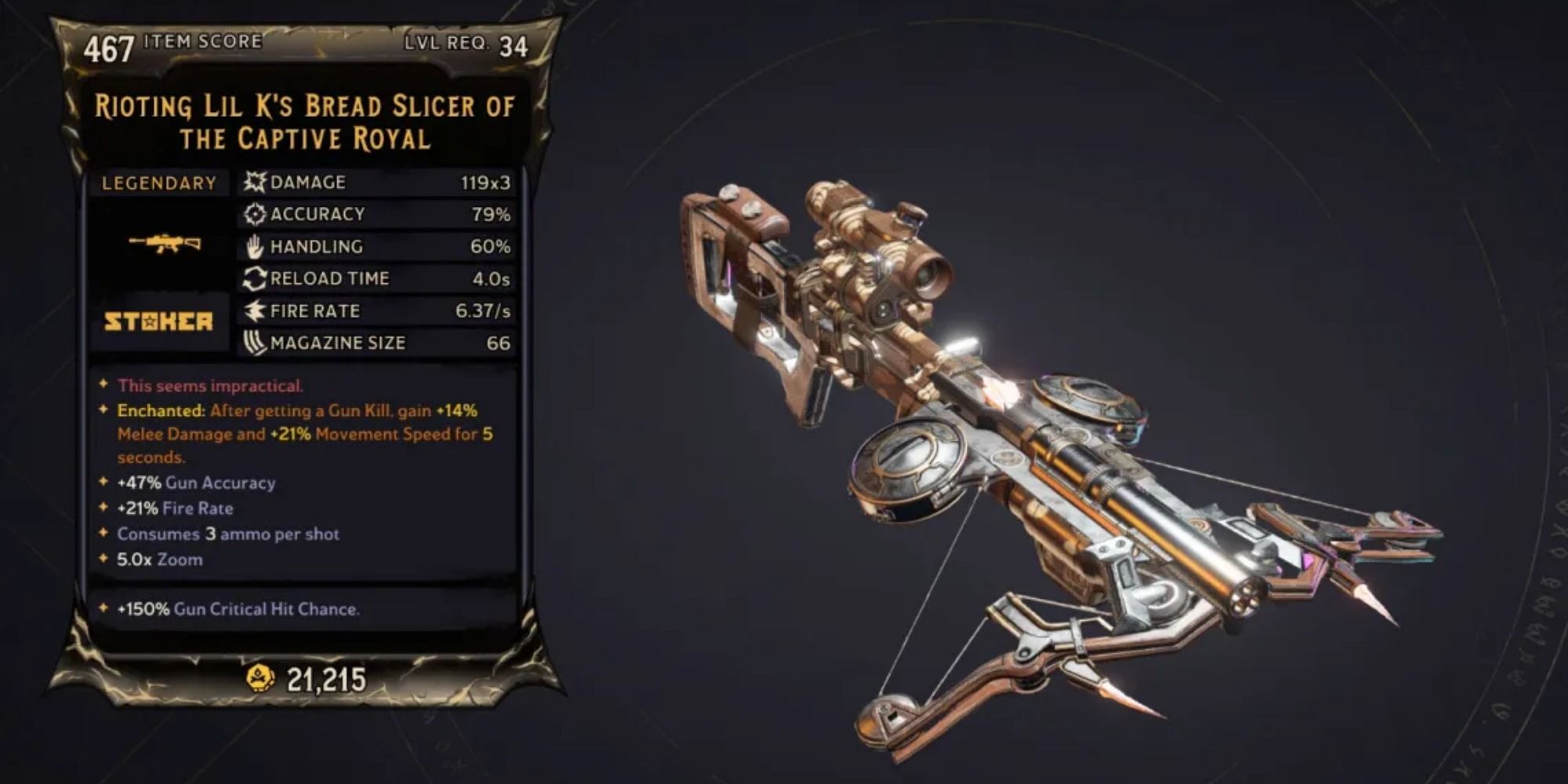 Lil K's Bread Slicer has two modes. Bouncing magical saw blades and exploding bread grenades. Need we say anymore? The primary fire packs quite the punch all on its own, but this Legendary assault rifle wins the whole game the moment the explosive baguettes start bouncing around the battlefield.

If you want to be as cool as Lil K you will have to do quite a bit of grinding, because Lil K's Bread Slicer is only a world drop loot.