With its zigzagging storyline, Triangle Strategy is the sort of role-playing game that's perfect for multiple playthroughs. By this point in your journey, you will have already made a couple of colossal choices that have dictated which version of Chapter Eight you have received. In this version, "Weather the Storm," a series of main story scenes cascade toward yet another challenging decision.

Will you side with a relentless foe against a conniving new threat? Or are old wounds too painful for such considerations? Read on to get the full scoop.

Serenoa's bad days keep getting worse when news reaches the castle of Roland's impending execution. Another scene, popping up on the map shortly after the first, brings to the house's attention Sorsley Ende's nefarious new plot.

Receiving word of Serenoa's stunning request for aid, Gustadolph contemplates his next course of action.

Side Story: Citadel of the Sands

Sorsley and Booker prepare for their invasion of the Wolffort Demesne.

Frederica is increasingly disillusioned with the war. All things considered, it's hard to blame her for it.

We interrupt this scene-by-scene replay for something relevant to your reading — Character Stories. By now, you've likely recruited at least a handful of fresh faces to the cause. Recruitable characters seldom play a vital role in the main storyline, but typically possess engaging little plot arcs of their own. It can be a challenge deciding who to keep leveled and geared for the game's big battles, so remember that if a unit is even just slightly below the recommended level for a fight, they will gain experience points at a rapid pace. This can be exceedingly useful for getting a weaker optional character in excellent shape. 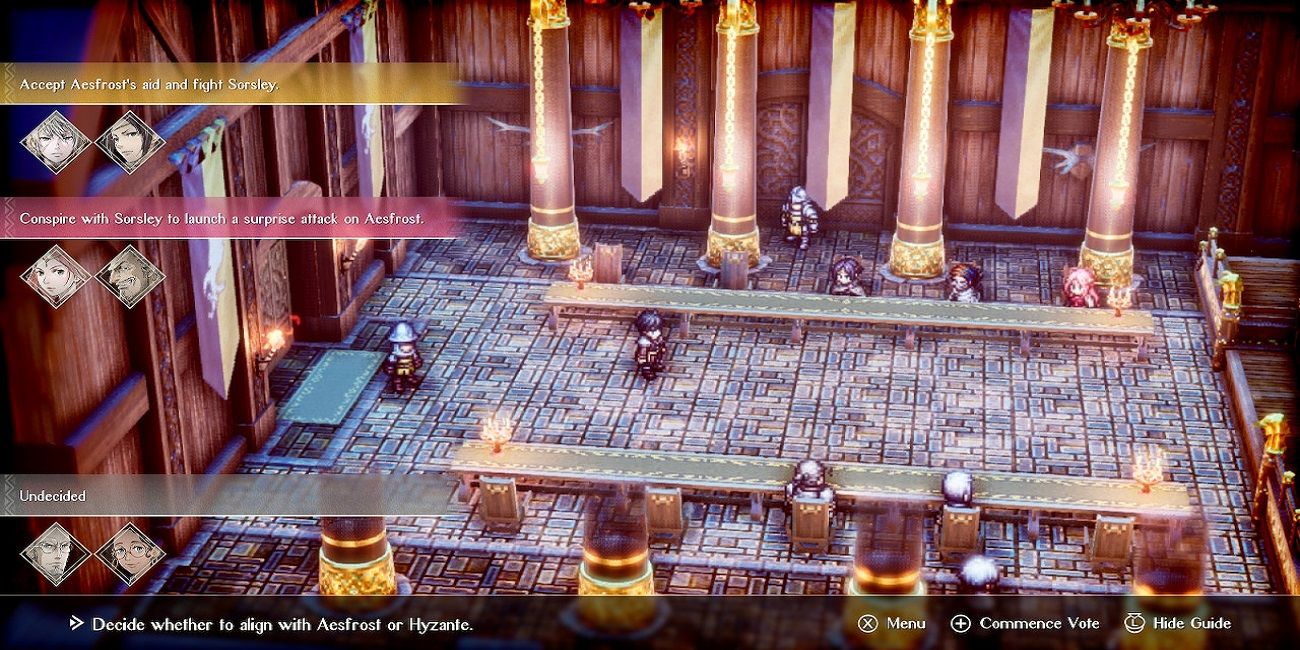 And thus, we arrive at this short half-chapter's important playable moments. Your goal here is to convince the team whether to accept Aesfrost's aid and fight Sorsley or conspire with Sorsley to launch a surprise attack on Aesfrost. Needless to say, the ramifications are huge either way.

Will House Wolffort ally with the Holy State of Hyzante, their goal to decimate the Aesfrosti forces? Or is Sorsley simply too snakelike, and Gustadolph too cunning to defy at this juncture? Your choice, as ever, sets the next course in motion.