If you haven’t already jumped on the rather hilarious Two Point Hospital on your console of choice, it may be worth waiting until March before you do so. Sega has just announced that Two Point Hospital: JUMBO Edition will be hitting PS4, Xbox One, and Switch on March 5, 2021, with all of the game’s DLC in tow. This is also technically a confirmation of the final two DLC packs coming to consoles, which have been missing for nearly a year now.

On PC, developer Two Point Studios had released a slew of post-launch add-on content that resulted in four total mini-expansions. While the console version had released with two of those, the final two packs were mysteriously absent from any updates. That’s probably related to COVID-19, but fear not! If you don’t want to rebuy the entire game, both the “Close Encounters” and “Off the Grid” packs will be available for download on the same day that JUMBO Edition releases. 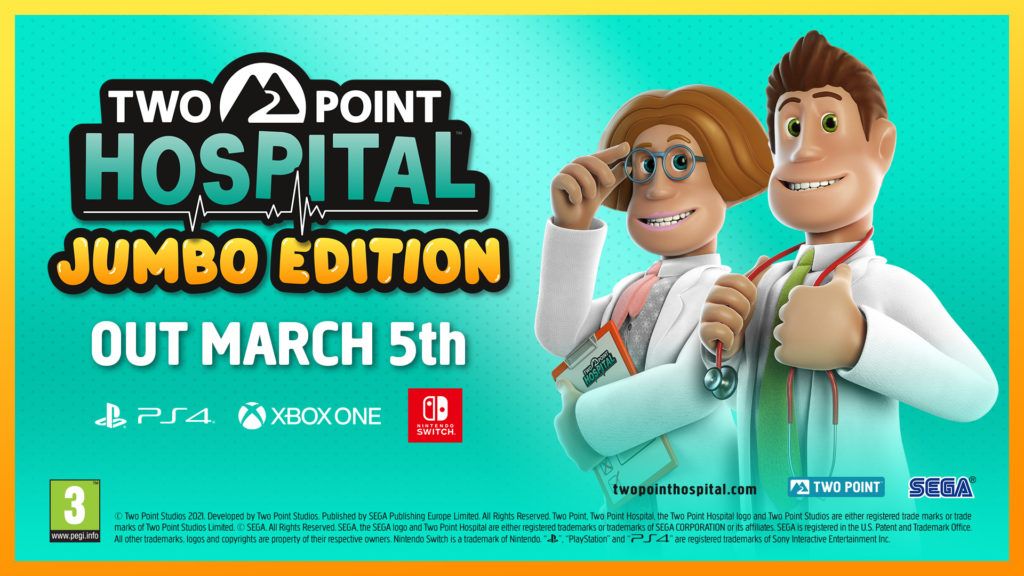 If you aren’t ready to buy some extra content, a free update for the base game will also be launching alongside this new version. Sega hasn’t specified what that update contains, but it’s likely some new items to adorn your hospital halls with.

JUMBO Edition is, essentially, a “Game of the Year” version of Two Point Hospital. While I wouldn’t say you need all of the DLC to feel like you’ve got a complete game, the extra content adds some additional charm to the proceedings. There’s never a bad reason to jump back into Two Point Hospital, especially with how structured its campaign is.