Debugging machine learning (ML) models isn’t a walk in the woods. Just ask the data scientists and engineers at Uber, some of whom have the unenviable task of digging into algorithms to diagnose the causes of their performance issues.

To lighten the workload, Uber internally developed Manifold, a model-agnostic visual tool that surfaces the differences in distributions of features (i.e., the measurable properties of the phenomena being observed). It’s a part of the ride-hailing company’s Michelangelo ML platform, where it’s helped various product teams analyze countless AI models. And as of today, it’s available in open source on Github.

“Since highlighting [Manifold] … earlier this year, we have received a lot of feedback from the community regarding its potential in general purpose ML model debugging scenarios,” wrote Uber machine learning software engineer Lezhi Li in a blog post. “In open-sourcing the standalone version of Manifold, we believe the tool will likewise benefit the ML community by providing interpretability and debuggability for ML workflows.” 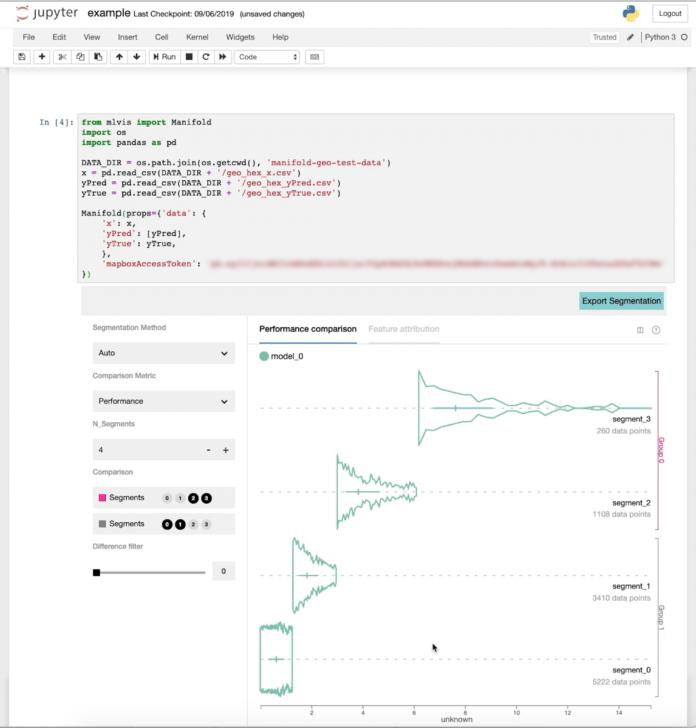 Manifold leverages what’s called a clustering algorithm (k-Means) to break prediction data into segments based on their performance similarity. As for features, they’re are ranked by their KL-Divergence, a measure of difference between two contrasting distributions. Generally speaking, in Manifold, higher divergence indicates a given feature correlates with a factor that differentiates two segment groups.

Manifold includes support for a range of algorithm types including general binary classification and regression models, and on the visualization side, it’s able to ingest numerical and categorical as well as geospatial feature types. It integrates with Jupyter Notebook, one of the most widely adopted data science platforms for data scientists and ML engineers, and it boasts interactive data slicing and performance comparisons based on per-instance prediction loss and other feature values.

Manifold comes packaged for standalone or packaged installation. Once it’s installed, there’s two ways to input data into it: via a comma-separated file or a programatic conversion.

Uber has been on something of an open source tear. The release of Manifold comes after the unveiling of Plato, a platform for building, training, and deploying conversational AI and machine learning. Early last year, it debuted Ludwig, an open source “toolbox” built on top of Google’s TensorFlow framework that allows users to train and test AI models without having to write code. And in February 2019, it launched the Autonomous Visualization System (AVS), a standalone web-based technology for understanding and sharing autonomous systems data.