As you transition from Farbane Woods to the Dunley Farmlands, you will encounter some powerful roaming bosses. V Rising is not a forgiving game, and these enemies can be especially nasty opponents if they catch you unawares. Vincent The Frostbringer is particularly dangerous, as he applies heavy crowd control, and can end your fight extremely quickly.

This guide will instruct you where to find Vincent The Frostbringer, the best strategy for battling him, and what he will reward you with, should you claim victory. 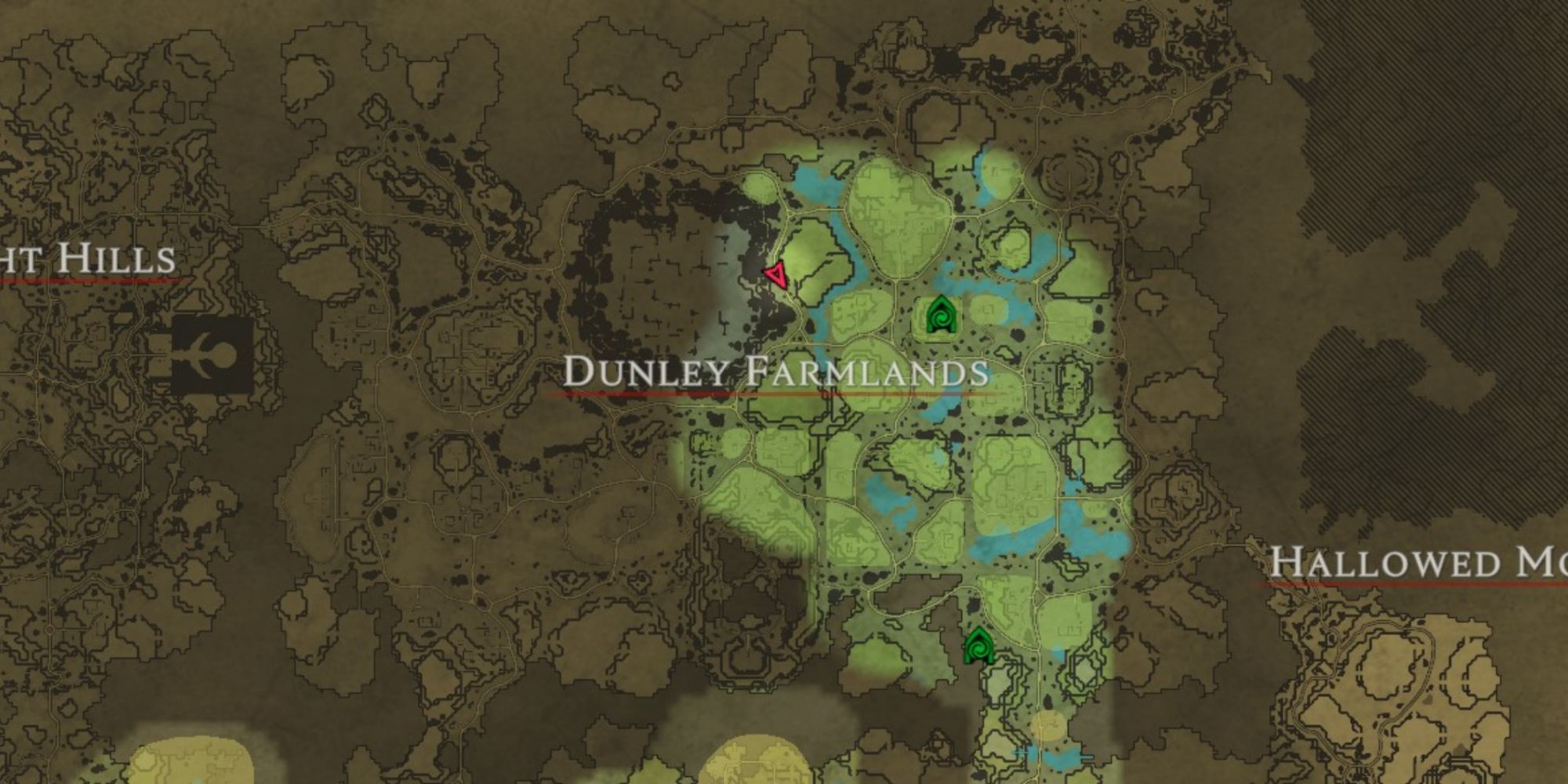 Vincent The Frostbringer is one of a number of roaming bosses that can be found patrolling the roads of the Dunley Farmlands. He begins his journey from the Militia Encampment, and wanders the paths alongside two Militia Crossbowmen, looking to spoil your day.

The Encampment lies to the North East of the Haunted Iron Mine, and should you not find him there, running aimlessly around the roads is not an efficient option. Using your Blood Altar is heavily recommended to track Vincent down, as it will save you a lot of time and effort. Due to him being found on the roads, you will not have to spend time clearing out any additional enemies and can engage him straight away. 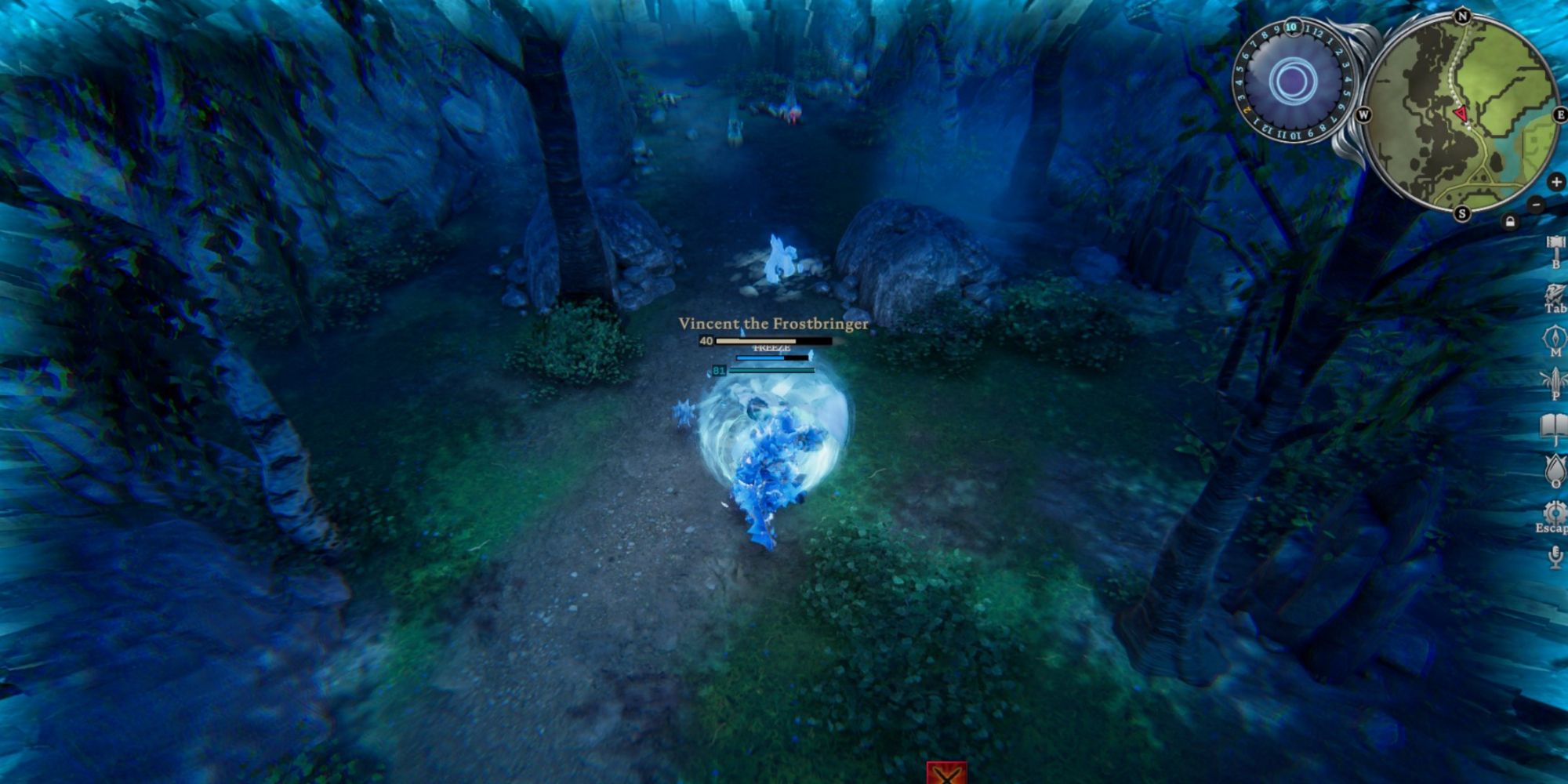 Vincent The Frostbringer will fight you with a number of impactful abilities, and he may require one or two attempts to be killed. He has a fast melee attack that deals only a low amount of damage but will cleave in front of him in an arc, so keep circling to his rear in order to avoid any chip damage. Kill off the two Militia Crossbowmen that patrol with him at the beginning of the fight and you should have plenty of room for your battle.

His first move consists of raising his Frost Shield in front of him, blocking any incoming attacks or spells and applying a slow to any enemy striking him. This move lasts for a couple of seconds, so you can pretty easily just wait it out, or circling to his rear will allow you to hit him without suffering the debuff.

Vincent will occasionally shoot out four to five ice projectiles, that, like most of his kit, will apply a heavy slow to you for a few seconds. They spray outwards in an expanding cone pattern, and travel quite quickly, so you may find yourself being caught by a couple of these throughout the fight. Either save your Travel Ability to dodge the initial hit or to gain distance between yourself and Vincent should you become slowed.

The most difficult ability you will have to deal with is Vincent's triple charge. He will surge towards you extremely quickly, dealing high damage and stunning you. Similar to Quincey The Bandit King, your Travel Ability will be your best friend in avoiding this, and you should try to not remain in front of the boss for any prolonged period of time.

Vincent's final and most powerful move is to cast a large AoE Frost Nova, which deals damage in an area around him and applies a slow. It is not worth tanking this spell, so simply run away from him when you see him begin to cast. The wind-up is easily long enough for you to escape the area.

For your gear set-up, try to bring an Iron Weapon, with the Sword or Slashers both being good options. If you have beaten Beatrice The Tailor, then you should be able to craft some Hollowfang Battlegear for your Armour. Vincent has a combat level of 40, so expect him to be a struggle should you still be using Tier One Copper gear. For spells, the typical build of Shadowbolt and Chaos Volley will work well here, as there are not really any additional enemies to cleave down. 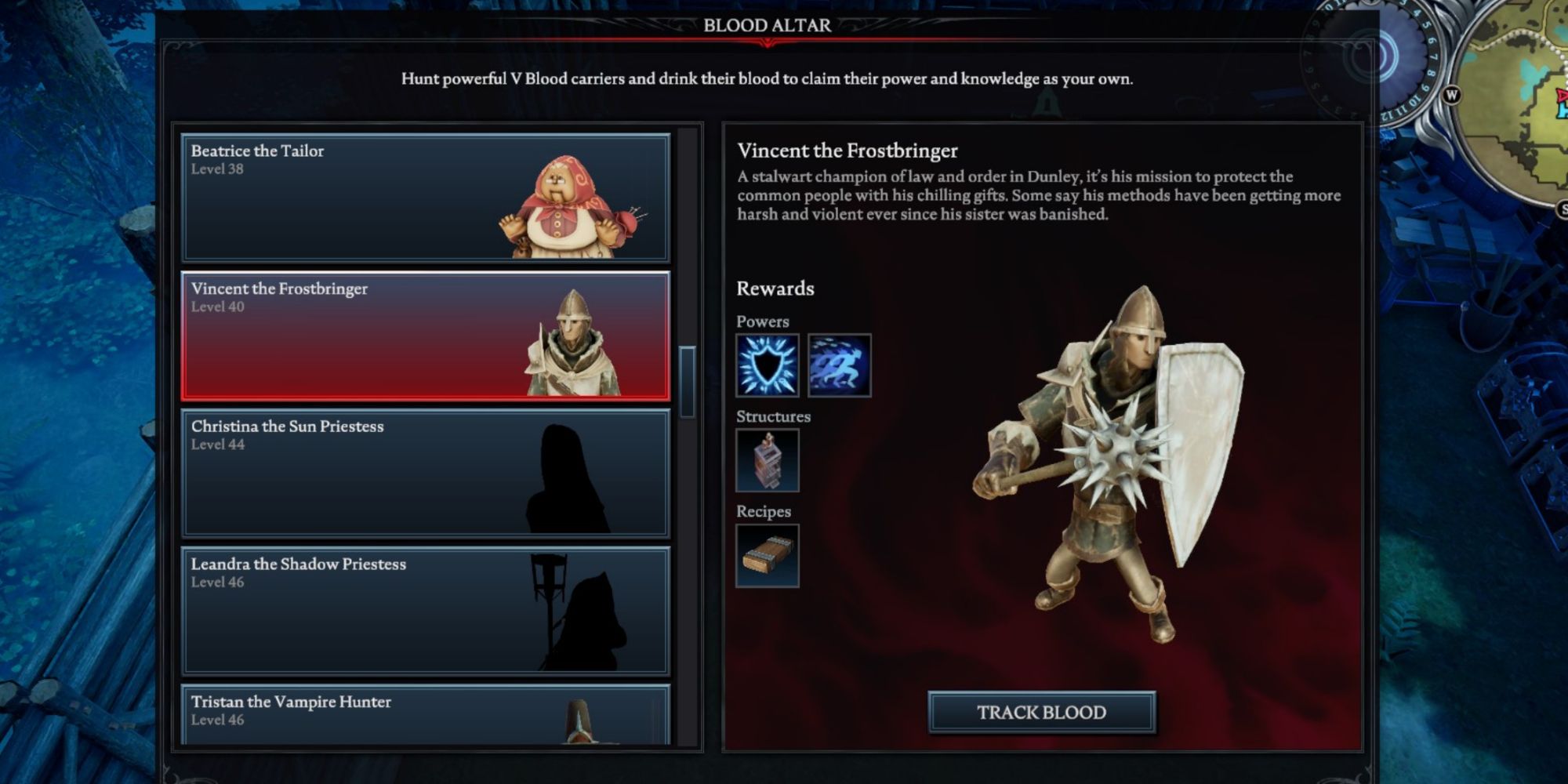 Vincent is an important boss to defeat, and draining his V Blood will grant you a few decent rewards. First up is the Frost Barrier Vampire Power, which simulates Vincent's move during the fight. Increasing your movement speed, the shield will block all melee and projectile attacks in front of you, and spawn a wave of frost damage out from you whenever the shield is attacked. In a perfect world this can rack up some serious value, but the duration is only two seconds long, so you may find this a difficult spell to make full use out of.

Another spell you will gain is the Veil of Frost, which involves dashing while shielding yourself and empowering your next attack with increased damage and a Frost Nova on hit. A decent defensive option for your Travel Ability, it suffers from competing against the Veil of Illusion and Veil of Chaos, and there are not many situations you would prefer to have this than the extra movement granted by those others.

Vincent also provides you with the Prison Cell structure, which can be used to capture and imprison a charmed human. The uses for this are limited, but it can be fun to build up an easy-to-reach blood supply within your castle.

Lastly, you will gain the Reinforced Plank recipe, which will be important later on in the game when it comes to improving your gear. This is the reward you are really after and raises Vincent from optional to mandatory status.