The Desalination Facility is among the more open-ended stages in Vengeful Guardian: Moonrider. It has large open rooms, and there is a decent amount of space to explore the different nooks and crannies. You will also be spending a lot of your time submerged in water, fighting robot fish.

Related: Vengeful Guardian: Moonrider – Bioweapon Lab GuideMost notably, this level has a pretty difficult mid-boss, and a somewhat confusing second stage. To top it all off, the two Upgrade Chips located on this stage can be a little difficult to acquire, with one of them being completely missable. However, this guide will provide you with a quick route for working through Desalination Facility, while also pointing you in the direction of every collectible. 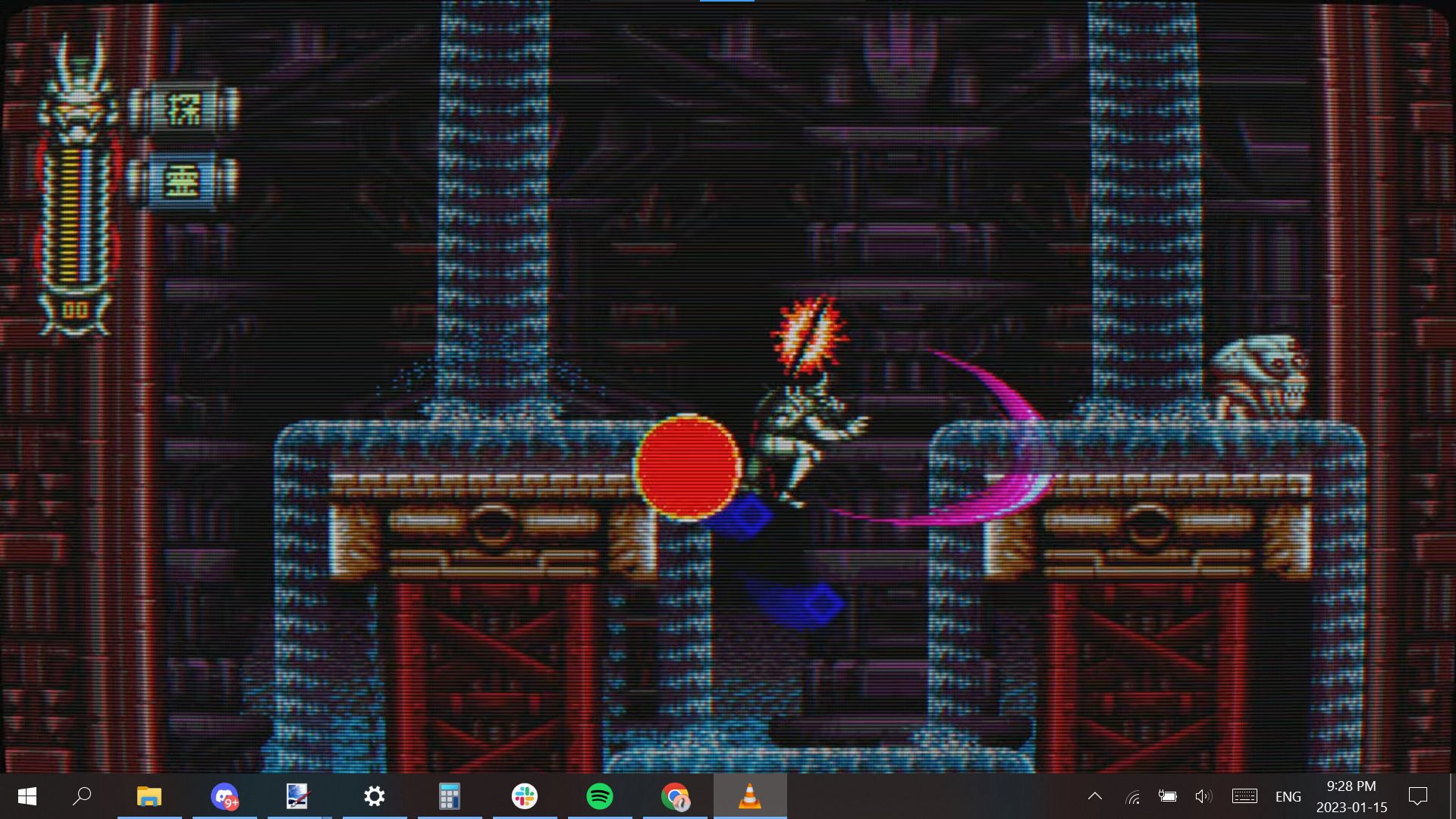 You will start the stage running down a corridor to the right and enter a giant room that is filled with platforms and a bunch of Spider-Legged Cyborgs crawling all over them. However, you don't need to kill everything here, you just need to get to the bottom right corner. When you need to take out the Spider-Legged Cyborgs with a Dash Attack. 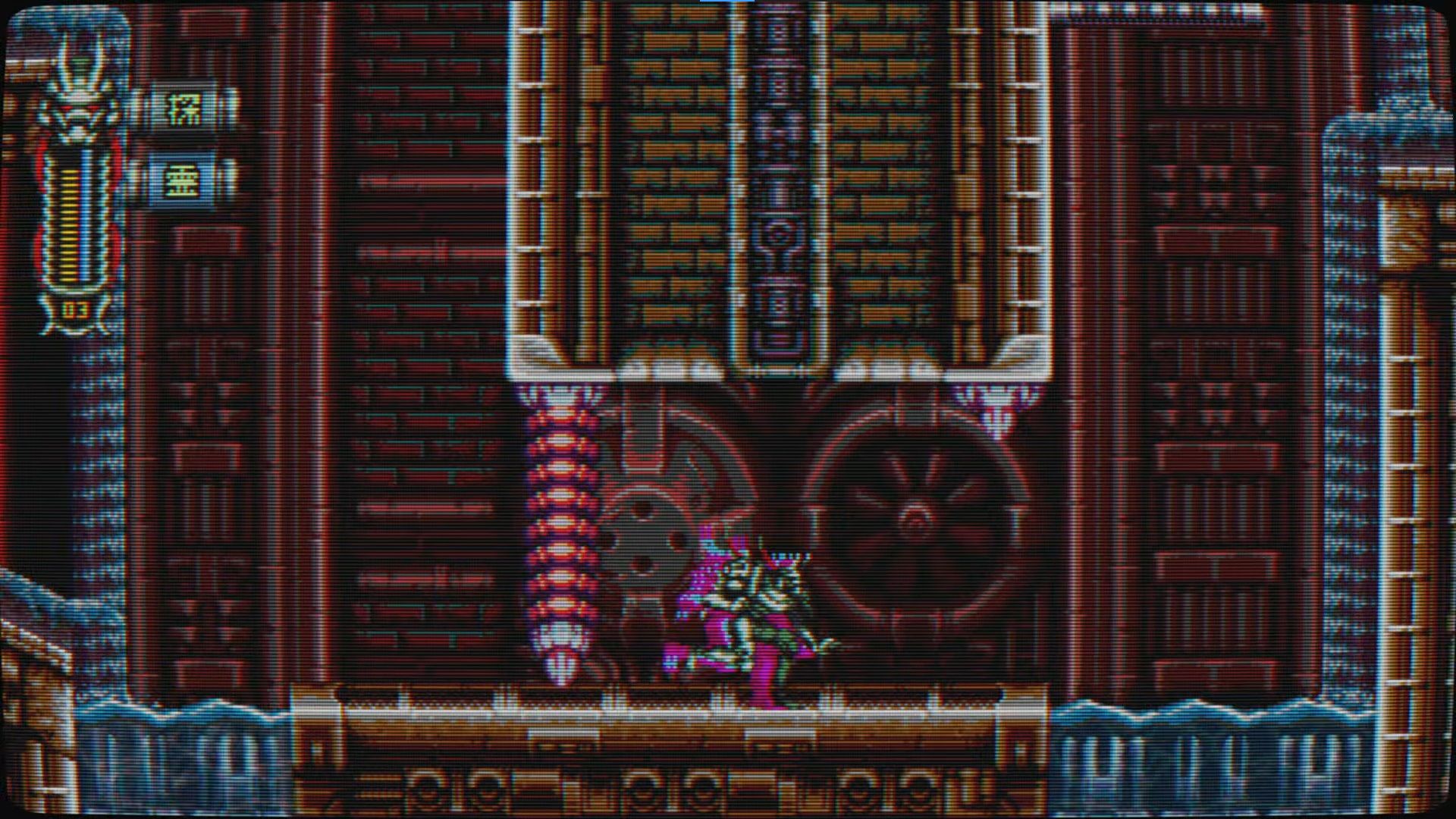 Once you get to the bottom-right corner, watch out for the worms positioned at the corners, once you cross under them, they will descend and attack. However, you can run right past them as long as you don't stop (though prepare to jump as you pass under the second worm, as you are going to have to dash between the walls in the section that follows). 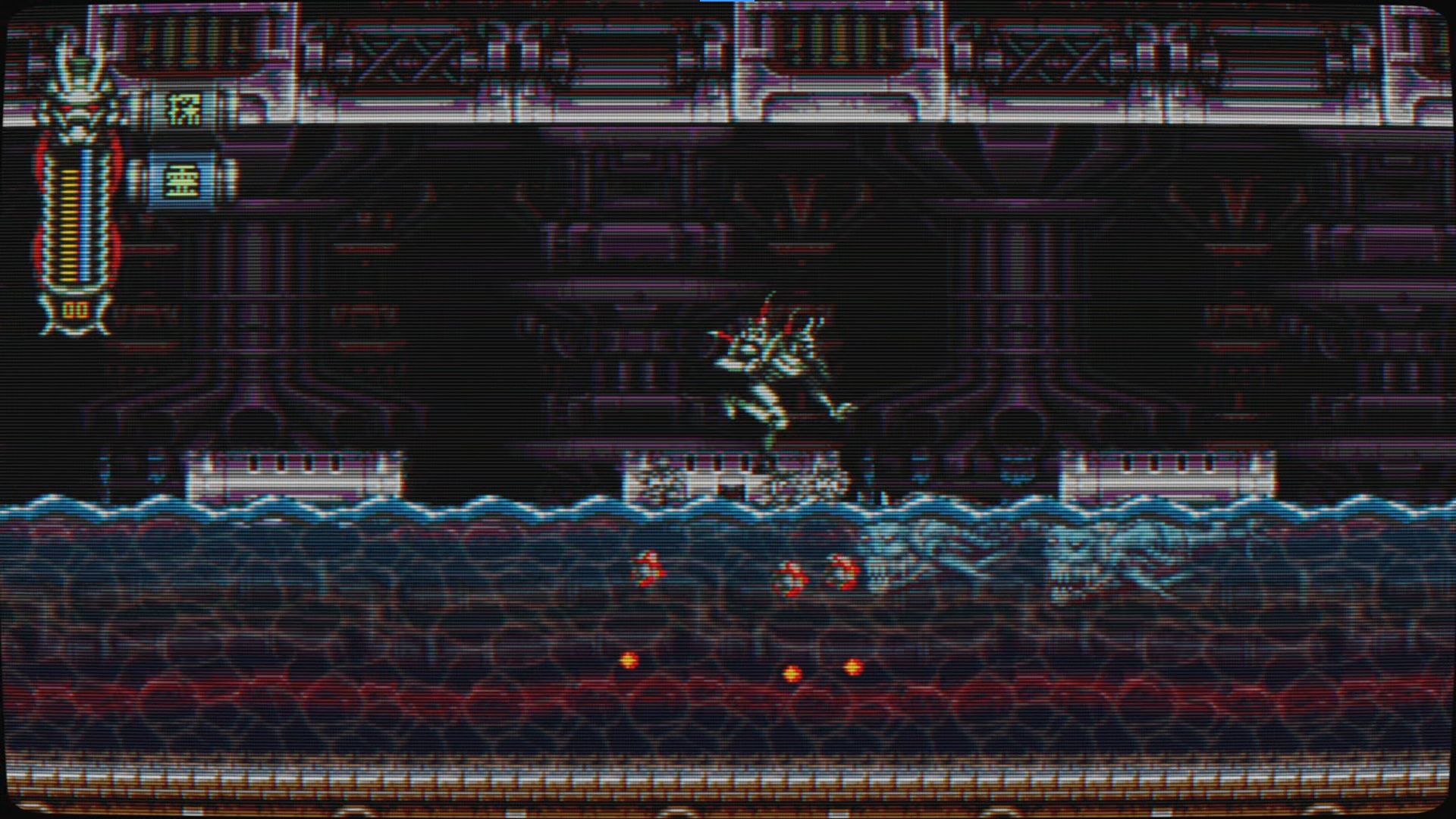 After you hop up the shaft, you will encounter an area with a reservoir or water and platforms floating on top. You can run through the water, but that is the slower path. You would be better off sprinting across the platforms. There are more of those Worms looking to snag you, but if you keep sprinting they will all miss you. 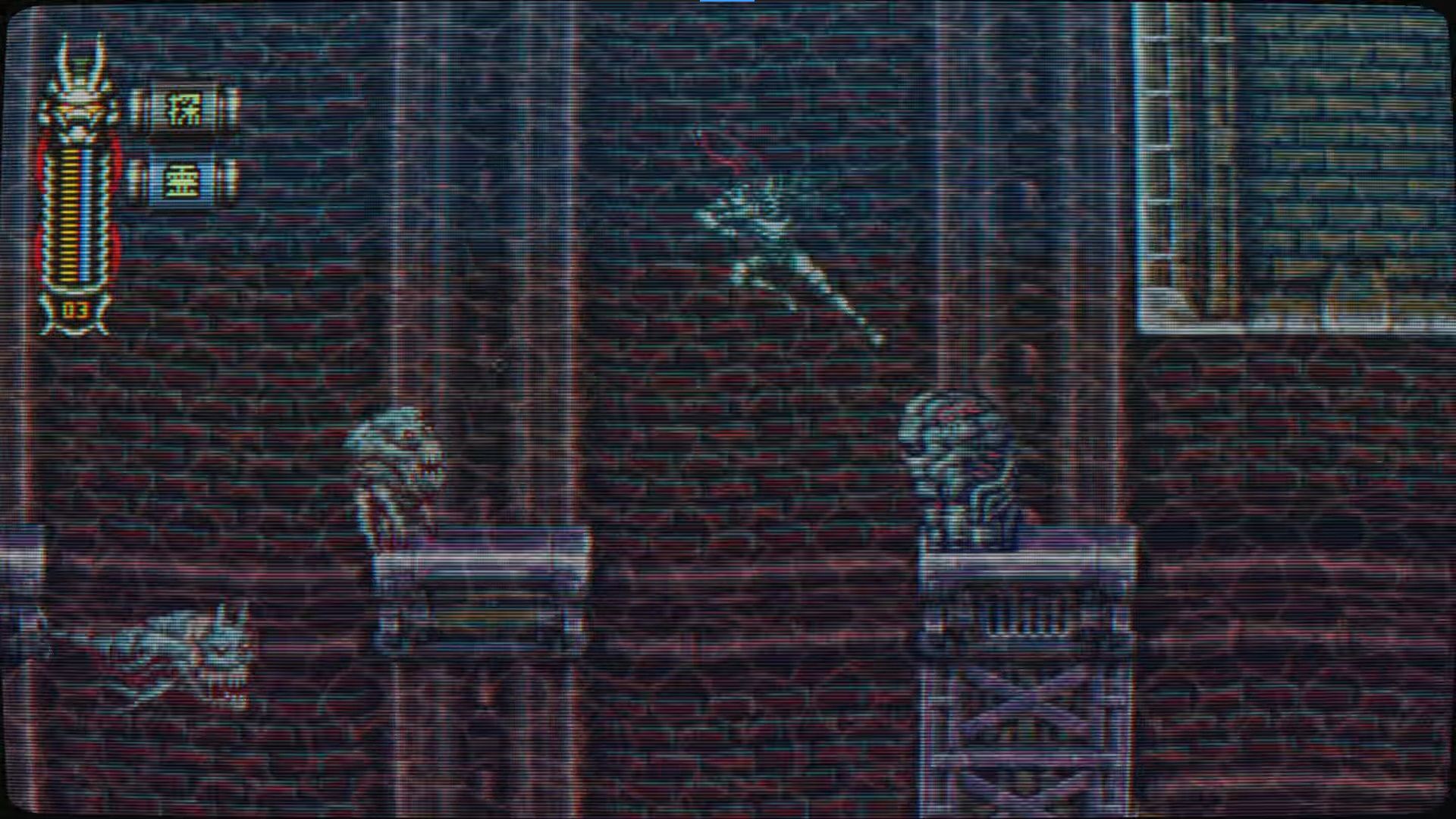 You will now jump down and be in a large tank with fish and a turret. This turret will fire a ball of energy that moves up and down in a weaving pattern. It is pretty fast-moving, and you will be moving pretty slowly (as you are underwater). You are better off just jumping up to the platform above and avoiding it. There is another Turret waiting up here for you. Dive Kick it a few times, and it will die. There is an extra life if you travel up the shaft above you on your left (as well as HP and MP recharging power-ups), but the main path is to your right. 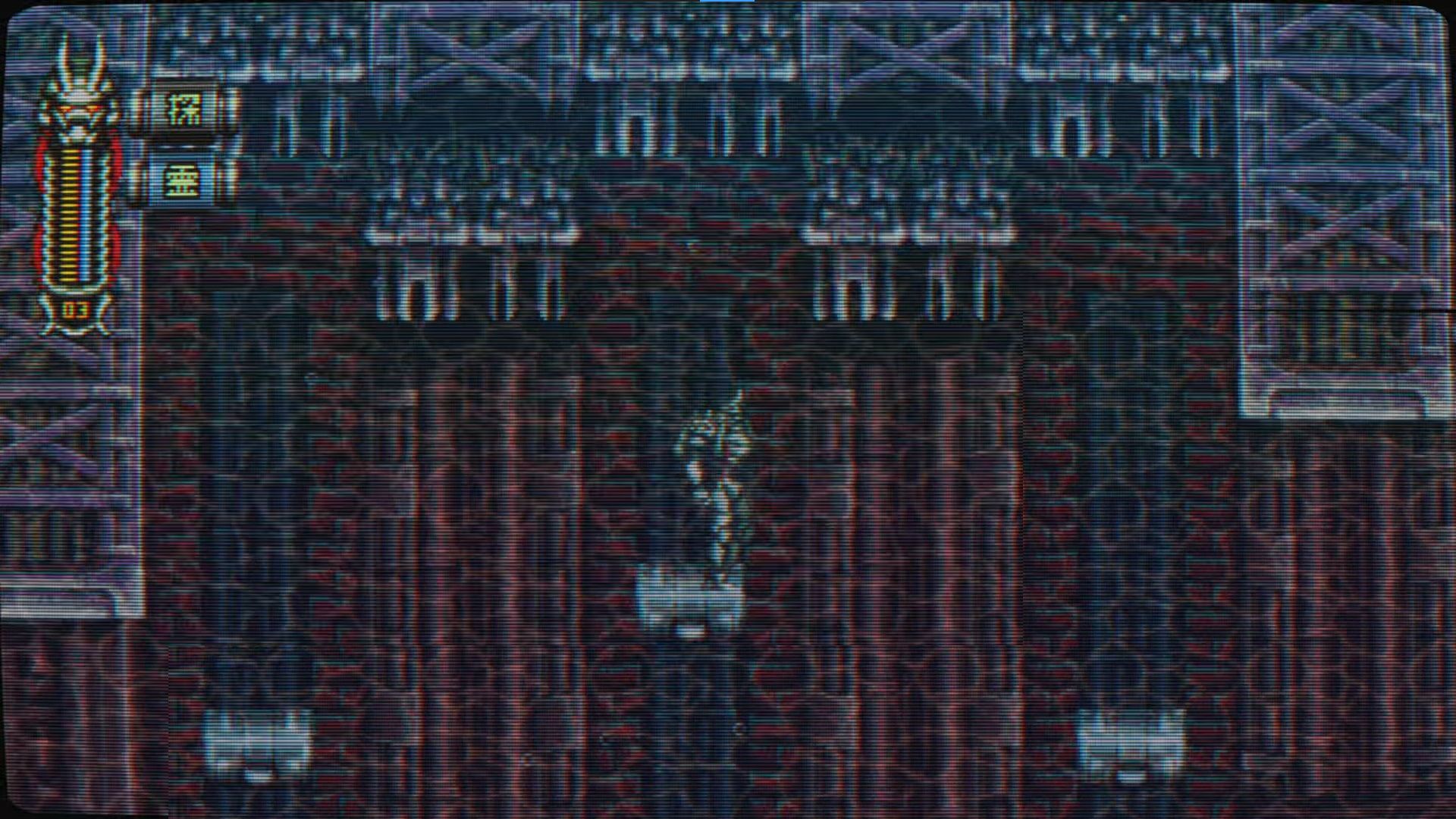 You will now be in a room with three platforms moving up and down. You can jump to the center platform, but due to the spikes on the ceiling, jumping to the platform on the right is nearly impossible. So, instead of jumping across, time it so that you can run off the middle platform and land on the rightmost platform. Now head to the right, but be mindful of the worm on your right, it is positioned on the ground this time and ready to pop up and hit you. 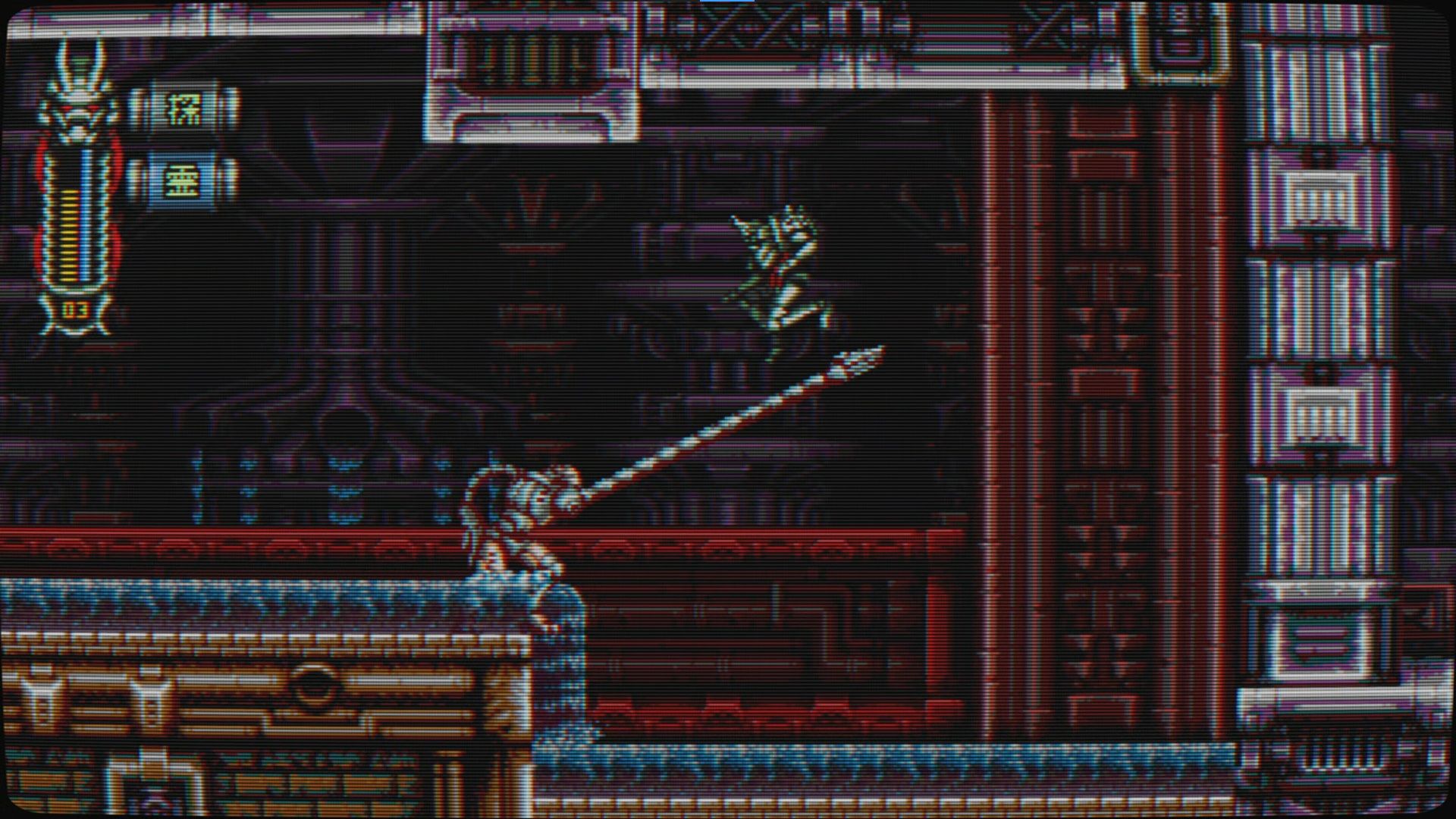 After you hop up the shaft on your right, you will be sealed in a room and forced to face off against two cybernetic abominations with extending arms. You can crouch near these creatures, and they will extend their arm over your head, leaving them open to your low attacks. If they start spinning, get ready to jump over them. This is one of the few enemies you don't want to Dive Kick as they are remarkably efficient at batting you out of the air. Once you kill them, head to the right and prepare to confront the boss. 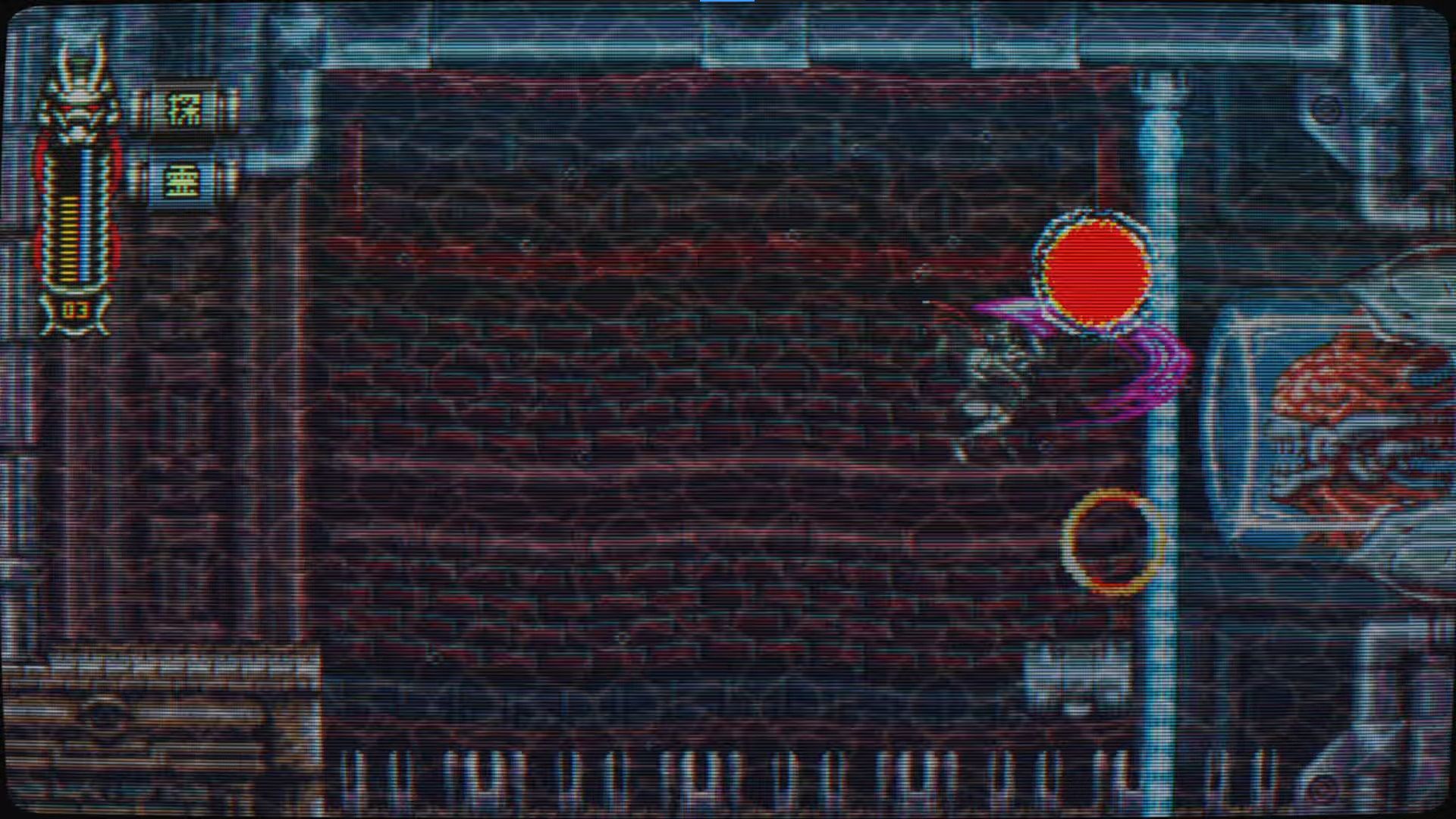 At first glance, this boss is an absolute nightmare. The ground is lined with spikes, they send out these slow-moving projectiles that can be hard to avoid, and they have a giant laser that will sweep back and forth across the stage. If you have a Special Weapon, like the Stormshot, you will be able to hit it from across the screen, but you will run out of MP before you are able to kill it this way. 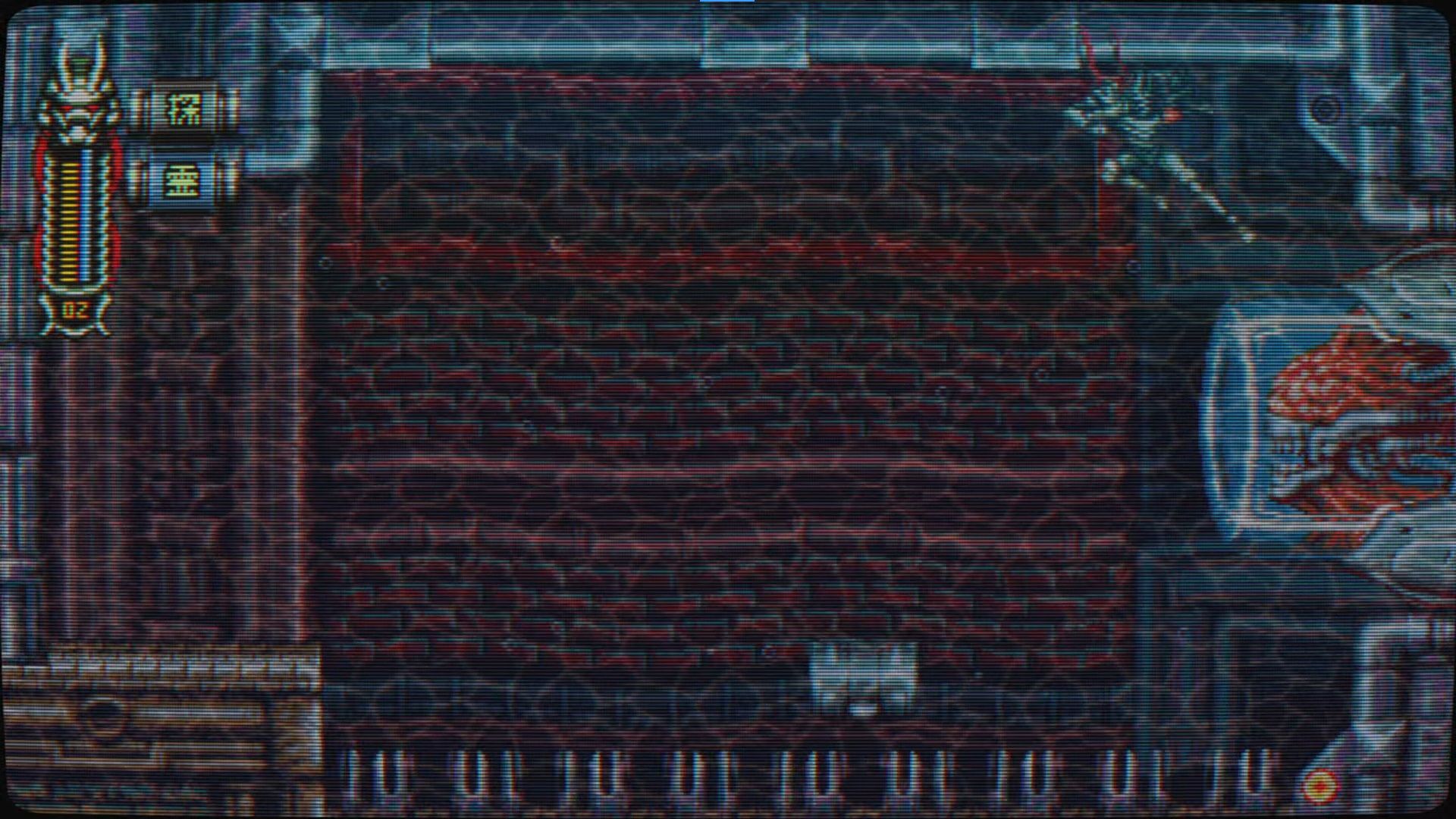 Thankfully, there is a highly effective trick for frying this fish. You can wedge yourself in the top right corner mid-Dive Kick. This will allow you to hammer out many Dive Kicks in quick succession, as you will be braced up against the ceiling. Whenever the boss tries to fire one of their projectiles at you, just swipe it out of the air (you will be right beside the place where the boss fires them out of).

The laser will become difficult to avoid if you use this method. So, if your life is extremely low, keep an eye on that laser, and if it turns blue, retreat to the other side of the screen. Otherwise, just take the hit and keep Dive Kicking. 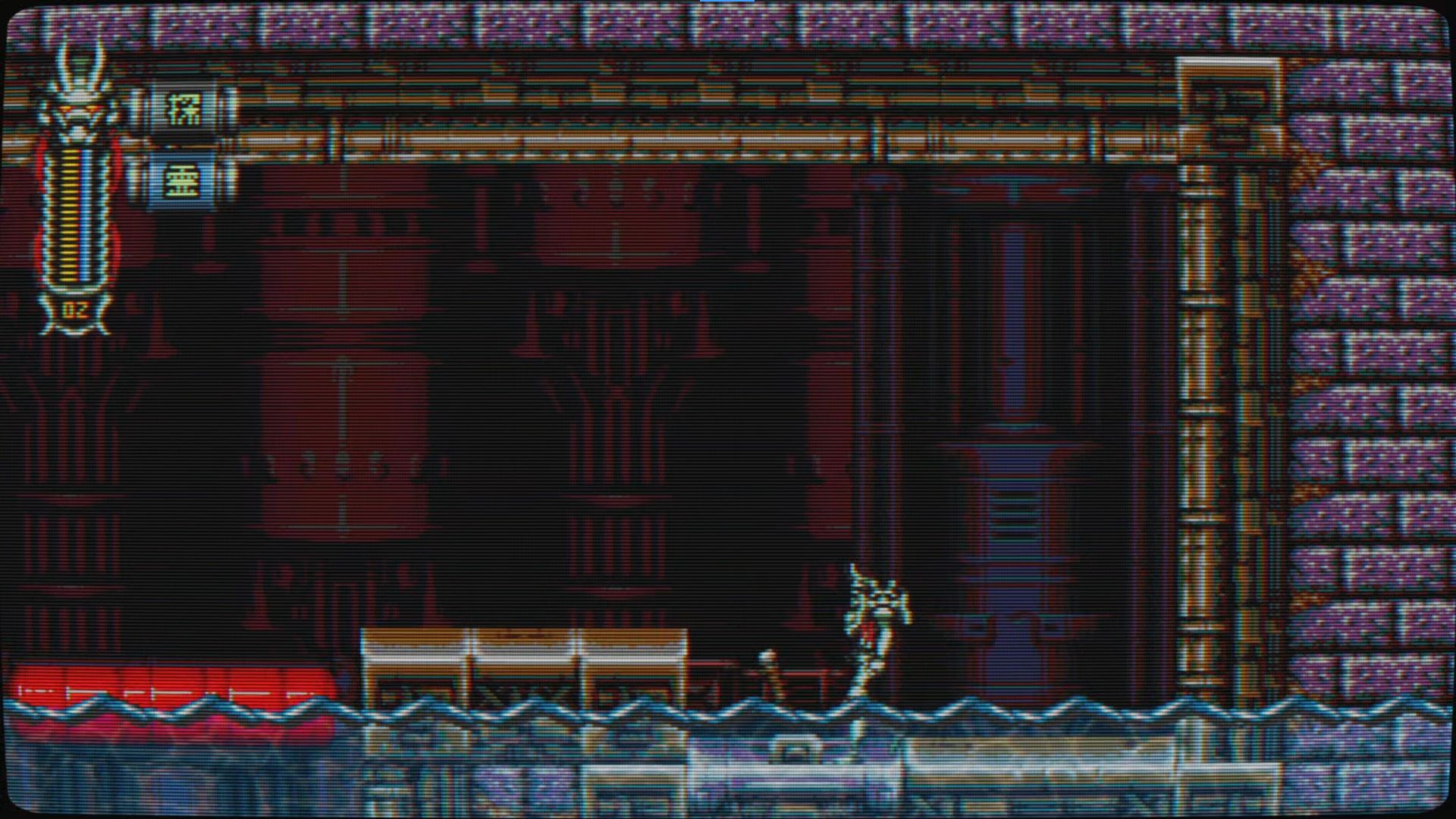 Run to your right, take out one of those Spider-Legged Robots with a Dashing Attack, then continue to the right and flip the switch. The water level will lower. As you'll see, raising and lowering the water level with these switches is the core mechanic of this stage. 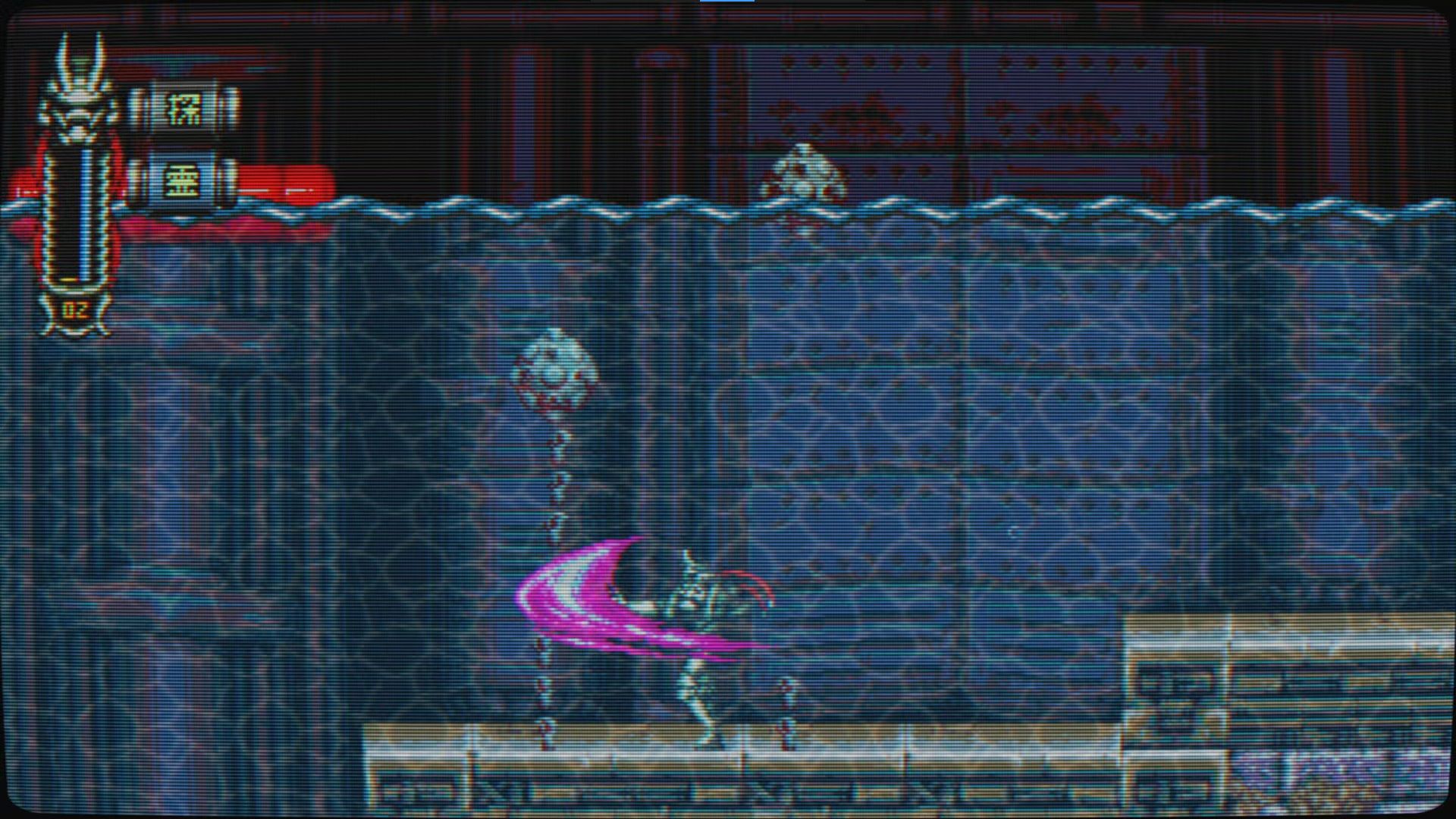 In the next section, you will encounter a bunch of mines just lying on the ground. Don't attack them: avoid them. Now, head to the right, you will flip a switch that will raise the water again. Now, on your way back, cut the chains holding the mines, and the mines will float to the surface and explode far enough away from you that you should be safe. Jump down the shaft on the left side of this section. 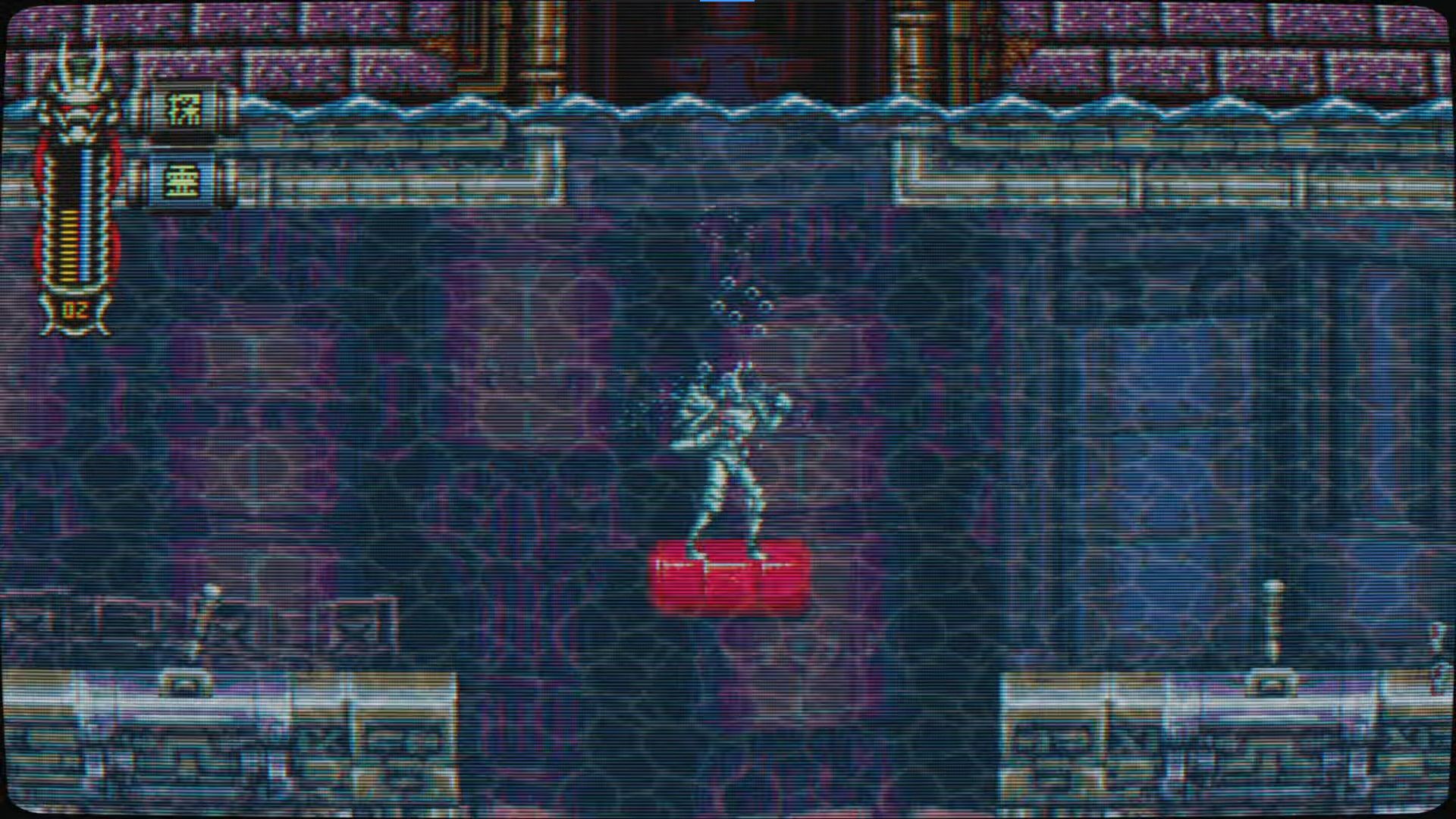 On the next level, hit the switch to lower the water level, a barrel lower alongside it. Hit the next switch and then jump on the barrel. You will now ride it upward like an elevator. Head left once you get to the level above, and perform hops across the gaps (just tap the jump button). Hit the switch on the left, and ride the red float down. 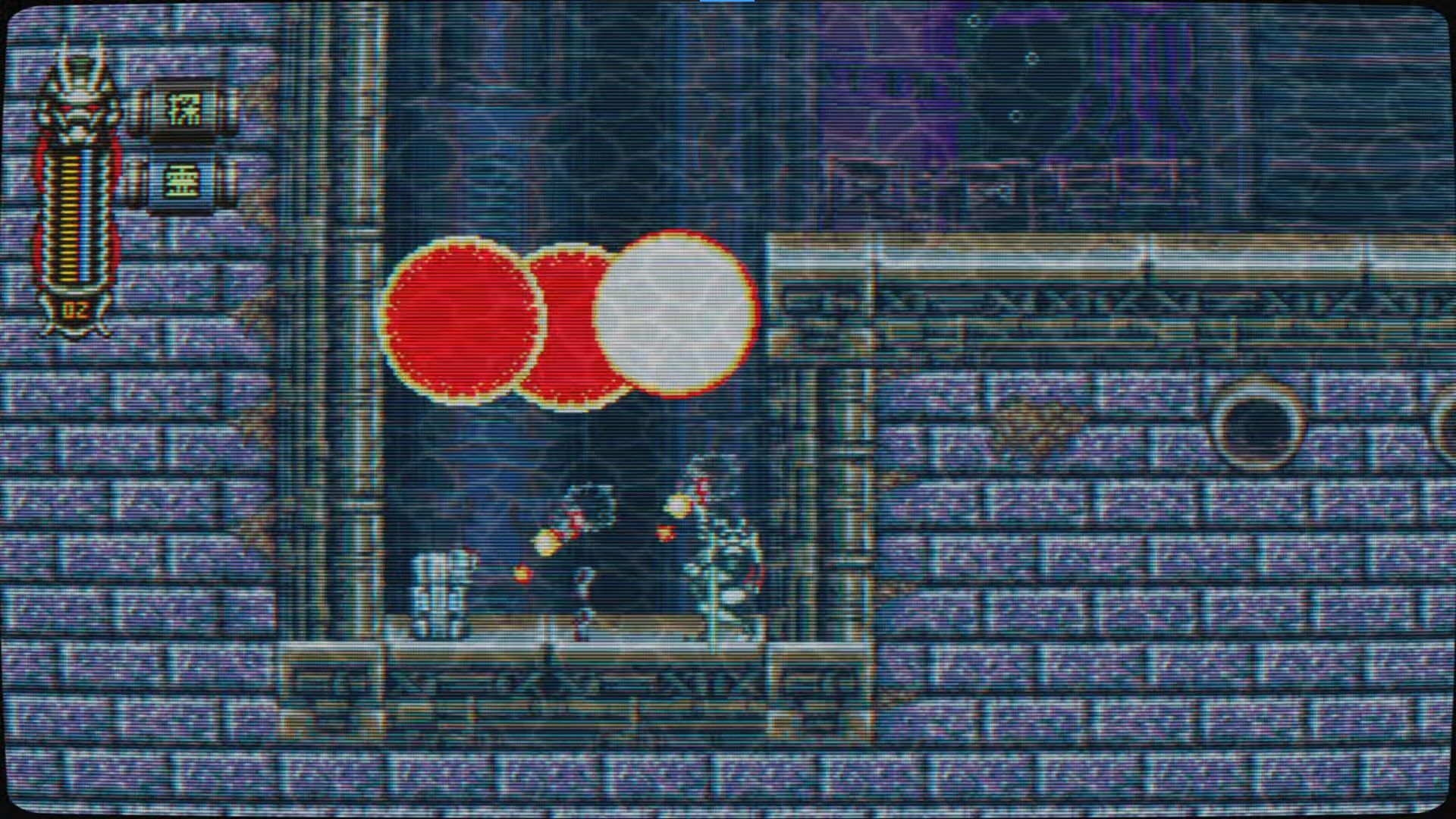 Now, travel to the right, and you will drop down into another submerged area. There are HP and MP regenerating items in the left corner (just cut the chain of the mine and duck to clear it out). Now, you will need to work your way through to the right side of this level. You will have to fight a bunch of familiar robots on your way there. Once you get to the right, you will face off against a mid-boss. 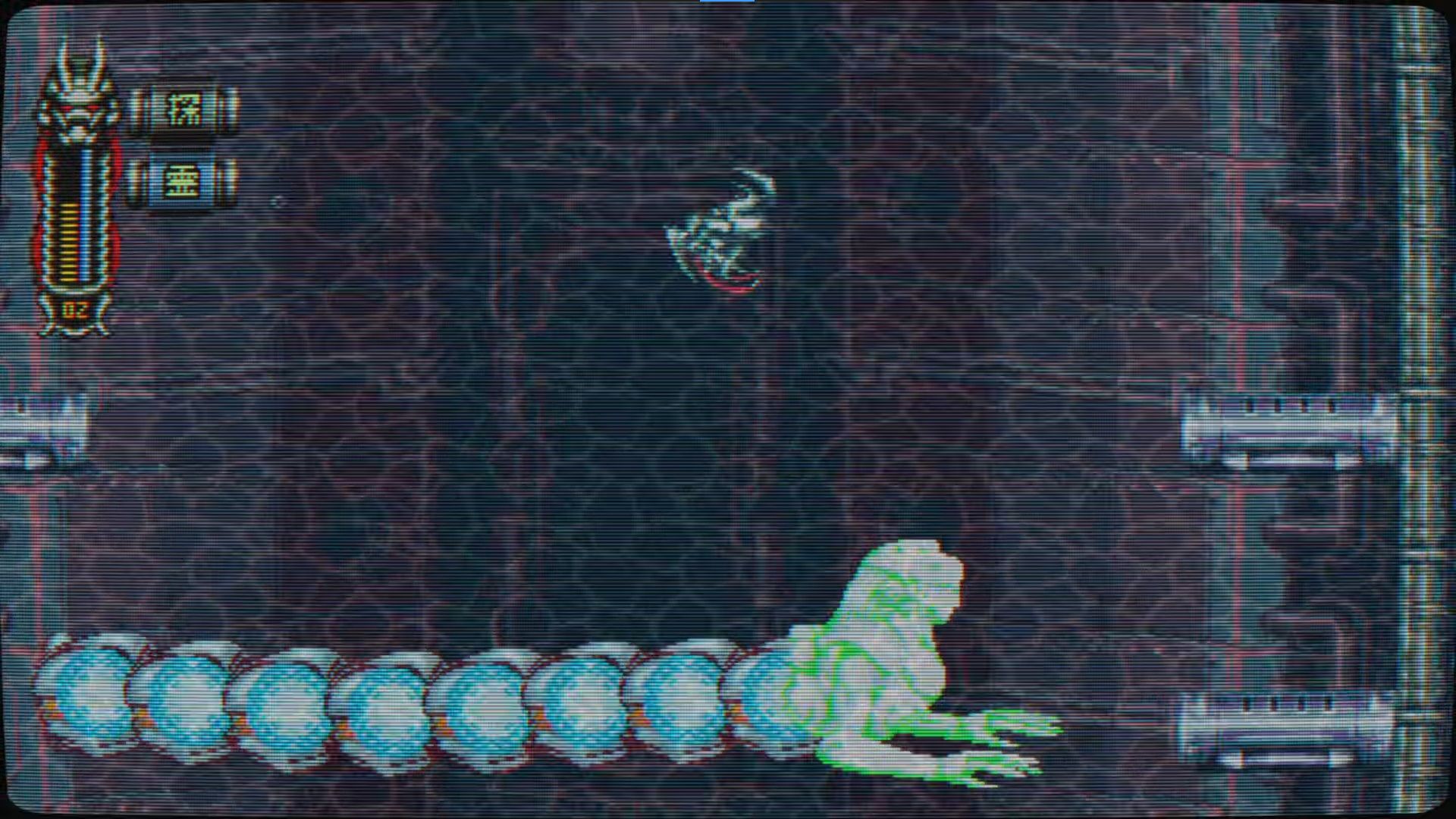 This boss is a giant water serpent. She can fire projectiles from her back. She also has a swiping attack with her claws. Lastly, she has the ability to electrify her entire body. Her arena has four platforms, two on each side of the screen. However, you should be spending most of your time on her back or hovering above her. 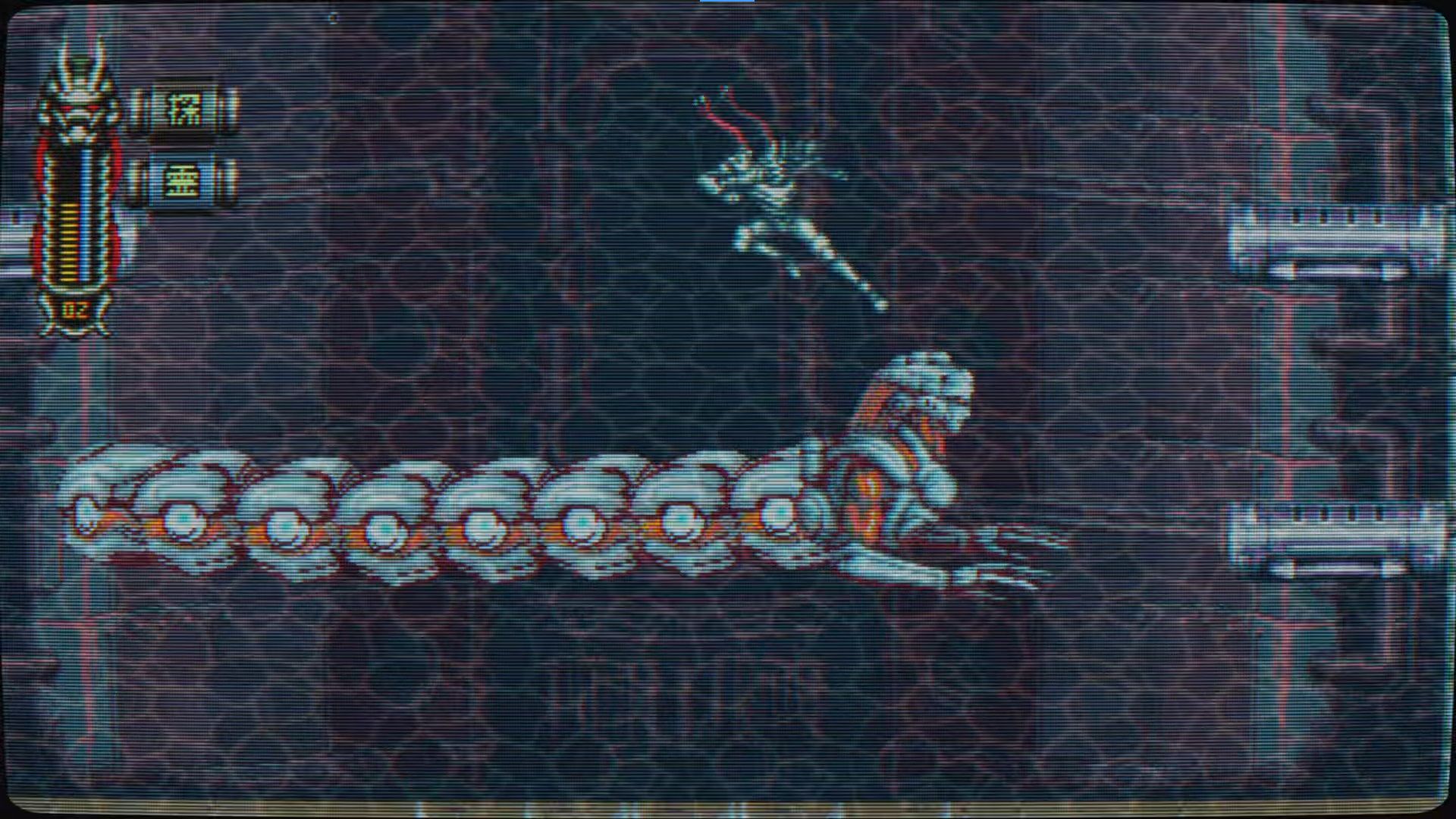 There are two ways to take care of her quickly. You can stand on her back and kick her in the back of the head. She will occasionally shake you off with a fireball, or by electrifying her body, but this is the fastest way to take her out. The other method is to just deliver endless Dive Kicks to her head. It isn't quite as fast, but she has no real answer to this approach, so if you are low on life, it is a good way to take her out. 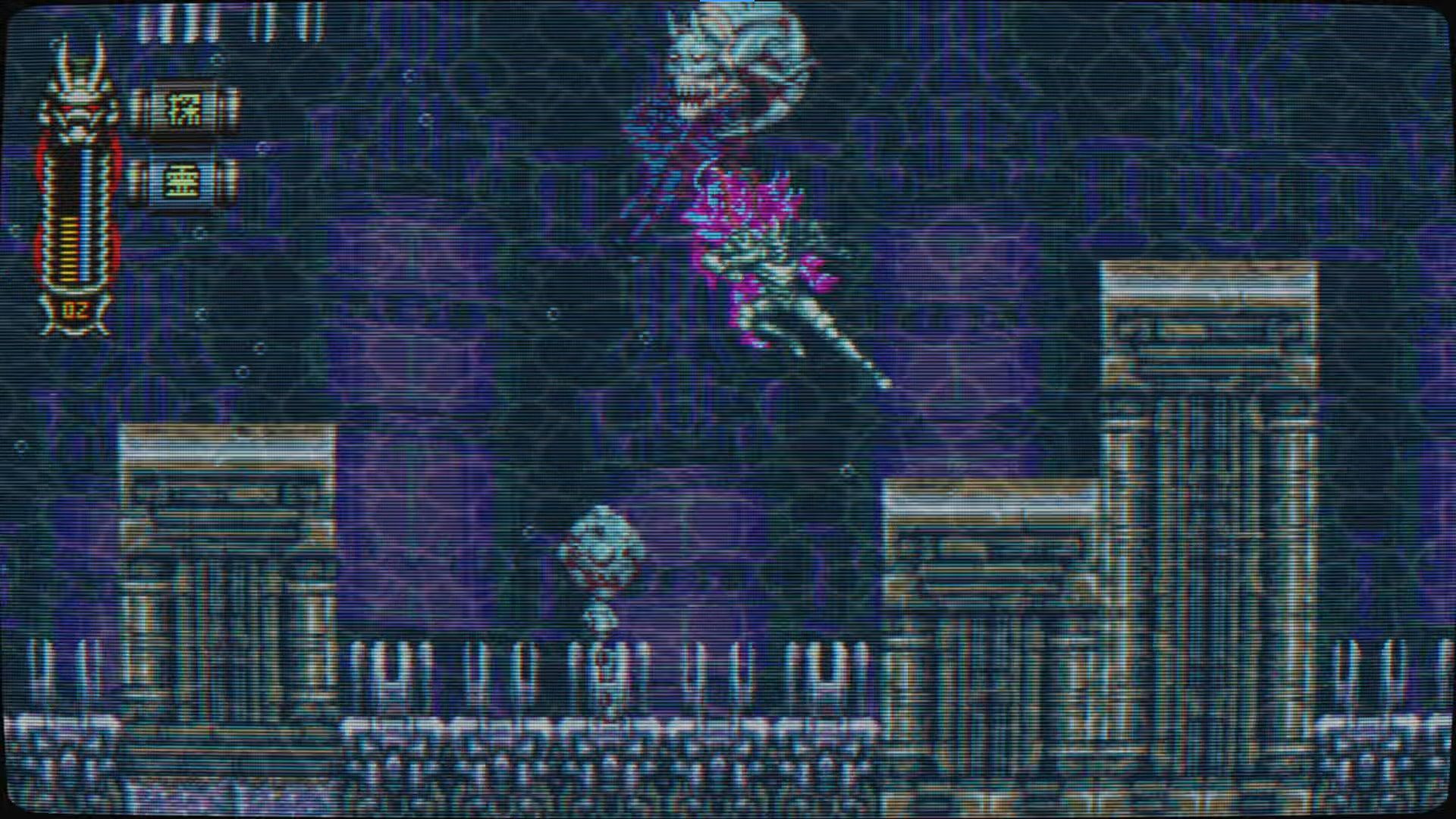 After you beat the mid-boss. Travel to the left side of the screen, destroy the canisters to recover your health, and then drop down the shaft. You will see a mine, cut the chain, and it will create a hole in the ceiling. Hop up here and claim your first Upgrade chip. Now, head back to the right. You will need to take out one of those turrets, then you will need to hop over some pits with spikes all around you. You can bounce off of the mines (or the fish) in order to make these jumps. 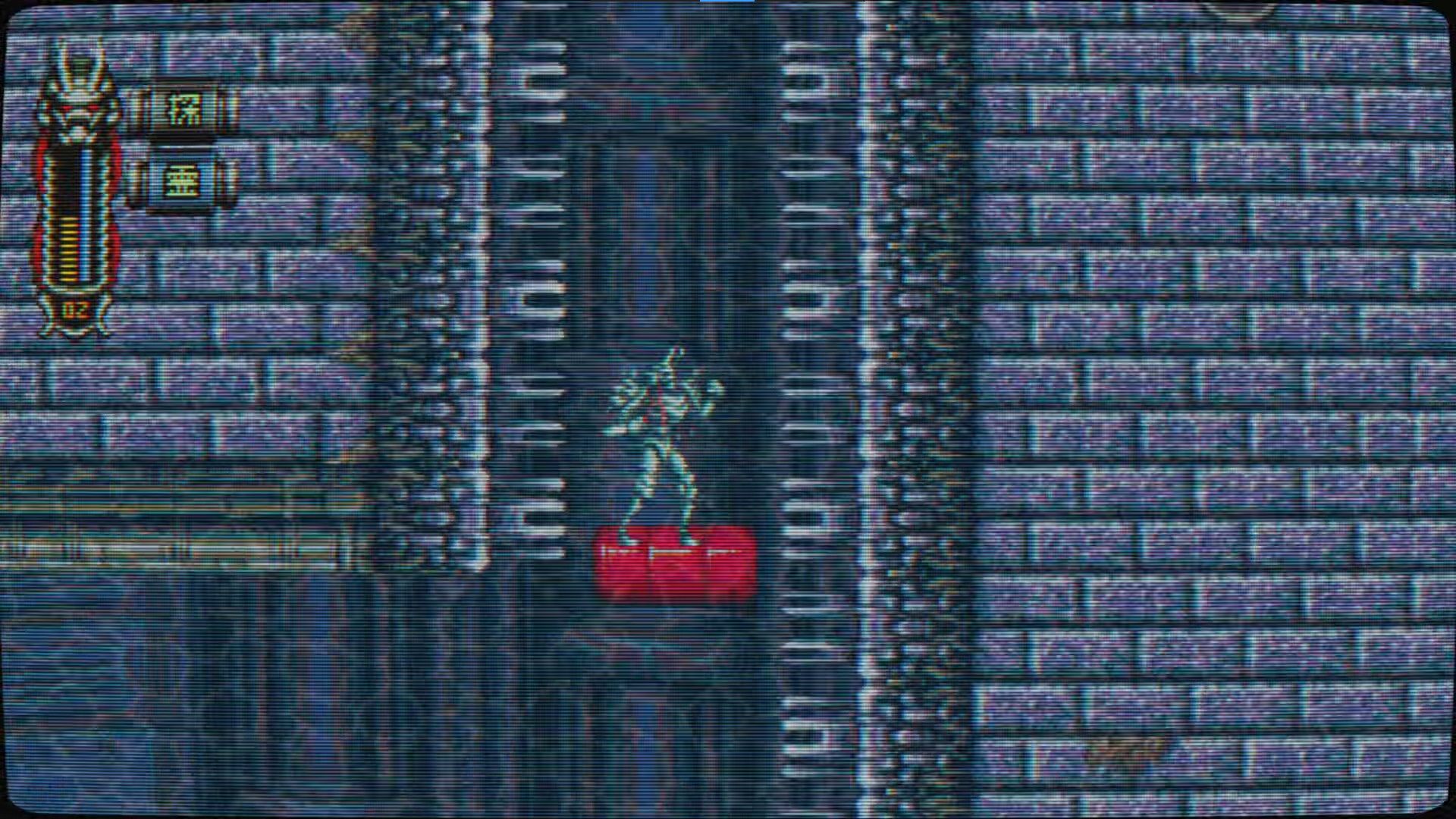 At the end of this section, flip the switch, lower the water level, and then after a barrel descends, hit the next switch, jump on the barrel, and ride it to the next section. The next Upgrade Chip is in this next section, it is just above the first mine you encounter, but you are going to need to come back for it a little later. For now, push forward, hit the switch, and jump down to the area below. 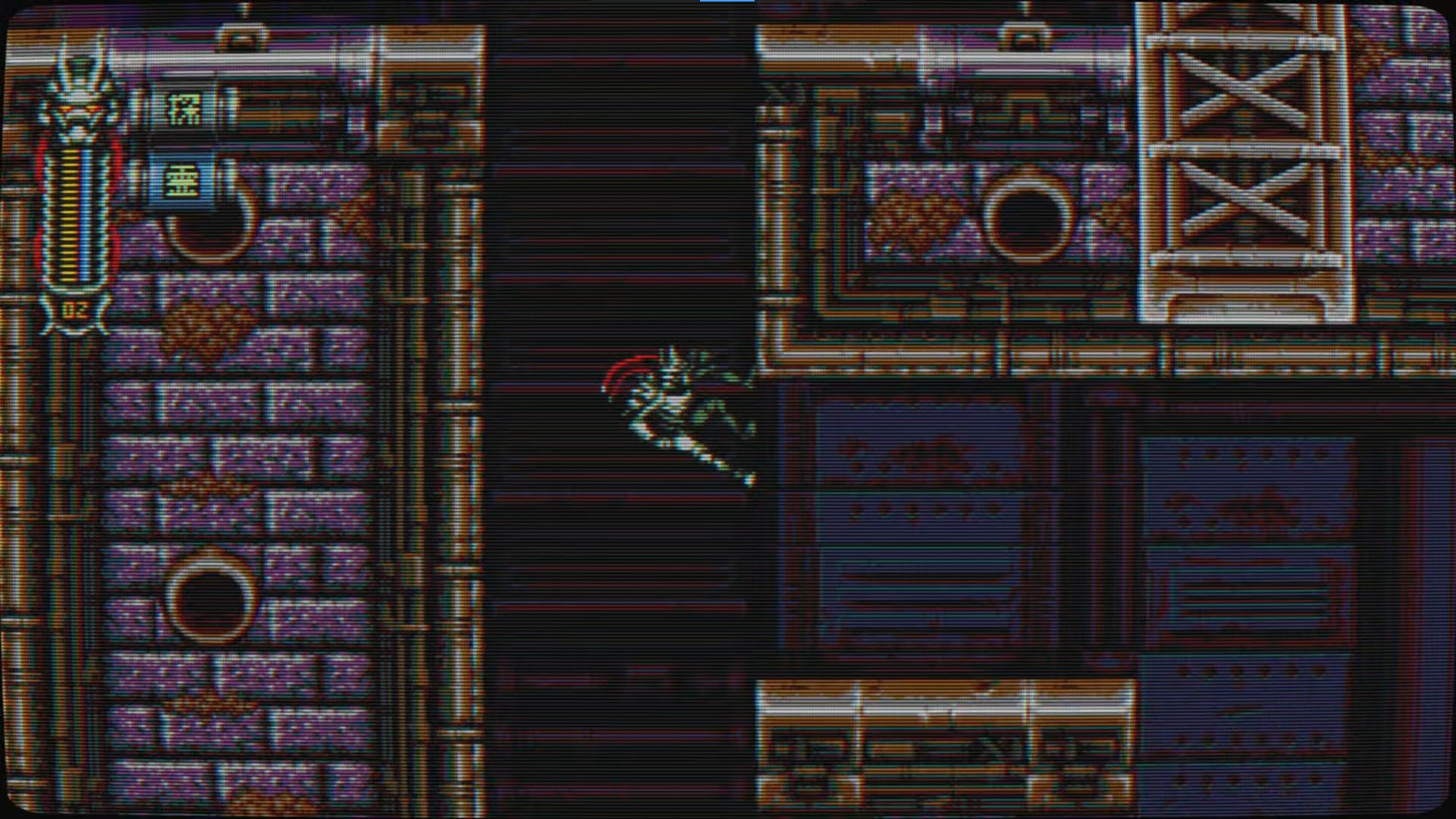 You will now take out a few more enemies (a turret and some Spider-Legged Robots). Now, travel up the shaft, and flip both switches. Head to the left, and you will drop down into the area you were just in a little earlier. Keep heading to the left, and you will be back at that mine we told you was under the upgrade chip. Cut the chain, then jump up and through the hole you just created, and claim the second Upgrade Chip.

After you collect the chip, head back to the two switches, flip one of them and lower the water level. Now, hop down and continue to the right. Hit the switch on the right and ride the float up to the surface. The next room you enter will be the boss' arena. If you are injured there are HP and MP recovery items just left of the arena. 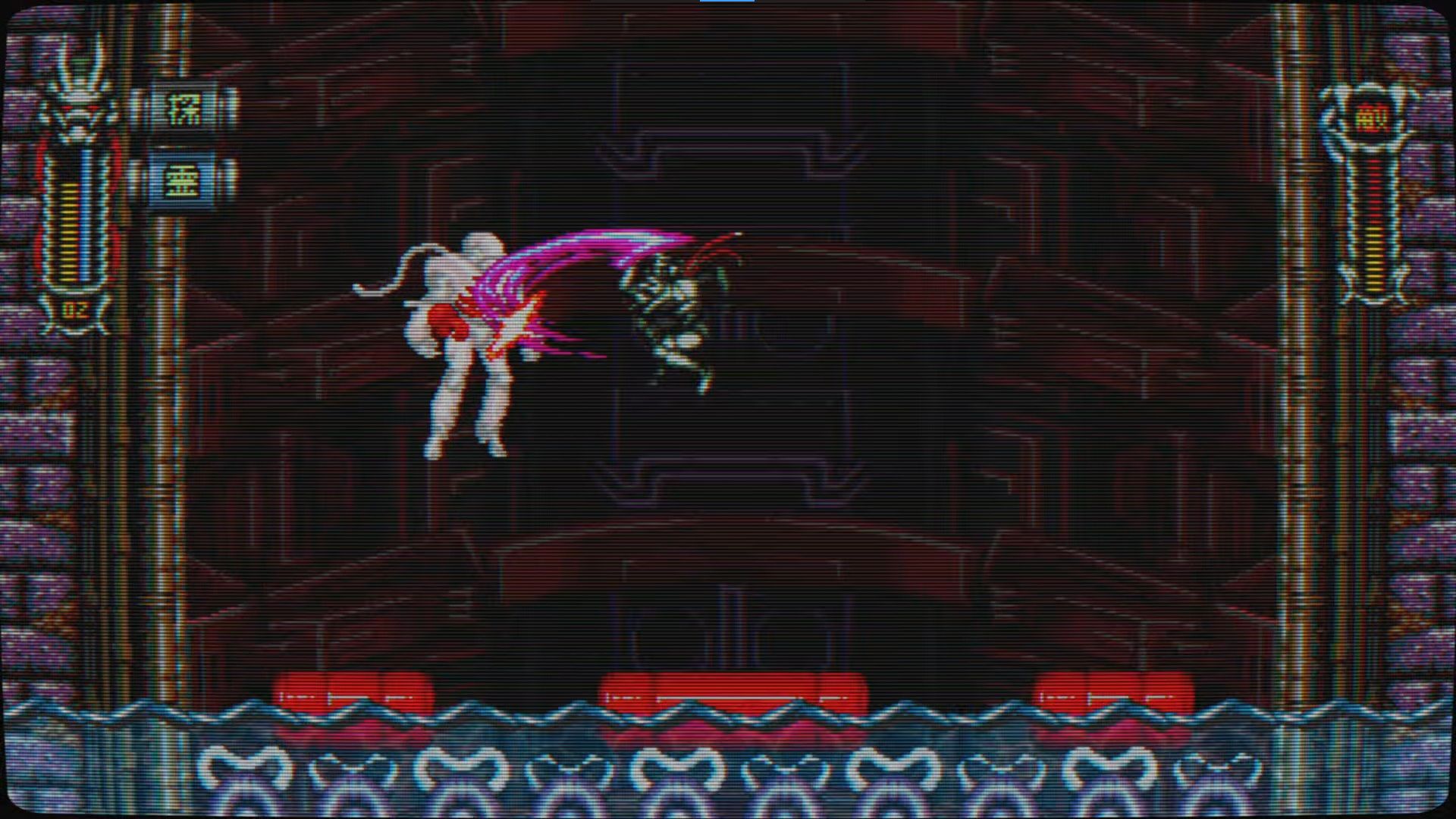 The Hydromancer has a few tricky attacks. He will be doing quite a bit of teleporting. Sometimes he will teleport beside you and backhand you. Other times, he will teleport above you, and summon four shuriken that will circle him before firing them in your direction. However, he will spend a lot of time hovering above you, this is the perfect opportunity to jump up and slash Hydromancer. If he teleports beside you, just jump up and Dive Kick him. 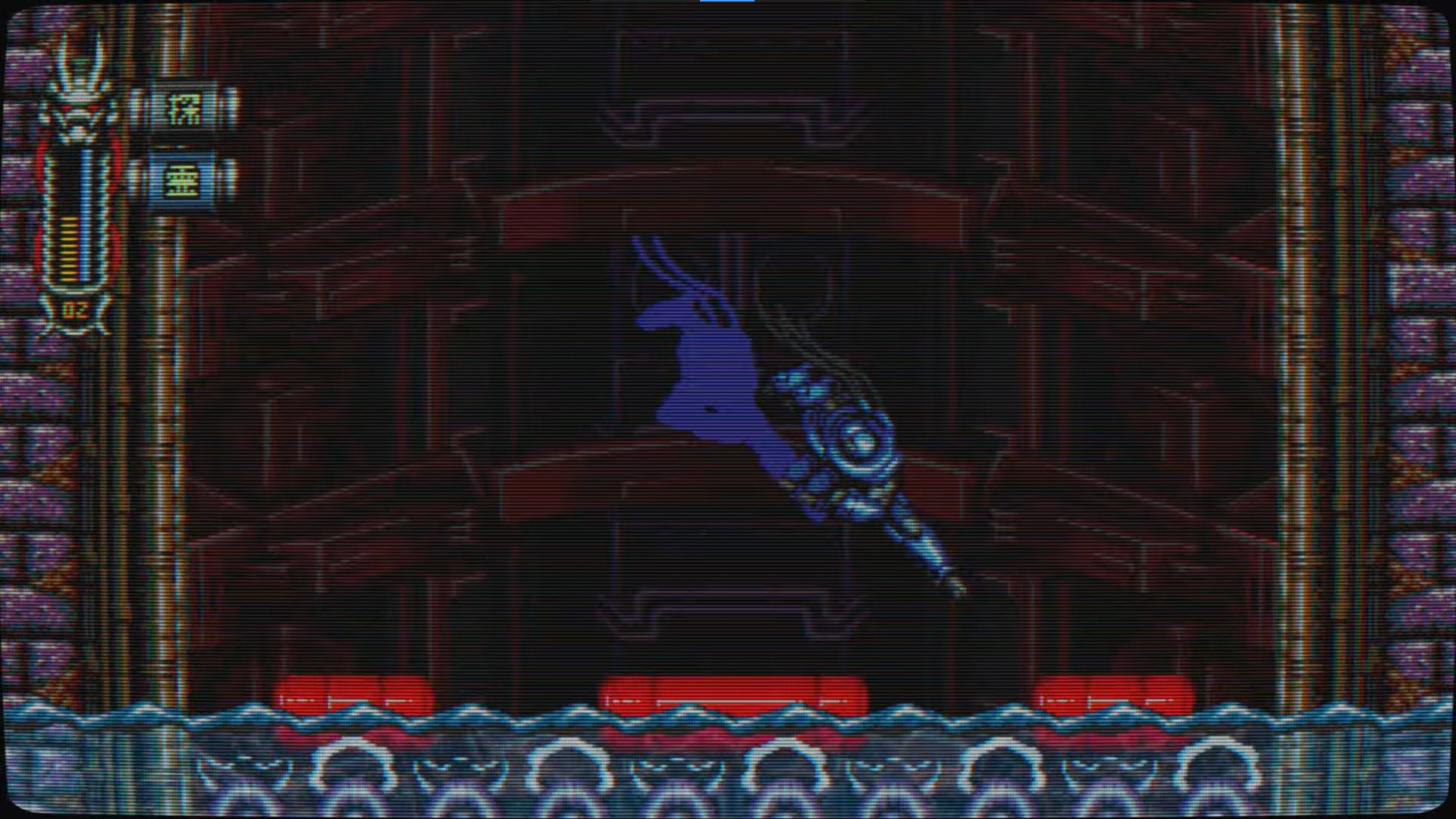 In his second form, Hydromancer will start to implement an attack where he teleports around the screen and performs flying attacks. He is completely invincible during these attacks, so you need to jump over him and avoid him until it concludes. Continue to follow the pattern from the first half of this battle, and you will take him out in short order.

If you have the Photondash Special Weapon, it does tremendous damage to Hydromancer. So, you can use that to completely trivialize this encounter.