The Fallen City in Vengeful Guardian: Moonrider is unlike any other stage in the game. Throughout every section of this level, there will something doggedly pursuing you. Whether you are being chased by a vindictive robot, or a wildfire consuming everything around you, the emphasis here is quick decision-making and fast reactions.

However, just because you are being pursued throughout doesn't mean that there aren't secrets to obtain along the way. In fact, the break-neck pace makes for some particularly easy-to-miss power-ups. On top of that, you will have be contending with three boss encounters. Naturally, we will cover everything you need to know in this guide. 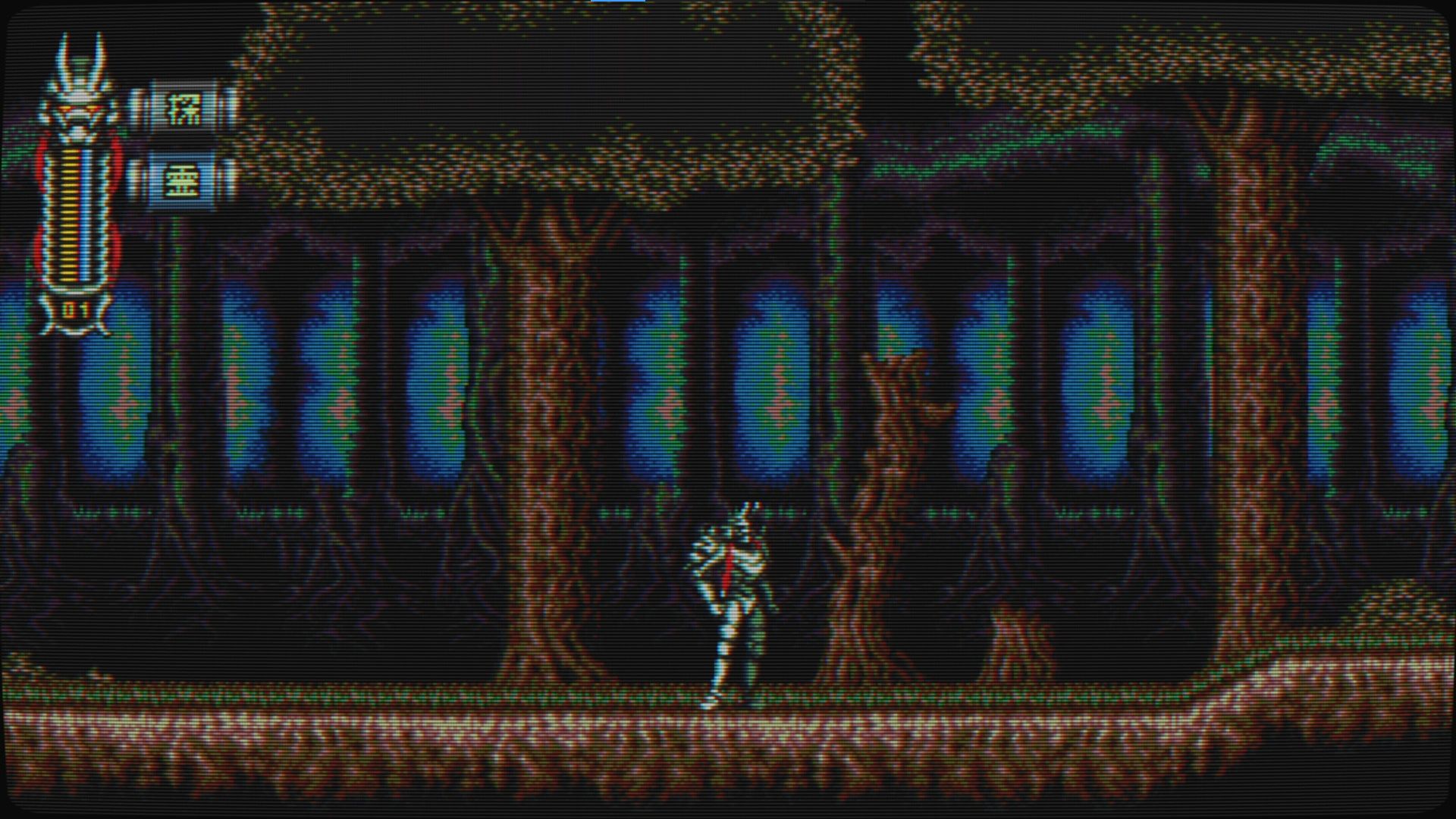 As we alluded to in the introduction, you will be pursued throughout this stage. In the outskirts section this will take the form of a giant robot taking aim at you from the distance. So, when a reticle pops up on the screen, it would be a good idea to avoid it. 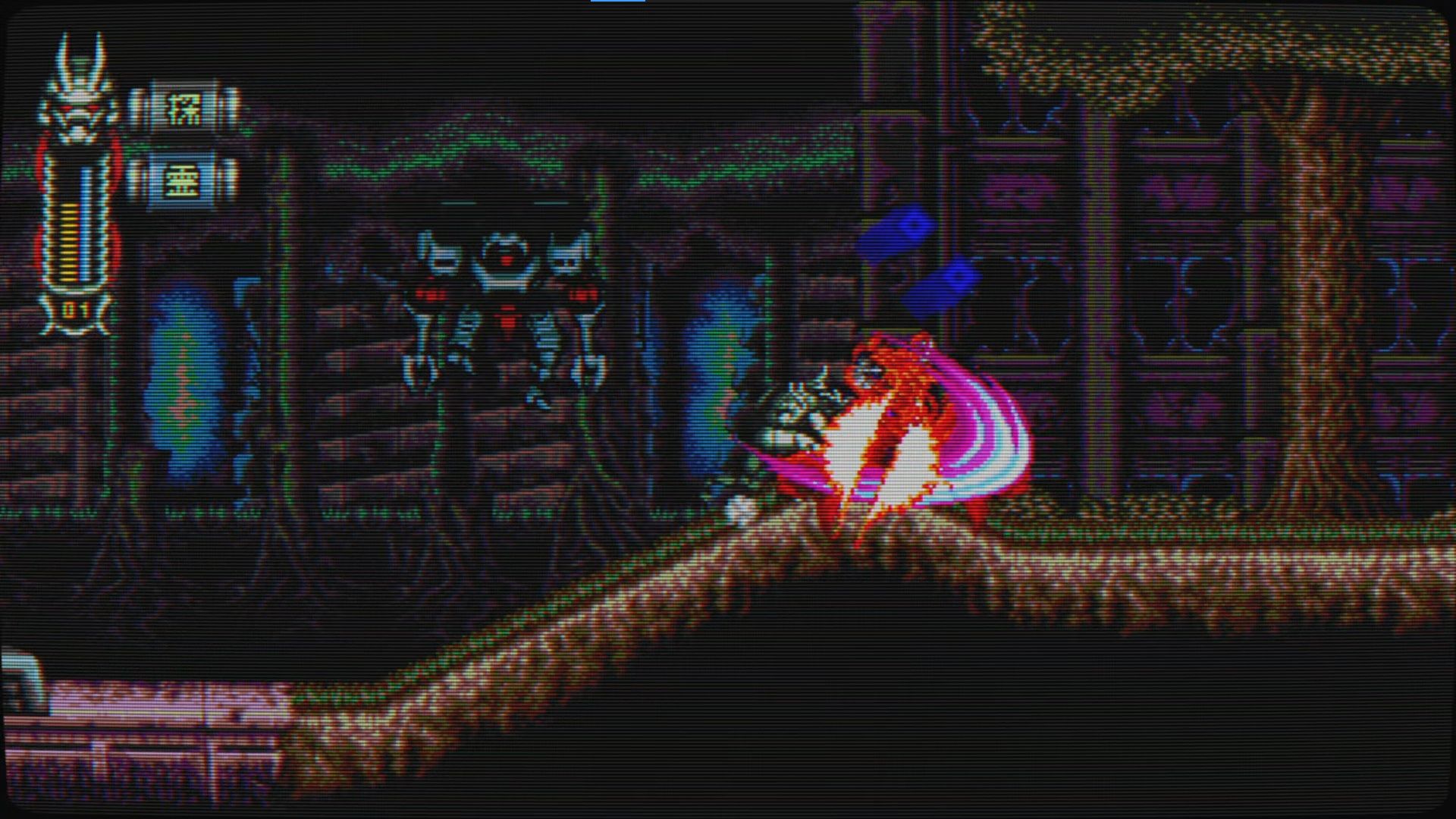 During this first section, you will be encountering Snipers and Mortar Troopers exclusively. Generally speaking, you should be rushing forward whenever possible. So, the Snipers likely won't have a chance to take a shot. You will have to deal with a little mortar fire, which will rain down from the sky in a spread shot formation. Just try to weave between the bullets the best you can while sprinting. You will likely run past them before they can ever each the ground. Momentum is key, here. 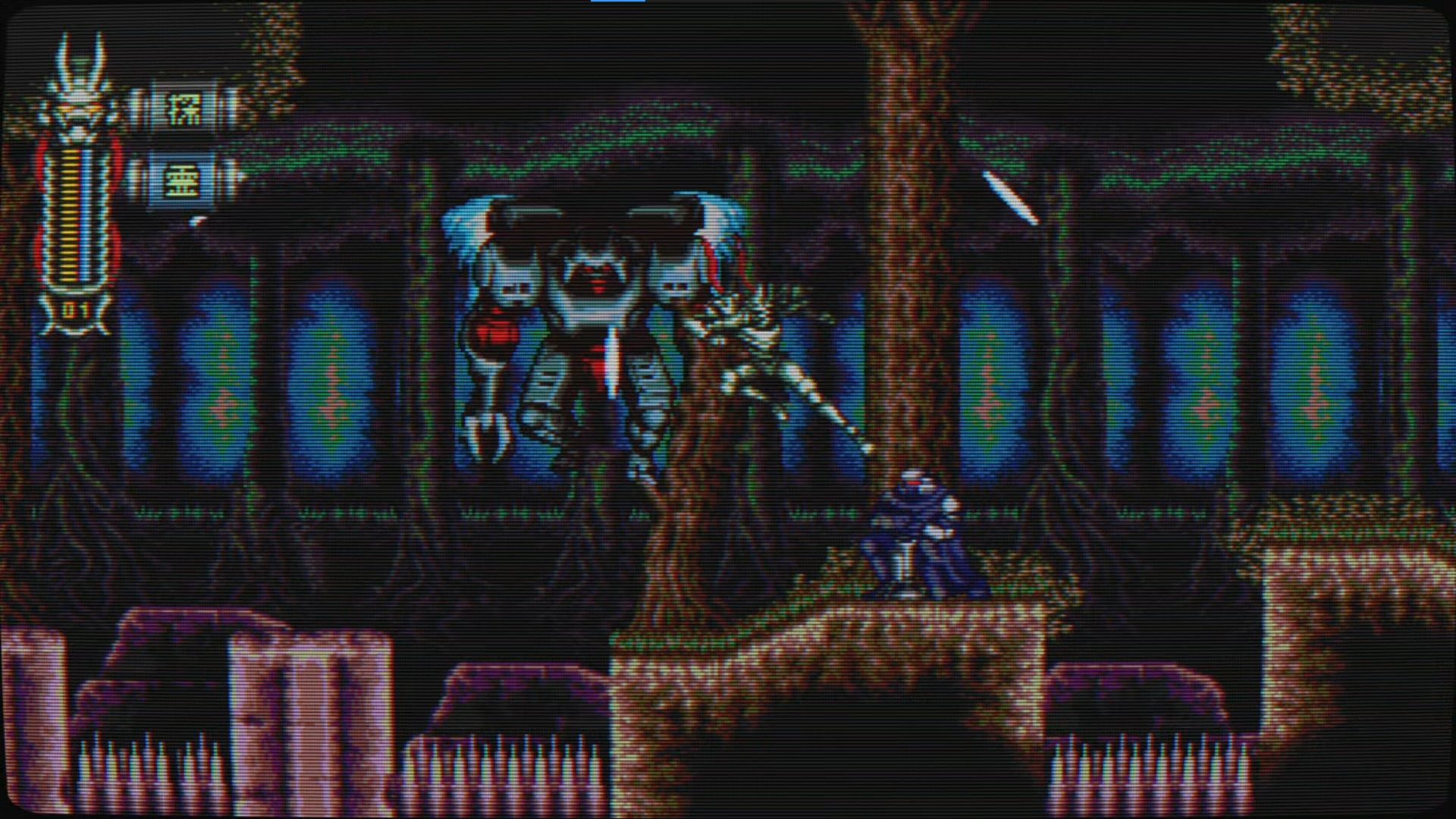 All the troops you encounter in this stage will go down from a single Dashing Attack or Dive Kick. Generally, you can maintain a little more momentum with the Dashing Attack, so use that whenever you can, and hit enemies with the Dive Kick whenever there is a larger gap in between you and them, or they are positioned above. Remember, you get quite a bit of height off of a Dive Kick, so you can also use enemies as a launch pad to clear obstacles. 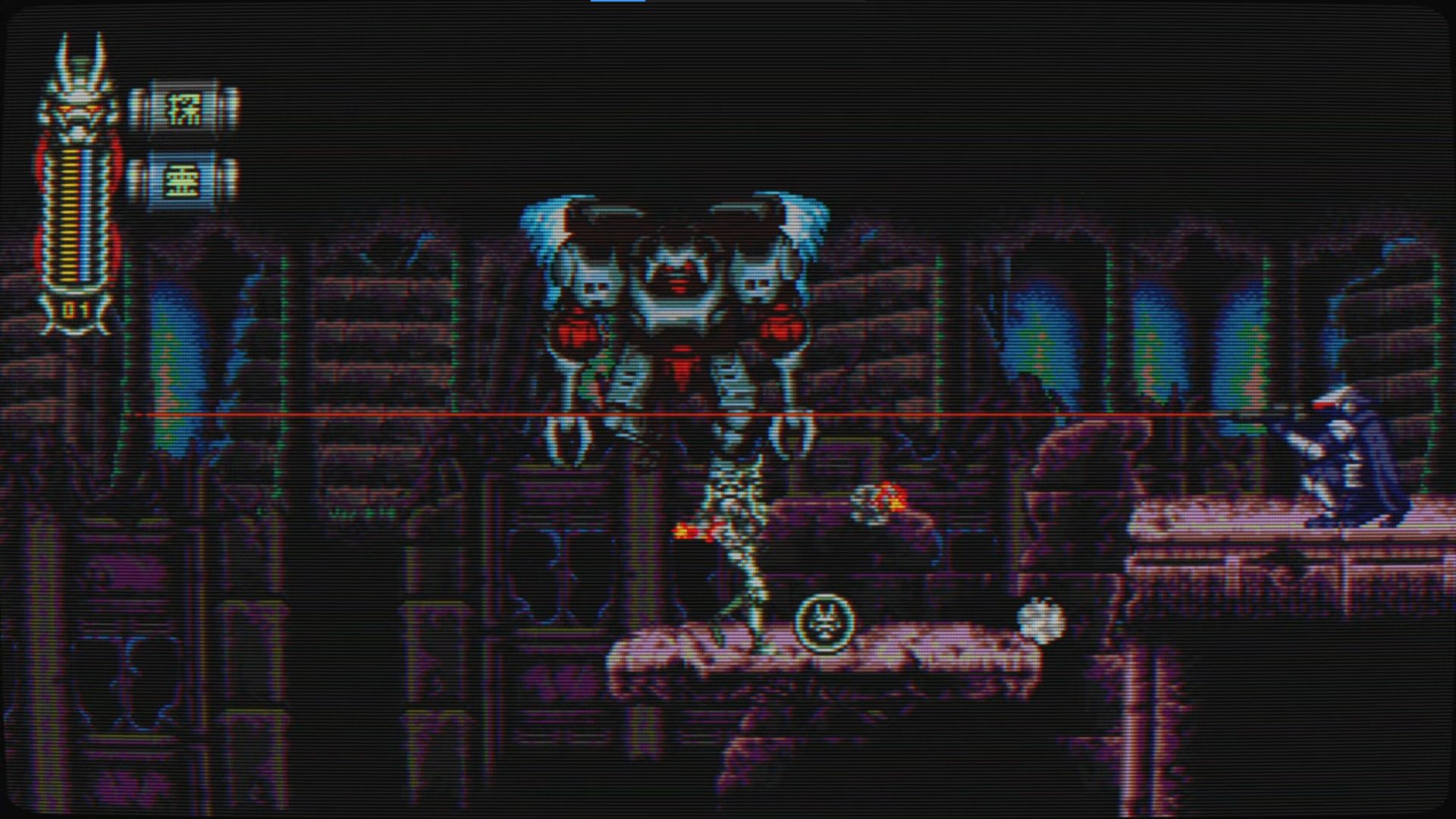 There is one extra life present here. It will be located in the power-up canister you encounter during the falling platform section. The rest of the power-up cannisters contain either health or MP regenerating items. So, don't stop for them unless you are severely injured. 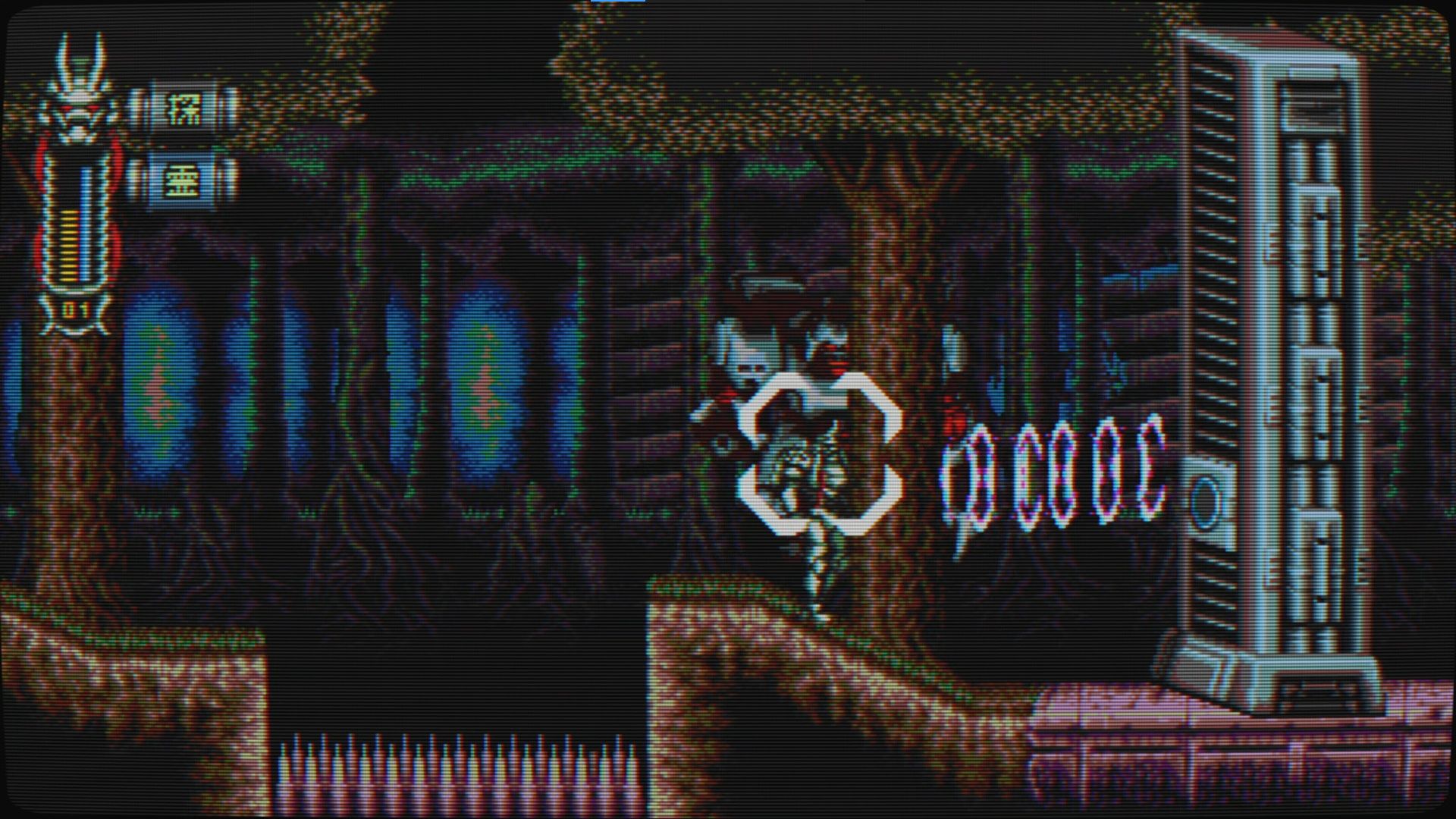 One more thing to tackle. You will hit two giant, mechanical walls as you progress through this stage. You need to hit the orb that is shifting up and down, while also avoiding the projectiles from the robot in the distance. There isn't much of a trick to this, though if you have the Stormshot special weapon, it is great for taking that orb out quickly. 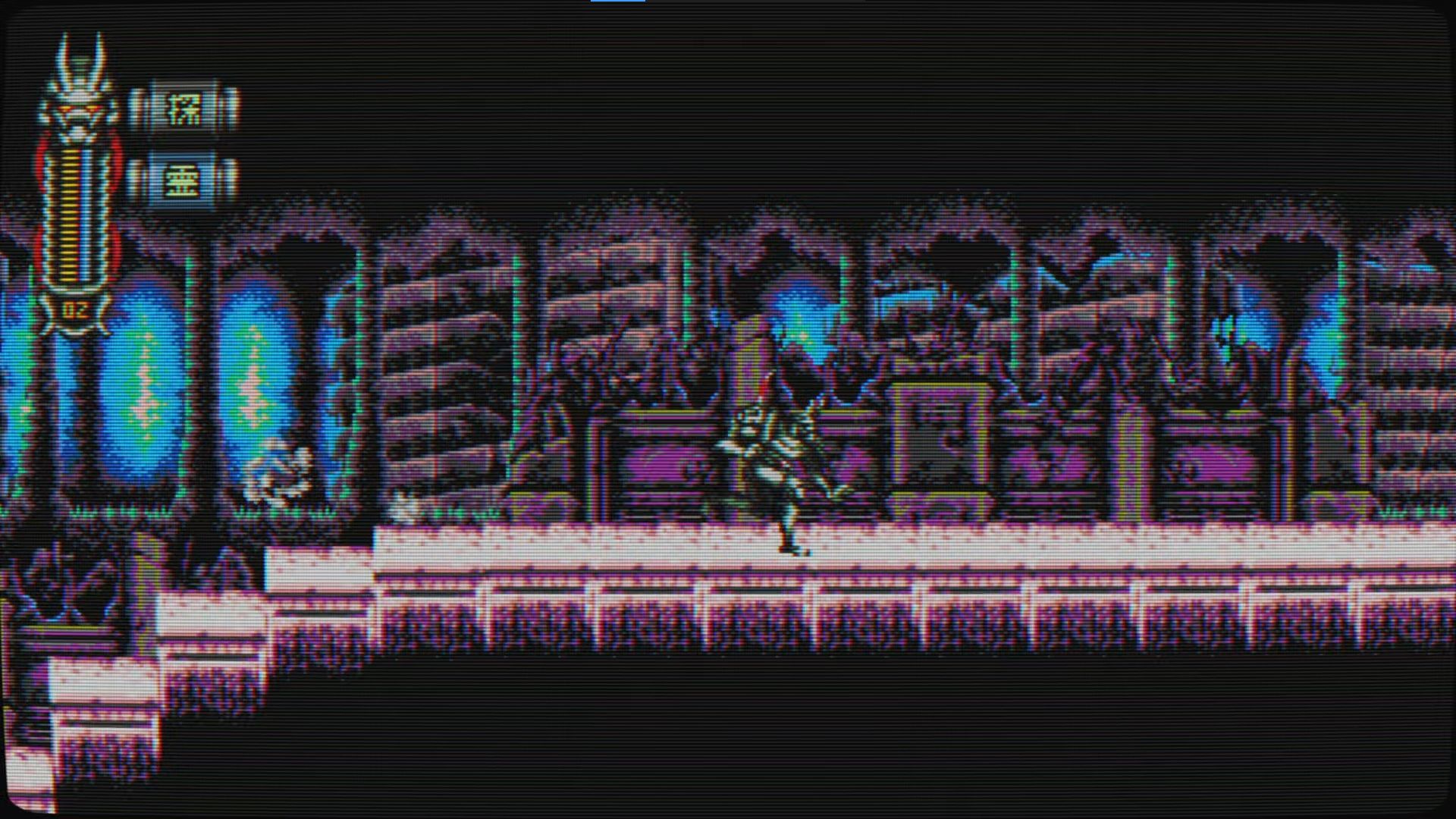 When you hit the section with the falling platforms, try to grab the item (it is an extra life), but other than that, just sprint to the right, and you will be fine. 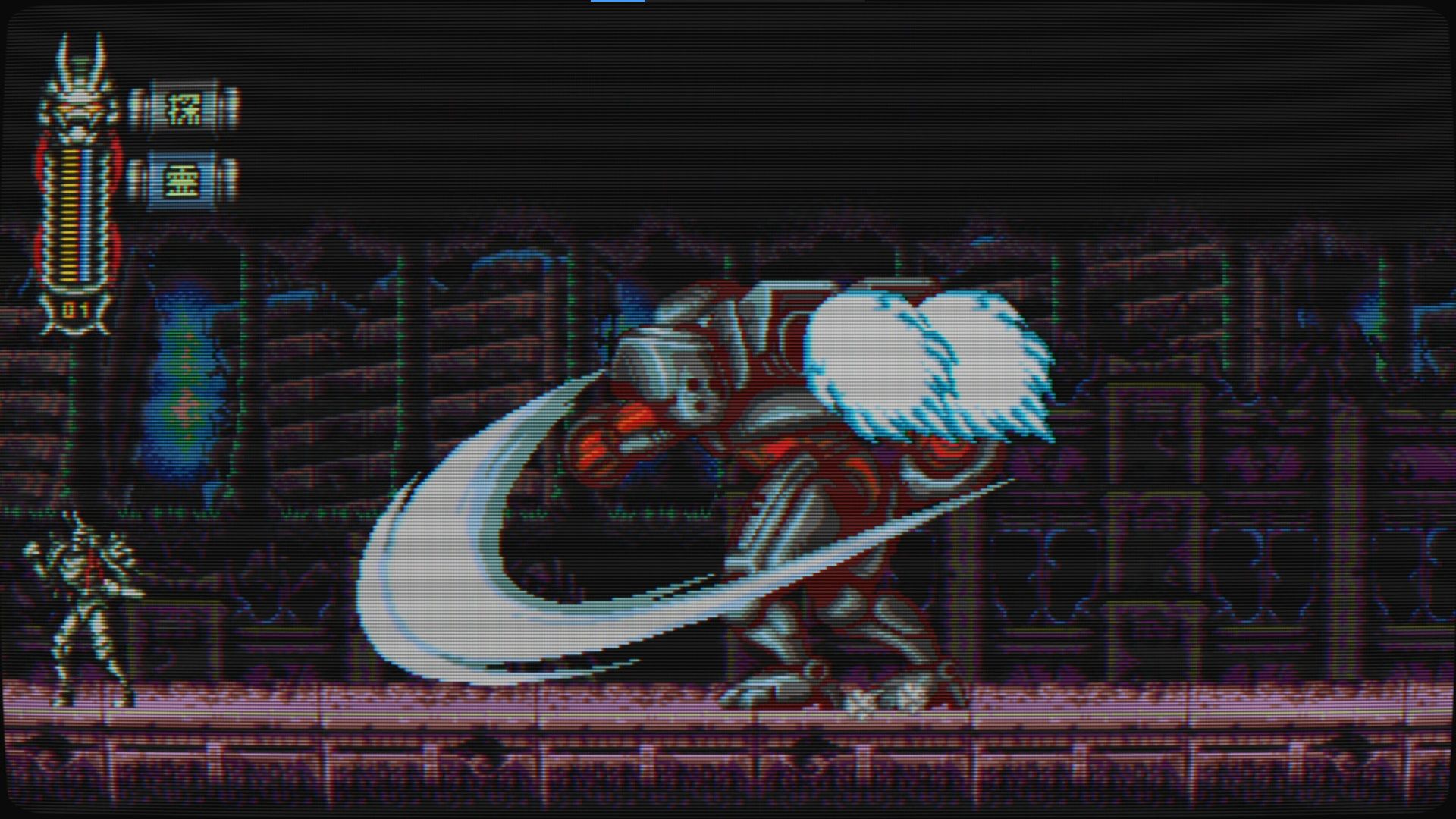 Once you reach the end of the stage you will finally get an opportunity to strike back at that robot that has been stalking you. This boss has two primary attacks. It will take two giant swipes at you, which will carry it across two thirds of the screen, or it will fire a heat-seeking missile at you. The missile will track to your location. When it lands, it will leave behind a wall of fire. Ideally, you will guide the missile to the corner of the screen. That way you won't have to deal with the fire. 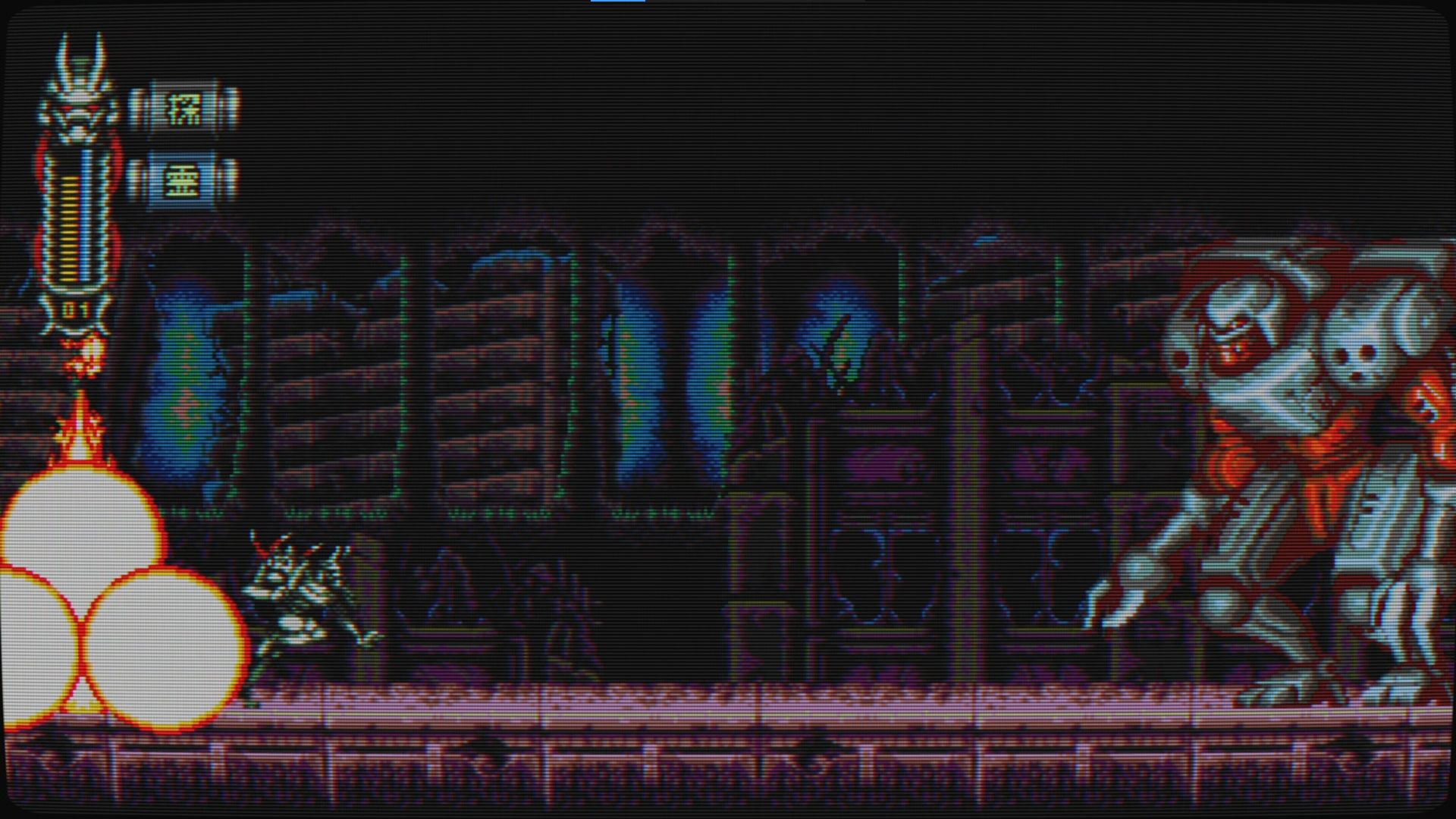 The best way you attack this boss is to hit it with Dive Kicks. Don't hover directly over top of this boss, as then you will be hit by the missile when it fires it off, you want to bounce back a little bit, and then dive back in with another of your angled kicks. This method nullifies both of the bosses main attacks. However, it does sometimes perform a jump to get to the other corner, and it will probably clip you when it does one of those. 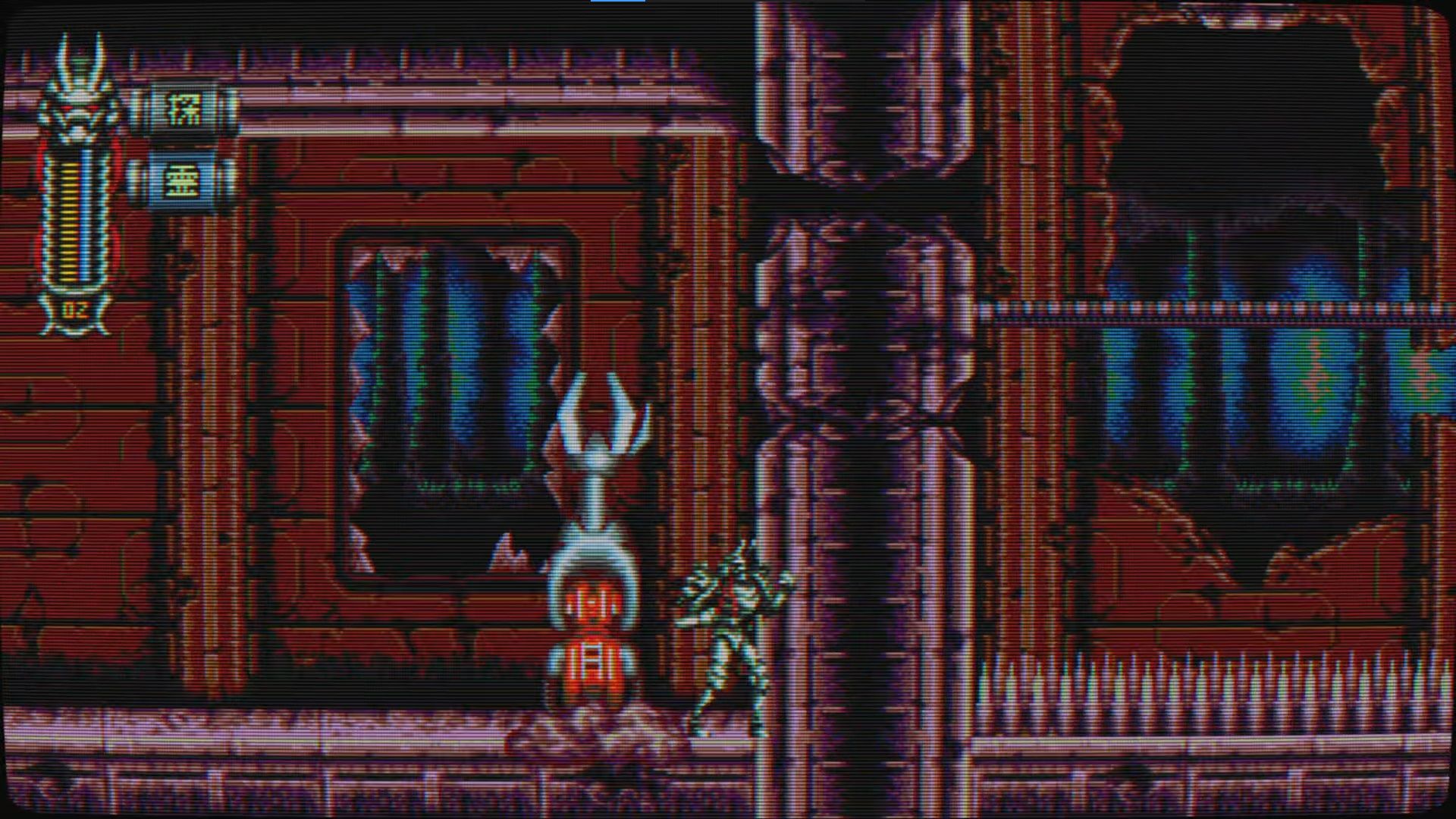 The second part of the Fallen City is pretty similar from the first. However, instead of dodging the firepower of a giant robot, you will be dodging their limbs instead. If you stay stationary in one spot too long, a limb will break out of the nearby ceiling or floor and strike you. What complicates matters are the giant pieces rubble blocking your path. You will need to slash your way through. The solution to this problem is simple: when you see a piece of rubble coming up, pause for a moment a couple of character lengths away from the rubble. Then, when you see the limb coming, rush forward and attack the rubble as the robot flails at nothing. 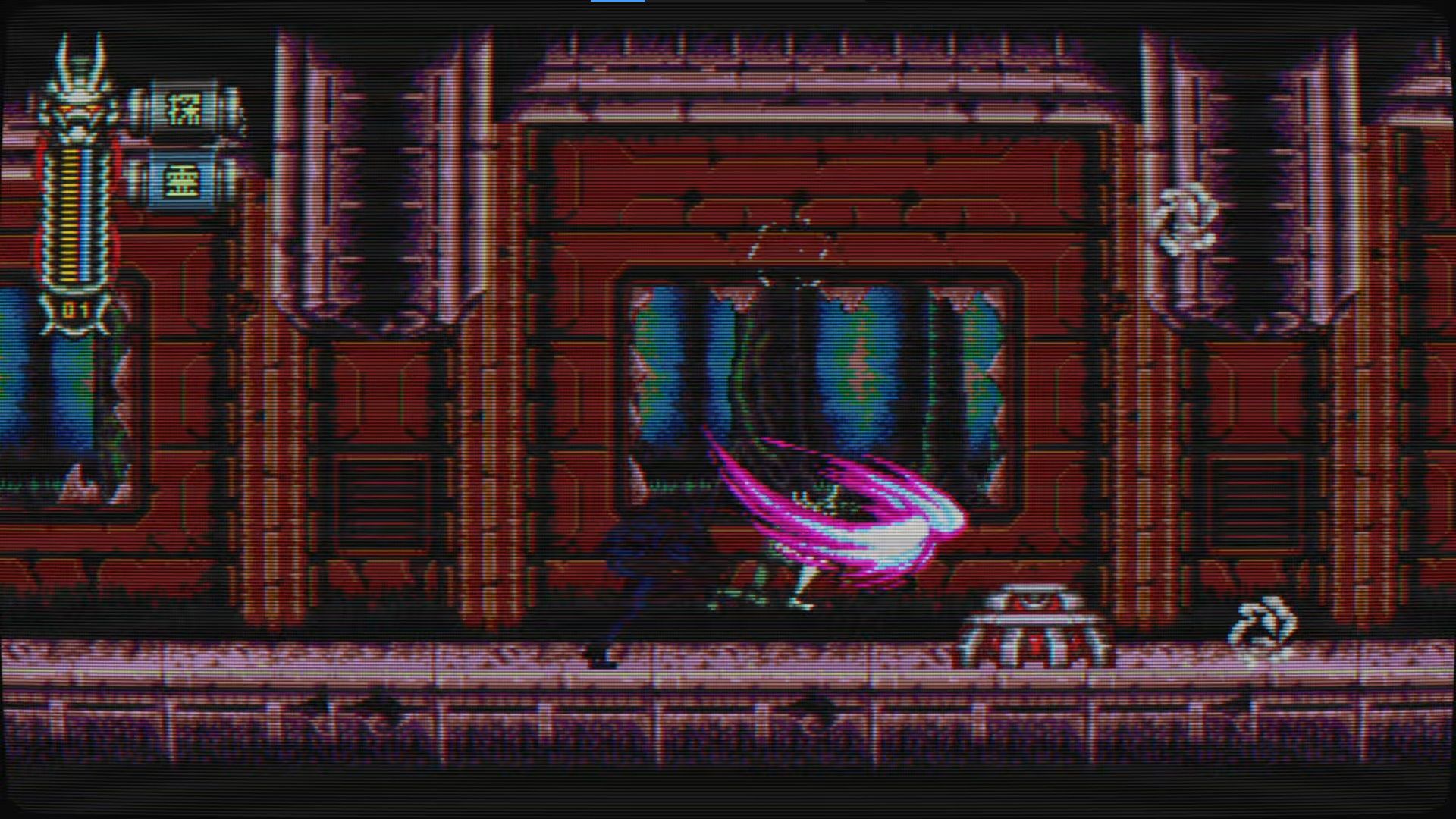 You will be facing off a few different troops in the ruins. There is a spider-like droid, and some of those red soldiers that rush forward. Just be ready to take them out with a Dash Attack whenever you see them. You are still going to be rushing forward in this stage, so, ideally, you will never even see any of their attacks. 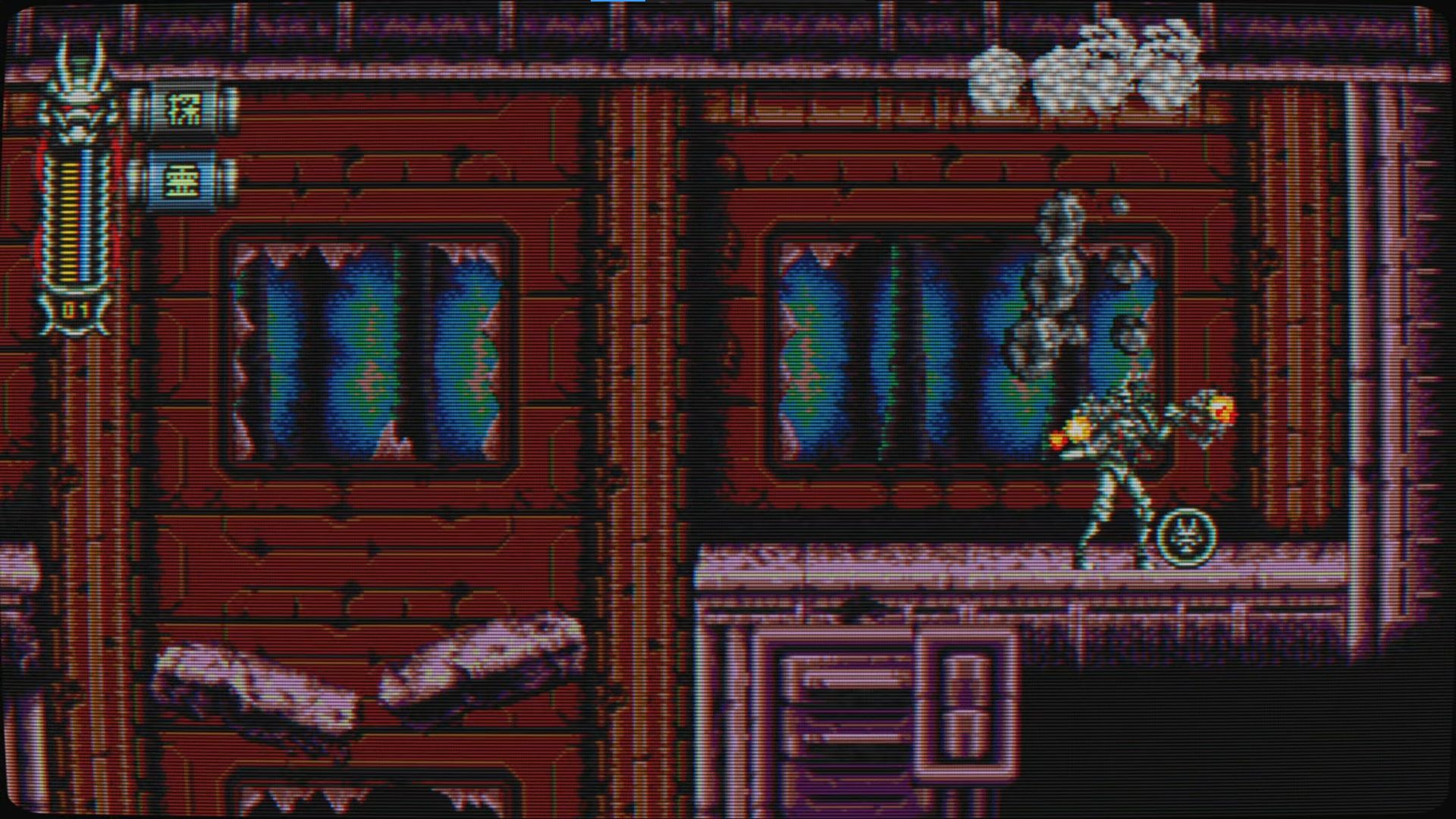 Once again, you are going to want to skip most of the power-up canisters for the sake of time (unless you are near death, that is). However, the canister on the far-right, just after the robot limbs start coming for you, holds an extra life. That one is worth getting. 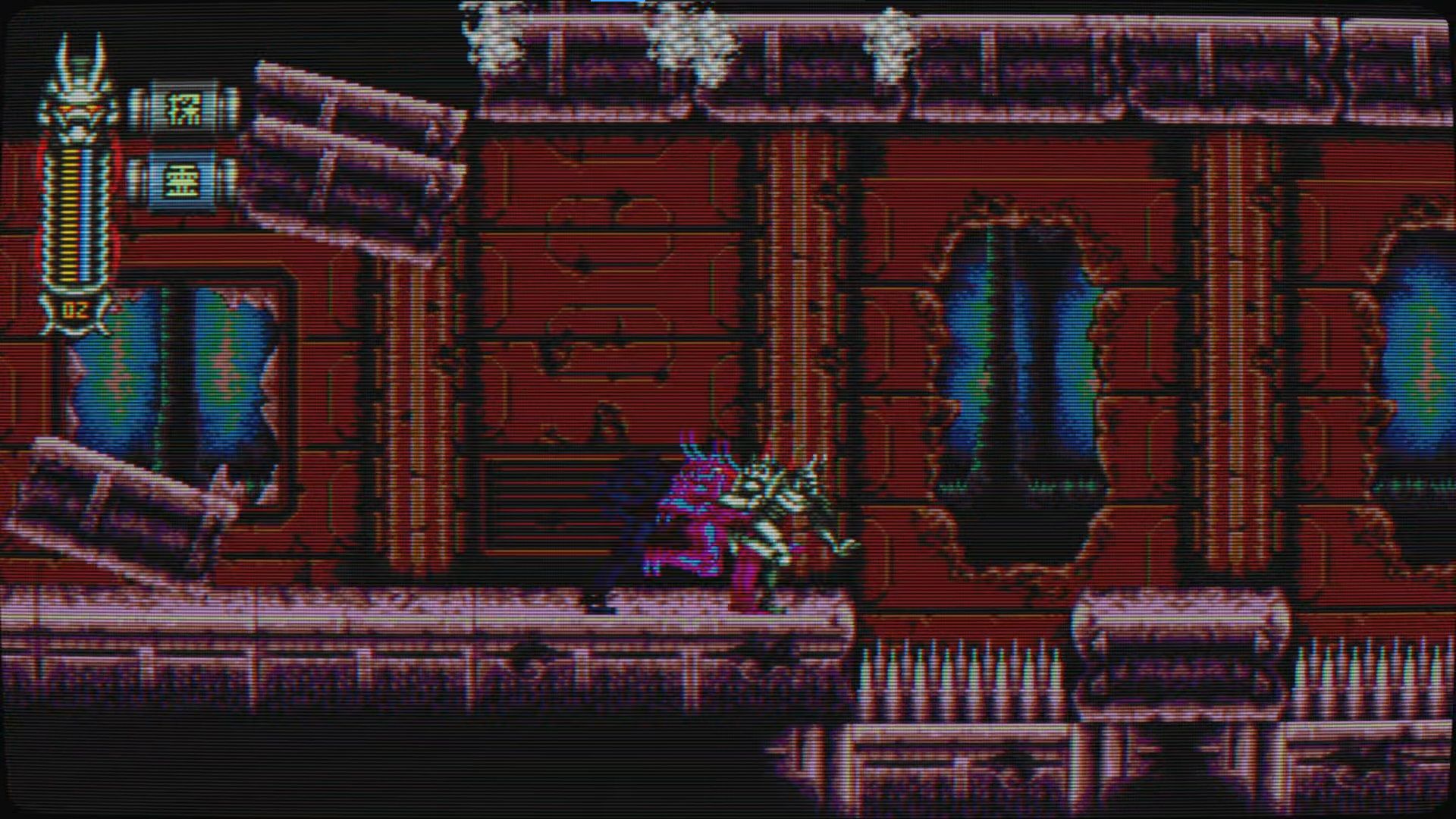 Beyond that, just keep pressing forward. You will come upon a segment of the stage where everything is collapsing. Just sprint forward, and tap the jump button to get the short hop in order to get over ledges and cross pits. There is no time for stopping! 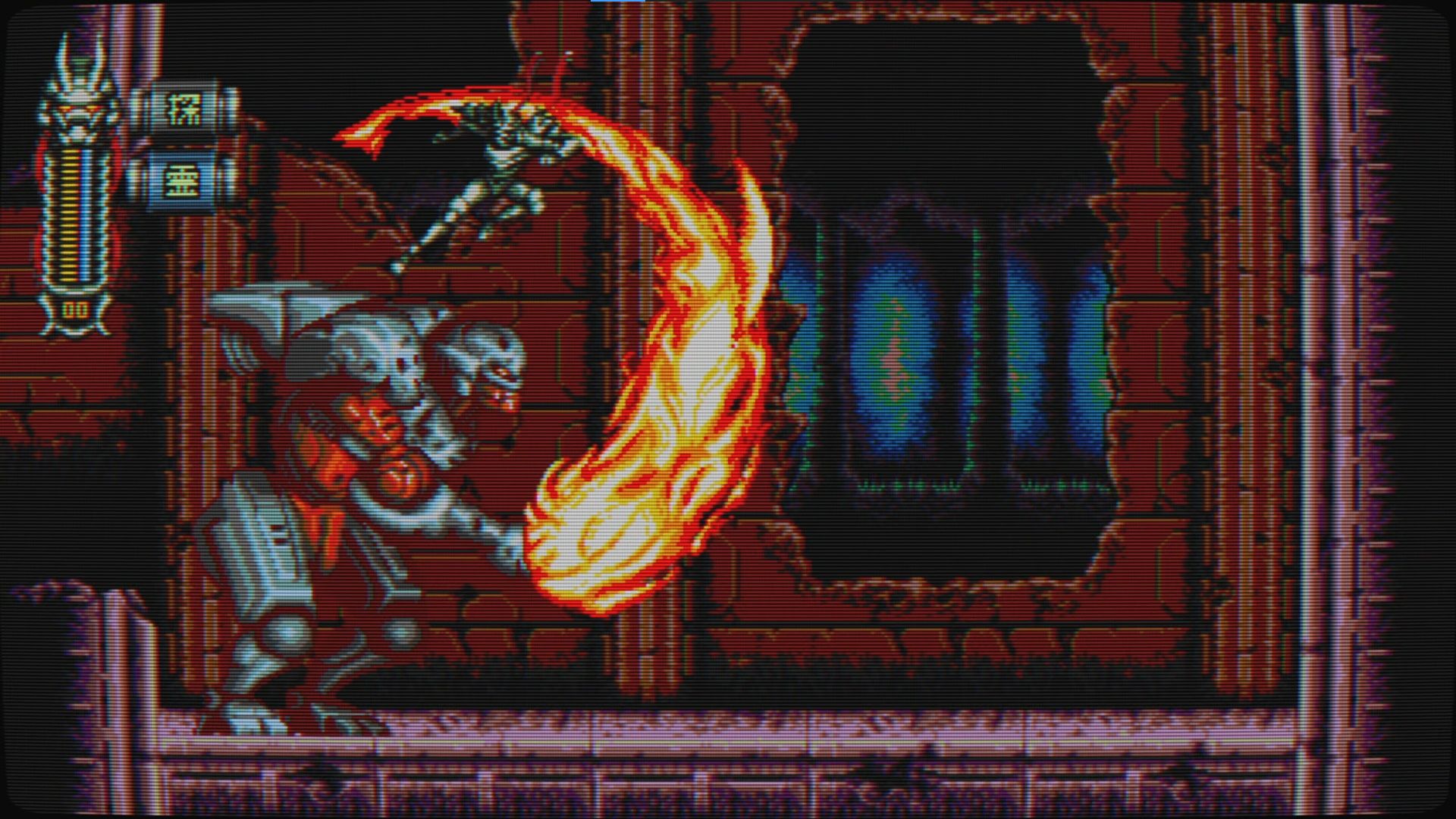 It is time for round two with this giant robotic fiend. At first this battle seems much tougher. It now has these giant projectiles, and it alternates between throwing them high and low. It will also shoot a tracking projectile from its mouth. However, shockingly, the clawing motion it does to create those giant half-moon projectiles. Which means that this boss is completely destroyed by the Dive Kick (good ol' reliable Dive Kick). 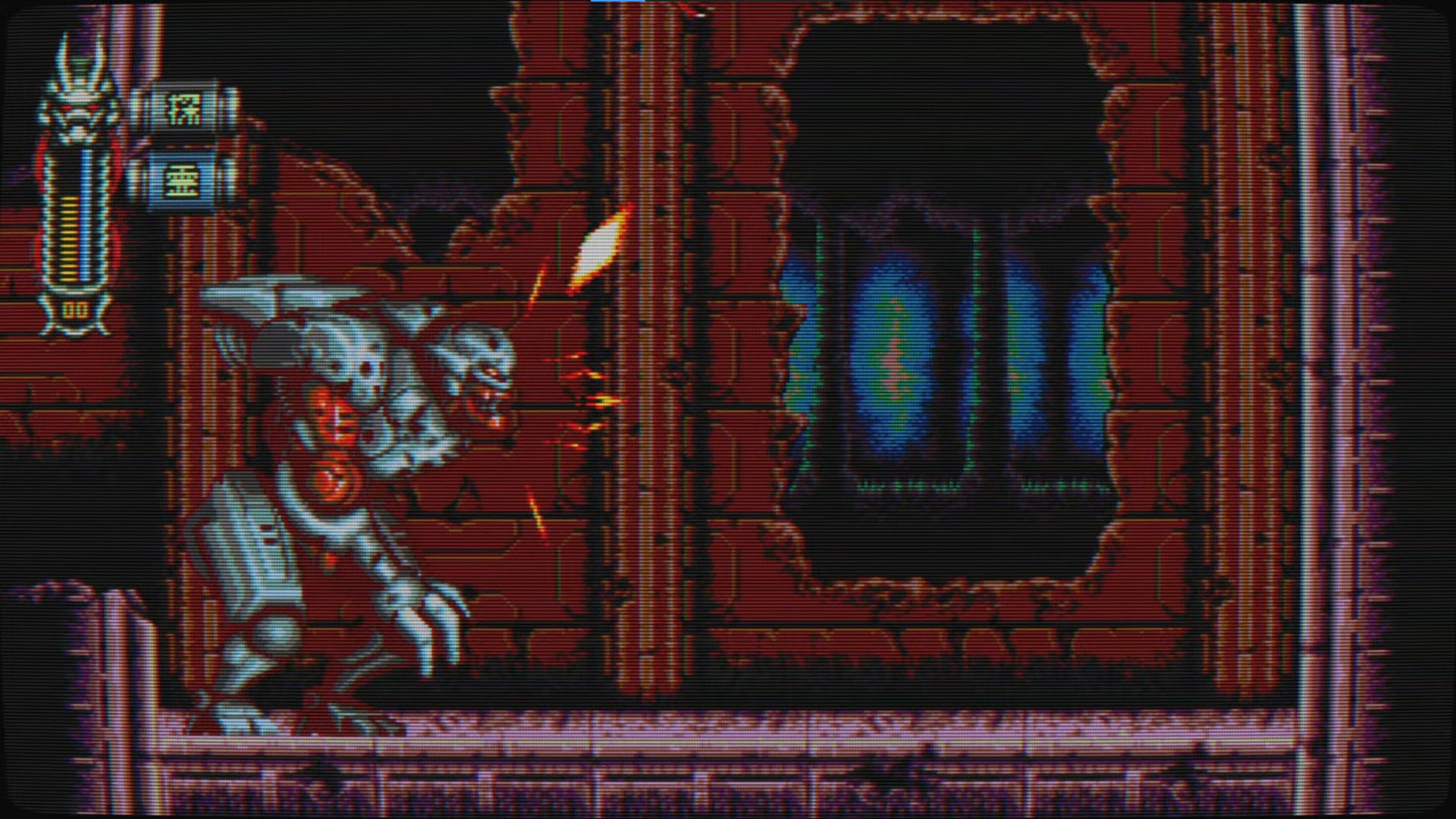 The homing projectile it fires from its mouth is trickier to dodge in the air, so when it does that, you are better off going back to the ground. Otherwise, Dive Kick it to the head until it dies.

Once you defeat the boss, everything will be set on fire. This is one of the few times in the game where a stage obstacle will kill you if it touches you, so this section is super dangerous. However, here is the path you need to take…