Warhammer 40,000: Chaos Gate – Daemonhunters is split (mostly) into two parts – galactic long-term planning, and turn-based combat. Because Nurgle’s putrescent children are boarding on endless, you will likely spend most of your time engaging in the latter. Effectively engaging in it, however, is another matter entirely.

Chaos Gate is complex, it has a bunch of systems working in the background, and whilst a lot of it is explained via tutorials, there are some things left suspiciously vague. Heck, sometimes you might just forget something exists because of the information overload. That’s where this guide comes into play – we got you covered.

Remember To Stick To Cover

Don’t let your Grey Knights and their Truesilver Armor lead you down a cognitive cranny fuelled by hubris and overconfidence. Your guys may be tough – heck, they may be outfitted in the finest Armor ever forged – but they aren’t immortal.

Whether you are decked out in Power Armor or Tactical Dreadnought Armor (Terminator Armor for you newbies), bullets, swords, mind shenanigans – they all hurt. Take too much of a beating, and you will find your Knights falling shockingly fast. Standing out in the open, for the most part, will lead to a swift demise.

This is where cover comes into play. Slap your boot against a waist-high wall, or solid chunk of ceramite and hunker down. Cover is vitally important to your success and sticking to it as much as you can – especially when there are guns everywhere – is advised. Cover comes in two forms, Partial and Full.

Partial cover reduces the damage you take when fired at, whilst full cover completely negates the damage. Of course, this is entirely dependent on the angle, and enemies will absolutely try to flank you, so bear that in mind.

Move Up As A Squad 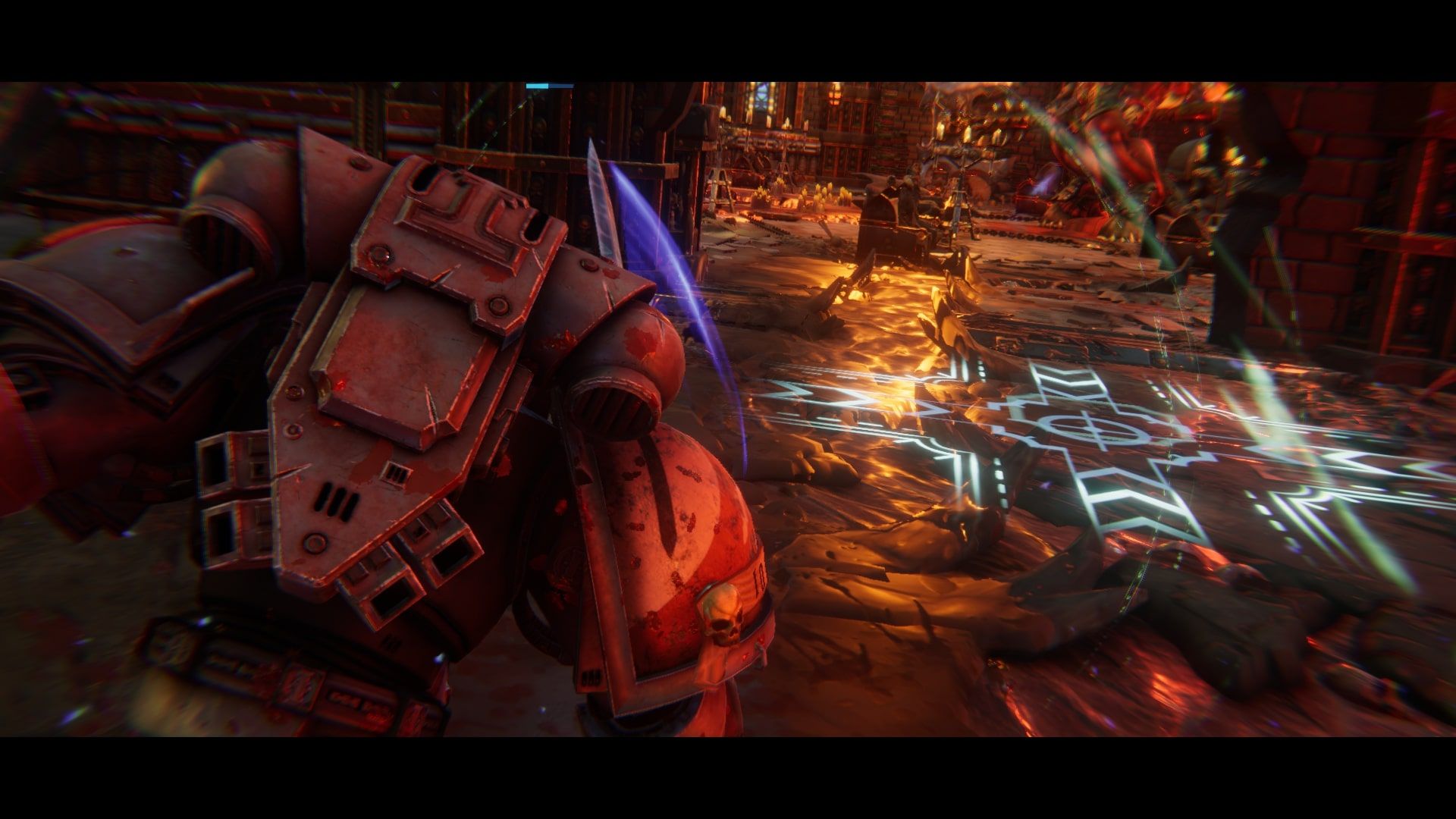 Each Space Marine is worth one hundred lesser men according to the imperium. This is a white lie told to exaggerate the power of the blue-hued boys of Titan. The true strength of an Astartes lies in the indefatigable efforts of their brothers, and this is front and center in Chaos Gate.

Keeping your squad together lets you cover each member's advance, retreat, or assist in watching over potential lanes of advance. A squad is only as effective as its weakest link, and if that link is some dingus trailing behind the rest of the team, well, things are going to get hairy awfully fast.

Outside of the in-combat benefits of having more guns to bear at any one time, keeping your squad together lets you start engagements more effectively. Combat immediately starts once you bump into an enemy unit, so if your squad is in position when that happens, you get a tangible advantage.

Get To Know Your Range 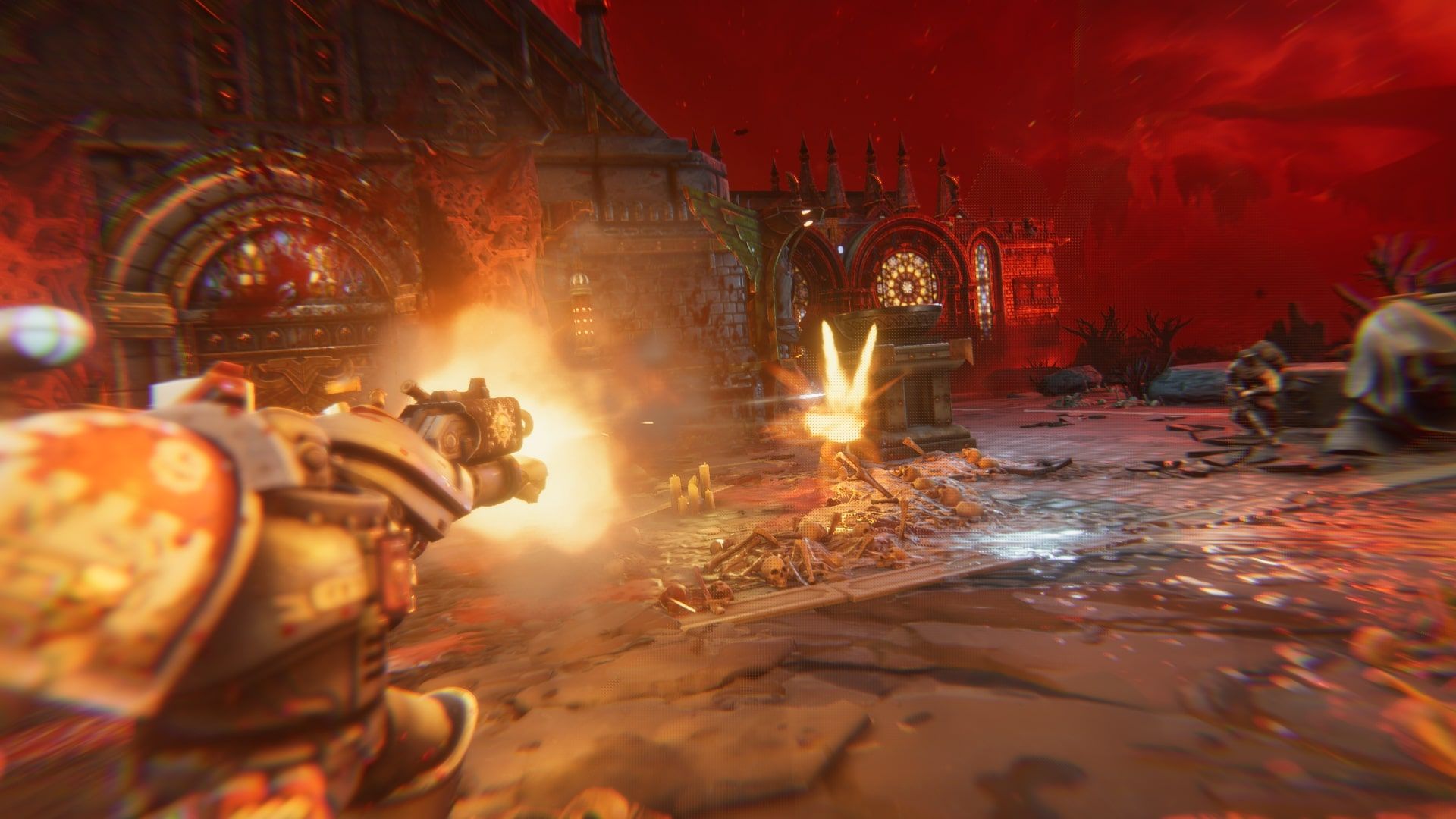 Range in Chaos Gate is incredibly important. Most weapons in your starting arsenal will have a range of 10, which is pretty darn short in the grand scheme. Heck, your marines can actually throw grenades further than they can shoot.

Some weapons and abilities can reach out and touch enemies from further away, but the relatively short distance of your Astartes Storm Bolters is telling of how the game wants you to play. You want to be fairly close to the enemy, not hiding away. Most Grey Knights have access to powerful melee weapons – use them when needed.

Not only that, but your weapons deal less damage the further away the enemy is. Limited range in addition to damage fall off pushes you into mid-range combat, so embrace it and get stuck in. Keep some longer-range gear on hand, such as grenades to reach out and disrupt enemies with longer-range guns than you, however.

Ins And Outs Of Overwatch 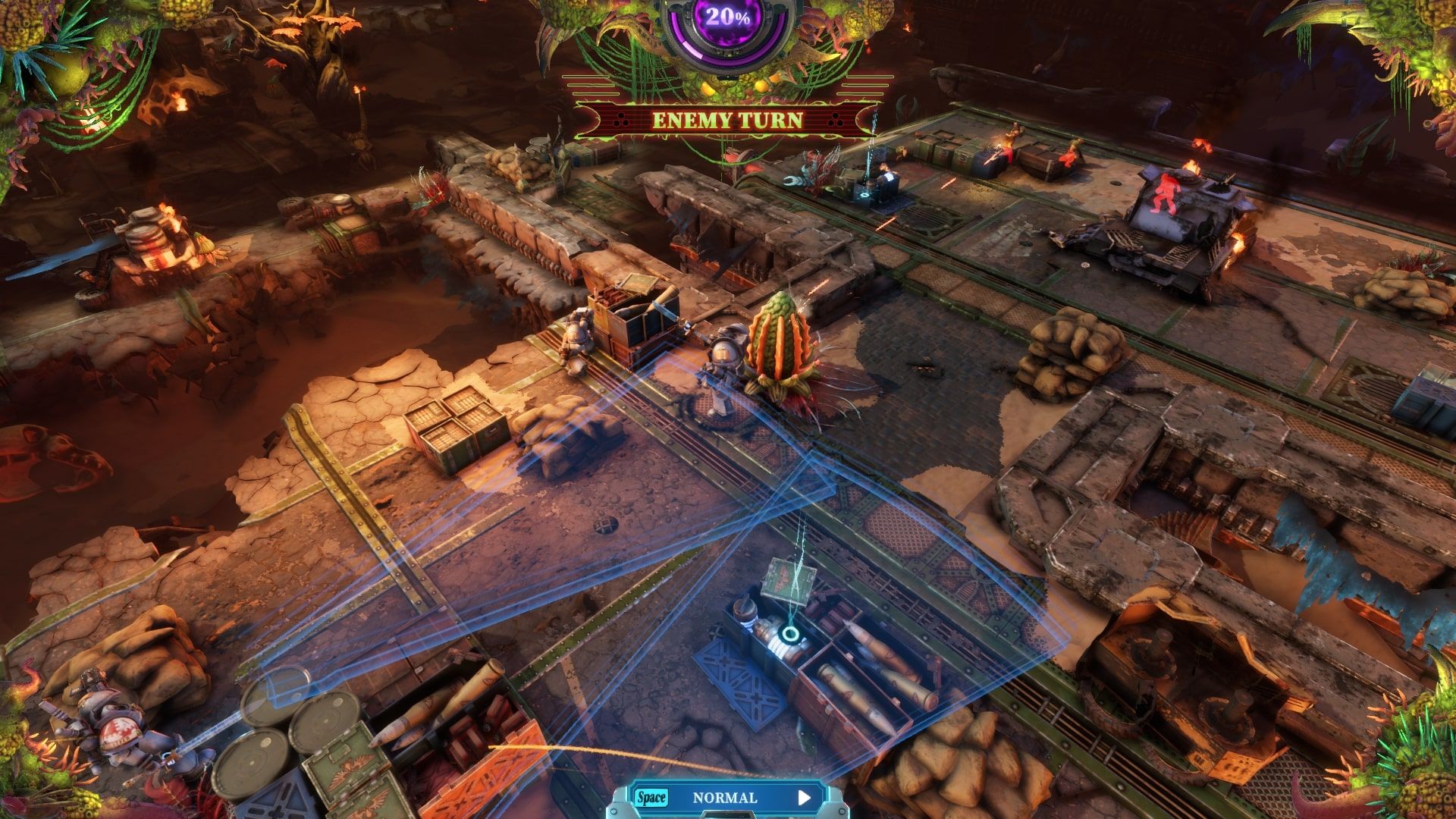 Overwatch in Turn-based Strategy games tends to be a powerful way to play. Move up, set up, gun down anything that moves. Overwatch in Chaos Gate is not that kind of thing. In fact, Overwatch will get you killed if you try to use it incorrectly. A number of factors play into this, firstly, range. Overwatch nearly always reduces the range of your guns – which means enemies can shoot you before you can shoot them. This wouldn’t be an issue had the game not done something sneaky.

When you set up Overwatch, you are no longer in cover. If you are planning on Overwatching when there are ranged enemies, you knights will get riddled with bullets, and your guys won’t be able to fire back.The final nail? It’s ammo dependent. Most guns in your arsenal – especially early on – have very limited ammo capacity. This reduces the damage your overwatch can do and makes it much less effective than just shooting someone.

So, should you use Overwatch? Yes, but only in certain circumstances. Some enemies are purely melee-based, so setting up lanes of fire and shooting them as they advance – especially if the ranged threat is dead – is an excellent use of AP. 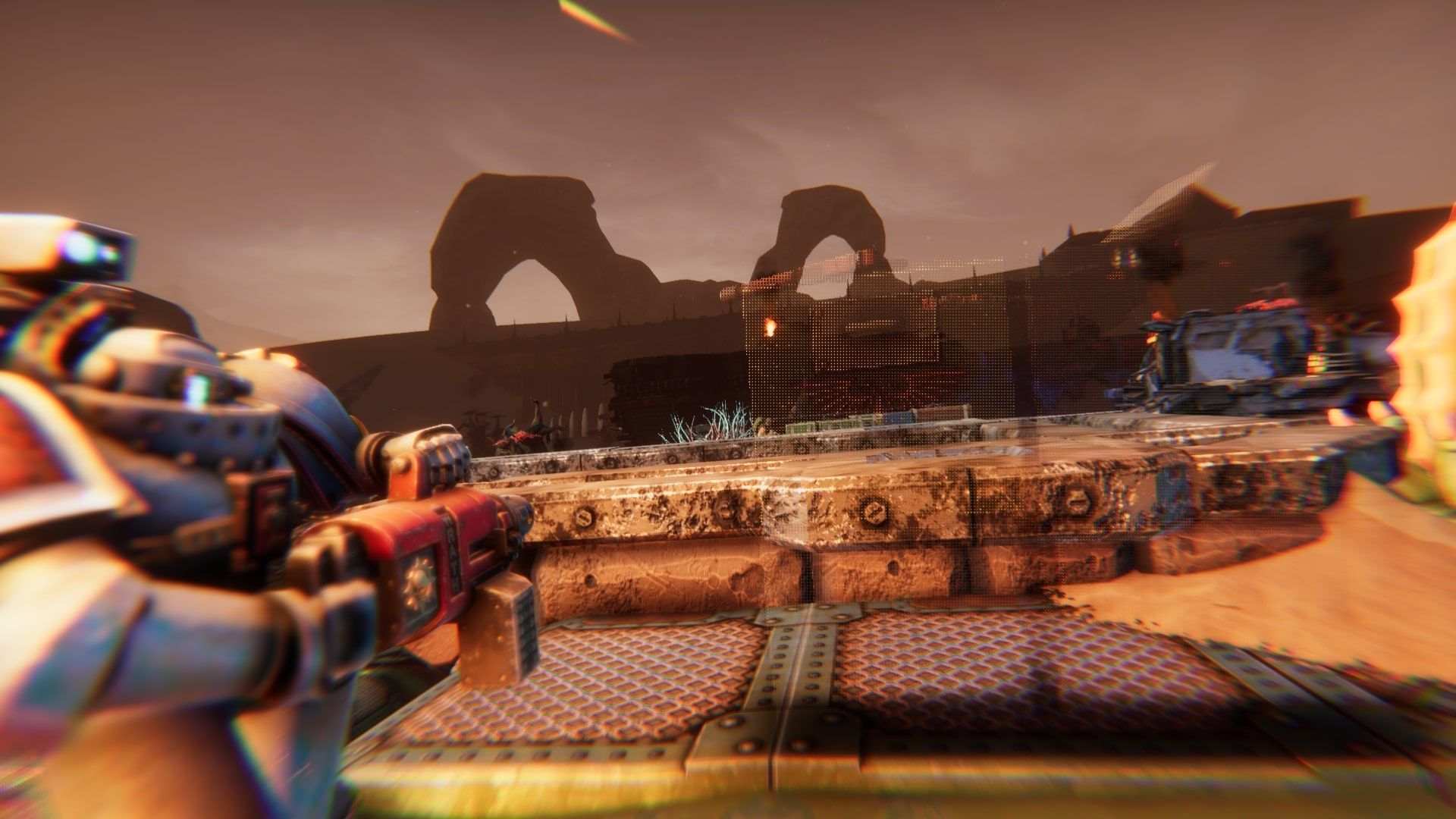 Ammo is a big deal in Chaos Gate. Your basic guns deal buckets of damage but need to be reloaded often. Your bigger guns have even less ammo. It’s not uncommon for your early Psycannons, for example, to have less ammo than your available AP, making them incredibly inefficient as you need to reload constantly.

If a Knight has spare AP and is in a relatively safe space, then spend that last AP on a cheeky reload. You don’t want to be caught with your pants down when a swarm of Poxwalkers comes knocking.

This also makes upgrades that increase your ammo count, or trigger automatic free reloads exceptionally powerful. Some weapons have abilities that burn your entire clip, such as the Psilencer (the P is psilent), but deal damage based on your remaining ammo. Have a fat stack, and you just do more damage. Simple as that. 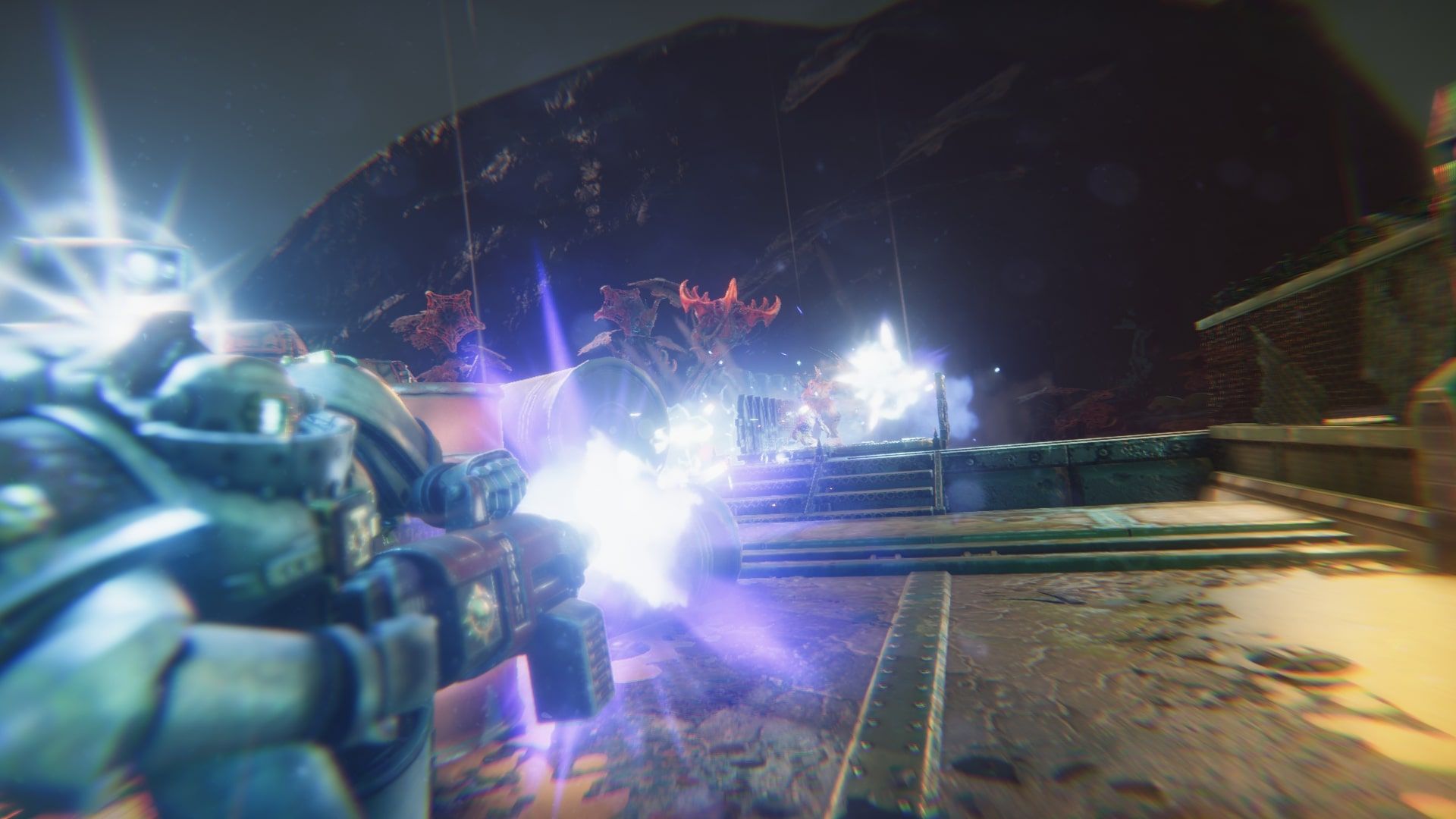 Action Points are the lifeblood of your Knights, and keeping an eye on how many you have, and how many you can stuff into any one turn, is essential. As standard, a Grey Knight has 3 AP. This lets them move, shoot, stab, interact, etc. three times before they are done for a turn.

You can combine your Actions in any order, giving you plenty of freedom on how you want to engage the enemy. The thing is, three Action Points isn’t a lot – especially when you are on the move, or if you are packing a big gun. Moving your Psycannon into range to fire is an AP, then you can fire twice, draining all of your ammo. You won’t have the AP to reload that turn, which puts you in a deficit next turn.

Three is just enough AP to allow you to do some of what you want, but not everything you want to do, and that’s where AP manipulation comes into play. Certain abilities, often found on the Justicar, allow you to pass AP to other Knights. There are one-use global abilities that also boost AP for a turn. Executing enemies after stunning them will also grant AP to all of your Knights for that turn to boot.

Effectively assigning and spending AP is pivotal, and scraping every last ounce of value out of your available resources can be the difference between victory and defeat. 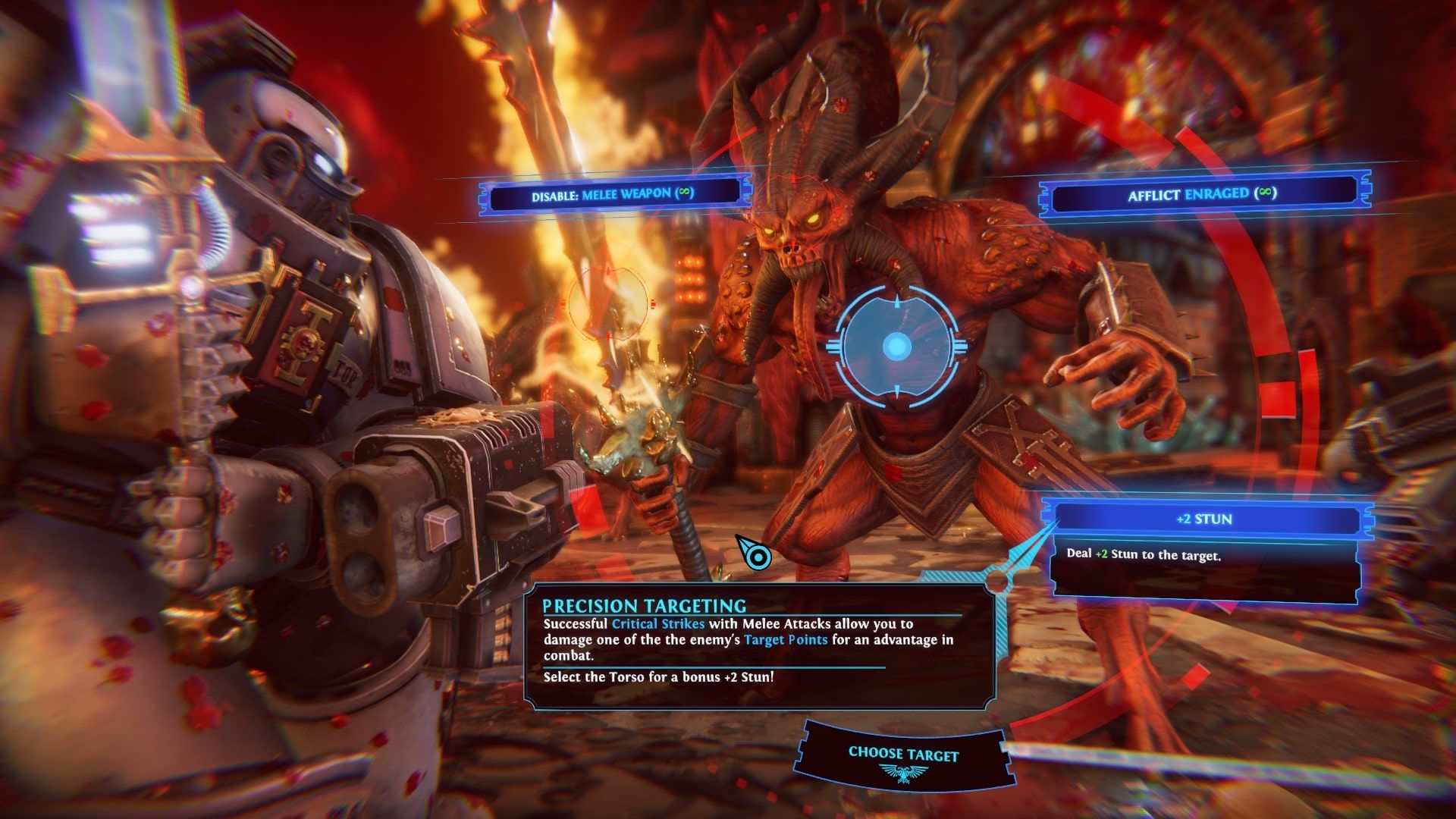 The Critical Hit system in Chaos Gate is one of the most interesting aspects of combat. These not only deal bonus damage, which is always nice, but they give you the freedom to aim your shots at specific body parts. If you don’t want to deal with a specific gun or mutation, then you can blow it off with a well-timed round of bolter fire. You can even cut things off in melee.

The Catch? It’s random, and the odds are not in your favor. The thing is, the combat is very much centered around this – especially in boss fights. All sorts of abilities play into Critical Hits, such as increasing your damage, so leaning into it makes sense.

Thankfully, Chaos Gate has a solution. Stunning the enemy. Every enemy can only take a certain number of attacks before they fall to their knees. This is represented by the skull icon next to their health. Once this reaches zero, you get a free Critical. 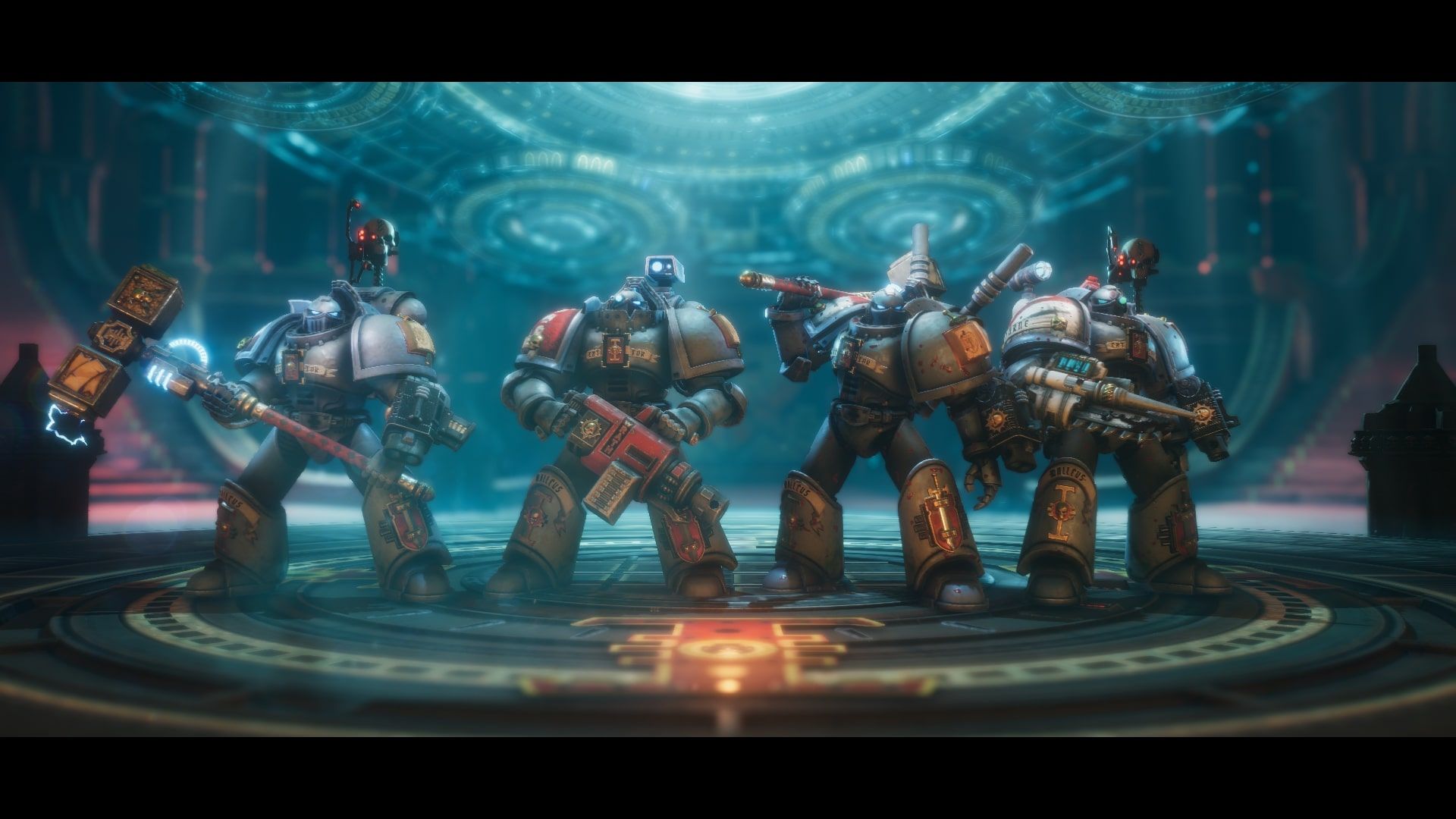 We’ve already covered cover, but there are other ways to negate damage and stay healthy. This is with Armor and Resistance. Armor will absorb damage taken up to its value, preventing HP damage. Naturally, having some Armor will make your Knights much harder to kill.

The thing is, your Knights don’t come with Armor as standard. Armor is often reserved for Mastercrafted suits of armor and Terminator Armor. Armor opens up new ways to play since you can tank damage safely – to an extent. Having a Justicar running around in Terminator Armor can take the heat off of your other member, for example.

Not only that, but all of your Knights come with an active ability that gives you two Armor at the cost of 1AP. This might not sound like a lot, but if your Knights are caught out of position, it can save lives.

Resistance is all about preventing debuffs and negative effects and is entirely percentage-based. Nurgle loves to debilitate your Knights, so having some Resistance can massively reduce the effects of enemies. You don’t want to be hobbling around with Nurgle’s Rot dealing constant tick damage after all.

Use The Environment To Your Advantage 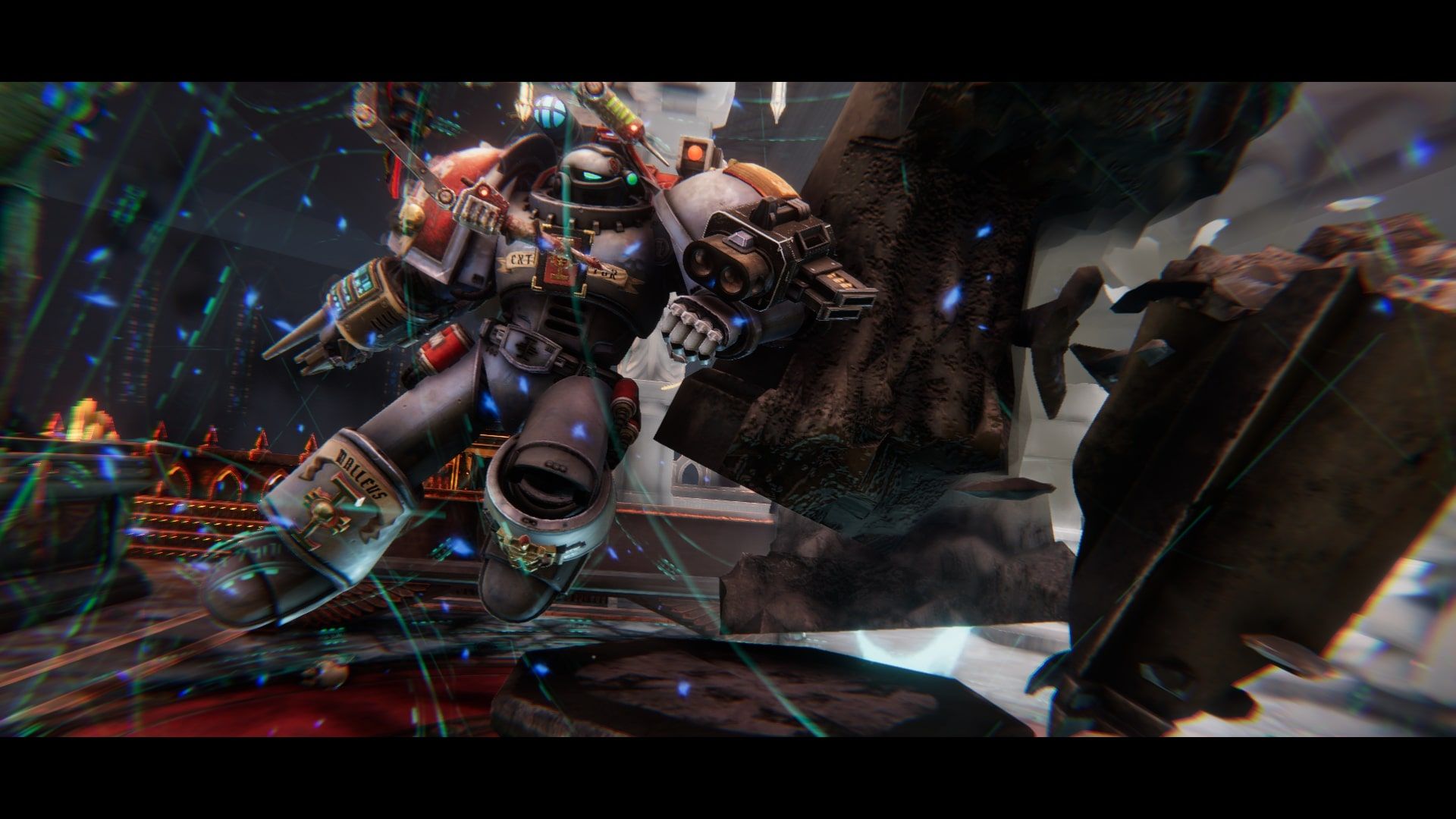 The gun strapped to your wrist is a mighty weapon, as is the grenade holstered on your belt. Do you know what else is a weapon? The world. Literally. Chaos Gate’s maps are littered with interactable objects that can be used to your advantage.

At a base level, cover can be destroyed. Throw a grenade or shoot enough bullets into something, and it will break down leaving them exposed. This is pretty simple and easy to achieve.

That’s not all, huge pillars and statues can be destroyed or literally pushed over to crush enemies. Using grenades or other skills with knockback can launch enemies into bottomless pits. Blowing up entire walls to breach a building is not outside the realm of possibility. Experiment, mess around, use the world.

You can even cleanse things to gain resources, such as Seed Pods. Turrets can be cleansed to turn them to your side. Touch everything.