Warpips is a fun real-time strategy experience people can easily pick up, play, and try. The game can become challenging at higher difficulties, especially if you don't learn the details and strategies available. After all, the enemy will run you over and take you out.

Doing so requires understanding the available units, resources, and abilities. If you take advantage of and know when to use them, you can figure out the best strategies during battle. You'll learn how to play like a pro through them.

Balancing Your Loadout For Every Stage 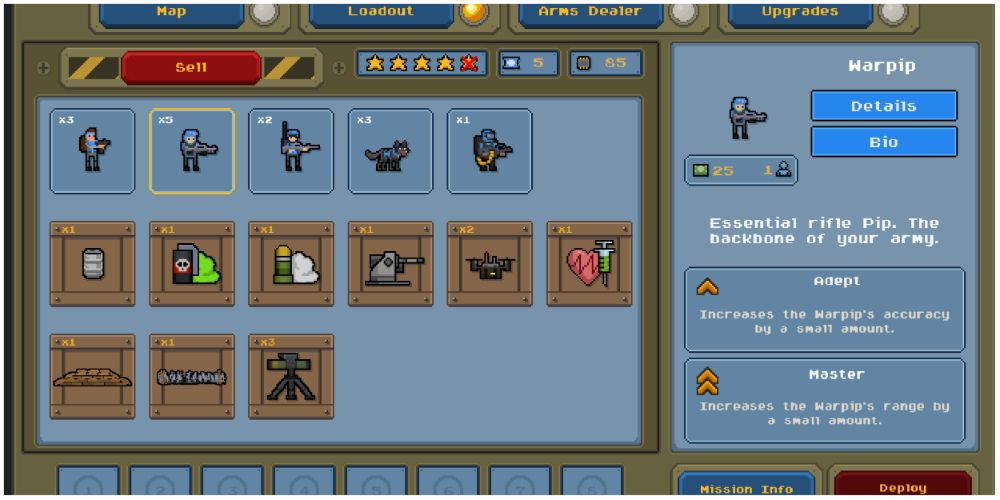 You only have eight slots available when you create a loadout, so you must balance it accordingly. If you don't know how to balance them, aim for two early-game units, one mid-game troop, and one late-game army member. Then, use the last four for resources, active abilities, and defense. For example, you can't go wrong with a standard Pip and the Pipsqueak, since the Pip is low-cost and can be helpful for early game pressure and in a pinch.

You should get at least one defensive barrier and the base's turret for those last four slots. Some people become so focused on the early or late game they overlook the mid-game.

Even if you perform well early, the enemy can send out tons of units and reach your base to the point where you find it nearly impossible to come back. While the two-one-one formula doesn't work perfectly, it helps you develop your play style. If you don't know which units work for your play style, try the Random Battle mode. Doing so gives you random scenarios with different loadouts to let you experiment.

If you can't tell which units fall into which category, check what you need to get them in battle. Generally speaking, early-game ones only cost some cash or one pip, mid-game ones cost over 50 dollars and may require a combat point or two, and late-game ones can cost up to three combat points, over 100 dollars, and take up multiple pips. 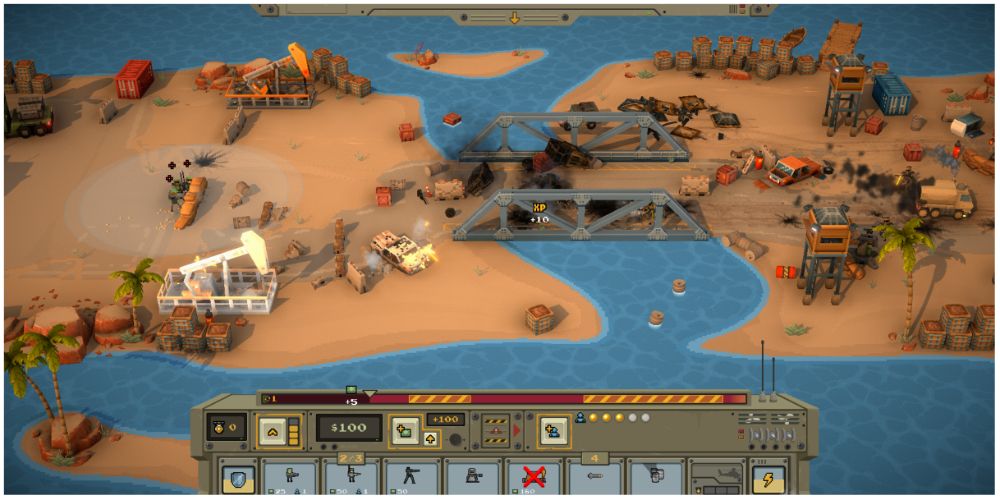 If you want to take out the enemy, you must build your resources early. You'll want at least 100 dollars per use of the cash button, so put two points into the cash upgrade button. You should also consider other ways to boost your income, such as oil barrels, oil derricks, and pumpjacks.

Oil barrels are available from the start of a match, allowing you to get a boost of money every time you activate it. It goes on cooldown for a bit each time you use it, so keep an eye on it and use it immediately to maximize your money.

As you use the barrels early, you should also take advantage of the oil derricks and pumpjacks. They cost more money and you can place them on the map. They give you money every few seconds, with the pumpjacks giving you more, which significantly boosts your income. The initial 160 dollars seems intimidating, but you can quickly reach it with about three combat points if you use them on the money button upgrade.

The enemy can destroy your pumpjacks and oil derricks if they get close to them and attack. Have some additional firepower ready to immediately take them out. For example, you can use the base turret or the missiles to damage vehicles or enemies who start attacking them. 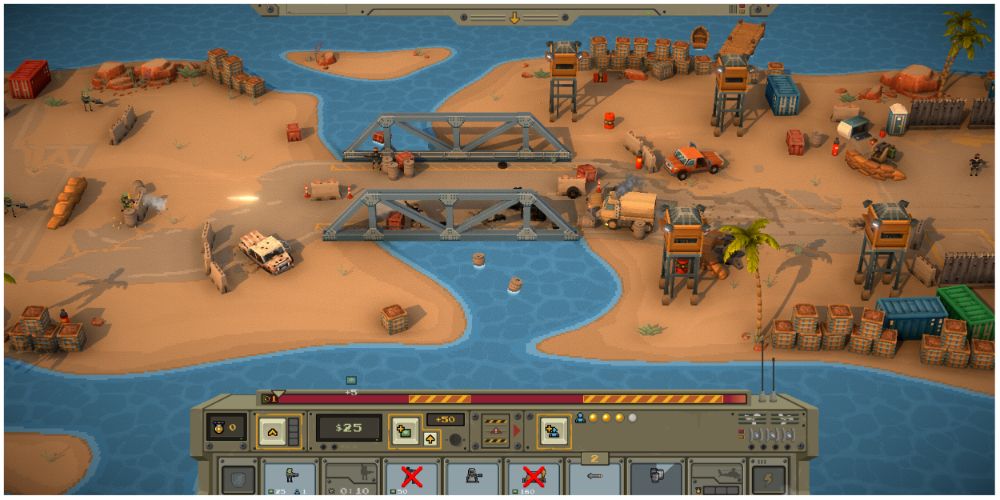 If you plan to play Warpips like a pro, you must practice your micromanaging. If you can't manage every aspect of your army, you'll be overwhelmed by the enemy. Micromanaging involves a few critical aspects of staying on top of the game.

Pips, levels, and money make up your primary resources, so you'll have to monitor them to ensure you don't run out constantly. You want to level up as soon as you get a combat point, so keep an eye on the experience bar at the top. The sooner you level up, the sooner you get the benefits, so constantly think about what you want to upgrade next, so you won't waste time as the enemy sends out its troops.

Your commands matter since the bar consistently fills up, so you don't want them to max out. The same applies to your cooldowns: you'll want to use some of them immediately, like the oil barrels and Pipsqueaks since they only benefit you. On the other hand, you may want to hold off on using the missiles since they only have so much range. Ensure you monitor these resources and determine the best times to use them. As you do, you can turn a fight around or minimize mistakes to avoid wasting time as you play. 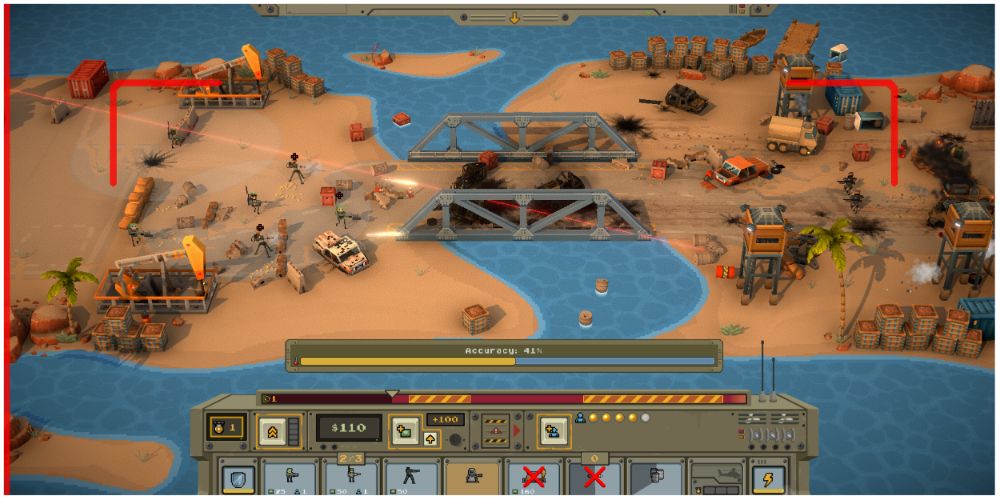 Counterpicking requires you to understand every unit and how they work. For example, standard troops like Warpips and Pipsqueaks work well for rushing down enemies and taking out other units. Their sheer numbers can help you get past other weak units. However, a vehicle will quickly take them out and make you waste your money.

On the other hand, you can counter vehicles by providing your army with defenses to hide behind. For example, you can place some sandbags ahead of time and let your units hide behind them before the tanks reach them. You can also place landmines in the path of the vehicles to stop them.

Since vehicles remain a common choice for the computer, especially early on, place some anti-vehicle turrets to attack the enemy when they approach. Ensure you check enemy units beforehand to learn and recognize them at a glance. 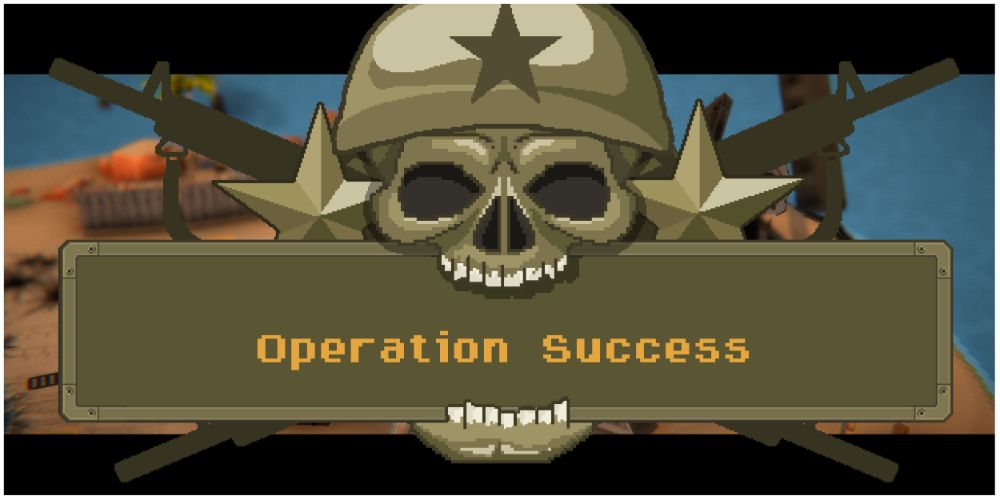 Like with any RTS, speed remains one of the most critical aspects of the game. Even though you can play defensive the entire time, pros will always push to end the match as soon as possible. The longer the match goes on, the higher your odds of losing thanks to the time meter at the bottom of the screen. Each time it refills, the enemy gains more strength, so you'll find it nearly impossible to push forward if you don't end the battle in a reasonable amount of time.

Instead, you must push yourself through the game's stages as quickly as possible. The enemy will push and focus on speed, so they won't wait for you to prepare for their attacks. Do what you can to immediately react to your enemy and check on them regularly. Ensure you check on their base every 10 to 15 seconds to look for changes and new units. Doing so will help you react to them quickly, so you can stop their advance before reaching the map's halfway point.

Becoming a pro involves mastering the shortcuts. Use the preset shortcuts to summon units quickly, look at the enemy, and activate your Assault and Defend commands. If you play on the computer, go with a keyboard over a controller since the keyboard shortcuts are faster and more effective.