Which loadout should you be using in Call of Duty: Warzone? Here are our best loadouts in Season 5.

Warzone is constantly getting patches and updates that make tweaks to the game, big and small, that keep the game interesting. It also can turn great weapons into ones that are just decent, and terrible ones into accidental killing machines. But, even if you stay on top of the gun meta and know which guns still hold the top spots, how you build them into your loadout can turn that great gun into an overpowered monster.

The Best Loadouts In Warzone Season 5 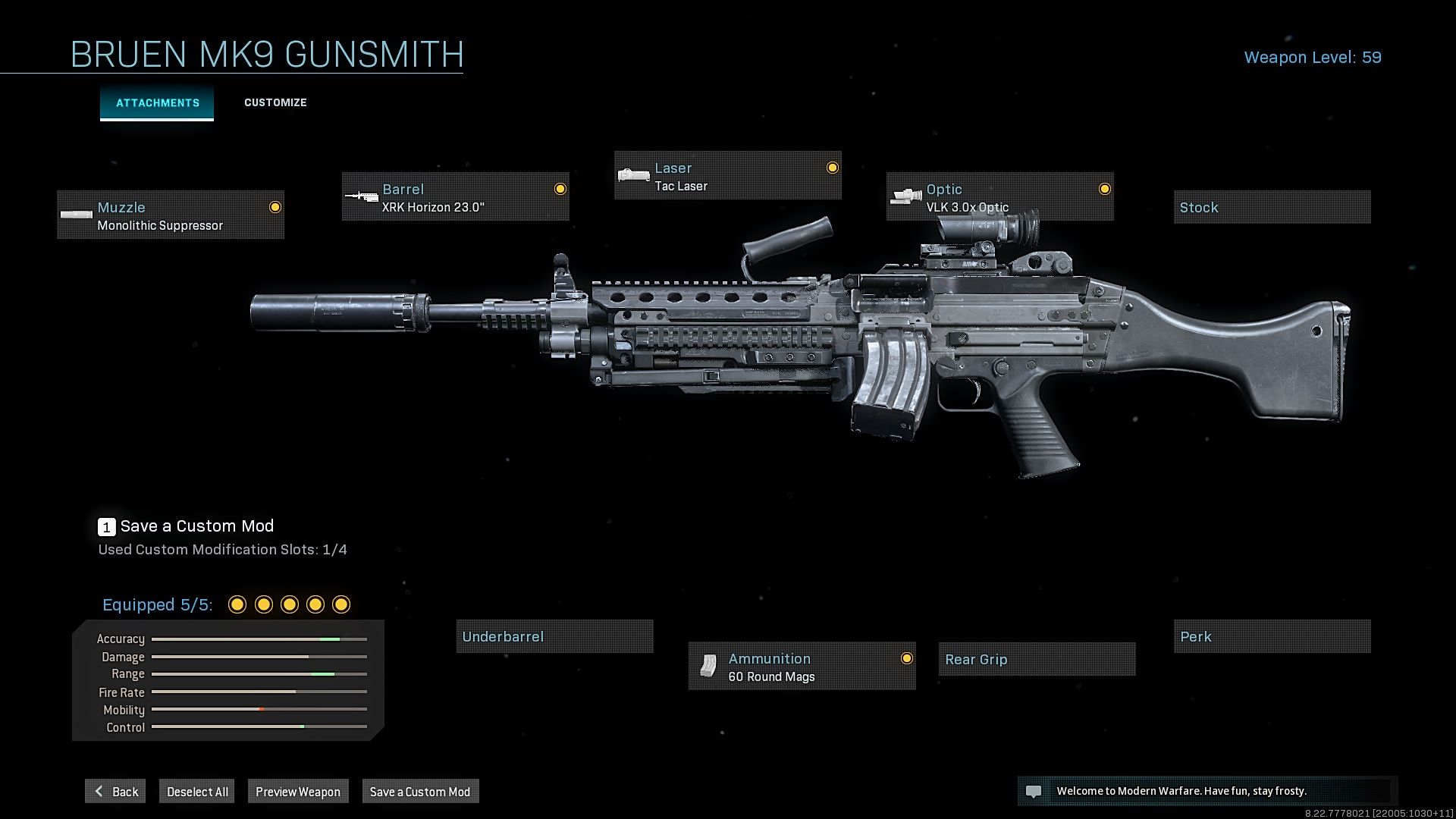 Of course there’s going to be a Bruen loadout on this list considering its one of the best guns currently in the game. Hopefully you’ve taken notice of this beast of an LMG and have gotten it leveled up a decent amount to unlock more attachments to really let it shine.

For attachments, we go with the APX5 Holographic sights, the Monolithic Suppressor, XRK Summit 26.8″, 60 Round Mags, and Skeleton Stock. The suppressor and stock may take some time to get if you haven’t been using this gun regularly, unlocking at level 53 and 56 respectively. But the most important changes are the lowered magazine size and barrel to boost your movement, reload, and ADS speeds while also increasing the gun’s range.

As a backup, you can go one of two ways. The Bruen can hold its own in the close range, so a sniper like the HDR is viable, but if you would rather keep engagements in the mid to short range, an MP5 will do the trick in those close encounters.

While there is an argument to be made between the Kilo and Grau, there are some areas where the Kilo excels. It comes with a respectable time to kill, has incredibly low recoil, and is great in the mid range. This gun is only just starting to gain a lot of traction as one of the best in the game, so get your loadout ready to start dominating.

Your attachments for the Kilo should have the Monocle Relfext sight, Monolithic Suppressor, Singuard Arms 19.8″ Prowler, Commando Foregrip, and 100 Round Drums. The grip will help further control the gun, especially with all the extra rounds you can fire off. The scope makes tracking targets just a little easier. All that combined make this gun the top of the pile for mid range firefights.

A good complement to the Kilo would again fall between the HDR or MP7 to cover the far long ranges or super close range. 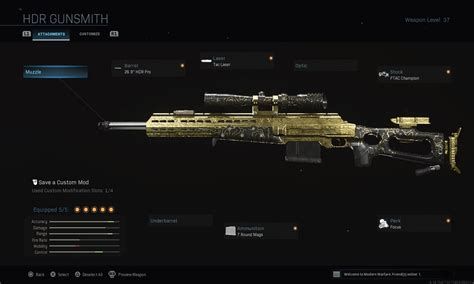 Again, some may prefer the AX-50, but with the right attachments the arguments against it become harder and harder to justify. If you haven’t fallen in love with the HDR yet, try it with this loadout and then see how hard it is to go back.

We start off by swapping out the optics for the VLK 3.0x Optic. Of course, the monolithic Suppressor, the 26.9″ HDR Pro, FTAC Champion, and Focus. The scope and suppressor will make hitting your targets at long range easier, which is the whole point of a sniper, much easier than the default scope. The stock won’t do much, but is a nice little added boost to increasing stability, but the HDR Pro Barrel is the real star here. This one attachment raises your damage, range, velocity, and dampens recoil all in one. If you just want to aim and shoot without having to think about bullet drop, run this loadout.

You’ll need something to cover you for when the fight inevitably creeps in closer, so a backup Oden or Grau are great choices to hold in reserve. 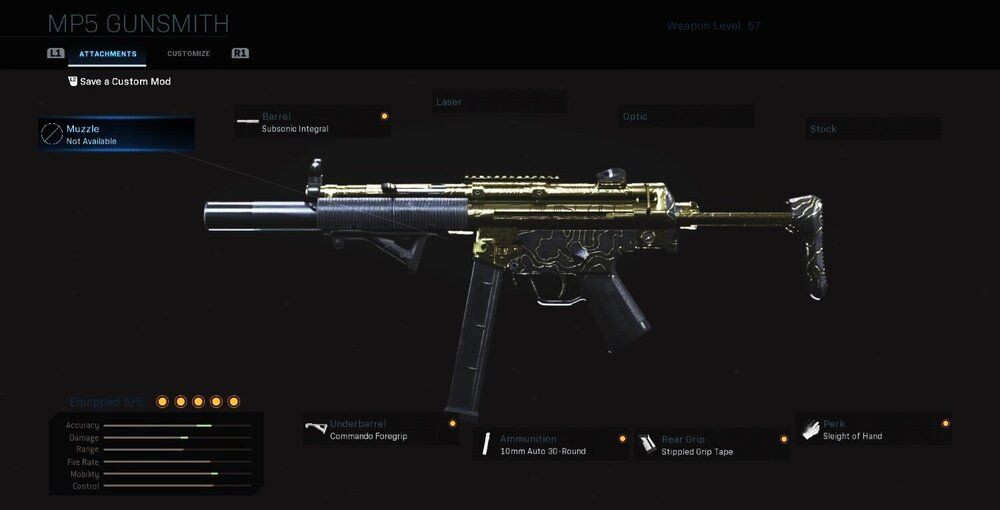 If you’re more of a close quarters kind of player, then the MP5 should be your best friend. It may not have the best recoil, but the time to kill and speed make it the best choice for those tight space gunfights.

As always, throw on your Monolithic Suppressor. From there we love the Commando Foregrip, 45 Round Mags, Tac Laser, and Sleight of Hand. Forget adding a barrel on this one. The suppressor will keep you off enemy radar, which is vital during short range fights, and the grip will help tighten up the spray, along with the laser helping the overall handling. The larger mags will help keep you in the fight a little longer before needing to reload, which we throw Sleight of Hand on to speed up.

Because its so limited to that short range, a nice Bruen is a great accompaniment to give you options for any other encounter ranges you might deal with. 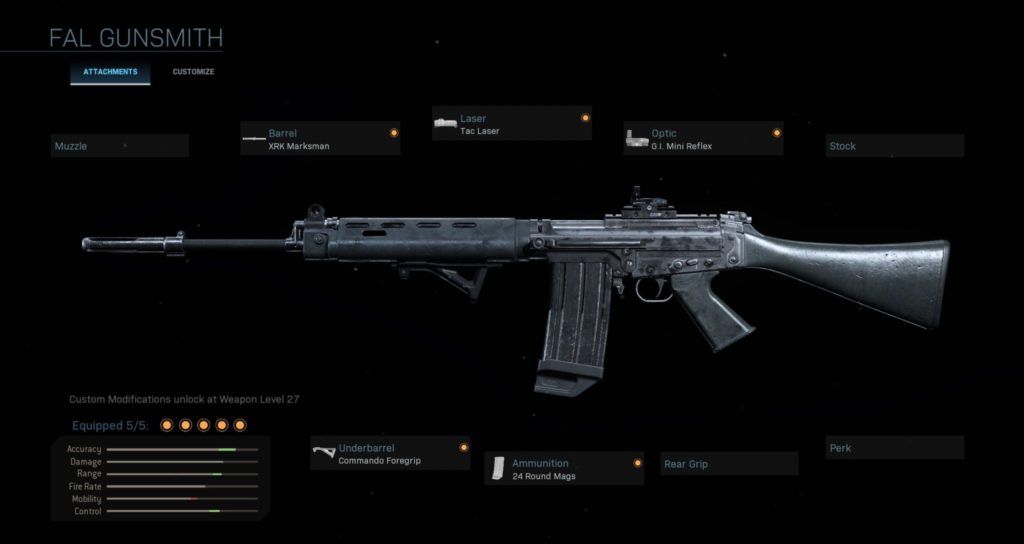 We round out our list of top loadouts with another amazing weapon that only gets better with the right attachments. This gun has gotten some extra attention since it was buffed, but here’s how you can truly make this gun shine.

It should go without saying at this point, but get that Monolithic Suppressor on ASAP. Beyond that, slap on the APX5 Holographic Sight, XRK Marksman, 24 Round Mags, and Tac Laser. The long barrel and suppressor help cover for the FAL’s slightly weak base damage range, and the extra magazine size helps capitalize on the high rate of fire. The scope is a nice choice for the ranges this gun is best at, while not compromising on your ADS speeds.

Again, your alternate weapon choice will depend on where you feel most comfortable with this gun. If you feel good at range, pick up an MP5, or go with the HDR if you want to keep the FAL for mid range.