CRACK! CLANG! SNAP! I cringe whenever I hear these sounds in a game with breakable weapons. Neglecting to keep an eye on a sword’s durability can lead to disaster, or at least a panicked moment of diving into a satchel to see if I have anything useful in reserve. Yes, I fully realize I am to blame when a weapon breaks in my hands – especially if the game allows me to monitor its degradation as I play. Yet even if I stay on top of the durability, I develop a strange connection to the game; I spend more time in menus, adopt a strange hoarder-like mentality, and take a conservative approach to using elite gear for fear of not having it when I really need it.

I understand why developers incorporate breakable weapons into games. If handled properly, weapon durability adds a survival element to an experience that can take us out of our comfort zones. In one conflict, I may have substantial heavily artillery that allows me to stand my ground and mow down dozens of zombies with ease. In the next encounter against a similarly sized zombie swarm, my depleted arsenal may force me to pick them off one by one with a pistol as I backpedal to safety. In these battles, I not only have to worry about ammo conservation, but also making sure my armament can hold up long enough to fire those rounds. Almost every shot counts.

If weapons don’t degrade, there’s a chance a player may rely too heavily on the same one. I’ve done this in many games, and while I don’t mind using a weapon I legitimately enjoy over and over again, I understand why developers would want players to see more of the game, which includes experimenting with the other weapons.

Watching a durability meter deplete adds intensity and excitement to battles, not to mention an internal debate over whether that weapon should continue being used in that instant. Thoughts along the lines of “just one more shot” sometimes backfire. As harrowing as these moments are, intensity and excitement are joined by just as much stress and frustration. When I’m in situations where I may potentially lose a valuable armament, I instinctually jump into a menu to see what else I can use. As soon as the weapon screen appears, the game moves from action to mundane resource management. It’s the equivalent of a record scratch. That battle, which should (and could) be epic, deflates as a result. Time in menus (which I’m going to try to brand as TiM) is an issue we need to focus on more, and I hope developers are looking for ways to reduce it.

The Legend of Zelda: Breath of the Wild was my runaway pick for Game of the Year in 2017. I loved the puzzles, world, story, and action, yet despised its approach to weapons. Every offensive tool Link wielded was apparently made of balsa wood or glass, breaking far too quickly. I didn’t let this singular frustration kill the experience for me, but it was a game-ending issue for other players, and not just a few of them. Even though Breath of the Wild is heralded as a huge success, it could have been an even bigger juggernaut if the weapons didn’t break. 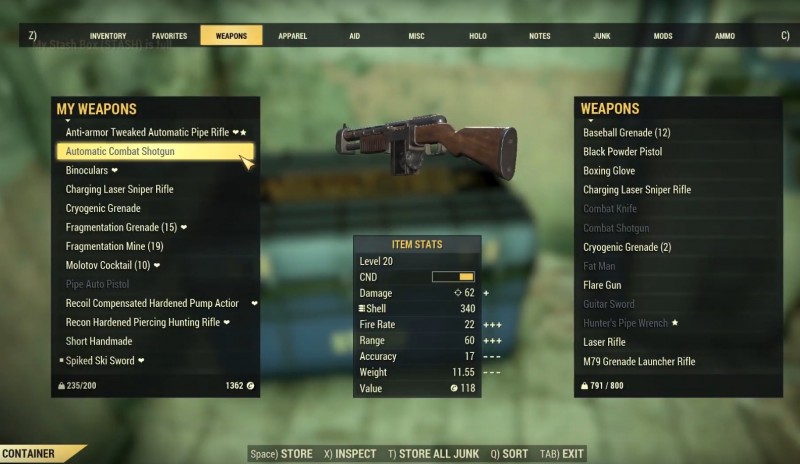 In every Fallout game from Bethesda, the biggest battle for me isn’t against a super mutant or any creature kissed by radiation – it’s being over-encumbered. Your character ends up being a pack mule, stuffed to the hilt with weapons, armors, and items aplenty. I carry roughly 20 to 30 weapons with me at any given time. Why? Because they break, and I don’t want to retreat to a workbench every hour to fix them. I carry a surplus knowing that I’ll have to swap them out often. I even take duplicates of my favorite weapons with me. I love that I’m forced to change weapons often in these games, but how it’s handled is a little absurd, especially when Bethesda stresses survival realism with hunger and thirst. I need to drink water because I’m human, but I can also carry a U-Haul’s worth of stuff? It doesn’t make much sense.

I’m now playing through Fire Emblem: Three Houses, and I adore most of it. If I had to pinpoint one area of concern it would be the breakable weapons, which double as ticking time bombs. I haven’t had many issues with them yet (I’m in chapter three), but some of my combat strategies are altered by not wanting to use (and potentially break) a weapon. I call them ticking time bombs because you see how many uses you have left with a sword before you take your next turn. If you have five uses left entering a battle against six people, well, you see the dilemma that arises. Again, this is an instance of weapon durability adding a layer of strategy in an intense and meaningful way, but it’s also maddening since, at my point in the game, I can’t repair the weapons. The blacksmith who can perform this function doesn’t unlock until chapter five. Do I just let them break? My solution has been to just buy new weapons for my students. It’s a solid workaround, but this is again an instance of breakable weapons creating chaos for odd reasons. Why the blacksmith isn’t around from the outset of play is beyond me.

The big question that looms over every game with breakable weapons is this: Do they make the game better or hurt it? In most games I’ve played, I’d check both boxes. That isn’t a cop-out response – checking the latter box means that there always seems to be some kind of issue with their implementation. I can’t think of one game where it didn’t bother me in some way. Perhaps those experiences where I’m crafting weapons out of random junk with plenty of duct tape – like Metro or Dead Rising – get a bit of a pass, but they still deliver plenty of stress and frustration.

Again, I see the benefits breakable weapons bring, even though I believe developers can achieve similar results in other ways – like the narrative leading to different load outs, or enemies that demand more rounds or explosives. Heck, if the intent is to make me use different weapons, just shower me with new versions with higher damage output and different attributes. At the end of the day, I just hope developers take a hard look at the pros and cons of breakable weapons and search for ways to innovate their approaches. If the solutions lead to aggravation or a compromised vision, what value do they really have?