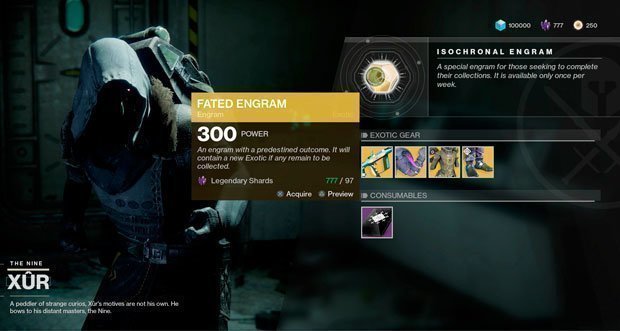 Xur will also have a new ‘Invitations of the Nine’ quest in his Exotic inventory.

The new quest item was introduced earlier this month (more info on that further down), but don’t worry if you missed out, Bungie confirmed last week that it doesn’t matter if you missed out on delving deeper into the story of the Nine.

Complete the first invitation to discover the backstory of the Drifter and his ties to the mysterious Nine. Everyone who accepted the first invitation last Friday will have a new experience this week. If you missed it last week, don’t worry. You can pick it up this Friday. There won’t be a cutscene every week, but that definitely wasn’t the last one you’ll see.

If you’re looking for the mysterious tentacle-faced Destiny 2: Forsaken merchant this week, you won’t find him just yet, so don’t bother checking the Destiny Reddit page for info.

Following the changes to the game many months back it now means that the Agent of Nine will now arrive at 10am PST, 1pm EST, 5pm GMT, 7pm CET.

When Xur does appear, it’ll be even harder to find him, due to some updates to the game following the launch of Destiny 2 Forsaken.

All this being said, it looks like Xur is still spawning in the exact same areas on Titan, Io, Nessus and the European Dead Zone. So it’s not too difficult, it just takes a few minutes more to locate him. Equally, he appears to still be spawning in the Tower when the flashpoint is on Mercury or Mars.

Stick with us as we reveal where Xur can be found this week and what he’s selling.

In the meantime, you can recap what Xur was selling last week, just below, as well as learn a little more about the Invitations of the Nine quests introduced last week. 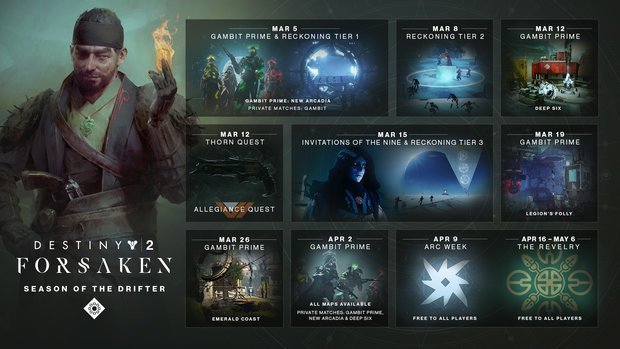 Last week Xur was selling the following stock, which Guardians could buy using their Legendary Shards:

Xur was also selling the Five of Swords (Nightfall Challenge Card) as well as the Fated Engram.

For those who don’t recall, the power level of the items sold by Xur scales to reflect your Guardians power level.

Do note, however, that Xur stopped selling these items earlier this week on Tuesday when the Destiny 2 Reset removed Xur from the game.

Invitations of the Nine