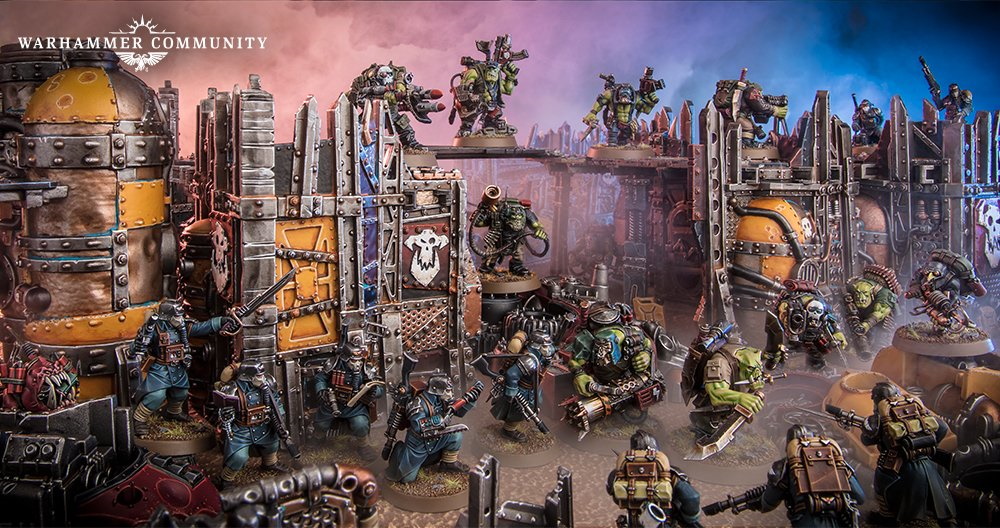 GameCentral takes a look at the new two-player tabletop game that is now the most accessible and enjoyable way to get into Warhammer 40,000.

Always had a passion for Space Marines but been put off playing Warhammer 40,000 because of the cost, size of the armies, and complexity of the rules? Well, Games Workshop has released a makeover of the tabletop skirmish game Kill Team, and with more personalised characters and a shorter playtime it could be the perfect way to get into the grim dark future of Warhammer.

The Octarius sector is in trouble, entire armies are being extinguished overnight in apocalyptic battles, so it’s time to send in the kill teams to try and contain this new conflict involving species such as the Orks and Tyranids. Your strategy, and resulting defeat or victory, will have far-reaching consequences for the fate of the galaxy.

Originally launched in 2004, Warhammer 40,000 Kill Team: Octarius has been overdue a reboot and Games Workshop has done these Orks and Korps proud. Kill Team has, up until now, been a niche title and suffered from being a condensed pick ‘n’ mix version of the normal game rules but this new version is a far more compelling prospect for both new players and grizzled veterans.

Taking cues from games such as Corvus Belli’s Infinity, and other more recent miniatures games, Kill Team has now adopted the idea of players taking turns, one after the other, instead of stacking a bunch of actions before their opponent has a chance to respond.

Spec Ops, a narrative play mode which is also familiar from Infinity, allows players to evolve their team, individual characters or experience and bonuses while playing the campaign, which gives Kill Team a personalised feel and increased sense of engagement.

Kill Team is 40K on a much smaller scale, you just need a few minis and scenery to have a great 45-minute game. The back and forth gameplay is faster and more fun than before, since each unit has an APL (action point limit) similar to video games like XCOM, which determines whether you move, attack or perform some other action during a turn. Specific classes, such as specialists in melee (ninja grots) or explosives (exploding squigs) have their own unique actions, as do handy medics.

The kill teams themselves are highly customisable, crafted from elite teams of operators, and they can have a variety of different build options, so that no two are exactly alike. Models can carry different weapons depending on specialisations, including a mighty shovel or a flamethrower.

The game is organised into separate strategy and firefight phases, with the former generating one command point per turn, which can be used for unique Strategic Ploys, such as an Ork move that makes it impossible to miss. Alternatively, you can save the points for Tactical Ploys during the firefight phase, such as one for the Veteran Guardsman which brings an incapacitated trooper back into the game for an extra turn. The Firefight phase is where all the action happens, as you activate each of your operatives one by one, to carry out the mission objectives.

The box set which Games Workshop sent us is bundled with a dedicated rule book, which is what all prospective players have been hungry for a look at. This book contains all the rules needed for two factions: the Death Korps of Krieg, who look straight out of the Somme with a Deutsches Heer meets Blade Runner aesthetic; and the straight out of the scrapyard, green skin Ork Kommandos.

Up until now the only way to get Death Korps of Krieg models was at a premium price through Forgeworld so, these new plastic units make the game even more accessible and inclusive. Although, Games Workshop are bound to try and make more money from unique individual sculpts of these characters.

Be warned though, these aren’t ‘easy build’ push-fit miniatures and you’ll have a lot of gluing and painting ahead of you. The Kommando Orks are great though, especially for anyone that enjoyed playing Kommando Nob in Dawn Of War 2.

There are three ways of playing Kill Team: Open (friendly) matches; competitive Matched games; and Campaign mode, aka Spec Ops. Spec Ops is where the real innovation has taken place, making the game more accessible and story orientated. Naming and personalising your characters may be fun at first, but (again, like XCOM) you’ll feel a real sense of loss as Guttsplitter Cyberstonk or Nodugz Catlicker gets fragged while trying to hack through a firewall.

Playing Spec Ops involves multi-stage missions that require you to fulfil special conditions and by completing each step you’ll earn a commendation, leading to greater rewards and racking up achievements for your kill team.

There’s plenty of missions included, with a variety and diversity of gameplay to keep you playing and match your preferred play style, including securing caches of ancient artefacts and head-to-head battles for disputed territory. Whether you play stealth or melee, or even just instagib enemies across the board with a lasgun, you’ll find a scenario that’s suited to you.

There’s lots of terrain included in the box and it’s humorous and impressive in detail, with its own dedicated rules. You might spot a wrecked Ork flyer or mashed up Imperial tractor, covered in fairy lights, acting as a support beam. The build quality and sculpt of the terrain and miniatures is impressive, making this box set a steal at around £125. For that you’ll also get some dice, assembly instructions, and some colour decals to add to your (hopefully soon to be) painted minis.

There’s been some negativity in the Warhammer community lately, with a clampdown on fan art by Games Workshop, ahead of the release of Warhammer+ (the dedicated animated content channel). So this imposing box set, and the guarantee that there’s enough copies to go around, should help to repair fan relations. With a promise of ongoing support and upcoming expansions, Kill Team is set to be an important milestone for the future of Warhammer 40,000.