San Francisco residents awoke on Wednesday to an orange sky, like something out of the apocalypse. People shared images on social media of a sky turned hazy orange by smoke coming in from major wildfires throughout the region. Aclima, which measures air on a “hyperlocal” level with pollution sensors on cars, had an explanation for the phenomenon.

The orange sky over the Bay Area didn’t appear to match the hourly recommendations about pollution levels on the Bay Area Air Quality Management District’s website, which generally showed healthy or moderate air pollution levels, except in the morning over Oakland and San Francisco, where air levels were shown to be unhealthy.

But the mismatch between the smoky haze and the stats from sensors made sense to Aclima chief scientist Melissa Lunden, who spoke with VentureBeat in an interview. She said an inversion layer suspends the polluted, smoky air at least a couple of thousand feet in the air and keeps it from descending to the ground level where we breathe.

“It’s like a layer cake where the air doesn’t mix,” Lunden said. “The smoke that is here today has been transported from a long way away, as far as Oregon.”

I saw a lot of people posting images of the orange sky on social media, followed by suggestions that they should leave the region to avoid breathing the air. But many were puzzled, like I was, by readings from the sensors telling us the air was “moderate” or “healthy.” 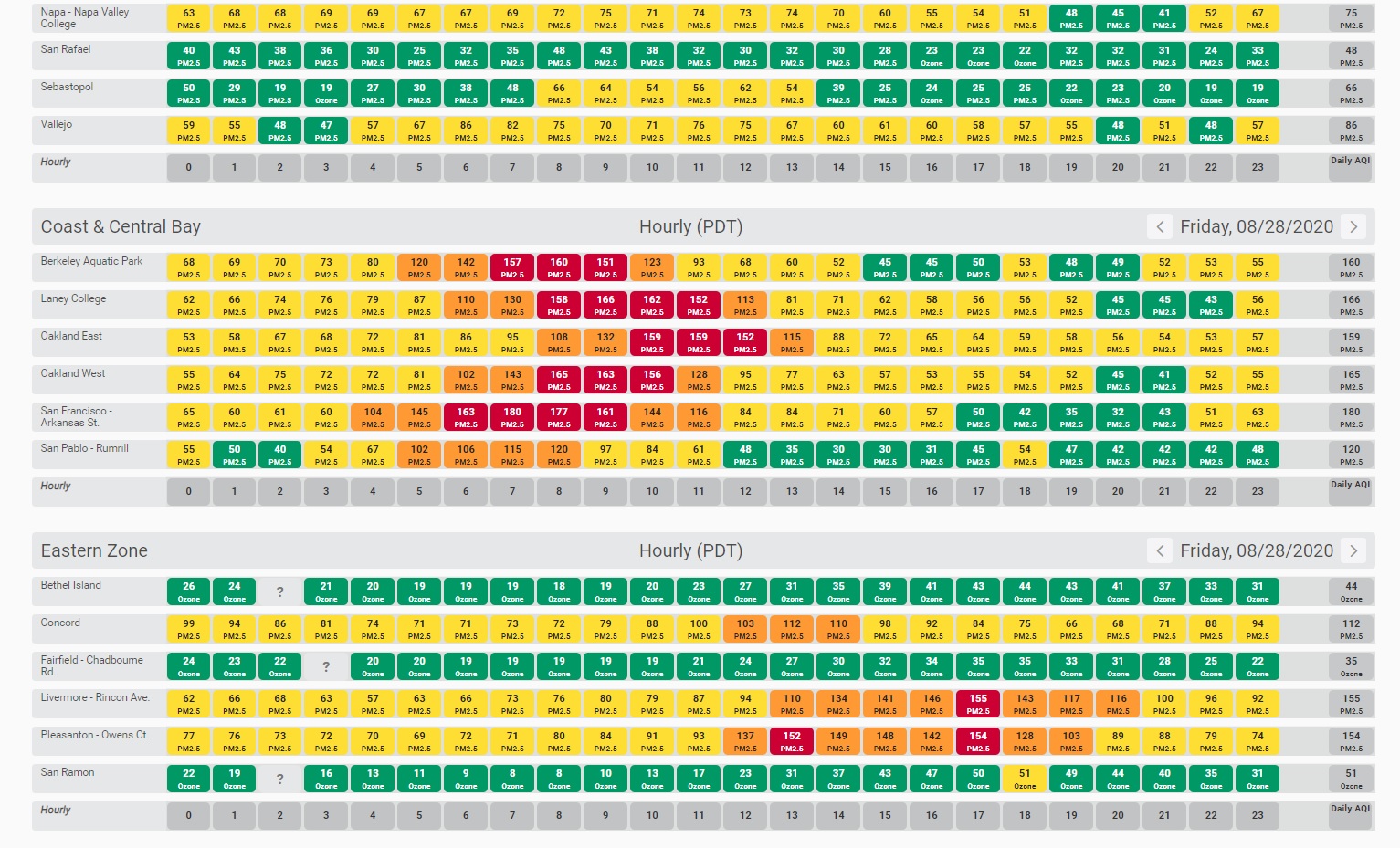 Above: With the exception of a few hours in the morning in Oakland and San Francisco, Wednesday’s skies weren’t that polluted.

The sensors that measure air quality throughout the Bay Area are on the ground, at the level we breathe. There aren’t that many of these fixed sensors in the region, which is why Aclima sends drivers in Google Streetview electric cars around the region, measuring pollution with sensors attached to the cars. The company gathers a massive amount of data compared to other pollution measurement collectors through this mobile method. Aclima previously used this data to assess the pandemic’s effect on car travel and pollution levels in San Diego. But Aclima’s data isn’t processed in real time yet.

When the fires started in the region on August 16, after a freak storm with 11,000 lightning strikes, they spread fast. Four major fires still encircle the Bay Area, and this week a new blaze started near Chico, California that kicked more ash into the air. Aclima scientists have continued to examine the impact of these lightning complex fires on air quality.

Lunden repeated what she told me in an earlier interview. On summer evenings, an inversion layer of cool marine air blows in from the ocean and is trapped beneath a layer of warmer air. The marine layer is stable, meaning there is no exchange of air between this lower level and the air above it.

Above: Fires burning in California have created a ring of smoke around the Bay Area.

As the sun comes out and heats the ground, the height of this layer increases, and there is more mixing of air both far above and near ground level. The difference in atmospheric pressure between the cool Pacific and the heating inland regions results in an onshore wind that starts to build mid-morning to a strong flow by late afternoon. As the sun sets, the evening inversion layer forms again.

Emissions from the fires are often found at higher elevations in the hills, and smoke rises high into the atmosphere. In the evening, this smoky layer is trapped above the inversion layer and does not descend to the ground level. As this boundary layer grows throughout the morning, however, the smoke that has been held high above the ground mixes into the layer, and concentrations on the ground increase. Direct smoke emissions are also more likely to mix into this layer during the day. As the winds pick up, this smoky air is blown out of the Bay Area toward the east. And when the sun goes down, the reformation of the evening inversion layer results in clearer air being closer to the ground and where we breathe.

How healthy the air is depends on where you are. If you are near a fire, the smoky air may make its way into the lower region of air and pollute your breathing air, especially if you can see ash. 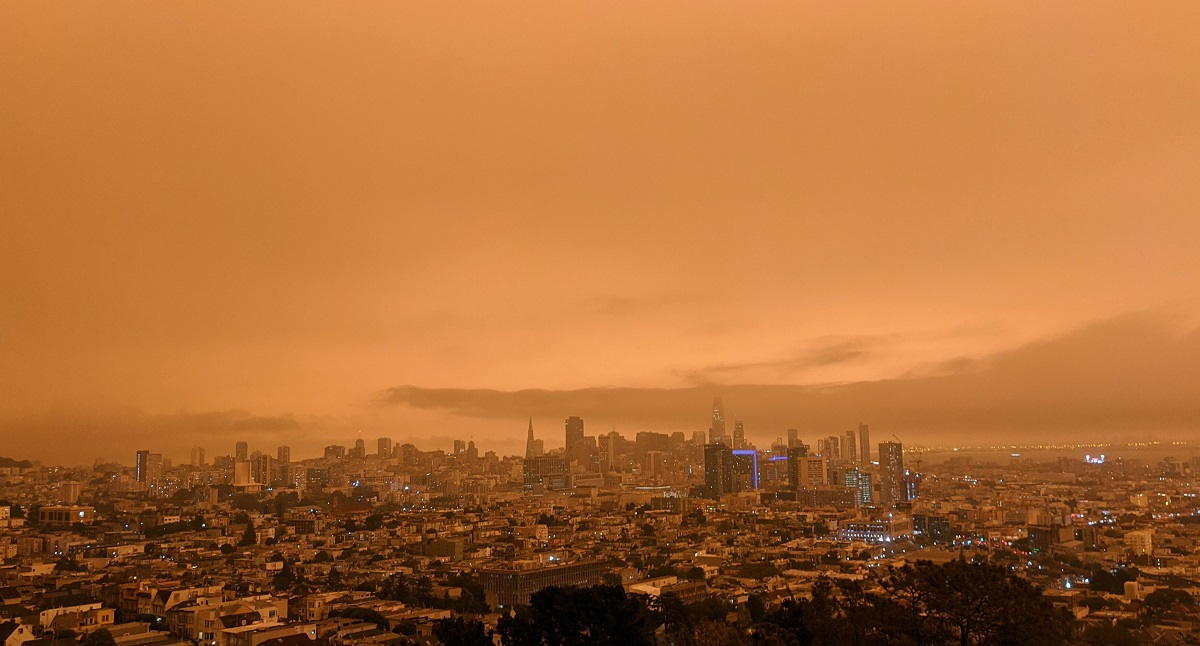 Above: The Bay Area air is smoky.

It’s important to note that these observed patterns hold true for what happened, but if the winds change then the patterns will too. When in doubt, a good resource for air quality is here. You can check the health level of the air by zip code using Air Now, but you may not be able to entirely trust that estimate. That’s because the data is based on the government’s regulatory sensors operating in stationary places, and that data is then extrapolated to cover a much larger region. It’s not based on the fine-grained data Aclima collects with its cars, but it’s pretty much the best measure available at the moment.

Lunden said you can’t judge whether the air is safe enough to take a walk based on what you smell.

“What you smell from a fire is like the organic olfactory compounds that get emitted, and that stuff is pretty reactive in the atmosphere and disappears after some number of hours, but the smoke is still there,” Lunden said. “It just doesn’t smell like smoke anymore. It could still have pretty high concentrations.”

When the sunlight from the sun isn’t really getting to the surface of the planet, which is sort of what’s happening today, you don’t have much heat on the ground. The heat is not breaking the mixing layer up, and so the mixing layer persists, Lunden said. “We are fortunate in that the persistence of that mixing layer and its stability means that that smoke is not mixing down at ground level.”

She added, “When it comes to air quality, looks can be deceiving. Sometimes you can’t see it, and it’s there. In this case, we think we’re seeing it because it’s such a crazy day. But the fact is, what we’re seeing is smoke, and it’s not coming down. The charts are yellow. I can’t even imagine what concentration we would see if all of what we had on top of us right now actually mixed down to the ground level.”

Why is the sky orange? 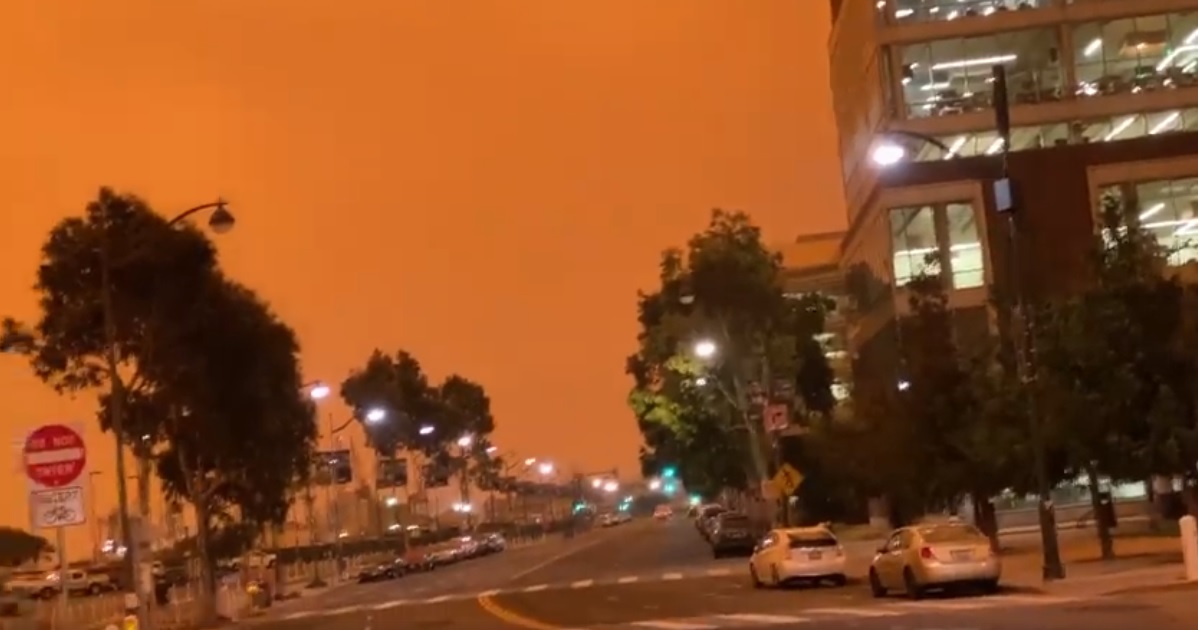 Above: The morning view in San Francisco.

What produces the orange light? When sunlight comes straight down at us at noon, it doesn’t have to pass through so many layers of clouds or smoke. But in the morning or at sunset, the sun’s rays are coming in at an angle and passing through a lot of smoke, which produces the orange effect as some of the light gets scattered and some penetrates.

“It is really very much like what you see at sunset,” Lunden said. “When you see clouds or sunsets in smoggy parts of the world, those sunsets are very orange.”

Smoke particles can scatter sunlight. Those particles are better at scattering the long wavelengths of red light. When the air is normal, blue light and its shorter wavelengths are much easier to scatter. 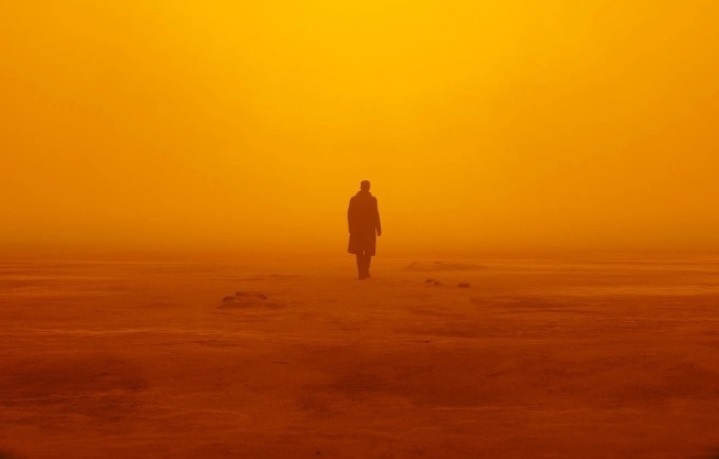 I saw a lot of people talk about the images of Arrakis from the upcoming film Dune or the polluted skies of Blade Runner 2049. Those are the skies of the apocalypse, or nuclear winter, a lot of people joked.

“Blade Runner 2049 had this orange air, and we know that desert air can be orange,” Lunden said. “If it’s windy and it’s kicking up sand in the air, it’s going to shift a blue sky to more orange.”

Will it come down on us?

When the skies above are so thick, less sunlight can get through, and that means the ground will be cooler than normal. And if the ground air is cooler, then the inversion will hold and the bad air won’t come down to us.

“This time of year, we tend to have the inversion layer form pretty frequently because of the nature of our environment, like being on the Pacific Ocean,” Lunden said.

The hot weather in the Bay Area over the last few days can counter that, as the heat can block cold weather coming in from the ocean and stop that cool air from making its way inland.

Are there conditions when the inversion layer collapses and the smoky air comes down? Yes, that can happen, especially if the colder air is not moving in from the ocean during the night. If there is warm air above the layer and warm air below, the air mixes together more, and the pollutants that are high in the air can come down. Today, that didn’t happen, as you can tell from the chart showing mostly green and yellow conditions for air quality. Let’s hope it stays that way.