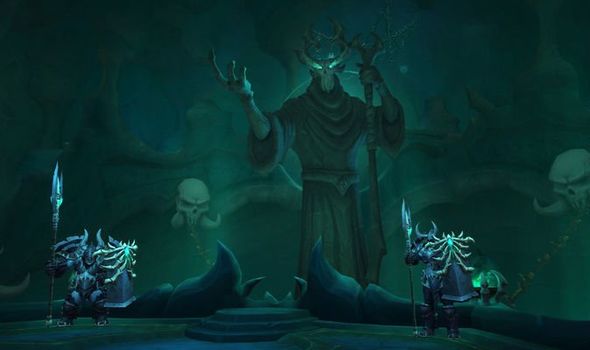 The official release date for the WoW Shadowlands pre-patch is finally here, although some gamers will be waiting a little longer than others.

For those in the United States, server maintenance will be kicking off today and will last several hours.

After everything has been completed, the new Shadowlands pre-patch is expected to be made available to download.

It should be noted that like other patches, the WoW Shadowlands pre-patch will not be available at the same time in the US and EU.

So while Shadowlands goes live in the US on Tuesday, October 13, players in the EU will have to wait an extra 24-hours.

As confirmed earlier this week by Blizzard, “The EU always patches the day after the US on a Wednesday so the EU patch day is on the 14th.

“The App should show you the time for maintenance, which will be correct for the region of the game you’re connecting to.”

WoW Shadowlands release time has been set for after server maintenance, which ends at 3pm PDT.

The big Shadowlands update is expected to be available after this time, with server downtime to start at 7am PDT, and last around eight hours.

Meanwhile the WoW pre-patch will be available in the EU on Wednesday, October 14, after server downtime finishes at 3pm CEST.

In Shadowlands, players will be able to quest through four new zones ruled by ancient and powerful Covenants.

Upon reaching the max level of 60, players will be able to join one of these Covenants as they continue to explore the Warcraft universe’s afterlife and the many mysteries and adventures that it holds.

Until the full expansion goes live, players will be able to explore everything changes with the release of the pre-patch.

For more information on what’s coming this week, you can find highlights from the pre-patch notes below:

Shortly after the pre-expansion launch, you’ll be called upon to defend Azeroth from an undead invasion as the Scourge sweep across the land. Players will embark on a quest to establish a foothold in Icecrown, where the barrier between Azeroth and the afterlife has been shattered, and prepare for the coming journey into the Shadowlands. This limited time pre-expansion event will only be available until the launch of Shadowlands, so make sure to log in to experience it and earn special rewards

Levels, items and stats have been adjusted to make reaching a new level feel more meaningful while simultaneously making the leveling experience faster than before. Characters at level 120 will become level 50 after the content update.

The character creation experience has been revitalized with a brand new user interface and many new character customization options to choose from. Some of the new options are selecting your eye color, new skin tones, new hairstyles and hair/fur colors.

All of these new options are available at Barber Shops throughout Azeroth, including the option for Druids to choose the appearance of their shapeshifting forms and the ability to swap genders. Now all customization is available in game at any time so the Appearance Change service will no longer be sold in the Shop.

Upon reaching level 10, new players will continue their journey through Battle for Azeroth and into Shadowlands.

Players who have already experienced Battle for Azeroth and reached level 50 on at least one character can now choose to level any subsequent characters in a different expansion using Timewalking Campaigns. This new feature allows content from locations like Northrend or Pandaria to scale to a player’s level, so they can adventure from level 10 all the way to 50 and experience the stories of these areas at their originally intended pacing. Visit Chromie near the embassies in Stormwind or Orgrimmar to select your expansion leveling experience. If you’d like to select a different expansion to level through, simply speak to Chromie again.

After creating your character and beginning your journey into World of Warcraft for the first time, you will enter the Newcomer Chat channel where you can chat with other new players and experienced players on the same faction who will be your guides as you level through the new starting zone – Exile’s Reach. New players and guides will be able to recognize one another in the chat channels and with icons above their characters’ heads that only they can see. Upon reaching level 20, new players will be prepared to continue their journey ahead on their own and will no longer have access to the Newcomer Chat.