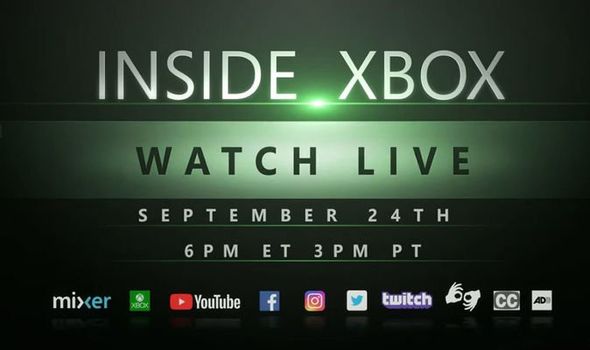 Microsoft is providing a big update this week with the return of the Inside Xbox Livestream event.

Announced just today, gamers will soon be getting an update on Project xCloud, the tech giant’s upcoming Xbox One game streaming service.

This is likely to be the big part of Microsoft’s Inside Xbox plans, which is scheduled to go live on September 24.

WHEN DOES INSIDE XBOX START THIS WEEK?

Inside Xbox returns on Tuesday, September 24 at 3 p.m. PT / 6 p.m. ET with an hour-long episode featuring all things Xbox.

For gamers in the UK, it will mean a late start, with Inside Xbox scheduled to begin at 11pm, BST.

Microsoft says they will be hosting a show that will be almost an hour-long and feature new gaming news and announcements.

Much of this will be covering things we already know about, including Project xCloud and the XO19 event coming later this year.

But there should also be some interesting updates regarding games, with Studio Wildcard’s Atlas set to be featured.

Atlas has proven a massive hit on PC but has been updated a lot since it was first launched and could find a new audience on console.

There has been no specific mention of new games being announced during the show beyond Atlas, but there’s certainly room for a few surprises.

The Project xCloud announcement is likely to contain a release date or beta period for the upcoming platform.

Microsoft is preparing to launch this year and we will hopefully hear more about their plans this week.

“We’ve got a look at the upcoming single-player sci-fi RPG The Outer Worlds, the latest on Project xCloud, an exclusive interview with Jon Bernthal on Tom Clancy’s Ghost Recon Breakpoint, the scoop on tickets for X019, coming to London on November 14, and you’re hearing it here first – Studio Wildcard’s Atlas is coming to Xbox and we’ll tell you everything you need to know,” a message from Microsoft reads.

“The episode will also feature DayZ, Hitman 2, Afterparty, Code Vein, Felix the Reaper, Children of Morta, the next round of Xbox Game Pass titles and more.

“Inside Xbox is also available with American Sign Language (ASL) for the hearing-impaired, Audio Descriptions for the visually-impaired, and is subtitled in Spanish, French and Brazilian Portuguese.”

It should be noted that the Atlas announcement only says coming to Xbox, leaving the door open to other platform announcements.

The Inside Xbox event is being held on the same day Sony is hosting its own State of Play stream.

This will be held hours before Inside Xbox and looks set to include big about The Last of Us Part 2.

However, it’s very unlikely we will hear anything about the PS5, Sony’s upcoming next-gen console.

And we see little from this Inside Xbox announcement to suggest Microsoft will offer anything on Xbox Scarlett.