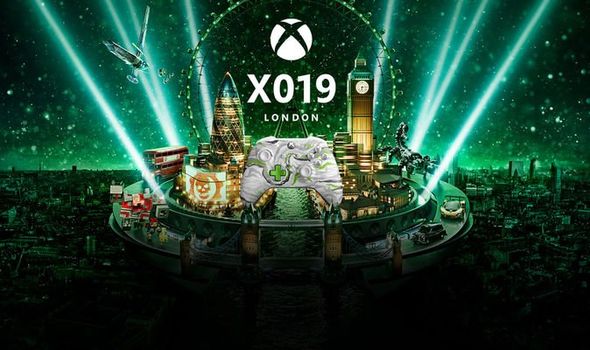 X019 is being hosted in London and looks set to be an exciting conference filled with Microsoft news.

A basic outline has already been given to fans, and there’s a good chance that more will be revealed regarding the Xbox Scarlett console.

The main next-gen rival to Sony’s PS5, Project Scarlett is still without an official console design and price tag.

But that could all change in the coming days and would certainly prove a big deal for Sony’s PS5 release plans.

Microsoft has provided a rundown of everything that will be talked about during the conference, which kicks off on November 14.

“Join us for X019 in London, the annual global celebration of all things Xbox,” a message from Microsoft explains.

“The event will be filled with news, first looks and surprises, and Xbox FanFest, all live-streamed and starting on Inside Xbox.

“Whether you’ve been with us for years, months, weeks, or you’re still considering joining our global community, this is a moment where all of us come together.”

The event is set to run until November 16 and looks set to include plenty of news being streamed via Twitch, Mixer and YouTube.

The tech giant has teased that there will be plenty of games news during the show and probably a few surprises thrown in.

Inside Xbox will kick off 8:00 p.m. (20:00) GMT and will be the stream which will include the most significant news.

So can we expect an Xbox Scarlett update during X019? We would bet that something will be shared.

We’re currently still missing some big information on the new console, including what it looks like and how much it will cost.

Revealing just one of these factors would be huge and would provide something that Sony PS5 would need to match.

There are rumours that Sony will be unveiling their PS5 consoles to fans in February 2020, during their own event.

This would give Microsoft the chance to provide their answers and visions for next-gen gaming first.

But unfortunately, even if it would make sense to announce big news about Xbox Scarlett, that doesn’t mean it will happen.

Alternately, Microsoft could use X019 to push their Project xCloud streaming service further, perhaps with news on its final release.

And without a date, new Xbox game projects will be announced at some point, even if the number is small. There’s a chance that more Xbox Scarlett games will be revealed during XO19 that have been kept secret until this point.

Microsoft has made a number of studio acquisitions, and there are still projects that are rumoured to be in development.

Is there a chance that the reported Fable 4 project will be announced? It could certainly prove to be a popular cross-gen title for everyone to enjoy.

“At X019 we will have a special edition of Inside Xbox, featuring world premiere news, reveals and announcements, all in front of a live Xbox FanFest audience,” Microsoft teased earlier this year.

“As usual we’ll broadcast all the action live on Mixer and our Xbox social media channels.

“Inside Xbox will take place on the evening of Thursday, November 14. If you would like to be part of the live Xbox FanFest audience for the show you should aim to get tickets for the Thursday evening session.”