“You’ve activated my Trap card!” is a phrase every fan of the Yu-Gi-Oh! anime has uttered at least once. One of the three major types of cards in the game, Trap cards are meant to protect a player’s Monsters (and/or their Life Points) during their opponent’s turn, allowing the game to have a bit of interaction during both player’s rounds.

For various reasons, Trap cards aren’t quite as useful to competitive Yu-Gi-Oh! as they once were, but that doesn’t mean there weren’t some scary ones that existed at one point or another. For this list, we’re going to be looking at the most powerful Trap cards ever created.

Updated October 13th, 2020 by Johnny Garcia: Yu-Gi-Oh! has been picking up steam as of late, with Remote Dueling really taking off and getting more official support. This allows players to Duel through the use of webcams from anywhere in the world. There has been more to do with the game than ever before, with not just Remote Dueling but Duel Links gaining tons of steam. Multiple sets featuring incredibly powerful cards have been released, such as Duel Overload, Rise of the Duelist, and multiple Structure Decks.

15 There Can Be Only One 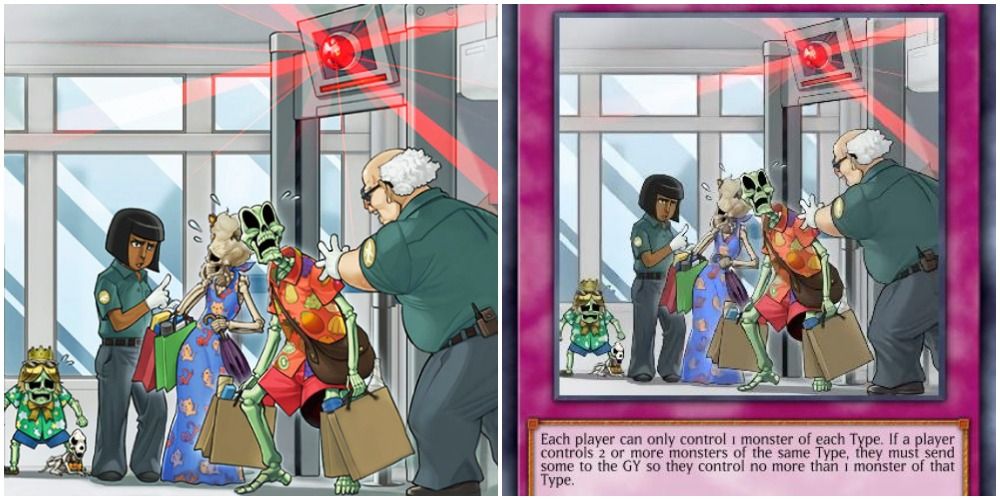 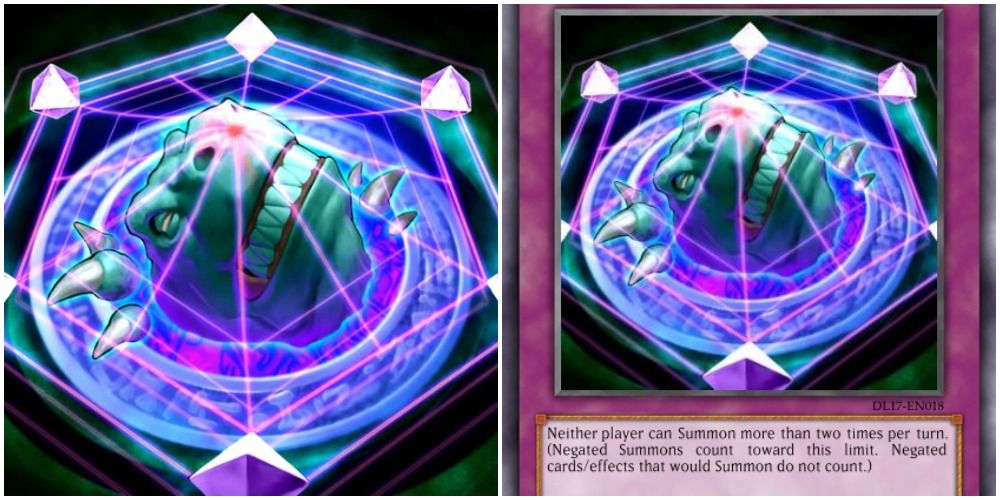 When it comes to Trap cards, Floodgates are generally among the best. “Summon Limit” is a Continous Trap card that’s one of the best Floodgates in all of Yu-Gi-Oh! What “Summon Limit” does is prevent each player from being able to Summon more than two times per turn.

This limit also includes negated Summons, which is enough to completely shut down an opponent’s turn. While it affects its user as well, as with all Floodgates, “Summon Limit” is activated after its user has already set up their Field so it truly only affects the opponent. 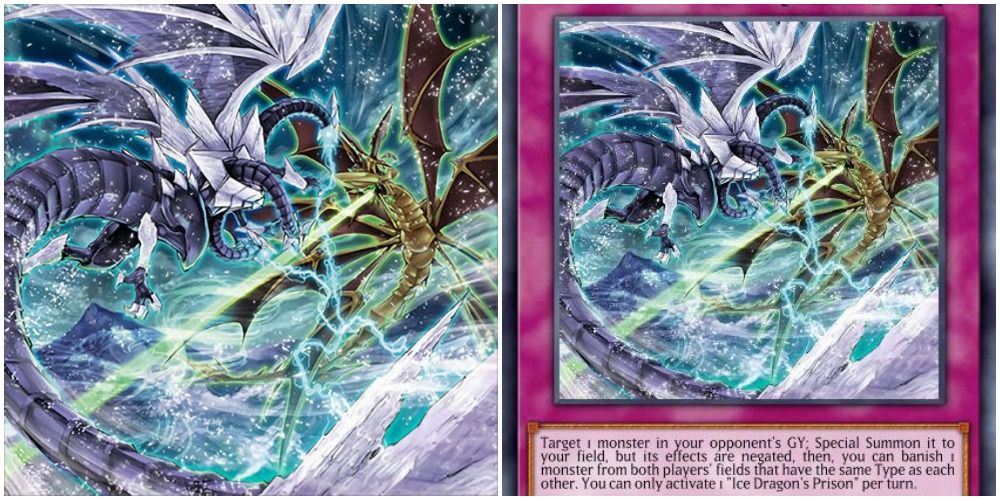 One of the most recent Trap cards released in the Rise of the Duelist Set, “Ice Dragon’s Prison” is one of the strongest forms of removal on a Trap card. It Targets a Monster in the opponent’s Graveyard and Special Summons it to its user Field with negated effects.

While this can be used to get a Monster with high stats on the Field, it can also be used as removal. If the opponent controls a Monster with the same Type as the one Summoned, then the user of “Ice Dragon’s Prison” can choose to Banish both those cards. This effect doesn’t Target or Destroy, which is what makes it so good. 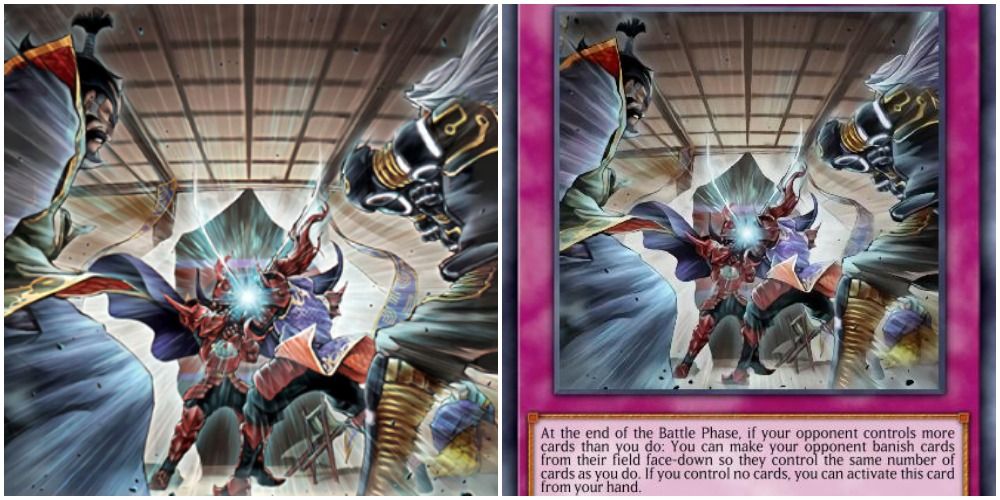 “Evenly Matched,” if it resolves, is the strongest form of removal in the entirety of Yu-Gi-Oh! It’s generally the first thing used in a turn, as if its user controls no cards, it can be activated from the Hand. “Evenly Matched” forces the opponent to Banish cards from their side of the Field face-down, until they control the same number of cards.

In most cases, “Evenly Matched” is the only card on its user’s Field, leaving the opponent with just one card. Banishing face-down is the best removal in the game, as cards in that position are generally considered to be gone for the rest of the Duel. 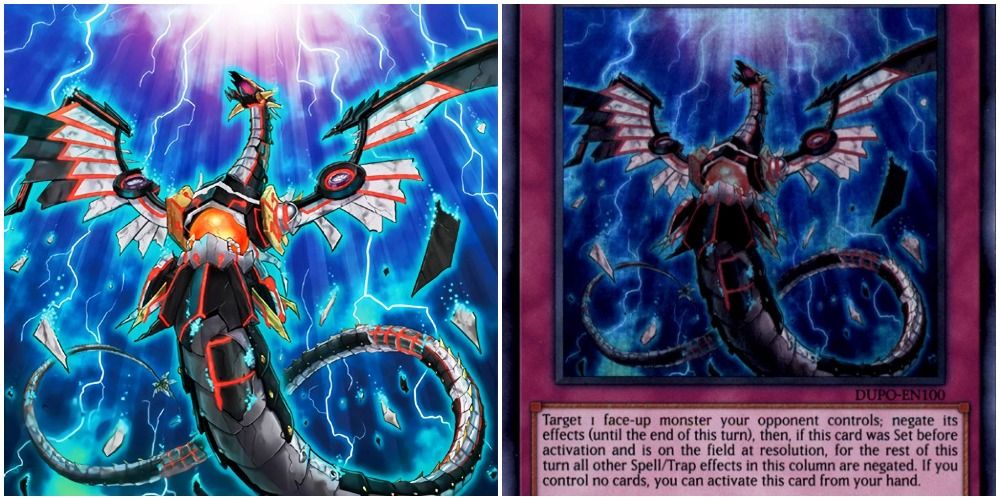 “Infinite Imerpanence” is perhaps the most played Trap card in the current meta. It’s incredibly powerful, and as soon as it was released it joined the ranks of the best Trap cards the game has ever seen.

While Trap cards have fallen out of favor, “Infinite Impermanence” is in many instances the only Trap card in a player’s deck. The ability to negate a Monster effect is great, especially since if its user controls no cards, they can activate it from the Hand. In addition, if it was Set when it was activated, all Spell and Trap cards in the same column are negated for the rest of the turn. 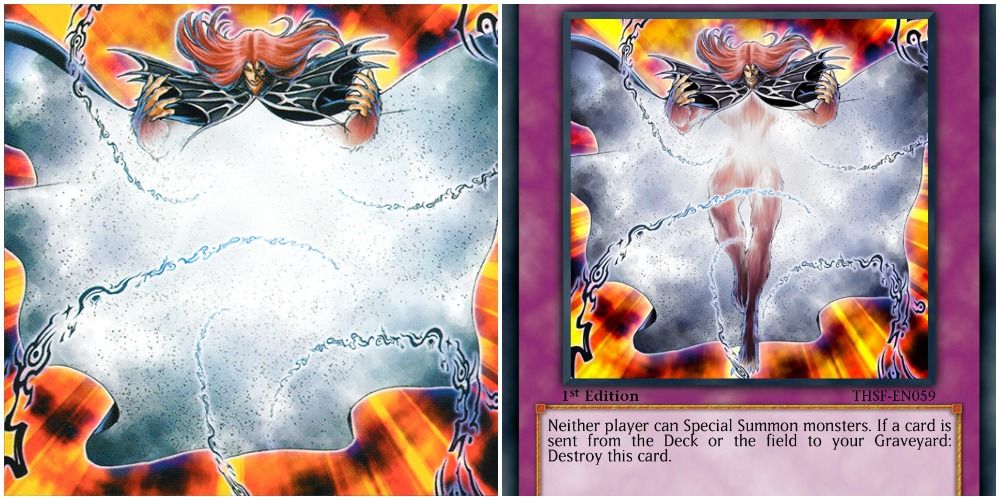 “Vanity’s Emptiness” was meant to be a card to help slow the game down. The idea is that once a player flipped something like this they could stop all the Special Summoning until something went to the Graveyard. Unfortunately, what’s impossible to account for are the Decks that are already good at incorporating something like this.

Like all Floodgate cards, what eventually happens is the faster, better Deck Special Summons all the Monsters they want, Set this card, then passes to their opponent. After their opponent draws, they flip this up, leaving them stuck against a full field of Monsters. It’s good they banned this. 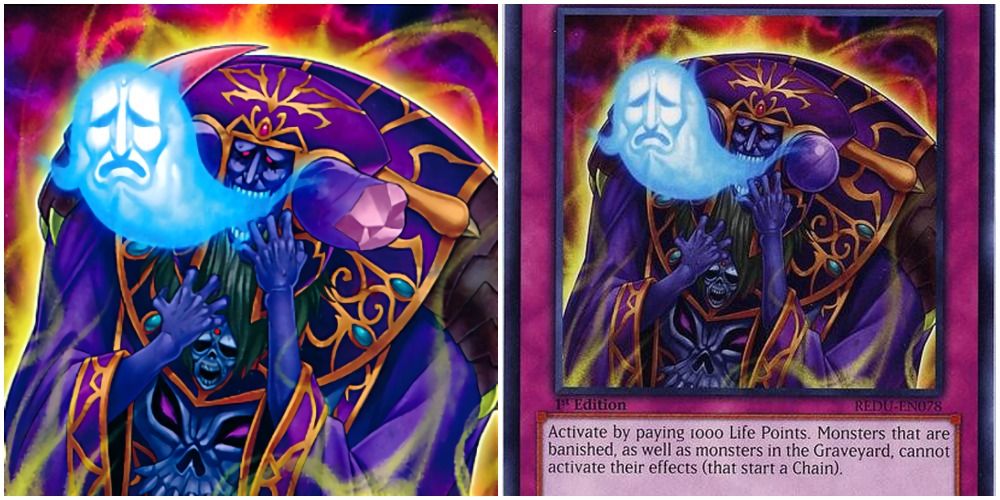 “Soul Drain” was a card that was considered so powerful, it was Limited on the banlist for years, having only recently gone back to three copies per Deck. Many Decks heavily rely on effects that activate in the Graveyard, which is what gave “Soul Drain” so much power.

1000 Life Points is a small cost to pay in order to completely shut down the opponent’s strategy and while being able to negate Banished Monster’s effects isn’t as useful it is a solid bonus to an already powerful effect. “Soul Drain” is a card that only gets better as time goes on, as more cards with Graveyard effects enter into the meta. 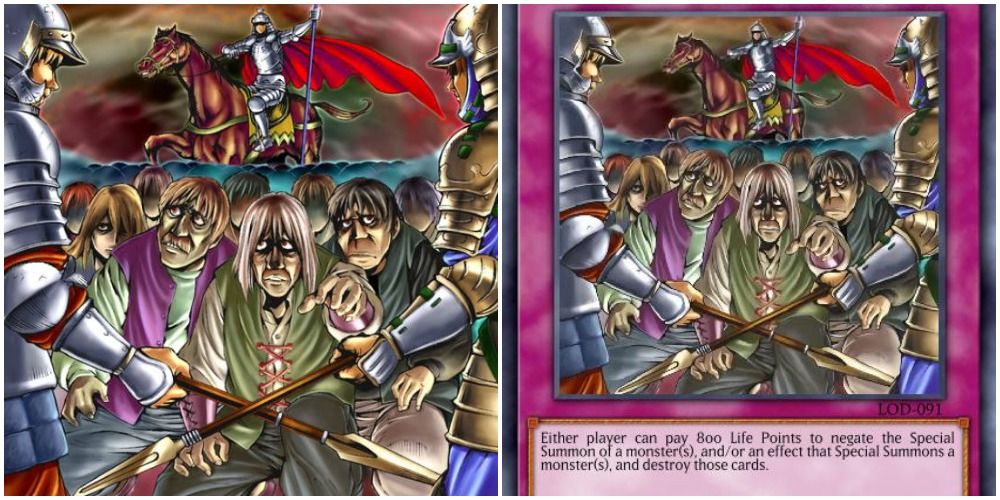 “Royal Oppression” is one of the most deceptive cards on this list. After all, it does say that both sides of the Field can use it whenever they like. Plus it comes with a hefty 800 life point cost to activate. But it inherently benefits the person with the most life points at the time of activation.

That in itself is bad enough, but there are plenty of Decks that can rely entirely on their Normal Summon. When that happens, since most decks run Monsters that are meant to be Special Summoned, it places the opponent’s back against the wall automatically. It is asking a lot to somehow have enough resources to force an opponent to not use this card. 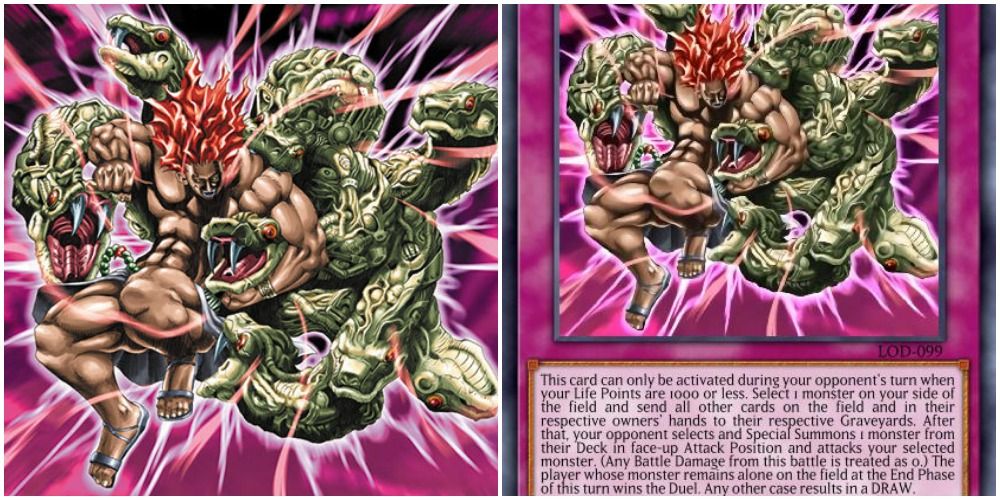 “Last Turn” was a part of a unique OTK that turned it into a real pain for anyone trying to play competitively. The trick to it was to flip the card while having a Monster like “Jowgen the Spiritualist” already on the Field. Every card is sent to the field on the opponent’s side of the Field, so there’s nothing they can do.

Once “Jowgen the Spiritualist” is on the field, the opponent can’t Special Summon Monsters due to its effect, making the opponent the automatic winner of the game. It leaves a terrible taste in the mouth of most players, but a win’s a win. Which is why this banned card is not coming back without a serious change. 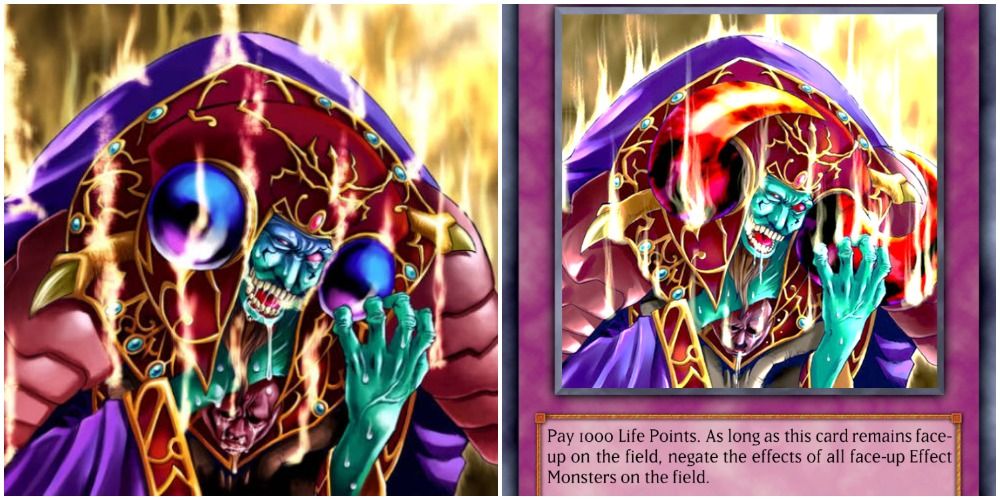 There are a lot of cards on this list that restrict players from doing something incredibly basic. For instance, “Royal Oppression” prevents special Summoning. They’re all great cards, but “Skill Drain” is both the best and most easily abused among them. Whereas most Decks are still somewhat limited themselves by trying to play around their Floodgate cards, Skill Drain doesn’t require any such thing.

A player can simply play a Deck designed to only Summon giant Beatstick Monsters that don’t do much else, while leaving their opponent stuck with smaller Monsters which have good effects, and suddenly the path to an easy win is there. 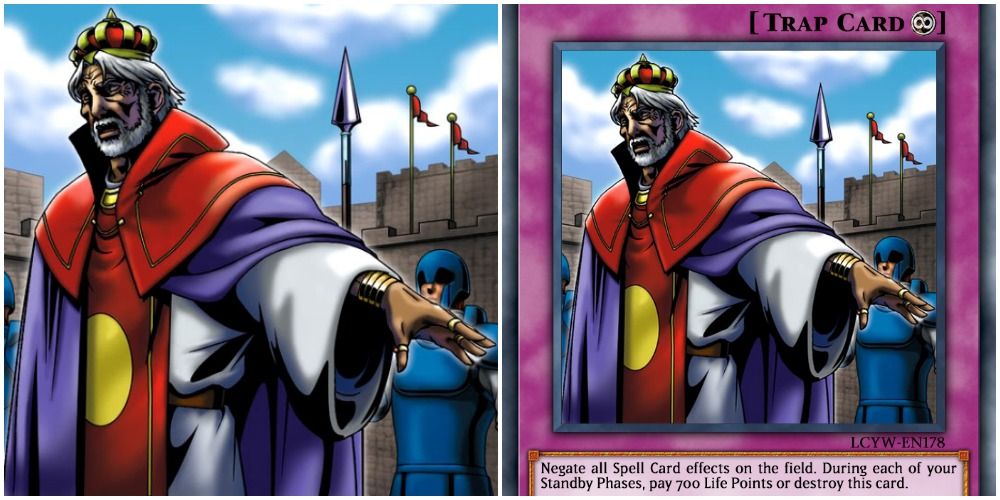 This card is the fault of Konami not realizing how the game was going to evolve down the line. It seems simple enough, negating all Spell cards on the Field, even having a cost of 700 Life Points to keep the card up or see it destroyed. The trouble is players using the card can build their Deck around it. It doesn’t take much to reduce the number of Spells in a Deck to get the maximum usage out of it.

It’s been brought back since it’s initial banning, but that’s only because now there are so many Monsters and Traps that can destroy cards. At the time, the best bet was another Spell card, which players were shut off from. 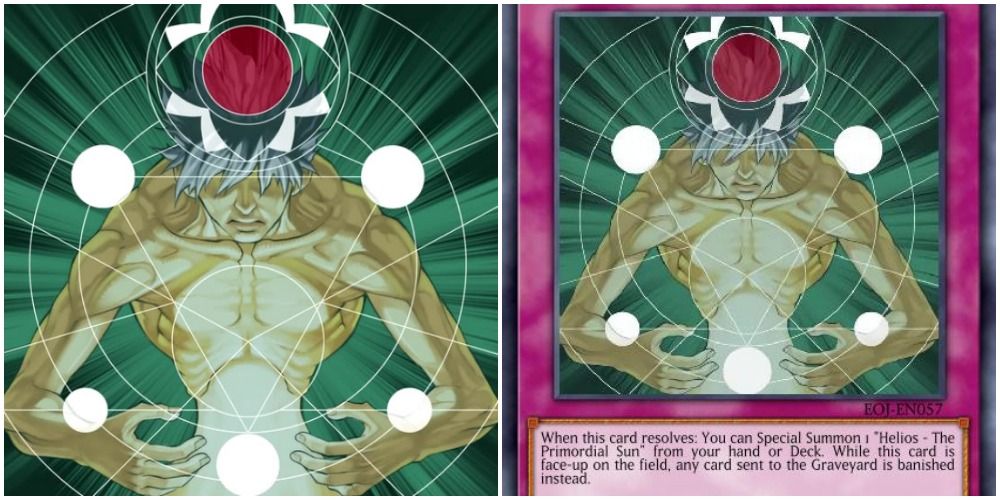 “Macro Cosmos” has been limited (meaning players can only have one copy in their Deck) for several years now. The card has a simple sounding effect: Any card played while it remains on the field is sent to the Banish Zone instead. This seems more annoying than anything else, but the game eventually evolved so the Graveyard is more like a superhero’s death; in other words, completely temporary.

“Macro Cosmos” being activated could obliterate a player’s turn, as Banished cards are impossible to retrieve from the Graveyard for most Decks. Its ability as an anti-meta card is what caused Konami to whack it. 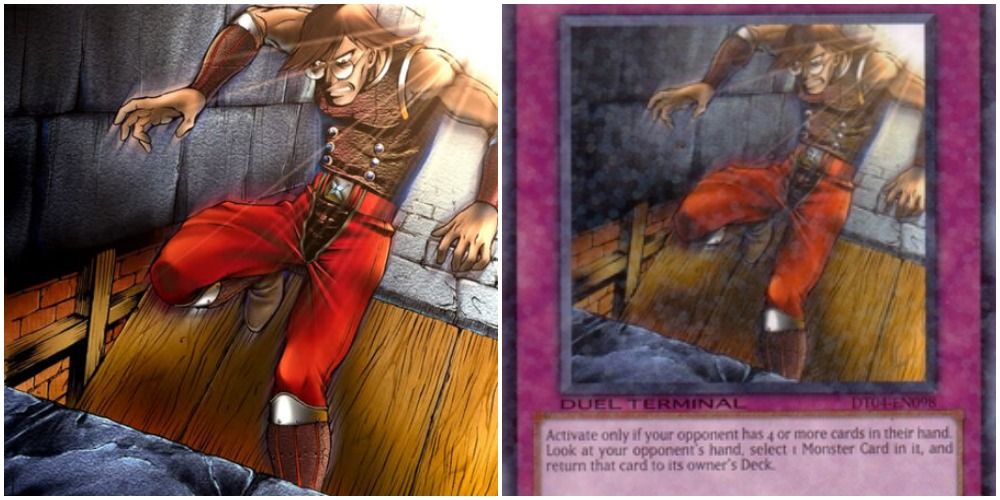 This is a card that was particularly dangerous during eras when players tended to have more cards in their Hand rather than on the field, meaning its the nightmare of slower formats. “Trap Dustshoot” seems simple enough, as it’s only asking the player to put back one card out of a Hand of four.

However, the fact that it specifies Monster cards means it could force the player to put back their only monster. Plus, it allows the opponent to see the player’s Hand, meaning they can strategize for what they can and can’t do.

2 Exchange Of The Spirit 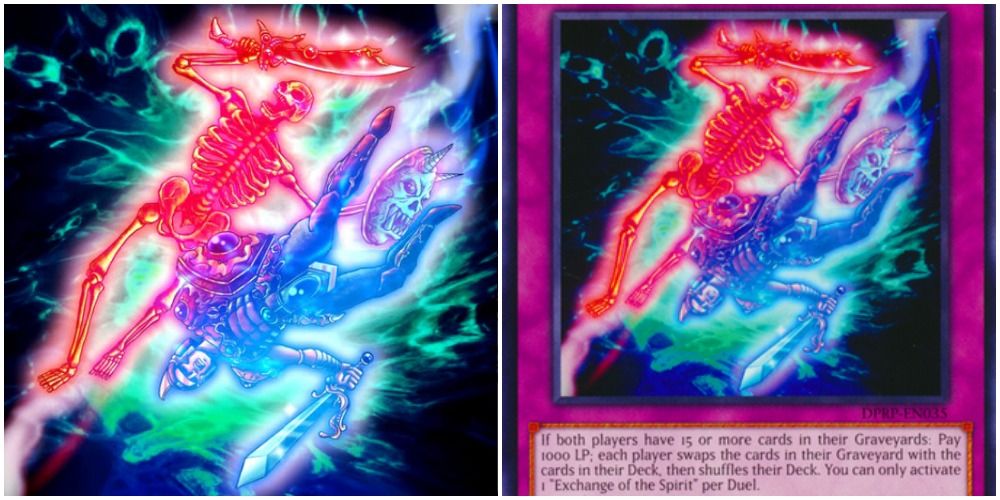 Though “Exchange of the Spirit” has more recently made a return to the world of Yu-Gi-Oh!, when it first became meta it was one of the most terrifying experiences a player could have. It was part of an FTK that involved using “Makyura the Destructor” to activate a Trap on their own turn without needing to Set it first.

The player would shove their entire Deck into their graveyard, then activate “Exchange of the Spirit” which caused them to swap it back and force the opponent to switch their empty Graveyard with their Deck. Since attempting to draw when you have no cards in the deck is an auto-loss, the player would then lose before they ever got to play the game. 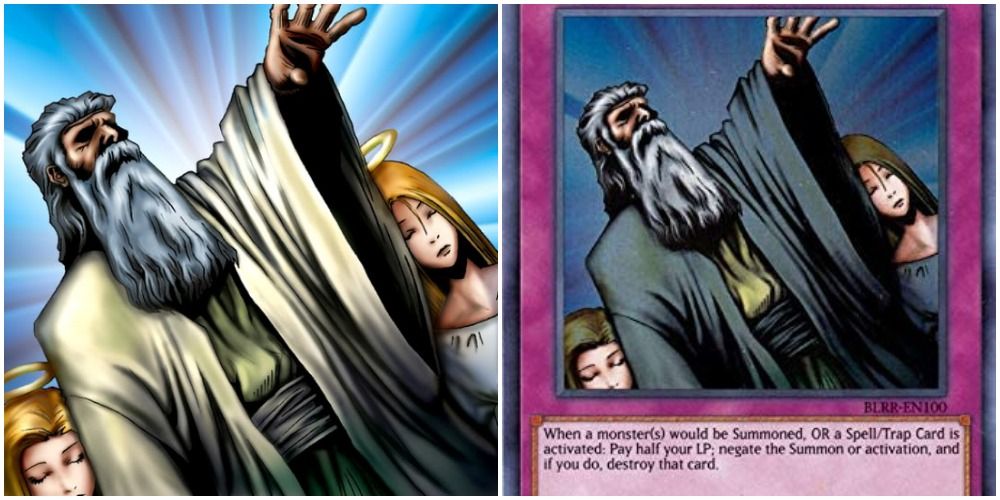 Until recently, this card could only be used as a single copy in any player’s legal Deck. It’s not hard to see why. “Solemn Judgment” is probably the most powerful Trap Konami has ever produced in the game. Often referred to as “God Says No” by players, “Solemn Judgment” is a Trap that stops any player from doing…well, literally anything.

It can stop a single Summon, Spell or Trap card activation – a player can literally negate whatever they want from you. Best part? The card says “pay half your Life Points”, which is something you can do as long as you have at least two Life Points. 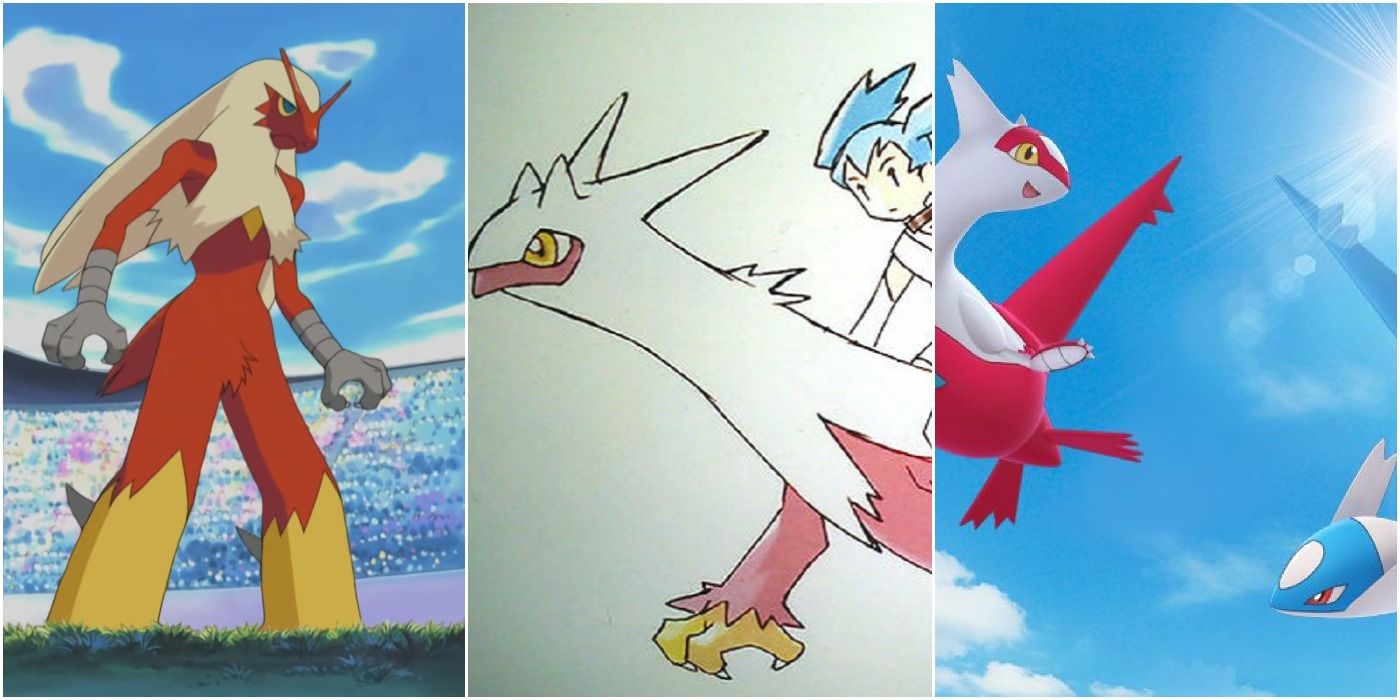