Board game designers Z-Man Games recently announced Carcassonne: Hunters & Gatherers, an updated version of the popular stand-alone Carcassone board game originally released in 2002. The game is currently available to preorder from the Asmodee webstore (or from your FLGS) for $39.99, and is scheduled to begin shipping this coming winter.

Carcassonne: Hunters & Gatherers (H&G) involves the same style and method of gameplay as the base Carcassone, but does so in a vibrant prehistoric Stone Age setting. Players control a tribe of hunter-gatherers, and must skillfully fish, hunt, and expand their territory in a constant search for new resources. The tile-placing tactics in H&G involve building and claiming “natural features like forests, rivers, lakes, and grasslands”, and includes other prehistoric elements such as menhirs, those Stonehenge standing stone constructions. 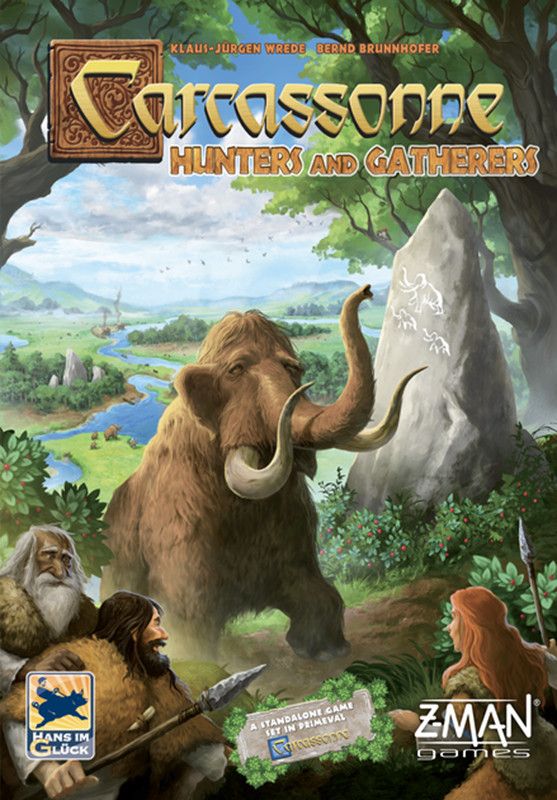 For example, your meeples act as your prehistoric tribe members who can be placed to claim grasslands, as normal. However, H&G grasslands have varying point values, dependent on both the number and types of animals shown on the tile, which include aurochs, deer, mammoths, and saber-toothed tigers. H&G tiles with rivers act the same as roads, but have points counted according to the number of fish on the river tile. Additionally, menhir tiles grant bonuses when completing features, and can allow you such things as an extra action, along with their usual bonus points.

Click over to the official announcement for the full details, and to peak into the 8-page PDF rulebook.