Now that Super Mario Maker 2 is out in the wild, the servers are starting to fill up with some outrageously cool levels. It’s pretty remarkable just how much there is in such a short span of time, and you may find yourself a bit overwhelmed when digging through the many options. Allow me to take that burden off your shoulders as I present ten decidedly cool fan-made levels that are worth checking out (in no particular order).

If you’d like to try any of these for yourself, all you have to do is enter the course ID listed on each. 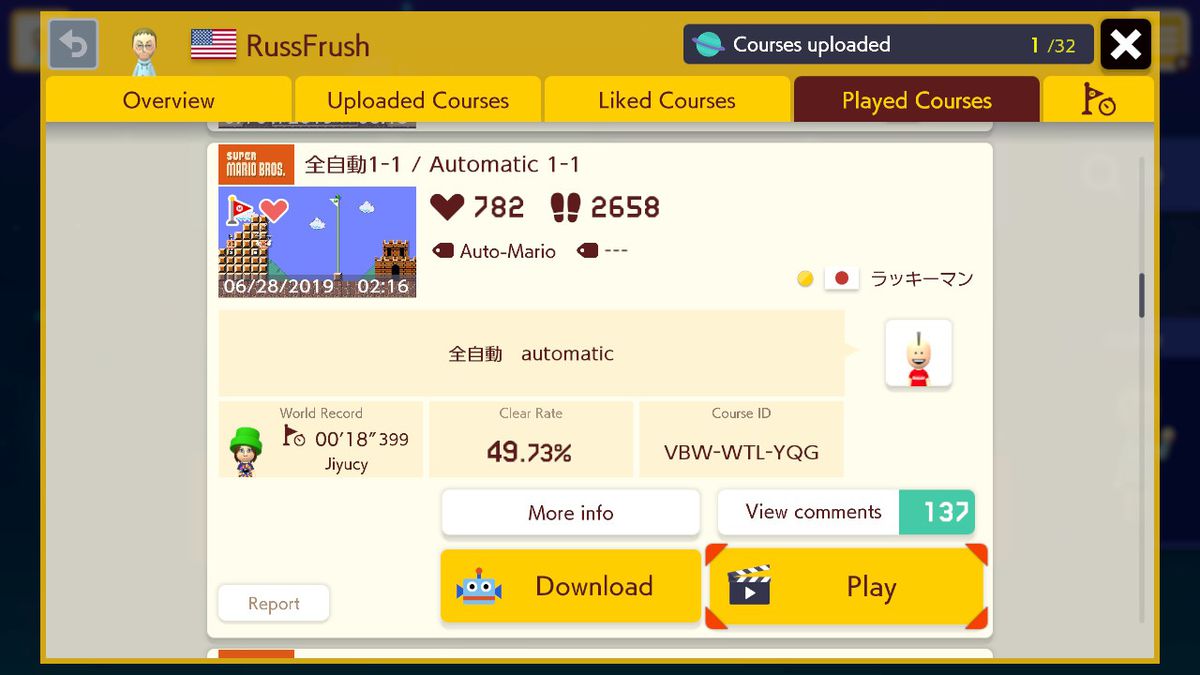 The Auto-Mario genre consists of levels that require little-to-no player input, and Automatic 1-1 is no different. What makes this one so unique is that it features the layout of the very first Super Mario Bros. level (1-1, natch). But thanks to some incredibly well-timed trampolines, Mario is able to complete the level without having to move a muscle. 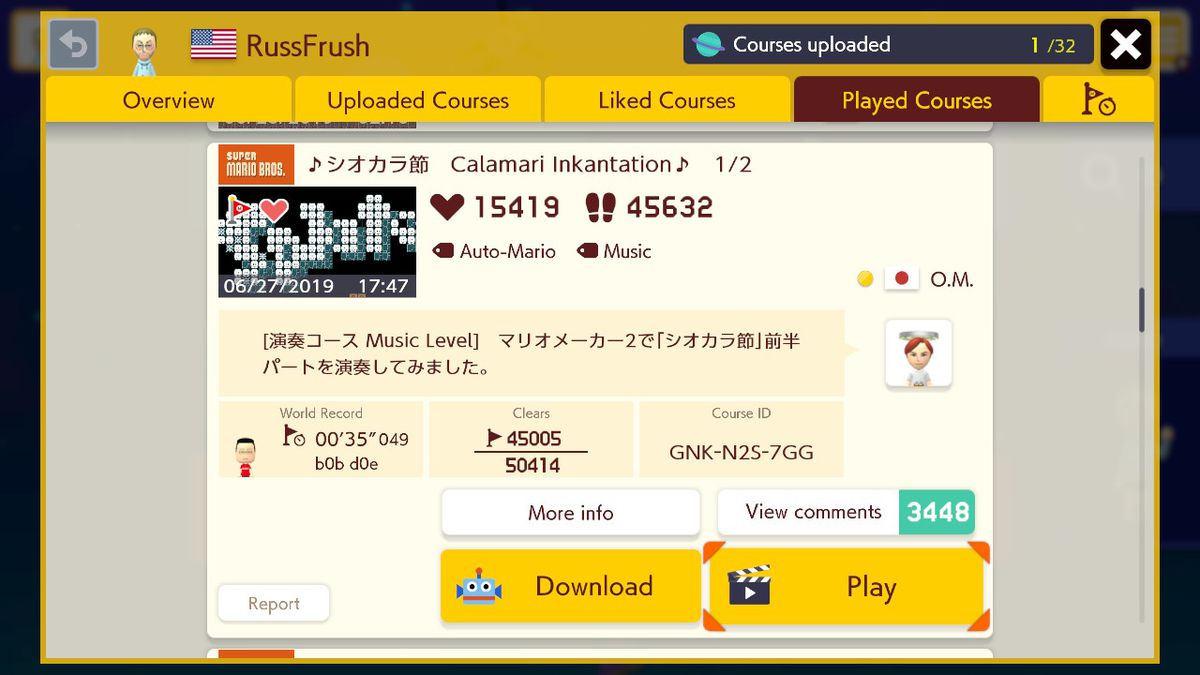 Another Auto-Mario level, this homage to Splatoon 2 utilizes musical blocks to recreate one of the more popular tracks from that game’s soundtrack. Effectively someone has made a music mixing board within a Super Mario level. Woah. There are a number of these musical creations, across all sorts of genres, but this is one of our favorites. 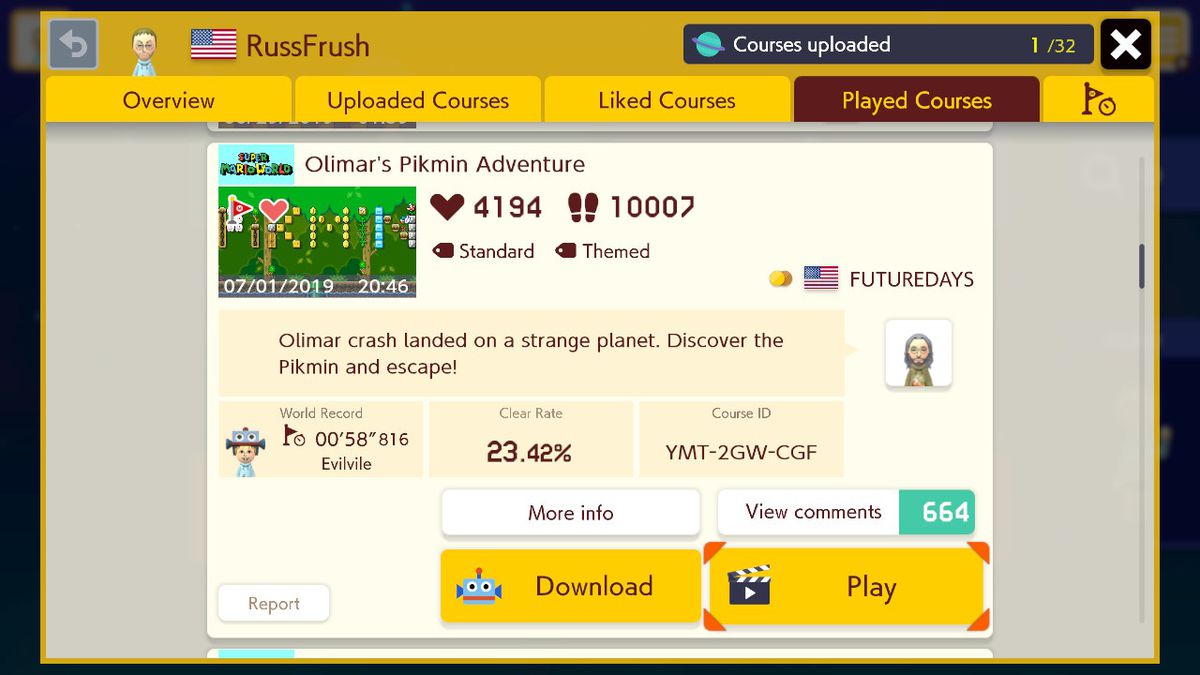 Speaking of homages, Olimar’s Pikmin Adventure obviously owes a lot to the Pikmin franchise. This level starts with an incredible rocket ship crash, sending a helpless Mario down to the planet’s surface. Goombas take the place of the adorable Pikmin here, acting as required projectiles to take out a range of giant baddies. Reimagining Pikmin’s gameplay within the confines of Mario is a perfect example of creativity at work in Super Mario Maker 2. 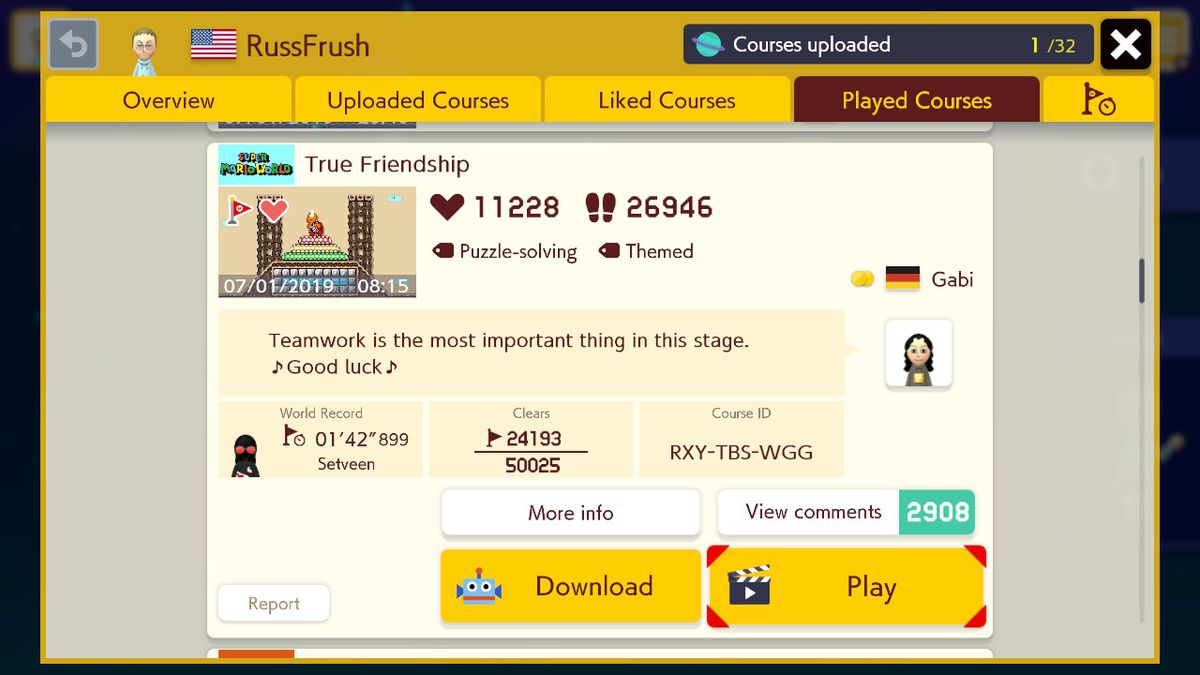 There is no greater bond than the one exhibited between Mario and a giant, red-shelled Koopa in this level. The pair must work together, surviving puzzles and trials through well-timed jumps and platform-building. Of course the Koopa just sorta marches along, but I know deep down he has a soul, which makes the culmination of this level so emotional. 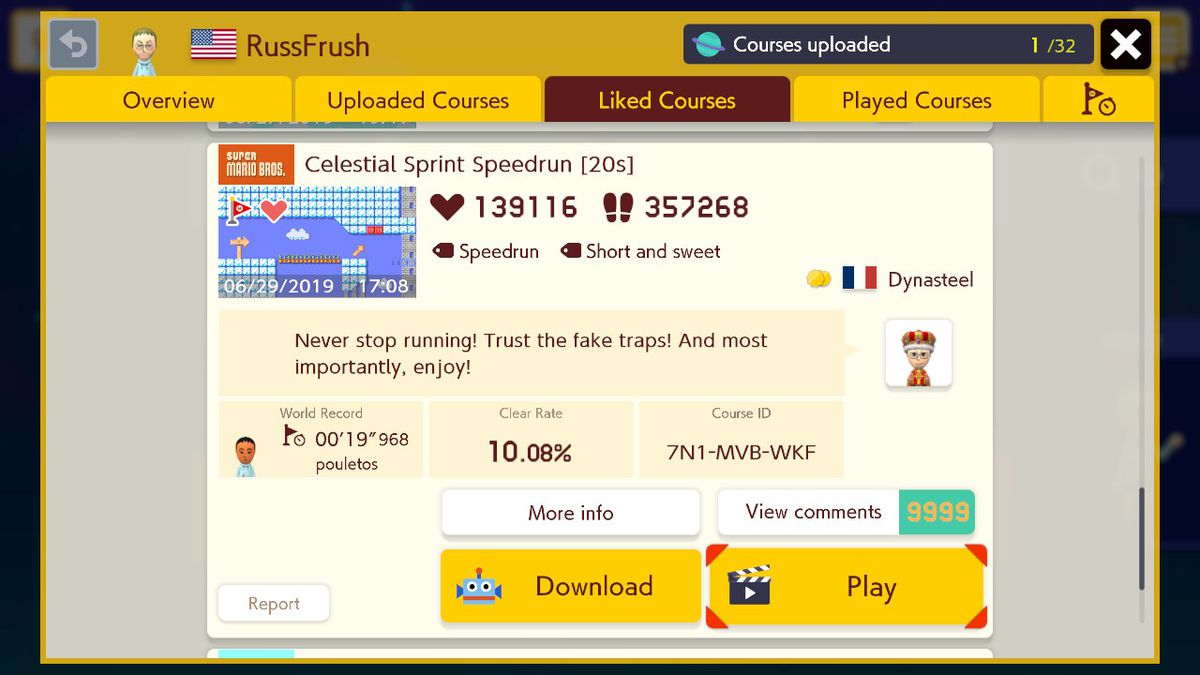 The direct opposite of an Auto-Mario level, Celestial Sprint Speedrun requires constant movement. A second’s pause and Mario will find himself very dead. There are a number of these types of levels that require dozens (if not hundreds) of attempts to complete, but Celestial is just difficult enough for normal humans, and definitely doable after a few attempts. Well-timed special effects and a thrilling climax make it an unforgettable journey.

Brother Can You Spare a Coin? 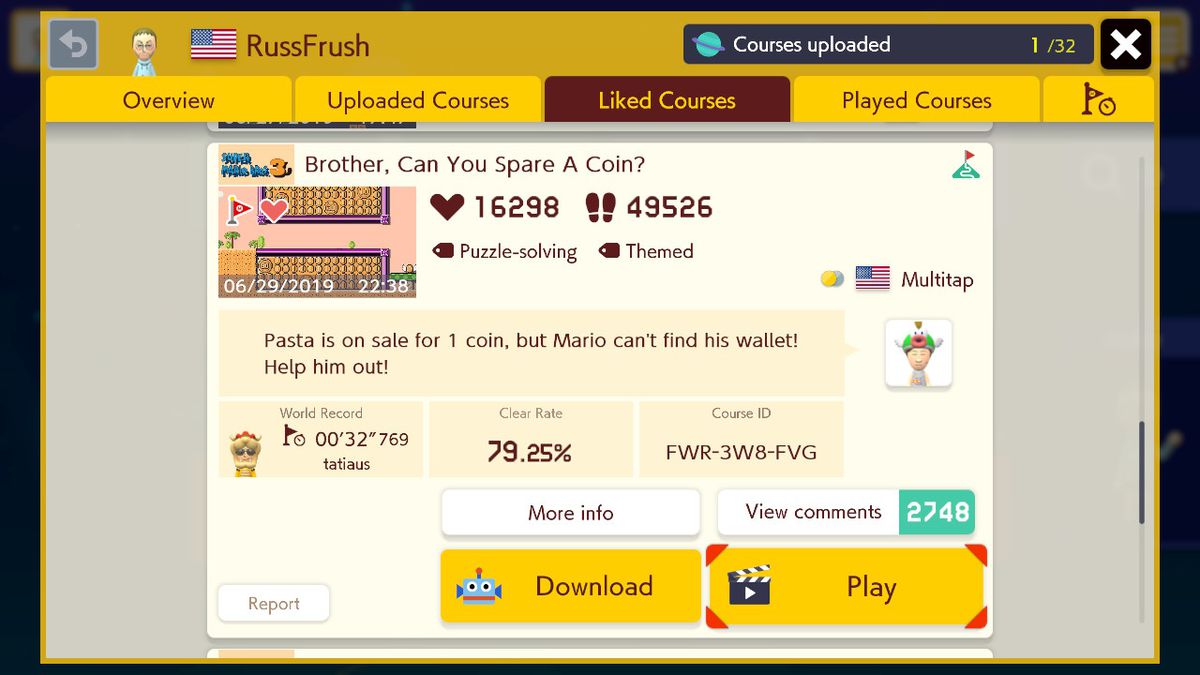 It’s hard to imagine a Mario level being “funny” but Brother Can You Spare a Coin? pulls this feat off with a simple premise: All you need to do is collect one coin. While not challenging, this level’s constantly-creative trolling of Mario make it a real emotional rollercoaster. That’s an impressive feat in just a minute or two! 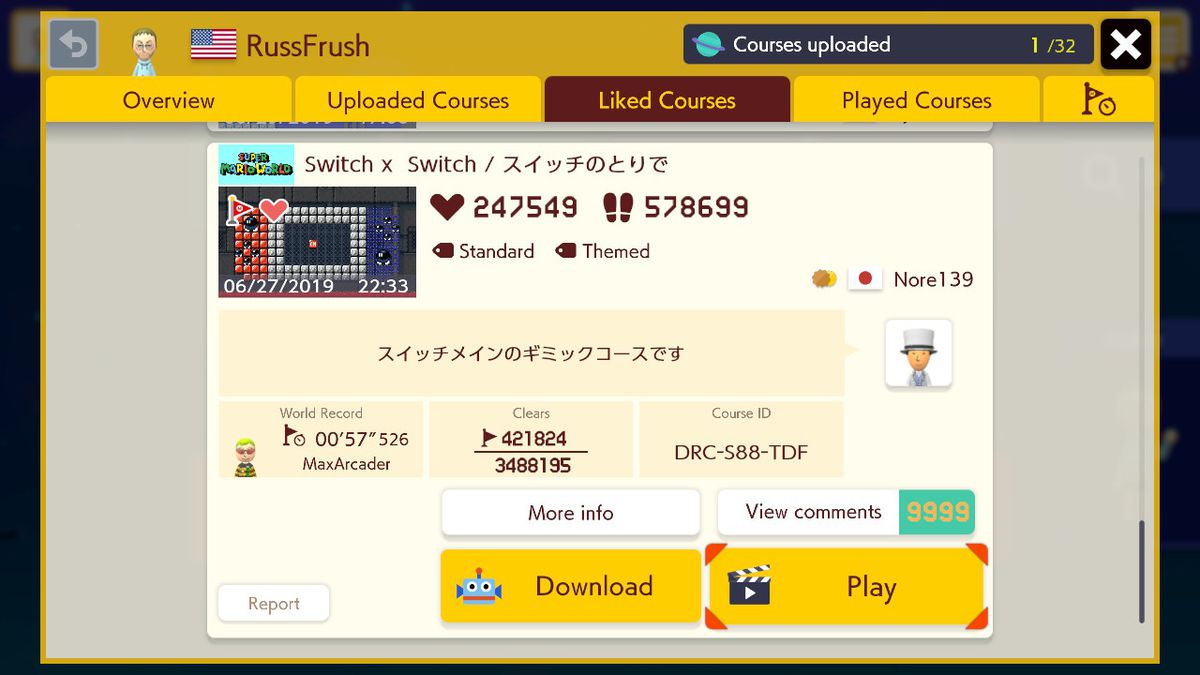 On/Off Switches are new to Super Mario Maker 2, and they allow for a lot of creative level design options. Switch x Switch is currently one of the most popular levels in the game, emphasizing the true diversity of these blocks over a range of platforming challenges. While it starts out easy, these jumps soon require the blind faith of switches to yield magical platforms before you plummet into a fiery abyss. Of all the levels on this list, Switch x Switch feels most like an internally-designed Nintendo level, which is our highest praise. 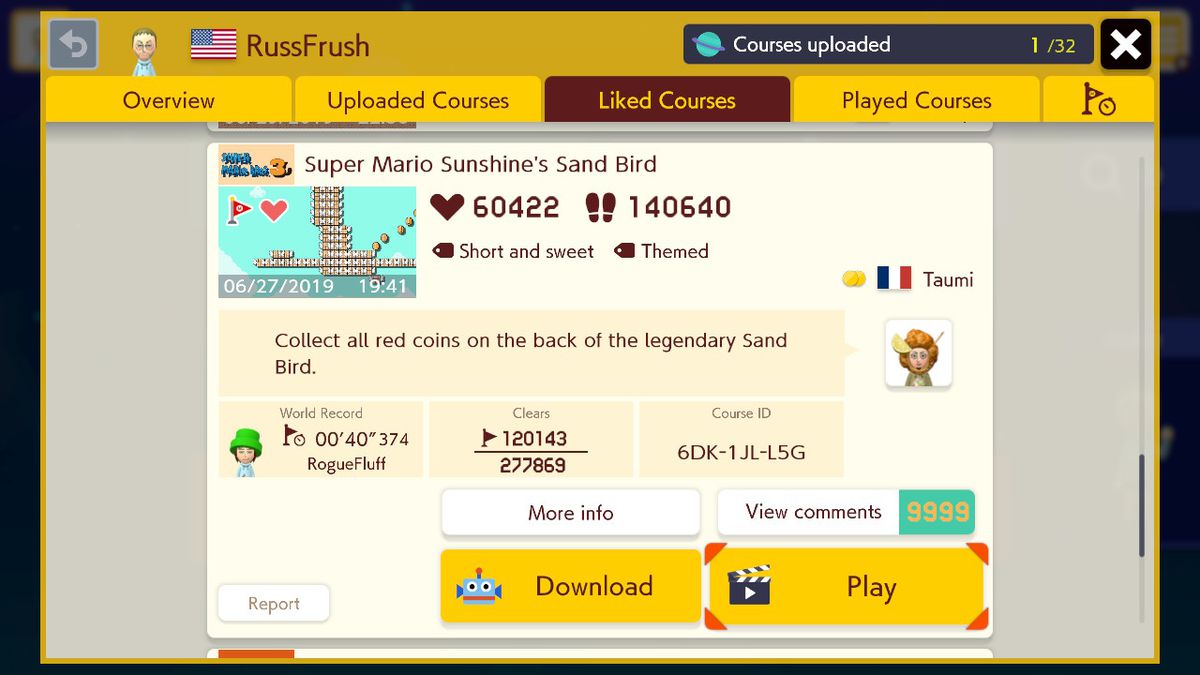 This auto-scrolling level is bizarre in a few ways, not least of which that it scrolls (gasp!) left. But it also features an amazing creation: a soaring sand bird, inspired by a similar level in Super Mario Sunshine. Both birds are made up of flying blocks and require some clever scrambling to collect much-needed coins. Seeing such an accurate representation of a 3D level in a 2D game was just mind-blowing. 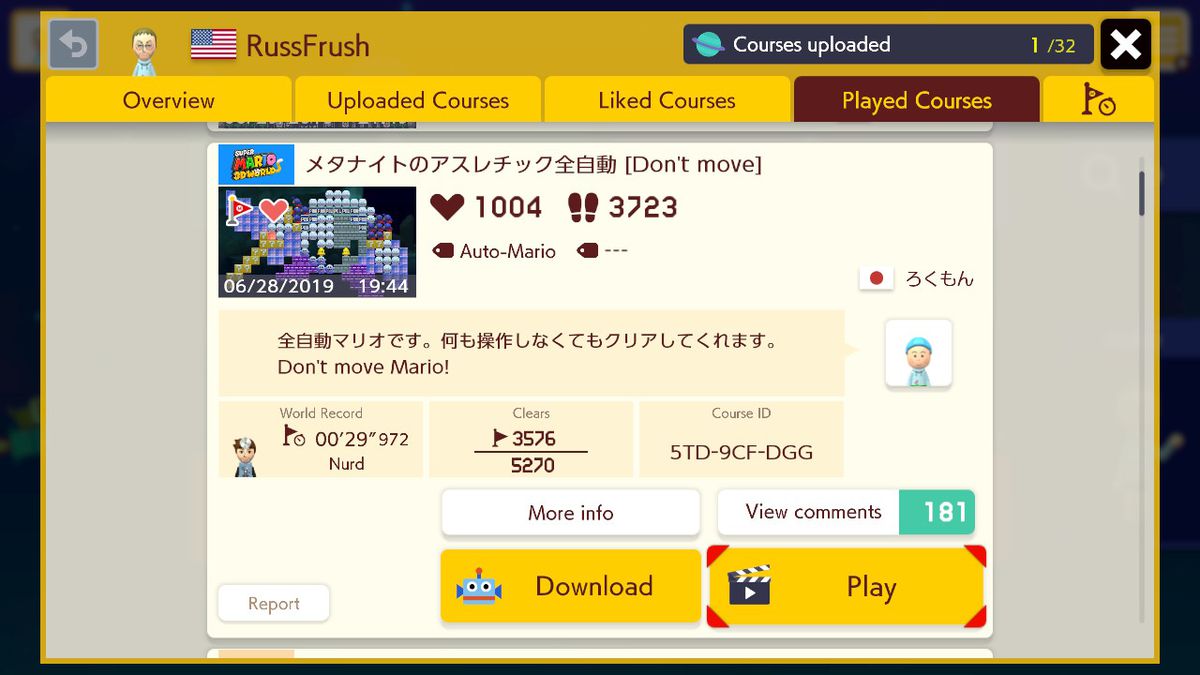 One final Auto-Mario for the list, this level uses the newly added Super Mario 3D World theme to create a precarious gantlet for Mario. But, thanks to some brilliant timing, Mario is able to make it through the barrage of ghosts unscathed. If you want to convince someone that you’re a master at Super Mario, pop this level on, pick up a disconnected controller and let the physics do all the heavy lifting. 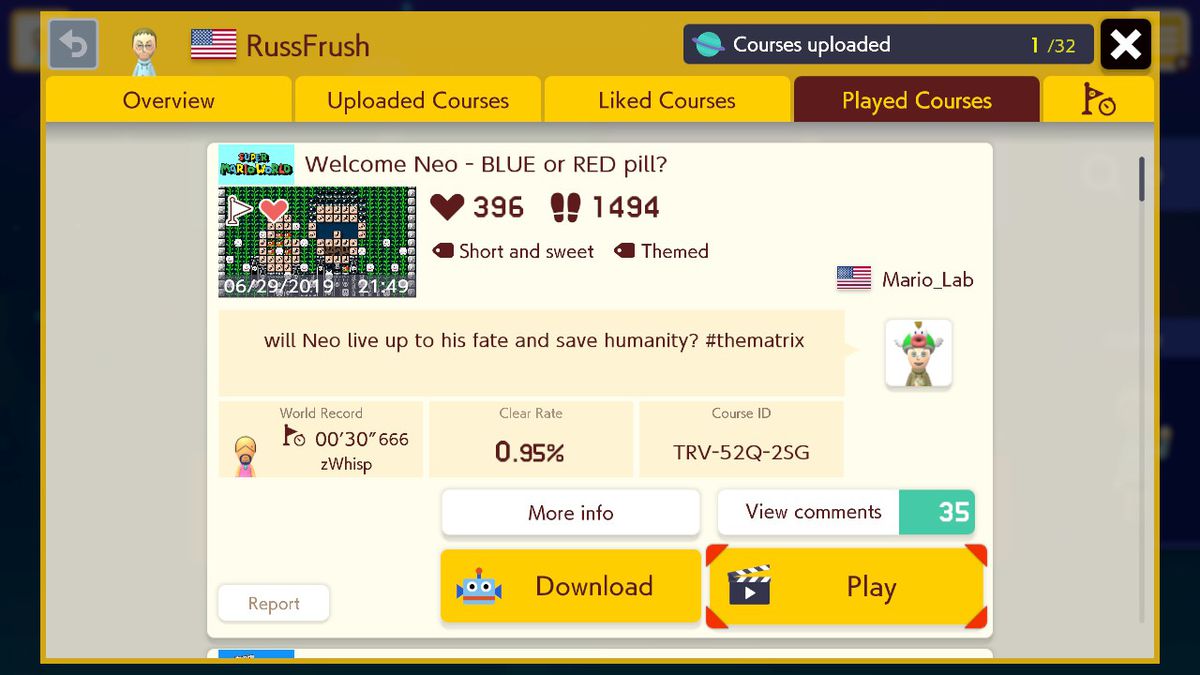 I’ve gone easy on you for this list, but I thought I’d toss you one toughie to please the masochists. Welcome Neo is really two levels in one. In an early screen, Mario must pick between a blue pipe and a red pipe. Each pipe leads to similar-looking stages, but with completely different obstacles and encounters. And if you think one of them might be a cakewalk, think again. Full disclosure: I still haven’t beaten either route, but they’re both incredibly well designed.