The Legend of Zelda franchise has always had dark, twisted aspects it. The dark, Ganon-ruled future of Ocarina of Time, the wolven realm of Zant in Twilight Princess and, of course, the doomed-to-be-mooned world of Majora’s Mask.

But no game in the franchise can compete with the true downer of them all: the bright and sunny island world of Link’s Awakening.

Nothing about Link’s Awakening seems depressing. It’s arguably one of the most upbeat games in the series, at least on the surface. The recently released remake on Switch is ultra cute and cuddly, with colorful, childlike characters just living their lives on a happy little island called Koholint.

There’s something up with the island of Link’s Awakening. The game starts with Link’s boat being caught in a storm, and he then wakes up on a beach amid the wreckage. Link is soon rescued by Marin (a girl who looks a bit like Link’s old paramour, you know the one), who takes him into her house so he can rest up.

Once recovered, Link heads out to explore, quickly stumbling on his sword on the beach. It’s all pretty typical stuff. He is then approached by an owl:

What the hell is a Wind Fish? No idea! But violent monsters have gotta be bad, right? And if waking the Wind Fish means getting rid of those violent monsters, that seems like the way to go!

And so I set off to wake the Wind Fish, but to do so I need to collect eight musical instruments, which I will then play in front of the Wind Fish’s egg, waking it and ridding the island of monsters forever.

The monsters, predictably, DO NOT LIKE THIS. They frequently try to discourage me from collecting the instruments, saying the island will disappear if I do. Of course they would say that, right? They’re monsters.

And so I go on my merry way, killing those same monsters, collecting instruments, working my way to wake the Wind Fish and save the day. I make many friends, and partake in an infamous swapping quest that introduces me to all of the locals of the island. But hey, it’s nice to know the people you’re trying to save.

Marin and I meet again at the beach where she saved me, around halfway through the adventure. She says she has a wish for the Wind Fish:

“If I was a seagull, I would fly as far as I could! I would fly to far away places and sing for many people!…If I wish to the Wind Fish, I wonder if my dream will come true…”

Nice wish! I wonder if the Wind Fish will grant it as a thank you for waking him up? Here we gooooo! 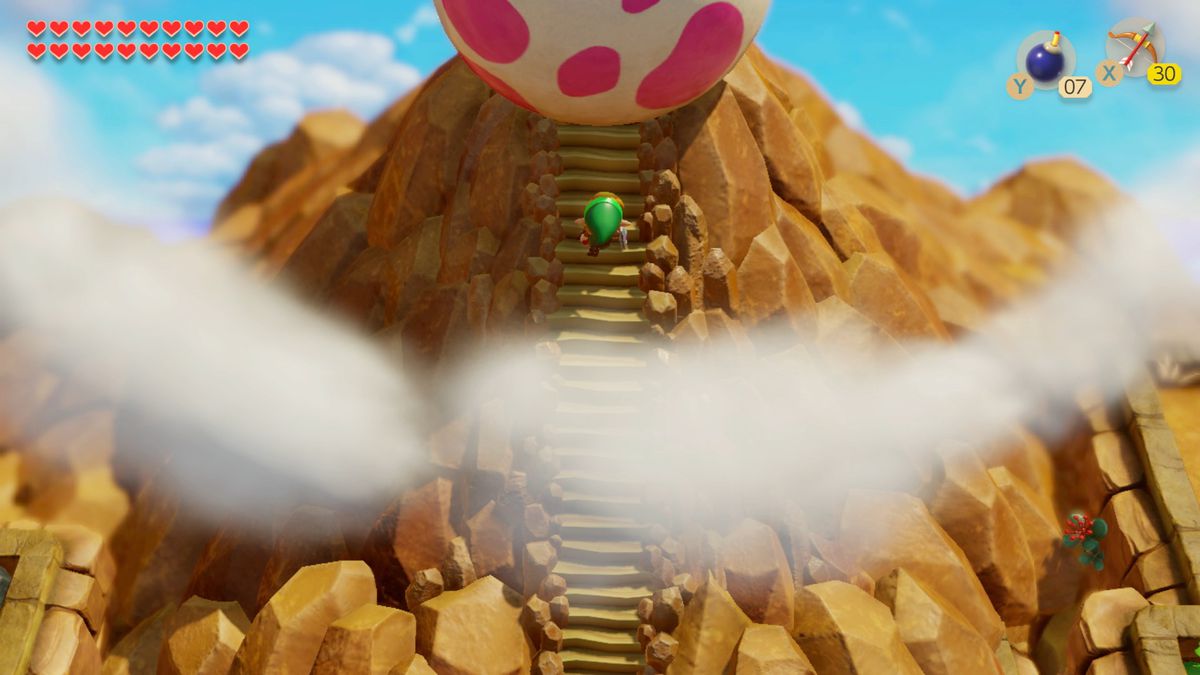 So, in classic Zelda fashion, with all of the instruments in tow, I march up to the Wind Fish’s egg and play my heart out. I’m gonna save the goddamn day. This is the moment we’ve all been waiting for!

The egg cracks and I’m introduced to the source of all of the monsters on the island, the one that has infected the Wind Fish and caused him to sleep. And now it’s time to end this.

The final boss is a shadowy version of Ganon’s pig form, hurling a deadly spear at me. I stomp him good. But he gives me a warning with his last breath:

“Why did you come here? If it weren’t for you, nothing would have to change! You cannot wake the Wind Fish! Remember, you…too…are in… …the dream…”

The evil defeated, I am finally face to face with the Wind Fish. I am here to know the truth:

“I AM THE WIND FISH…LONG HAS BEEN MY SLUMBER…

IN MY DREAMS…AN EGG APPEARED AND WAS SURROUNDED BY AN ISLAND, WITH PEOPLE, ANIMALS, AN ENTIRE WORLD!

BUT, VERILY, IT BE THE NATURE OF DREAMS TO END! WHEN I DOST AWAKEN, KOHOLINT WILL BE GONE…”

And there it is. This was all a dream. All the adventures I had, all the friends I made … even Marin and her wish to be a seagull, it was a dream of this weird flying whale dude.

Vox Media’s own Chris Grant played Link’s Awakening with his five-year-old son. Upon reaching the end, his son was stunned. “So they’re all gone? The monsters were right?” his son asked.

That’s some brutal shit right there. I remember having this same dark realization when I played it on Game Boy as a youngster. It sticks with you. You try to help some people, and because you didn’t listen to the monsters, you instead wipe them out of existence completely.

Link wakes up in the final cutscene, clinging to the remnants of his busted ship. Apparently he was pulled into the Wind Fish’s dream, the only hero that could wake it up. And now that the job is done, the island is gone. Link looks up into the sky to see the Wind Fish soaring above him. Link smiles. Which seems like an odd choice given how fucked up this whole thing was, but whatever, he may be dehydrated.

But, as an added gut punch, in the original Game Boy game, if you managed to complete the adventure without dying, there’s a quick bonus scene at the end where Marin flies by with wings, meaning her dream to become a seagull finally came true. Ah god, my heart.

I thought my young age was part of the reason I felt so many emotions at the end of Link’s Awakening when I first played it on Game Boy. But no, it still stings. It stings real bad.

People sometimes have trouble finishing games because it means they’ll have to say goodbye to a world they fell in love with. In Link’s Awakening, that same bittersweet sadness is baked right into the story. And I’ll never forget it.