After playing over 30 minutes of The Legend of Zelda: Link’s Awakening Remastered for Nintendo Switch I learned three main things: The combat feels great, old-school Zelda puzzles are still fun (and unchanged), and this game is struggling to perform acceptably on the Switch (at least in full-screen mode on a TV) in its current state. Oh, and I also learned that stealing is wrong (albeit very fun). There’s a video of the incident below.

Let’s start with the good stuff: The shield is now mapped to the right trigger so it no longer takes up one of two inventory slots. This means you can block, stab, swipe, spin, AND jump (with Roc’s Feather, which I got in Tail Cave) all without juggling inventory slots. If you’ve played the original game, you know this was annoying and fixing it is a big deal. Here’s some combat footage from my playthrough today:

The enemies marauding the forest and first dungeon required timed counters, blocking first with a shield then going in for a sword attack — something that feels fresh and new in the remake.

As I mentioned above, getting Roc’s Feather as the first powerup was very cool. Link’s movement is pretty unique in Link’s Awakening, as you find yourself leaping over enemies almost as much as killing them.

Something that Breath of the Wild players might find jarring in this game is that exploration is hindered by roadblocks everywhere, and this Link can’t climb. While you can explore the beach, forest, and town from the start, rocks, pitfalls, and big bushes block almost every path. You know you’ll need to come back later, but it does feel starkly linear compared to the very first NES The Legend of Zelda or even the last great top-down game, A Link Between Worlds. 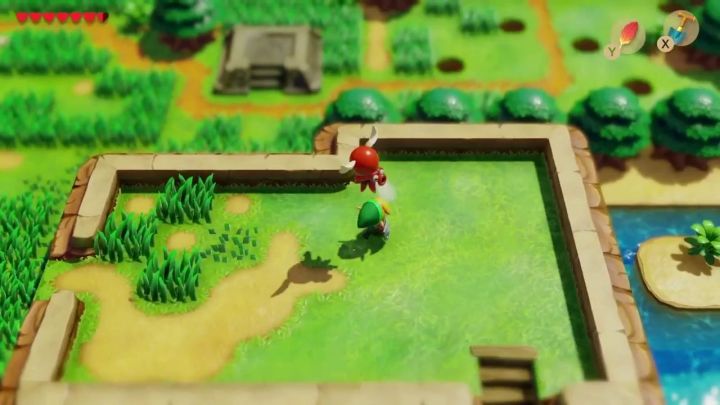 Helping you along is a completely reworked map on which you can mark missed Heart Pieces or chests on when you know you just don’t have the right item yet.

Unfortunately, as screens scrolled and enemies flew, Link’s Awakening became visibly choppy. I talked to others who were playing and they all experienced this same issue. It didn’t interrupt my Moblin killing spree in the forest, but the choppiness was always there, sullying the otherwise gorgeous, toy-like art style.

Link’s Awakening stole my heart. I stole a shovel.

And yes: I am a thief. In the shop in town, I was able to pull off a classic trick and outmaneuver the shopkeep to steal both a shovel and the bow. It was exciting nabbing these items for free, but upon returning to the shop I was shamed, then killed instantly by the shopkeep’s lightning fingers (why doesn’t HE save Koholint?). In the original game your name is changed to “THIEF” when you do this, but the demo didn’t have a name screen and no one had the opportunity to call me this in the section I played. Watch it below:

One other cool thing: In a house in town there were toys everywhere and a bunch of empty pedestals and stands with names like “Boo,” “Shy Guy,” “Pokey,” and “Spiny,” all references to Super Mario Bros. characters which I presume serve as some sort of collectible. These are just some of many references to Nintendo characters outside the Zelda universe in Link’s Awakening. I won’t spoil any more — it’s just one of the many bizarre twists this Zelda game offers that many others don’t.

Also, for classic Link’s Awakening fans: I interviewed Mr. Aounuma today and yes, the Color Dungeon is back.

For more on the remaster, check out this big list of things we learned about Link’s Awakening for Switch today, and be sure to check out the Chamber Dungeons as well, which are the reason this game exists.

Samuel Claiborn is IGN’s Managing Editor and both fixes and breaks pinball machines in his garage. TCELES B HSUP to follow him @Samuel_IGN on Twitter.