Luigi’s Mansion hasn’t gotten the spotlight of many of Nintendo’s other franchises. After its auspicious start as a GameCube launch window game, Luigi and his paranormal adventures didn’t appear again for years. When he returned to ghost hunting, it was on a handheld platform, with 2013’s Luigi’s Mansion: Dark Moon, which modernized the game some, but didn’t expand much on its formula.

Luigi’s Mansion 3 may certainly boost the series’ prominence by returning it to the full spotlight of a main console release. It will be one of only two big, first-party releases headlining the Nintendo Switch’s 2019 fall lineup. The scope is far bigger than the 2001 original, which sends Luigi through the titular mansion. This time, Luigi enters a towering haunted hotel with Mario, Princess Peach, and a small army of Toads on what is supposed to be a luxury vacation. Catastrophe strikes, as it always does for Luigi, forcing him to overcome his fears and travel through the building’s many floors to save his buddies.

According to producer Kensuke Tanabe, who spoke with Polygon at E3, the hotel’s floors are one of the biggest differentiators between Luigi’s Mansion 3 and its predecessors. Each level has a distinct theme, and while Tanabe wouldn’t reveal many details beyond the medieval-themed level I played during a hands-on session, he said they all end with a challenging boss.

The medieval stage is full of secret items and puzzles, requiring I use all the new and returning features of the Poltergust G-00, Luigi’s ghost-vaccuming weapon. I pulled tops off large wooden casks with the new suction bolt, which attaches a plunger dart to walls, which I can then use to pry the stone loose, uncovering secret stores of treasure and baddies alike. All the areas are shadowy and ambient, with the ghosts I battle filling the space with neon glow. Similar to the previous titles, clearing a room of ghosts turns the lights back on, making it easier to spot any additional secrets.

Just like in previous entries, I can stun them with my flashlight and suck them up with the Poltergust. Now, I also can build a meter to unleash a powerful slam attack, pummeling the ghosts on the ground backwards and forwards until its health has been drained.

I can also unleash a new burst attack that feels a little like Mario’s ground pound, releasing a wall of air that repels everything around me: ghosts, furniture, loose food items. The new moves are satisfying additions to a very simple gameplay loop — especially the slam, which feels great when you get it right.

I found the actual act of getting a ghost on the line by aiming by suction at them still a bit fiddly and imprecise, especially when trying to deal with a larger mob of ghosts. But for the most part, ghosts are relatively easy to extinguish when the controls cooperate.

A friend can help with the ghastly mobs. Luigi’s Mansion 3 supports local co-op, with the second player taking control of Gooigi, a slightly terrifying goo-based clone of our hero. Gooigi can be operated by a second player, though the two can’t travel to different rooms to work separately — Gooigi can’t open doors because his hands are goo. 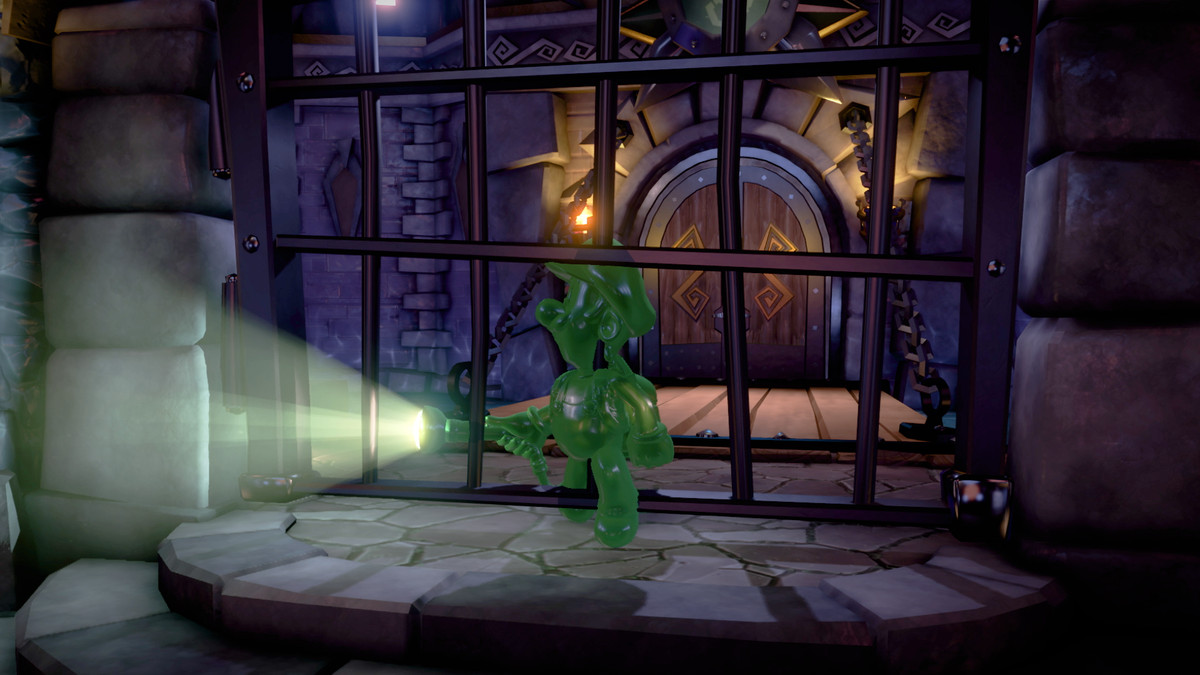 When playing solo, I can summon Gooigi to solve puzzles, swapping control between Real Luigi and Goo Luigi. When I control one, the other lurches forward like a standing corpse. Gooigi can cross spikes or traverse other obstacles that would hurt sweet Luigi, though he will dissolve if he comes in contact with water.

Although Luigi was present in the 3DS remaster for Luigi’s Mansion released earlier this year, he was meant for co-op play, and did not add this level of depth to the puzzle solving. Taking control of Gooigi was crucial in my playthrough of the Luigi’s Mansion 3 demo.

If two Luigis isn’t enough for you, Luigi’s Mansion 3 boasts a multiplayer mode, called the Scarescaper. This mode won’t be unfamiliar to devotees of Luigi’s Mansion: Dark Moon, though it has been significantly beefed up. The Scarescaper has randomly generated floors with different objectives; players will have to capture a set amount of ghosts or rescue kidnapped Toads within a time limit. 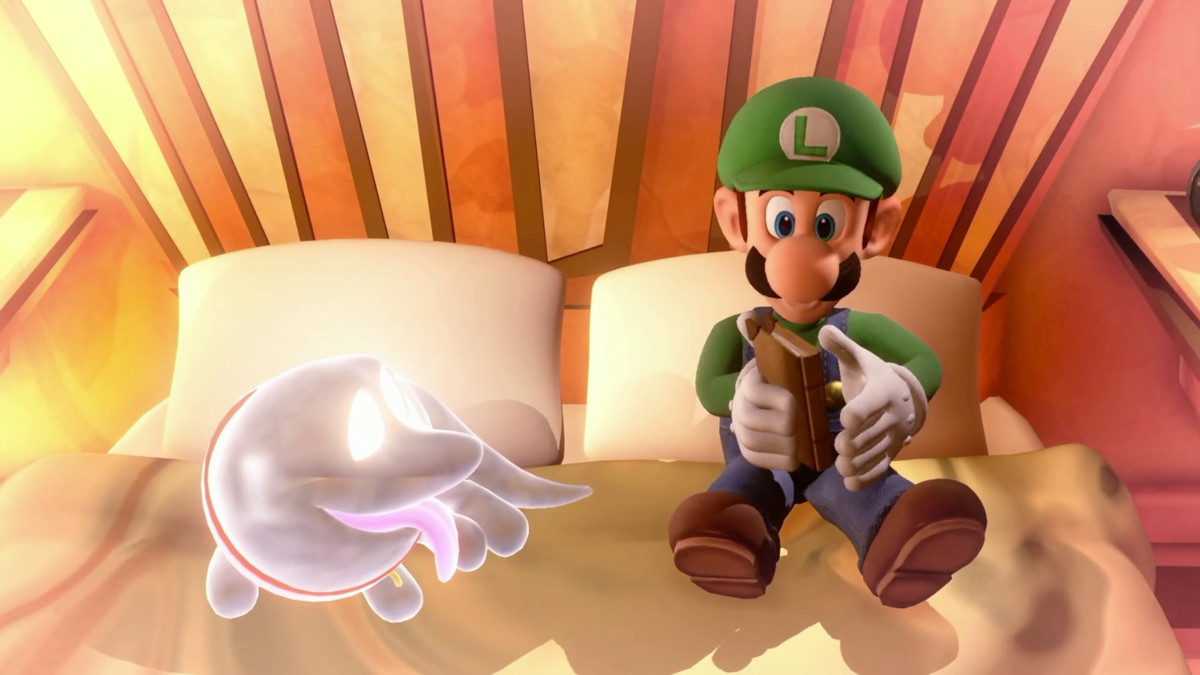 “A lot of people liked the multiplayer mode, but unfortunately not as many people as we would have liked played it on 3DS,” said game director Yoshihito Ikebata. “We made some changes to make it more appealing and easy. In Dark Moon, the entrance kind of splits everyone apart, and in this one, we wanted everyone to start together.”

The co-op mode supports four players on four separate Nintendo Switch consoles on local or online play, though players sharing a Switch can also split into a Luigi/Gooigi team, meaning up to eight players can enter what would be a very chaotic firefight. Each floor is divided into several rooms, encouraging players to split up to beat the clock, but there are lots of traps and powerful enemies. These traps include rugs that roll Luigi up, or fake doors that pin him to the wall. Players will be incapicated until another friend can come and save them. Survival requires communication.

During my playthrough, I was faced with two powerful, hulking ghosts that could slam me down. Focusing my energy on one left me open for an attack from the other, a situation clearly meant for multiple players to tackle at once. After they’d knocked me unconscious, two players came to my aid, and we used a combination of flashlight bursts and teamwork to take them down. While there are communication options mapped to the D-pad, it feels impossible to play this section without a way to talk, making the platform’s lack of built-in voice chat apparent yet again. 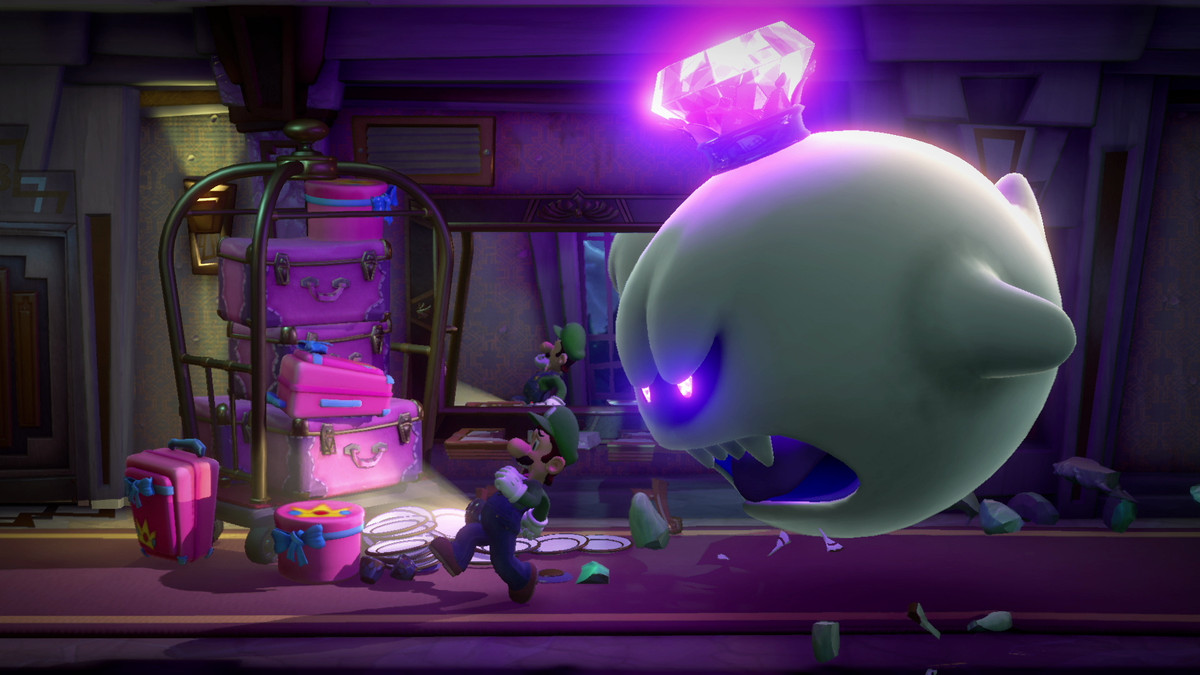 While I only had 30 or so minutes with the hands-on demo, I appreciated how much of the original game’s charms had made the jump to Nintendo Switch. Luigi still is unmatched at being a coward, and his hand shaking and mumbling is in this game too.

“Mario is a hero. He’s the star,” said Tanabe, explaining Luigi’s appeal. “And Luigi is the opposite. That’s part of his charm. But he does have courage and bravery and heroic moments as well. He feels like he needs to rescue everybody, but he’s so scared at the same time. But he’s an empathetic character that people can really appreciate.”

Next Level Games, which also tackled Dark Moon, brought many of its sillier tweaks. Polterpup, who Ikebata’s favorite, makes its ghostly return. The mischievous ghost dog was only in the demo (and game intro, which Nintendo screened for the press) for a few seconds, but he always manages to steal the show.

LuigiI’s Mansion 3 doesn’t have a firm release date, beyond the promise of hitting during 2019. (When asked, Nintendo senior product marketing manager Bill Trinen said Next Level Games is “putting a lot of care into the game. We want to let them put the care into it they want, so we’re waiting on them to let us know and we’ll solidify the release date.”)