The complex and satisfying routine in Anno 1800 is built upon the creation and collection of various resources that you need to keep the inhabitants of your island colony happy. It’s a constantly evolving puzzle that plays out on three levels: Production lines, trade routes, and town layouts. Every level of technological advancement requires more ingredients, more educated workers, and more sophisticated facilities. The puzzle becomes even more complex when you add in that many of the pieces can’t be found or crafted on your starter island; that’s where trade routes come into play. Expansion is an option, but trade is a crucial mechanic for survival.

I’m guilty of getting really cute with my village layouts early on.

I found myself positively hypnotized by the routine of dropping in a farm, plant, store, or other facility and running a road that connects all the way back to the harbor, which serves as every island’s hub. Along that road and the many that will be laid down after it I would place warehouses, complimentary factories, and more, all coming together to give me the tools to move up to the next rung of the economic ladder and produce goods that I can offer in trade to one or more of the AI players scattered around the map. Anno 1800 ultimately tests your vision for your budding city, and the act of breaking ground on multiple new projects while keeping your income in the green is a very different test of skill from something like getting a killstreak in a first-person shooter, but one that’s equally rewarding.

Beyond trade, your AI competitors react realistically and have a variety of personalities. Some aggressively expand with no concern for who their journey impacts, while others reach out to you when seeking out new land to break ground on. On the flipside, you can expect different types of reactions to your own movements as well. Trade can make or break your efforts, so diplomacy is key. The options to offer monetary gifts or flattery aren’t guaranteed to elicit a positive response, however, which adds to the feeling that the AI isn’t just a reactive force for you to manipulate.

For series newcomers, this isn’t an easy game even on its lowest difficulty setting, but learning from mistakes is part of the fun. Trial and error informed my layouts, trade routes, and expansion timing in each playthrough, which would propel me further and further past moments where I’d previously stalled. The higher difficulties test your understanding by giving you less money to burn and fewer refunds for tearing down areas you’ve previously built up. At its hardest, you must step into Anno 1800’s matches with a quick eye for what fits where and be thinking thousands of buildings and resources ahead before you put down your first house. 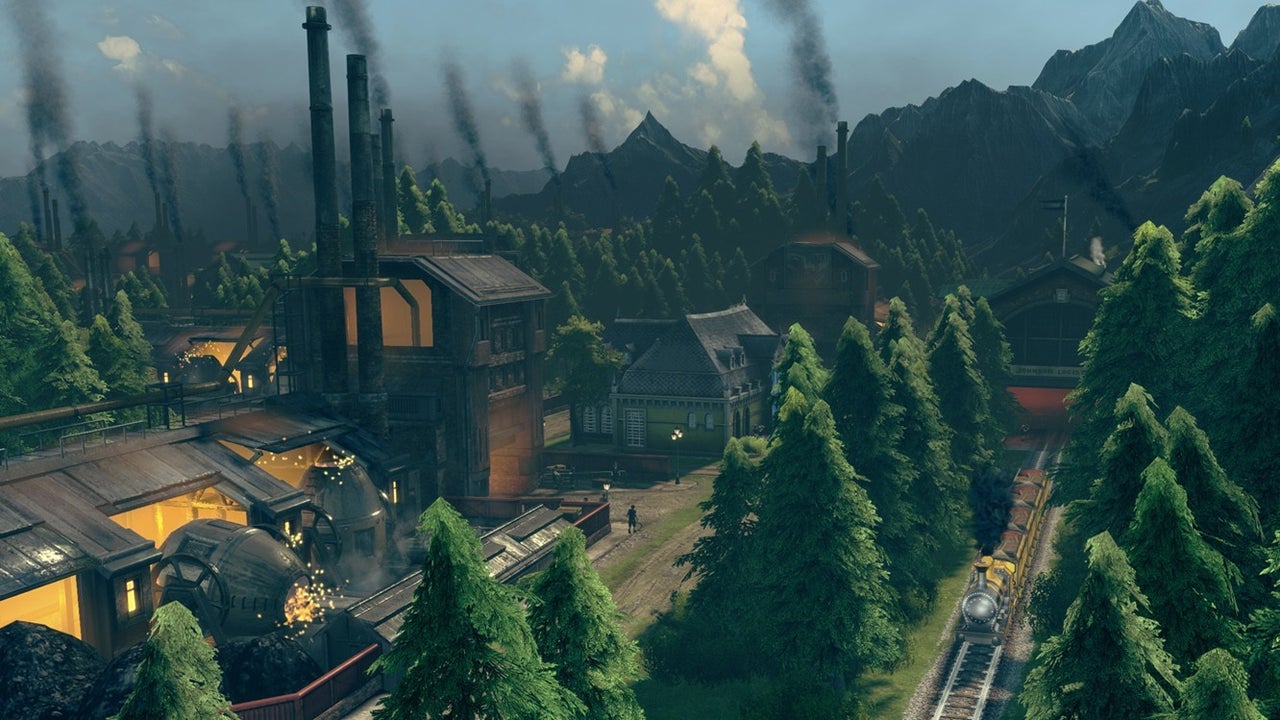 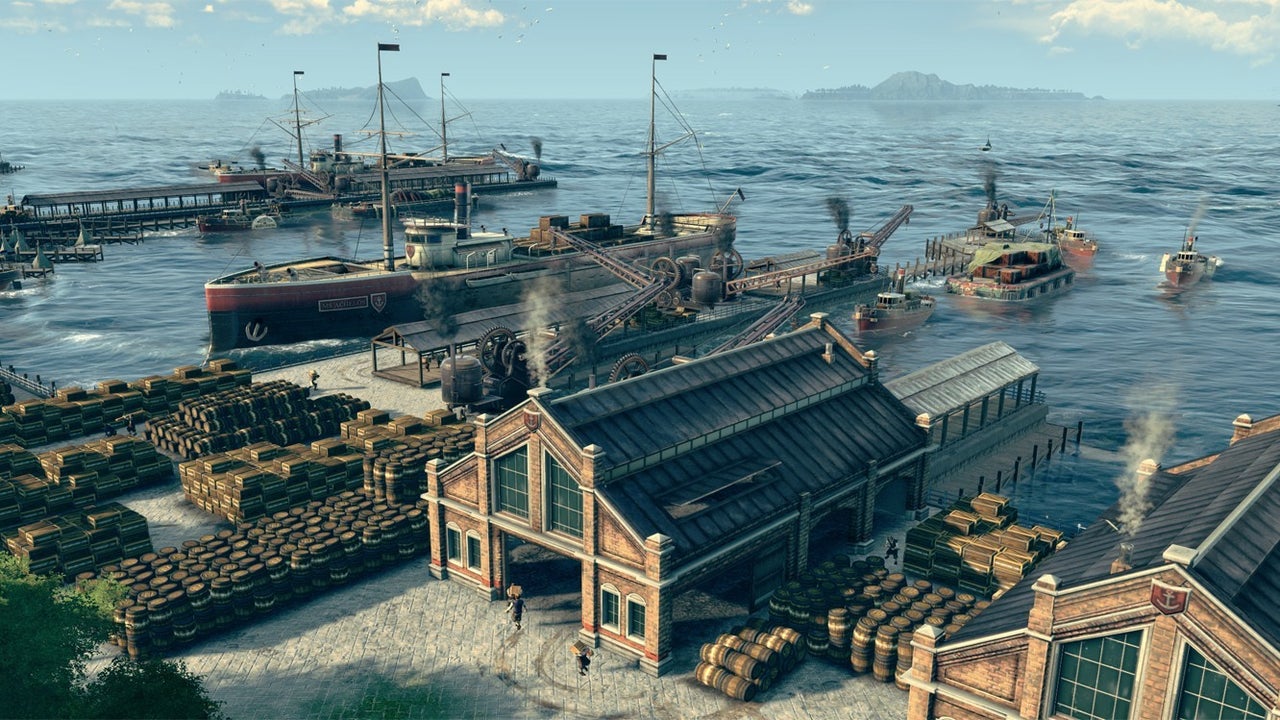 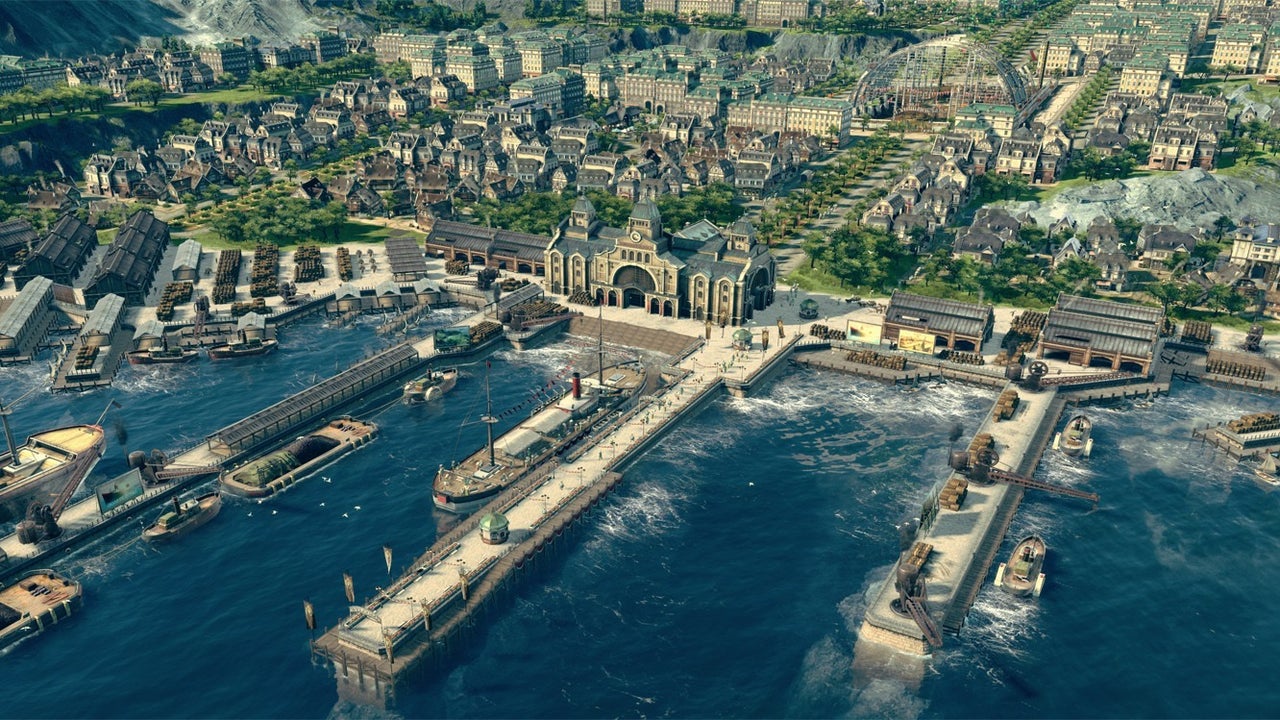 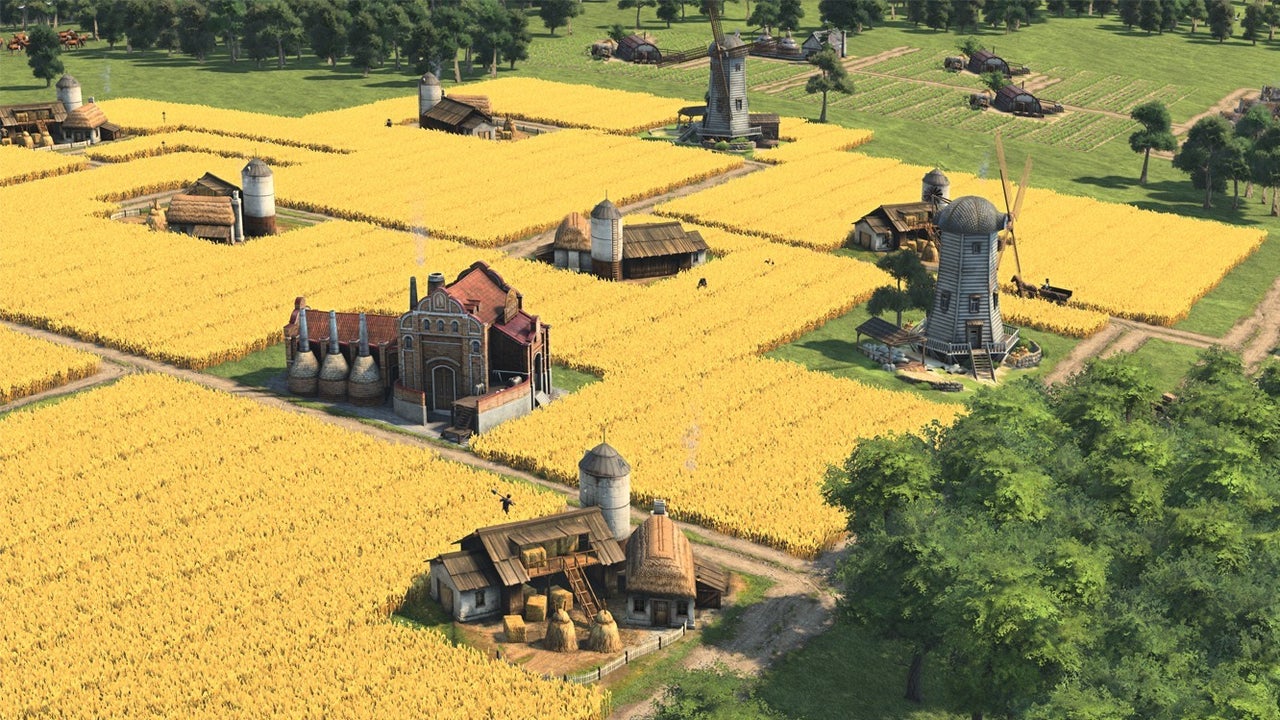 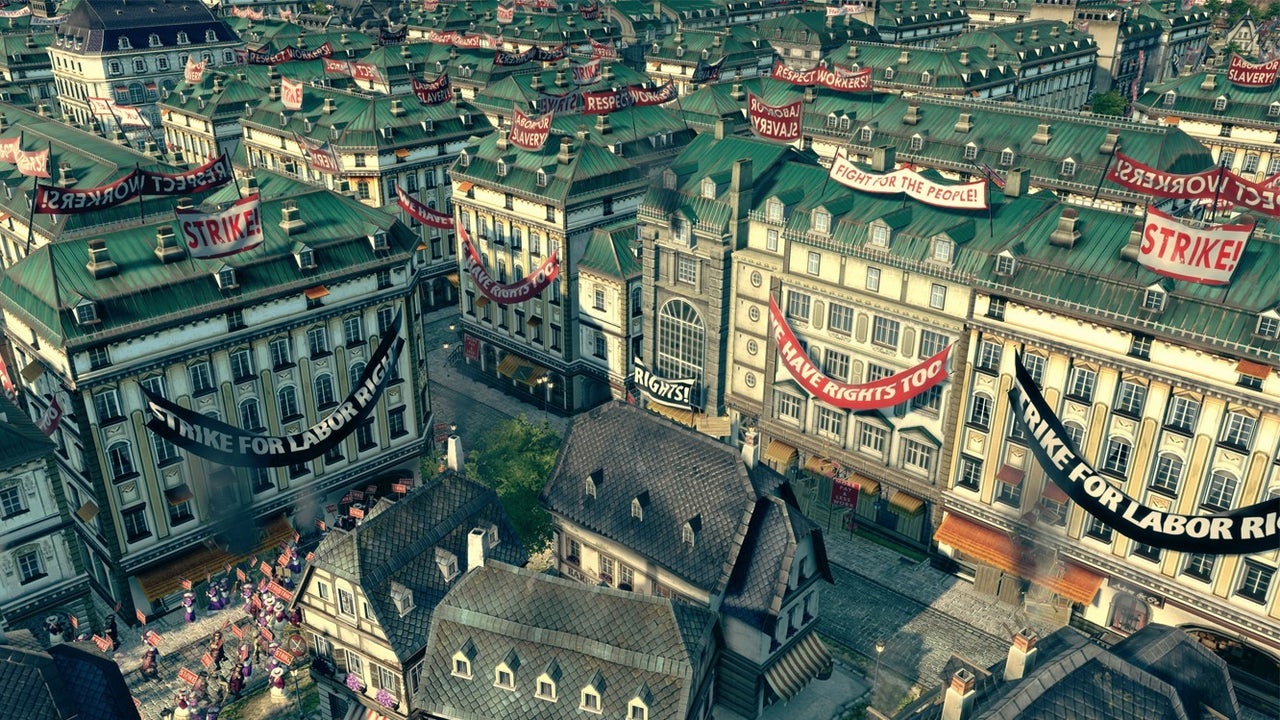 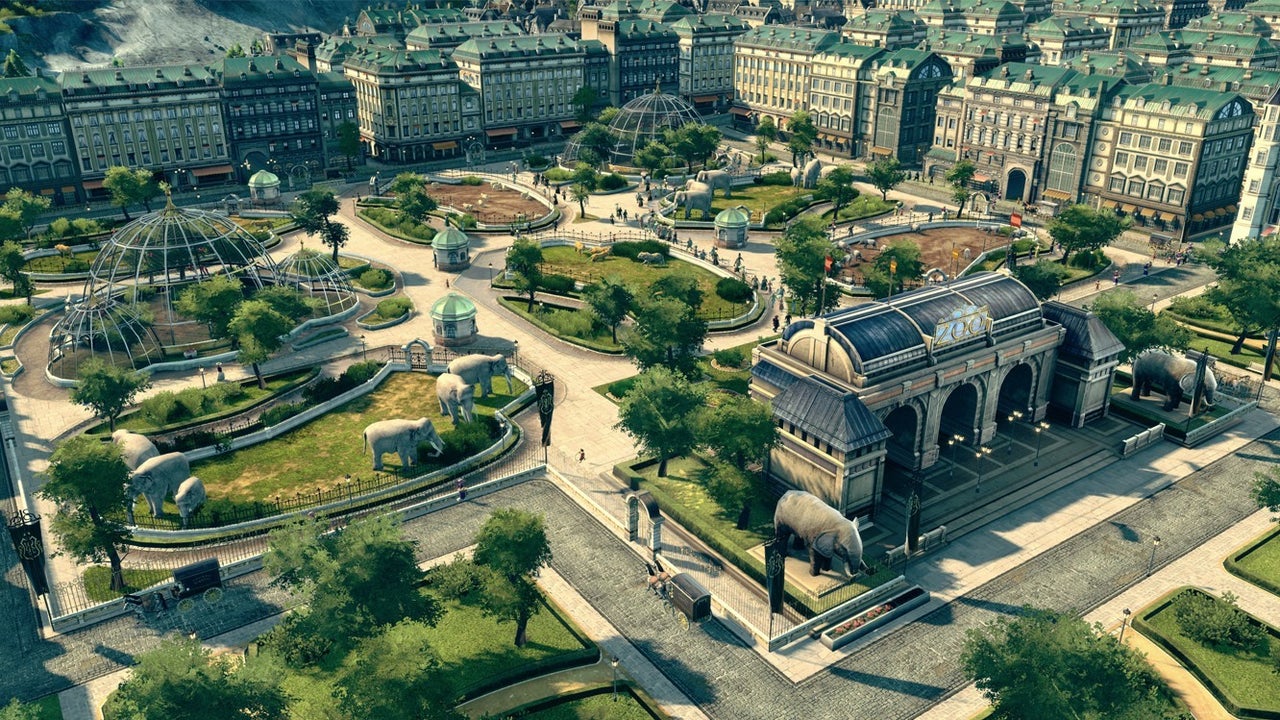 The graphical feast that is Anno 1800 is served in a handful of ways.

There is one noticeable graphical miss regarding the water. Zoomed out, when looking at large undisturbed bodies, the water is beautiful. It glistens, gives off accurate rippling reflections, and is simply a treat to watch. When a ship passes through it or the water crashes up on the shore, though, the trick that the developers used to simulate a wake or disturbance in the water stands out in a not-so-great way. It looks like a static transparent layer that is always there, but begins to appear when water encounters another object. Against the realistic-looking water that seems to flow, its static nature stands out.

The campaign begins with you stepping into the shoes of an estranged sibling who must return to the Old World when your father is accused of treason. What follows is a tale of secret societies, murder, intrigue, and redemption that unfolds over roughly 20 hours of gameplay (which, once finished, immediately switches you into Sandbox mode). It’s not an especially novel story, but it’s more than interesting enough to carry Anno 1800 forward. The world doesn’t stop spinning when these story missions come about, though, so I had to be mindful of the ongoing needs of my colony when jumping around to address them. I had to be especially conscious of the need to multitask when the second map opened up, which is where the Expeditions – a completely new addition to the Anno series – come into play.

Once Expeditions become available, you’re able to take a look at the morale of the ships you’ve made, store some supplies on the vessel you want to send away, and start a journey. It’s an event that happens off screen in between the two maps in Anno 1800, the European Old World and the South American New World. As time passes, you have to make decisions for the crew that play out like a text adventure. Should the crew attempt to sneak away from a pursuing ship or take it on for a fight? A variety of scenarios like this add to the mid-to-late game, which is already growing in complexity alongside your city, and it felt more like a welcome distraction than an overwhelming additional.

If you choose for the campaign to include tutorials as part of your progress, Anno 1800 delivers an above average but incomplete job. Very basic layouts are explained over various quests and even basic elements of the UI, but the process unravels when it comes to the expansion and trade that you will need to do to survive. The diplomacy menu and trade route menu aren’t even addressed in these quests, so you have to open them up and work out the details on your own. One key misstep in my experience came when I learned that the island I started on wasn’t able to cultivate a specific resource. Eventually, I learned that the trade route map shows you what your island is capable of growing when you hover over it.

Sandbox plays out just like the campaign, including the lengthy expeditions that separate the two maps, but without the story quests and special events that color your interactions with the AI players. There’s not much to say about it beyond the fact that multiplayer gives you an opportunity to either flex your building speed against a few friends or work together to fill each others’ warehouses with goods that may not be available on your native islands. Being able to communicate in real time with one of the other inhabitants of your Anno 1800 game also leads to moments like my coordinated effort with a friend to attack an aggressive colonist with our individual fleet of ships. It ended in disaster, but it added another layer to Anno 1800’s very limited focus on battle.

Anno 1800 is a grind at times, but those moments of “eureka” when I’d figure out production rhythms and layouts that kept me operating in the green were delightful. It toes a difficult line of welcoming strategy gaming novices while also providing gameplay that experienced tacticians can maximize, with a well-crafted story-based campaign adding on to an already tried-and-true sandbox formula. It’s a beautiful game to look at as well with only one minor issue that you have to really focus in on to see. Outright newcomers to this type of game will have a tough go at it, as important elements of Anno 1800 aren’t given comprehensive tutorials, but diligent gamers will excitedly watch hours fly by once they get settled in.