Cooler Master announced the SK621 – one of a trio of new low-profile keyboards – back at CES in January, and we finally have a chance to see how it performs. It’s a compact 60 percent mechanical keyboard that does double duty both as a wired and wireless keyboard (See it on Amazon). The SK621’s siblings include the SK651 full-size keyboard and the SK631 tenkeyless model. The SK621 runs $119.99 and is designed for folks who need portability but want the precise feel of mechanical switches. And since it’s built on the relatively new Cherry MX Red Low Profile switches, this keyboard should be of particular interest to gamers – in theory, the reduced travel reduces fatigue and improves twitch performance. 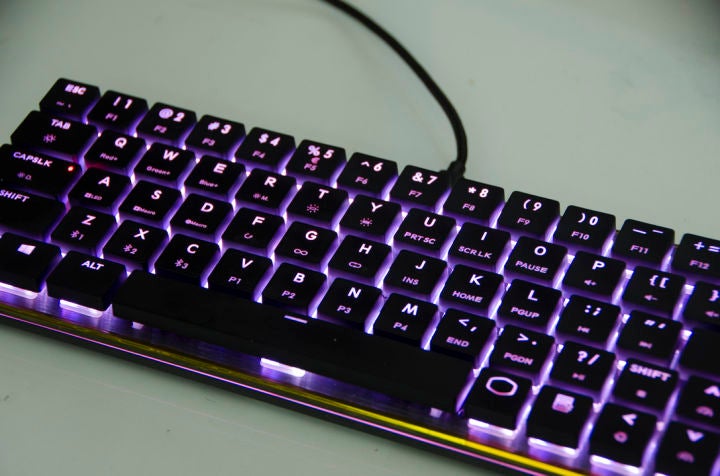 Of course, you might not need to plug in the USB cable; this is a hybrid wired/wireless keyboard, and it connects up to three Bluetooth devices when the keyboard is switched into wireless mode via a small toggle on the side of the frame. Under the hood is what Cooler Master describes as a “large capacity” battery (I couldn’t find its actual capacity, but Cooler Master claims it runs for about 4 months with the lighting off or 15 hours with the integrated lightshow enabled, the latter of which I could confirm). The battery charges whenever the USB cable is plugged in, even if you’re using the keyboard in wired mode at the same time. 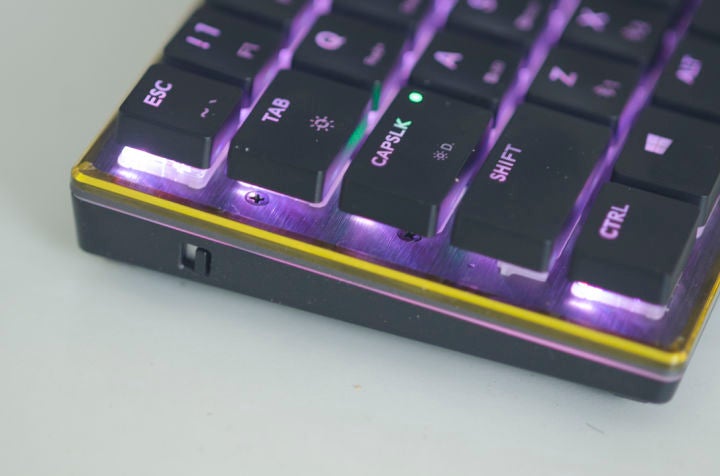 What keys won’t you find on board? Well, there’s no number pad, dedicated macro keys, or standalone media controls. That said, you do get an enormous number of function keys – virtually every one of the (single shot) keycaps has a secondary function inscribed on top. And literally every one of the 64 keys can be reassigned to a macro or just given a different duty.

The most intriguing part of the SK621 is that it’s built on the new Cherry MX Low Profile switches, which to date have only surfaced in a handful of keyboards, like the Corsair K70 RGB MK.2. These are linear switches (ie, they require a full depression to actuate) that have a travel of 3.2 mm and actuation distance of 1.2mm, which is .8 mm less than traditional Cherry MX Red switches. Can you feel the difference? Yes, without as doubt. 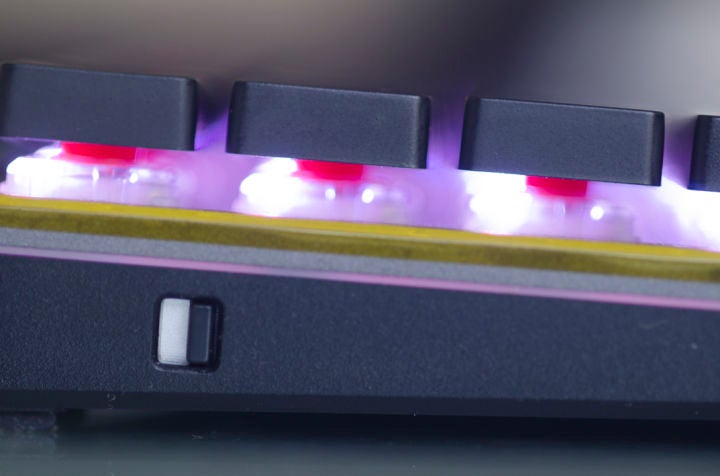 True to its promise, the SK621 sits low, but honestly, not as low as I expected. Ruler and level in hand, I found that my Corsair K70 puts the Shift key about 1.25 inches in the air; the SK621 sits slightly more squat, right about 1-inch. Pulling some keys apart with the included keycap puller, it looks to me like the Cherry MX Red Low Profile key stems are the same height as on regular Cherry MX keys, and so some of the advantages of the low profile switch may be lost as a result. If the switch had used a lower stem, I’m guessing the keycaps could sit a bit lower. 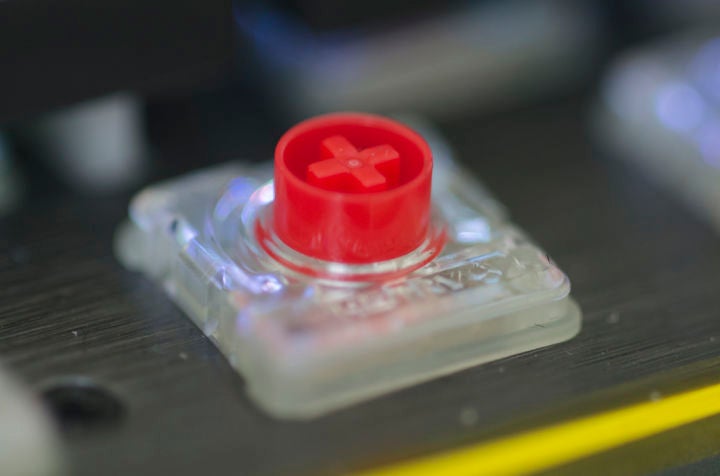 Also, the laptop-style flat chiclet keys nestle much closer together – I measured perhaps a 3mm gutter between keys, which is about half what you’d find in a full-size keyboard. There’s certainly a market for keyboards with spacing this tight, but I suspect I am not it. My typo rate skyrocketed when I first started using this keyboard, but unfortunately, it didn’t appreciably go down with time. I’m just not accurate enough of a touch typist to successfully type in my usual style without constantly brushing the neighboring keys. 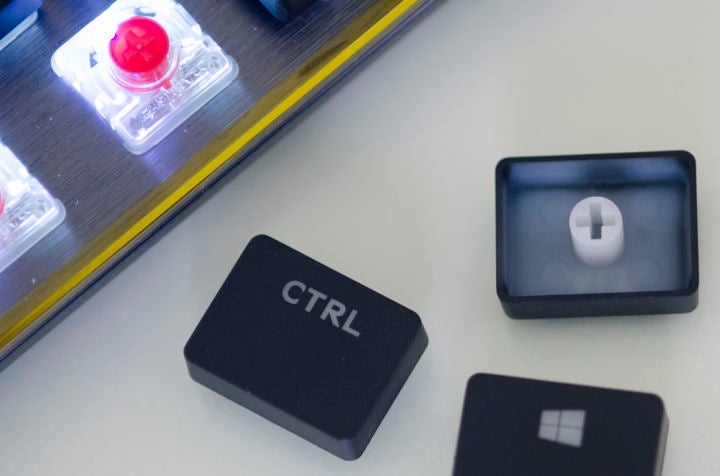 Since this is a Cooler Master product, I expected that I wouldn’t really need to install the desktop software, and for the most part, I was right. There’s an enormous amount of customization available via Cooler Master’s “On-the-Fly” keystrokes. You get eight preset lighting presets, for example, and the ability to tweak the colors using a Function-key-controlled palette mixer – the Q, W, and E keys let you adjust 9 levels of red, green, and blue. Or turn on a backlighting mode, like breathing, fireball, circle spectrum, snowing, rain, or a dozen others. 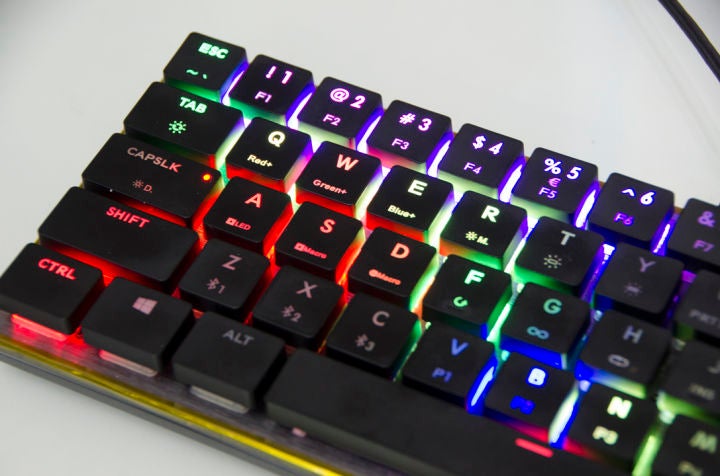 The names don’t do justice to the visuals. Some, like Rain, gently illuminate keys in a subtle wash of color that patters across the board. Breathing makes the entire keyboard fades in and out at a soothing tempo that probably lowers your blood pressure just by watching it. But Ripple and Fireball explode across the keyboard from each keystroke in a way that’s genuinely exciting.

Personally, I found using the On-the-Fly customization to be a bit frustrating – there are a lot of Function key combos and using them is not always intuitive, especially with limited visual feedback. If you want to customize the keyboard more easily, Cooler Master’s Portal software is about as full-featured as you have any right to expect unless you’re landing a Space X booster. You can tweak any backlighting profile, and even assign a different color to every key or set up different lighting modes in different zones of the keyboard. The desktop software also gives you access to programming the 40 or so LEDs that encircle the bezel – but unlike the keycaps, this ring of LEDs is so faint that it’s hard to see in a room with any ambient light. 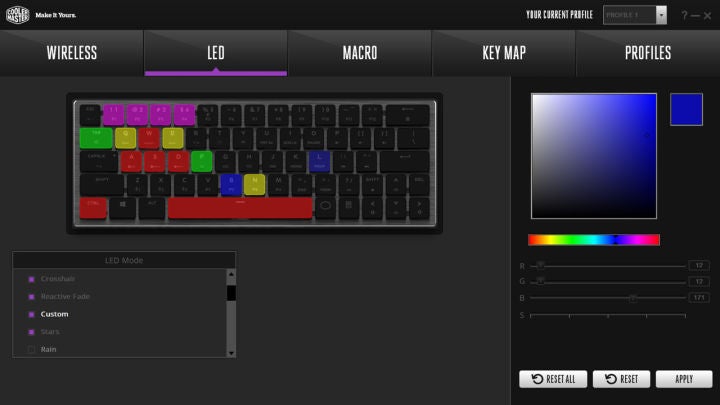 There’s also a macro recorder, which lets you name and edit macros, specify delays, captures mouse-clicks as well as keyboard activity, and control the kind of looping you need (run once, press and hold to loop, or press once to loop and press again to stop). But you don’t have to run the software to create macros; you can create them entirely with the On-the-Fly function keys as well – choose the key, enter the commands, pick the repeat mode with another Function combo, and exit. Unfortunately, any macros you create this way don’t sync back to the desktop software. 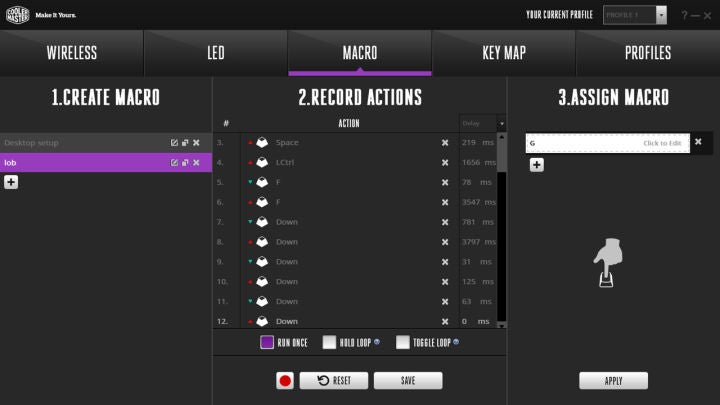 Every key is also fully re-assignable with an easy-to-use keymap, which shows not just keys you’ve reassigned or disabled, but also keys that are now assigned to macros. And you get up to four independent profiles to work with, which means you can have a work profile and a handful of profiles for games.

A few initial observations: First, these keys are quiet – a lot quieter than I was expecting. I’m used to getting noise complaints from the cacophony that occurs when I mash keys, and I’d say these are more than twice as quiet as my usual experience with my trusty Corsair K70. In fact, one evening, my girlfriend in the next room didn’t realize I’d been playing Fortnight for an hour – she thought I was reading. That’s remarkable, and potentially useful, as long as she doesn’t catch on.

The build quality is there, both in how it looks and how it performs.

Also, there’s absolutely no flex in this keyboard whatsoever – if you told me that the top plate was a half-inch thick sheet of steel reinforced with concrete, I’d believe you. The build quality is there, both in how it looks and how it performs.

On the other hand, I’m honestly not a fan of chiclet keys, and that affected my relationship with the keyboard. I’ve never enjoyed doing anything on a laptop – typing or gaming – and the SK621 replicates that experience, just, with great lighting. The keycaps are not completely flat – they have a subtle contour that my fingertips found comforting to rest in – but they’re optimized for typing, not gaming. Only the F and J keys have ridges, and I missed feeling some texture under the WASD keys. And no, Cooler Master doesn’t include alternate textured keycaps for gaming.

But how do the low-profile switches affect gameplay? I fired up Call of Duty 4: Black Ops to find out. I’ve heard other gamers talk about powering through a learning curve with the shorter actuation, but it took me almost no time at all to fall into a solid rhythm with these keys. Which is weird, because I never – even after two weeks with the SK621 – got used to typing on it.

it was almost like I merely had to think about moving, and I was doing it

But I loved the responsive gameplay that came with the keys’ shorter throw; it was almost like I merely had to think about moving, and I was doing it. But I never overshot my destination, popped out of cover, or lost my sight picture specifically because I overplayed the shorter key travel. Moreover, I genuinely appreciated the compact keyboard while playing shooters like Call of Duty and Wolfenstein II – important keys were much closer and more accessible, and that that helped me do everything from toss grenades to slam crates.

All that said, this is far from my favorite keyboard. While the compact 60 percent profile (surprisingly) wasn’t an issue for me in gameplay, it absolutely was a roadblock while typing. I never got used to it, and this very review, before I cleaned up the typos, looked like I had dictated it to a gazelle. 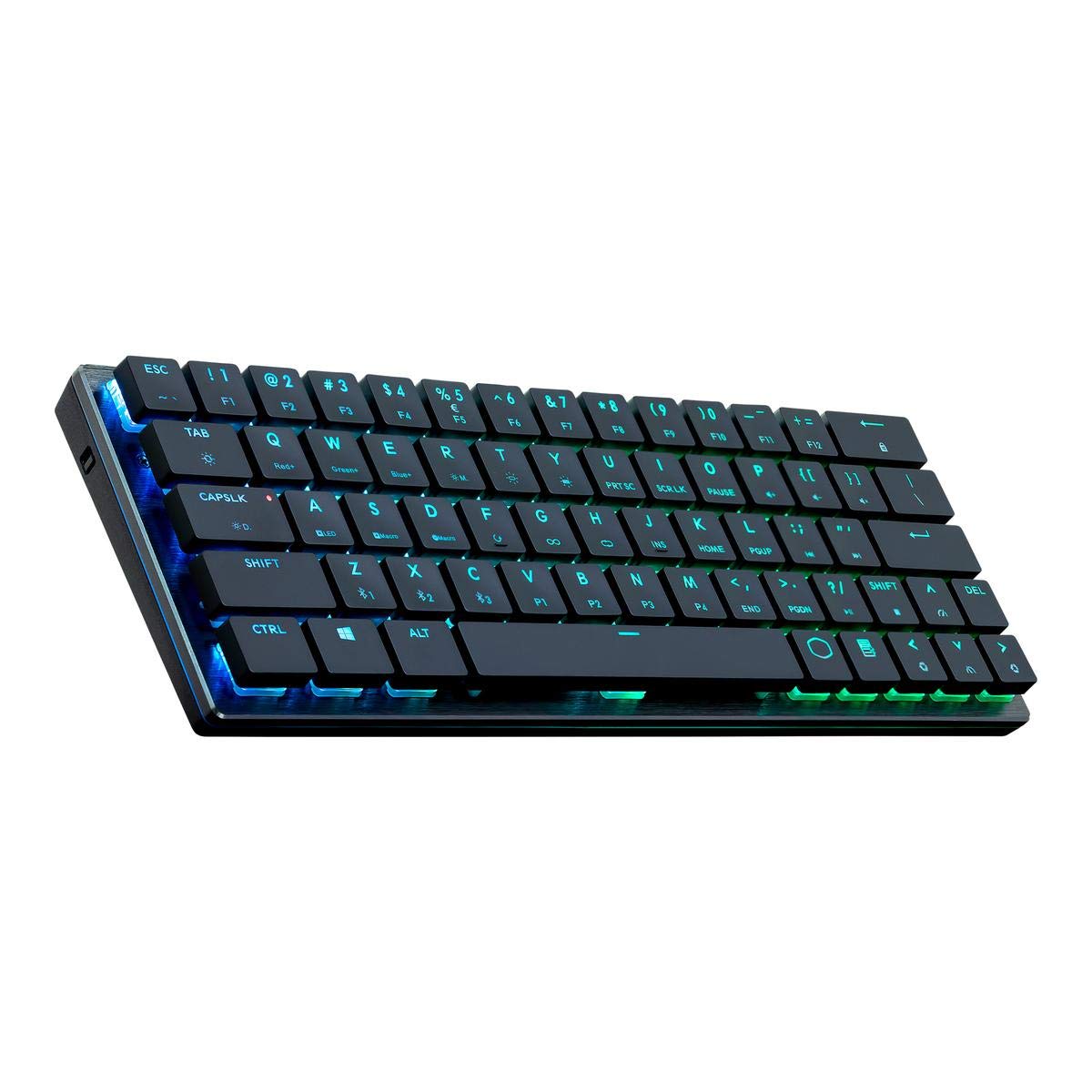 You can’t fault Cool Master when it comes to fit and finish, on-the-fly programmability, or overall aesthetics, and it really does deliver exactly what it promises as a compact, low-profile keyboard. I can’t help saying that I’d personally be more at home with the full-size model in this low-profile family, the SK650. And I’d love it if Cooler Master included a few textured WASD keys in the box or if the keyboard sat just a hair lower. But if you’re an on-the-go gamer with an appreciation for chiclet keys, the SK621 is a tempting option.