When Sam Barlow tracked how folks played his 2015 game Her Story, a narrative-driven mystery that centers around fictional police interview footage, he was surprised to find just how many people devoured it. There are 271 video clips that make up the narrative of Her Story, but the game’s intentionally cumbersome search engine only lets players view five at a time. Watching every single clip to solve the game’s murder mystery isn’t necessary, and there’s even a stopping point communicated to the player when they’ve seen enough to work out the central puzzle.

But Barlow, who spoke to Polygon last week during the Game Developers Conference in San Francisco, found that far more players than he’d expected had watched every single clip, mainlining every bit of story they could from the game.

“Obviously it’s a video game,” Barlow said. “I also made the mistake of having the grid that showed you all the clips you hadn’t seen. But a ridiculous percentage of people 100-percented Her Story versus all of the anecdotes and stats I know from making proper video games.”

While Her Story is narrative-focused and takes about two and a half hours to complete, Barlow says he is trying to prevent those who play his next game, Telling Lies, from tackling it in the same manner, as he thinks it’s an easy way to make the experience less enjoyable.

“I struggled personally with that thing of more open games, because of how I play Zelda games,” he said. “It’s the desire to get 100 percent and just rinsing that game and, and slowly robbing it of any joy.“

Telling Lies is an expansion of the ideas of Her Story, using video recordings of four different characters to weave a story together. Barlow and publisher Annapurna Interactive filmed four actors — Logan Marshall-Green (Prometheus), Alexandra Shipp (X-Men: Apocalypse), Kerry Bishé (Halt and Catch Fire), and Angela Sarafyan (Westworld) — in staged video calls with each other.

With four interconnected stories that take place over two years, Telling Lies is a much meatier game. (Barlow estimated it was four to five times bigger: “It’s accidentally slightly a lot bigger than Her Story.”) The 49-second teaser trailer barely sets the game’s tone, and the only details Barlow offered on the plot were the game’s basic premise: Telling Lies is set on a laptop computer connected to a stolen NSA hard drive full of people’s recorded video conversations. The game’s core mystery is still under wraps, but as in Her Story, there’s a search box, and each of the video clips is searchable. 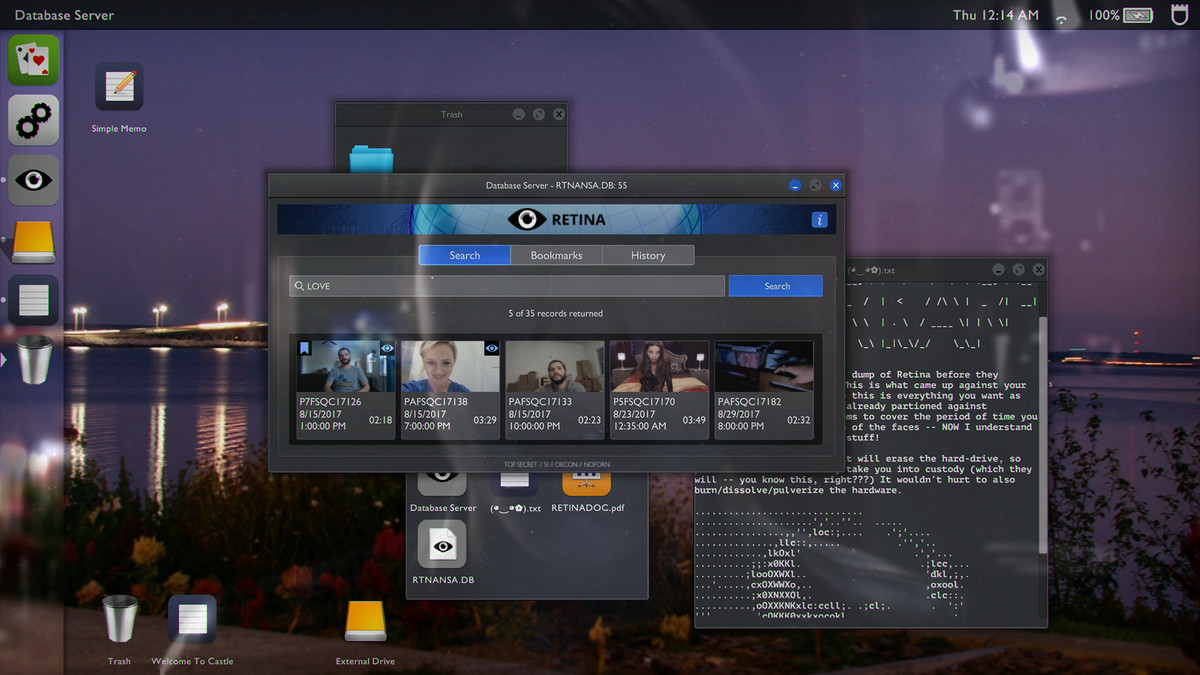 Telling Lies has a desktop interface that’s a bit more modern than the one from Her Story.
Sam Barlow/Annapurna Interactive

But unlike in Her Story, Telling Lies’ video clips start right on the word you’ve searched, meaning players could find themselves at the end of a clip and have to scrub backward to see the full conversation. They’re also only getting half the information — each video only contains its own audio, and not the dialogue that the person is responding to.

Barlow said Telling Lies’ video scrubbing feature is intentionally tactile and slow, so players can’t zip back to the beginning quickly. But since every single word in a call is tagged as a search option, there are always new threads to follow instead of staying in one clip.

“I wanted to make something that was messier, bigger, and looser,” Barlow said, “and encourage people to just lose themselves in it and not have to farm the whole thing dry and extract every bit of information from it. I want you to be distracted by something that someone said and — boom! — jump into another clip.”

The ripped-from-the-headlines premise of Telling Lies allowed Barlow to create a bigger project — one that he hopes will let players lose themselves in a rabbit hole of information, and come out having seen their own version of the story.

“Just jumping around this timeline of events, bumping up against things, creates this really interesting perspective on a story that would be very carefully calibrated if it was a movie,” Barlow said. “But, you have that magic of feeling like you’ve stumbled across something in some of these arrangements of clips. You discover things that are of your own doing.”

Telling Lies has no release date, but Barlow says he’d like “to have it in people’s hands this summer.” It will come to Mac and Windows PC.