I’m keen to dig into the mysteries of developer No Code’s new game, Observation, especially because I consider its previous title, Stories Untold, to be one of the most underrated horror games in recent memory. I would love to write about the presentation of the game, its plot, or even the ending that awaits me … but I can’t, because I have to play Observation in five-minute bursts and then put it down for a while because I feel seriously ill.

In Observation, I’m tasked with uncovering the mystery behind a broken and off-course space station. Doctor Emma Fisher is the sole survivor left on the Observation, and she doesn’t know where her comrades are, or even if they’re alive. I’m not playing Emma — I’m the ship’s AI, SAM. I interact with the environments around me using communication cores, station cameras, and the ship’s internal systems.

This is an awesome concept, and I keep returning to Observation because I am so desperate to make this game work. I want to figure out what’s going on and crack the mystery. The game is drenched in atmosphere, and No Code has taken pains to make every moment as horrifying and immersive as possible. The problem is that they do so with liberal use of camera distortion, flashing images and lights, staticky images, and unsteady angles.

I have a history of migraines and seizures. I work with medical professionals to keep these from impacting my life as much as possible, and I’ve been prescribed appropriate medications and treatment. But it’s rare for media to trigger symptoms for me. Spider-Man: Into the Spider-Verse briefly gave me some issues during parts of the film with rapidly flashing lights, but I haven’t encountered problems while gaming. I’m even comfortable in virtual reality in games like Beat Saber and Tetris Effect. 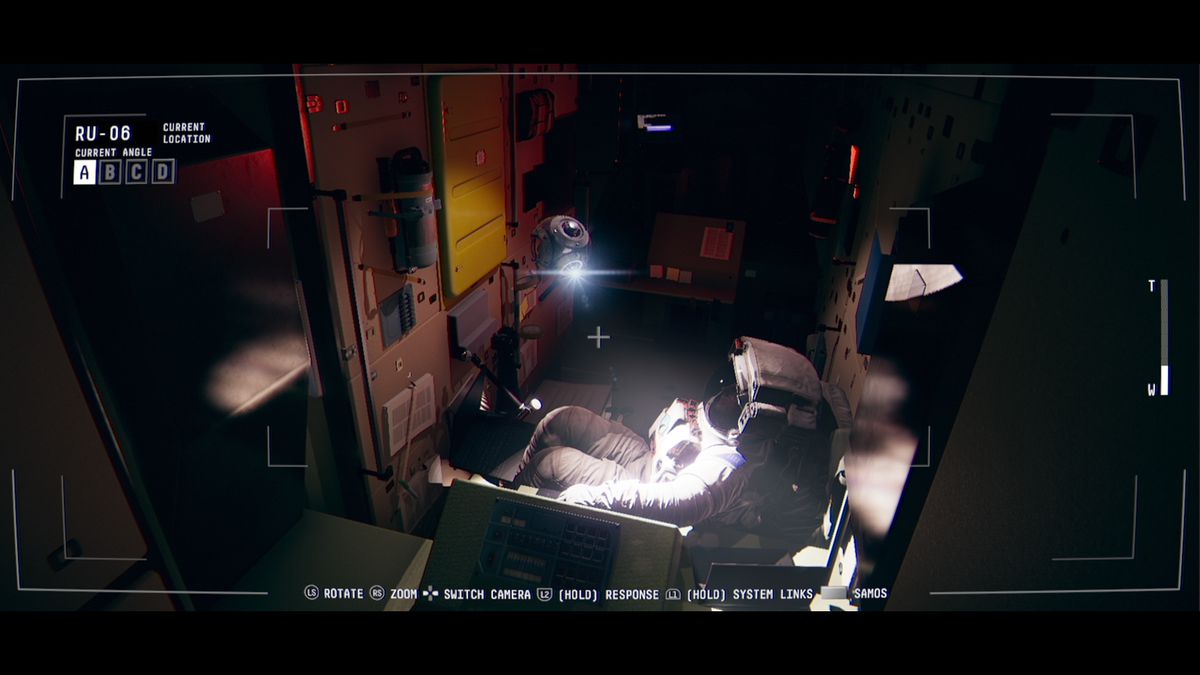 But after about five minutes in Observation, where in one scene I’m tasked with using a damaged exterior camera to assess damage on the station’s scanning arms, I feel like I am going to vomit. There’s a low throbbing pain in my head that is steadily growing sharper and more intense. I have to look away, and even then, the symptoms linger. These are symptoms of an oncoming seizure for me.

I’m not very far into Observation, because this is not a one-time occurrence. Nearly every shot has some kind of disruption or movement that triggers the starting symptoms of a migraine or severe nausea. After playing through the opening sequence, I had a headache and neurological symptoms including difficulty speaking and mental fogginess.

To be frank, this sucks. I’m not putting Observation down because I want to, but because I’m legitimately concerned about seizure risk. Observation takes dramatic pains to be accessible for inexperienced players — it’s about puzzle solving, navigation, and fact finding, not twitch reflexes and complex controls. Despite that, there’s a barrier that I cannot pass, and therefore I can never properly experience the game.

Stories Untold also had a mission that heavily featured flashing lights and symbols, but it was far more limited and did not have the same effects. Observation includes an epilepsy warning after the opening credits and auto-save warning. When contacted, a representative for publisher Devolver Digital noted, “We take this seriously and will also be adding warnings to our store pages as soon as possible.”

Observation is available on the Epic Games store and Playstation 4. Players with photo-sensitivity or epilepsy should be warned that the game’s extreme visual effects can cause issues. While these choices clearly come from a creative and stylistic perspective, I hope No Code can find a way to make the game more accessible in a future patch.