As more hardware manufacturers release laptops with Nvidia’s RTX 20-series of GPUs, a clearer picture of what kind of performance we can expect from the RTX line and its various models has begun to take shape. The first GeForce RTX 2080 laptop I reviewed was the ROG Zephyrus S from Asus, and it was ludicrously powerful. Then I had a chance to test out the Razer Blade 15 (2019) with an RTX 2060, which showed modest improvements over last year’s GTX 1070-equipped model. Next up is the MSI GS75 Stealth with an RTX 2080 Max-Q inside. It’s available in seven different configurations, and the configuration I was sent sells for $2,999 (See it on Amazon). If you’re on a tighter budget, MSI offers a similarly spec’d GS75 variant with an RTX 2060, 16GB of memory, and a 256GB SSD for a mere $2,099. 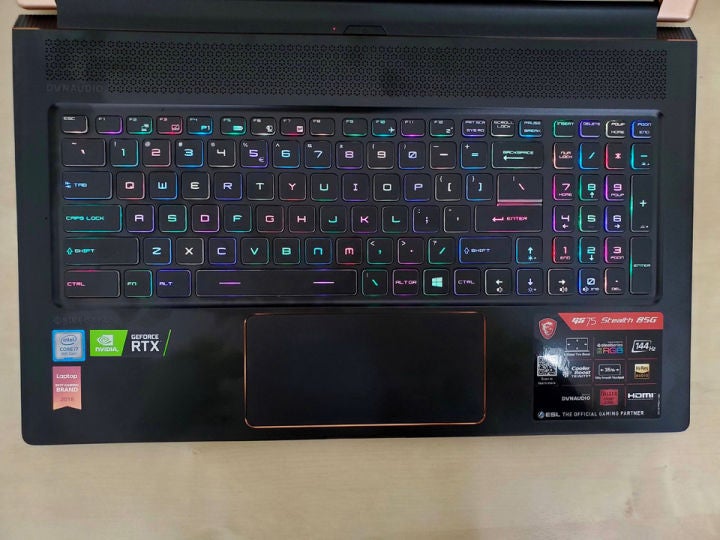 The GS75 has the right balance of ports. On the left side is the charging port, an Ethernet jack, one USB 3.1 port, a microSD card slot, followed by an audio in-and-out. The microSD card slot won’t make dedicated photographers happy, but it does make it easier to transfer and manage files for things like a Nintendo Switch or a smartphone. 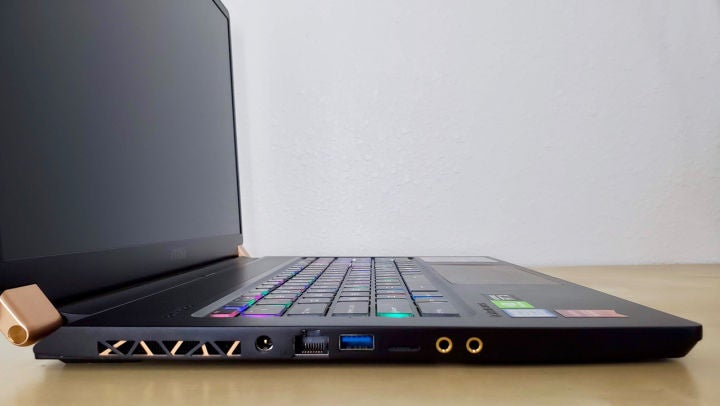 On the right side, you’ll find an HDMI port, a Thunderbolt 3.1 port, two USB 3.1 ports, and a USB-C port. Having what amounts to two USB-C ports, one dedicated to Thunderbolt-equipped accessories, is a nice touch. You can have an external hard drive or a monitor connected to the GS75 and still have another port to connect a USB-C device without futzing with a dongle. 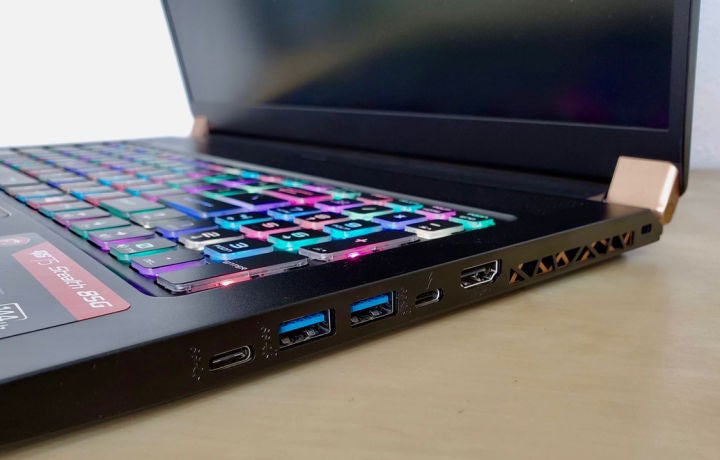 Over the two or so weeks of using the GS75, I found the power adapter would randomly work its way out of the charging port, causing the laptop to limit performance (laptops run at lower clock speeds on battery power). The thing is, the adapter wouldn’t come out far enough to make it obvious that’s what would happen. Instead, I would be mid-game and the system would slow down to 30 FPS or so, leaving me puzzled as to why. Eventually, I figured out the adapter was coming loose, seemingly without any tugs on the power cable.

I’m going to keep banging on this drum until my editor tires of it or companies start doing what’s right: When someone pays $3,000 for a laptop, it should not come with any bloatware installed. And yet, shortly after starting up the GS75 for the first time, a Norton alert attempted to shame me into paying money for its services. Hard pass.

Outside of Norton, MSI preinstalls Killer Control Center for customizing network performance and priorities on the GS75. Other programs preinstalled on the GS75 include SteelSeries Engine 3 (SEE3) and MSI Dragon Center. 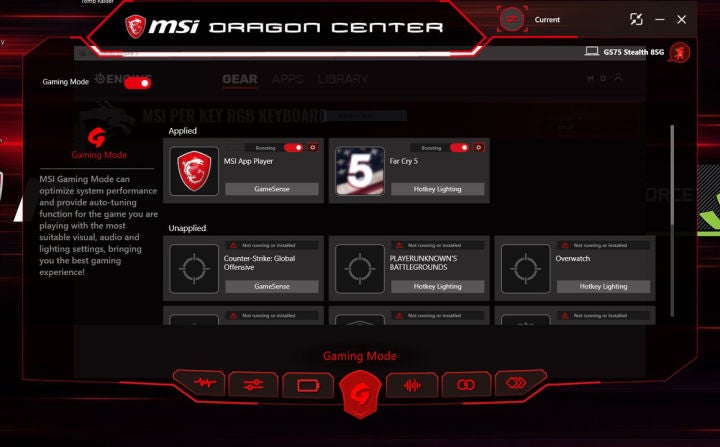 MSI’s Dragon Center provides system stats through its system monitoring interface. There’s also a system tuner section where you can control things like the Windows key, the webcam, and performance boosts and fan speed through various profiles.

Gaming Mode identifies games that are installed on the system and will automatically change the system’s profile (boost fans, change keyboard lighting, etc.) once it detects the respective program is launched. Although, even with seven different games installed on the system, it only found Far Cry 5. I suspect it may be due to how the main drive is partitioned, but couldn’t figure out how to manually show Dragon Center where more games are installed.

SSE3 is used to customize the look and feel of the keyboards RBG lighting. If you sign up for an account you can backup and sync your settings with other SSE3 devices. The service includes the option to add games installed on your system and use lighting schemes specific to that game. For example, the app found Far Cry 5 and Fortnite and automatically used the proper lighting scheme for each game.

As I previously mentioned, vendors can tune the Max-Q versions of the RTX GPUs to fit their specific performance requirements, as well as to customize them for a particular cooling solution. For example, Asus tuned the Zephyrus S to a base speed of 900Mhz, with a boost speed 1,230MHz out of possible 1,590MHz. With the GS75, MSI tuned the base speed to 735MHz and the boost speed to 1,095MHz. That’s a roughly 11% drop in boost speed and an 18% reduction in base speed. Those numbers aren’t insignificant, and it shows in the benchmarks. 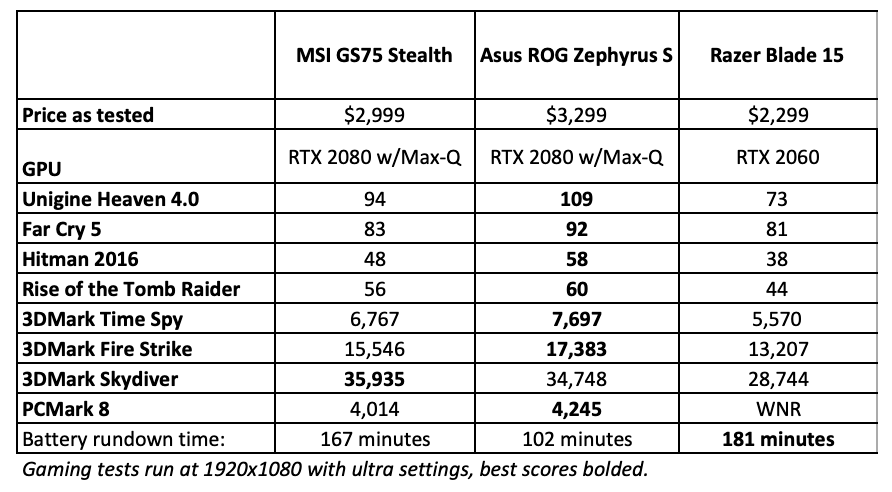 Looking at the comparison chart, it’s clear the Zephyrus S is the faster machine nearly across the board despite having the “same” GPU. Heck, the Blade 15 with an RTX 2060 nearly matched the performance of the GS75 in the Far Cry 5 benchmark. Vendors have a lot of leeway in how they tune RTX mobile chips, so let this be a lesson to you. They are not all the same, but in the end it might not matter that much as they’re all capable of pretty great performance.

Benchmarks aside, I also played some Apex Legends and Fortnite, with an occasional match in Battlefield V. Despite the benchmarks showing a definite gap in performance between the GS75 and the Zephyrus S, I can’t say I was able to notice it.

Playing Apex Legends I routinely observed a frame rate that ranged from 100 FPS to 120 FPS with all settings set to High. With Fortnite set to Epic, 110 FPS to 120 FPS seemed to be the sweet spot. With Battlefield V’s support for the RTX’s real-time ray tracing, I set DXR to ultra and monitored a very consistent 95 FPS to 100 FPS. Overall, the in-game experience closely matched the in-game experience of the higher tuned Zephyrus S, despite what the benchmarks would lead you to believe.

Normally, I would praise a laptop with a 512GB SSD as it’s just enough room for a handful of AAA games and personal files. However, MSI did something I’ve never seen. Instead of creating and hiding a small recovery partition, leaving the rest of the SSD’s capacity to the user, MSI partitioned the SSD into a 286GB and 168GB partition.

These seemingly random partition sizes added an unnecessary amount of work for me during testing, as I had to manage every app and game installation accordingly. According to MSI, the reason for the partitions is to allow users to store their data on the secondary partition leaving only Windows on the main partition, so if you need to reinstall it, you won’t touch any personal files. I see the logic with that approach, but there has to be a better way of implementing it. Also, If 512GB isn’t enough, you can add another PCIe SSD yourself after removing the bottom cover.

The keyboard on the GS75 features thin keys that require little travel to activate. A hiccup I ran into with the keyboard is that I kept losing the WASD keys when gaming. I’d find myself frantically trying to find the bump on the F key or having to look down at the keyboard to find the keys. It would’t hurt to have a white border around each WASD key, or a texture, or a more pronounced bump on the F key for quick reassurance that your fingers are in the right spot. 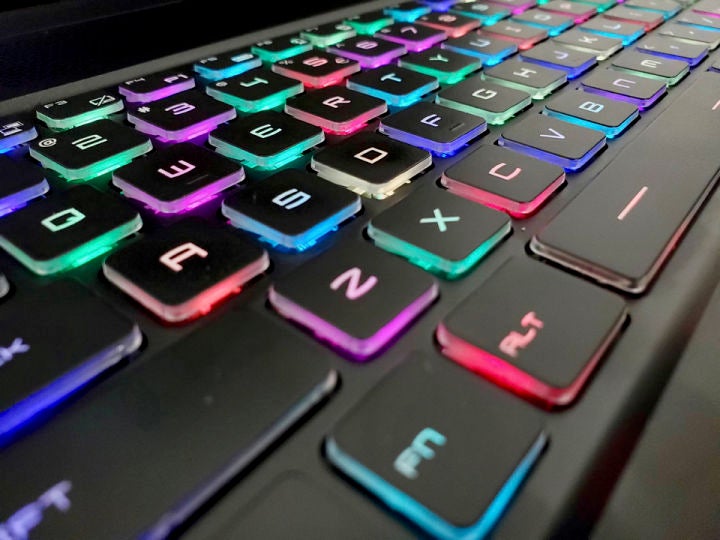 The fans and cooling system not only kept the GS75 cooler than the previous model of this laptop (GS65), but the fans weren’t loud at all. I was able to routinely play without headphones and had no issues with the audio levels.

The GS75 was able to loop a 4K video for 167 minutes, or 2 hours and 47 minutes, before powering off. That score outlasts the Zephyrus S by over an hour and falls just short of the Razer Blade 15’s score of 181 minutes. Overall, that’s better than average for a laptop of this caliber.

There are several different configurations of the MSI GS75 Stealth available, starting at $2099. The version I tested currently runs for $2999 on Amazon in the US. 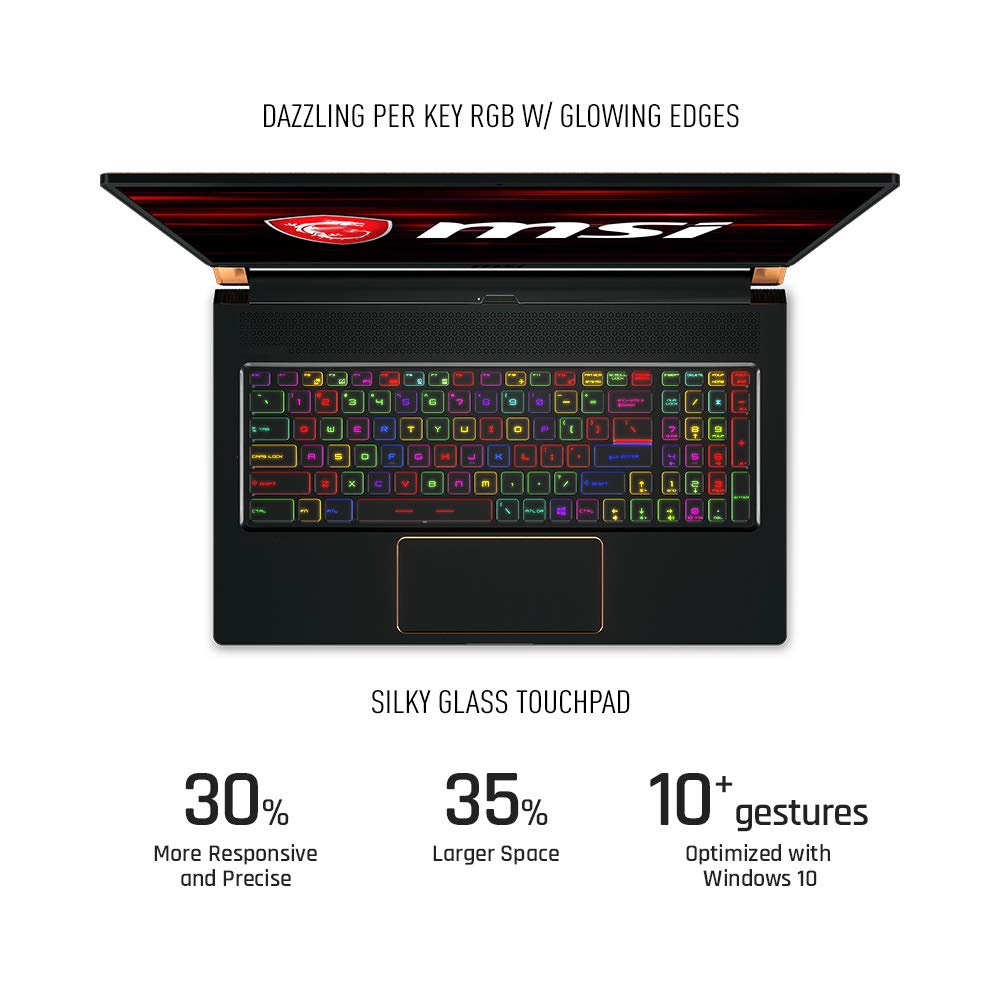 MSI’s GS75 Stealth is thin, has a crisp display, offers plenty of power, and has decent battery life too. At nearly $3,000 it’s not cheap, but given its specs, it’s priced accordingly. With nearly identical real-world performance as the slightly more expensive Asus ROG Zephyrus S, the GS75 is a great option if you’re looking for an RTX 2080 laptop.