Red Dead Redemption 2’s anticipated Windows PC version arrived this week, and so far, plenty of PC gamers who have been waiting a year to play Rockstar’s sprawling Western epic have had a rough time with the port.

Now that I’ve had a chance to check out the publicly released game as well as the preview build I tried at Rockstar’s offices last month, I’m sad to report that I’ve also been running into a variety of problems.

The issues cropped up right from the start, when the PC version launched on Tuesday. Multiple Polygon staffers had problems just getting the game to download and install. The download process kept getting interrupted for no apparent reason, with the Rockstar Games Launcher asking us to resume.

Rockstar patched the app on Wednesday to address a number of problems with installing and booting up the game. (Rockstar’s launcher/storefront, which the publisher released in mid-September, is required to play the PC version of Red Dead Redemption 2. It is possible to purchase the game at other digital retailers, such as the Epic Games Store, although Rockstar won’t be selling it on Steam until December.)

The download issue was particularly frustrating considering Red Dead Redemption 2’s massive size. I had started the 112.5 GB download at the beginning of the workday on Tuesday, in hopes that I’d be able to start playing by lunchtime. Imagine my surprise when I checked in about three hours later, at noon, to discover that the download had stopped after just 10.7 GB! (I have gigabit internet at my apartment, and although my PC is on Wi-Fi and doesn’t get anywhere near that speed, the download was proceeding at 20-25 MB per second when I started it, so it should have taken about 90 minutes to complete.)

Some players have seen the game crash to the desktop, with the Rockstar Launcher giving them a generic error message saying that “Red Dead Redemption 2 exited unexpectedly.” I’ve only had that happen to me once, when I was scrolling around the in-game map with my mouse. But I’ve been dealing with a much worse problem: an inexplicable stuttering issue that threatens to make the game unplayable.

Every couple of minutes or so — and sometimes more often than that — the action freezes entirely, for multiple seconds. I’ve experienced this during cutscenes and gameplay, which makes sense, since all of Red Dead Redemption 2’s cutscenes are rendered live in the engine.

I haven’t been able to determine anything specific that causes this to happen, except that it occurred much more frequently (albeit with a shorter duration on the individual freezes) when I was tooling around in the photo mode once. And it has also happened when there’s no “action” at all: I once saw the game freeze when I was just sitting in front of a fireplace.

I tried to use Nvidia’s GeForce Experience software to capture footage of the freezing issues, but the recordings cut out before the game resumed. (I have files on my PC where the video and audio begin to stutter, and then the clip just ends.) So instead, I resorted to using my phone to capture an off-screen video. As you can tell, I wasn’t kidding when I said that the freezes lasted for “multiple seconds” — in this particular case, it was eight seconds, although that’s not always how it goes down.

I’m not alone in this; dozens of people are reporting the same problem in a thread on the Red Dead Redemption subreddit. I should note that Red Dead Redemption 2 on PC allows players to choose the game’s graphics API — DirectX 12 or Vulkan — and I’ve run into the freezing issue on both. (I’m sticking with DirectX 12 because performance in general is much smoother for me than with Vulkan.) What’s more, multiple players in the Reddit thread have said they’ve experienced freezing while playing on Vulkan.

It appears to be a CPU issue, with players reporting that usage spikes to 100% during the freeze or right when the game resumes. My PC contains an Intel Core i5-7500, which isn’t the latest and greatest processor in the world but comfortably exceeds Red Dead Redemption 2’s minimum spec. (With an RTX 2060 Super on Nvidia’s latest drivers and 16 GB of RAM, I’m able to achieve a relatively stable 60 frames per second at 1080p on high settings — in the snowy mountains of the game’s prologue, at least.) 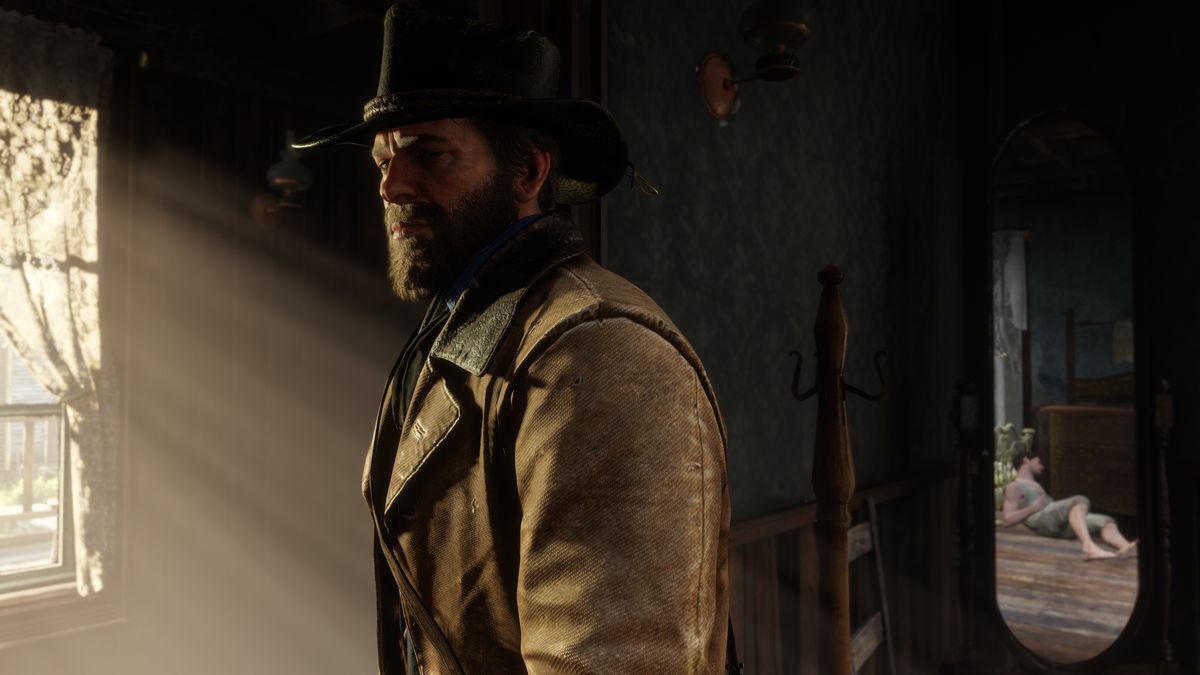 Rockstar released updates on Wednesday evening for both its launcher and the game itself, although the patch notes only mention fixes for crashing issues. Apparently, some of them were being caused by antivirus software; as of this writing, Rockstar’s support site is still recommending that players temporarily disable their antivirus app as a workaround, which is certainly not an ideal solution. And a number of players are now reporting that the game update made things worse.

It’s all a bummer, because aside from the aforementioned problems, Red Dead Redemption 2’s PC port is as impressive as it was during my preview session. Despite the stuttering I experienced in the photo mode, I’ve really enjoyed playing around with it. Another PC-exclusive option is Nvidia’s ultra low-latency mode. Rockstar didn’t design this as a twitch action game, and it doesn’t make sense to expect that. But when I enabled that mode in Nvidia’s settings, Arthur Morgan felt more responsive whether I was playing with a controller or keyboard and mouse.

Right now, though, the freezing issue is bad enough that I simply can’t play the game until Rockstar fixes it.

Demon’s Souls PS5: A Walkthrough Of Boletaria Up...