As Mark Starrett recalls it, Microsoft called a couple years ago and asked him for a whole bunch of joysticks. “They’re like, ‘We can’t tell you what they’re for, but we’re doing something cool,’” said Starrett, Logitech’s senior global product manager. “So we sent them, I believe, over 200 of our 3D Extreme Controllers, no questions asked.”

He found out in May 2018 what was going on. That’s when Microsoft announced the Xbox Adaptive Controller, a device that has won praise from product reviewers and disability advocates for the multifaceted way in which it enables players with disabilities to enjoy video games. And so, with Microsoft’s secret revealed, Starrett got to work on his next project, which is launching today.

That is the Logitech G Adaptive Gaming Kit, which is more or less a tool set for the Xbox Adaptive Controller that supplies even more functionality for players with specific needs. At $99, the kit includes several button and trigger variations, plus two flexible game boards, where the utilities are affixed and then custom mounted wherever the user needs them.

It also turned into a rich and personally rewarding year of work for Starrett, a 23-year veteran of joystick and peripheral design.

“I probably would have made maybe another keyboard,” had he not been put on the Adaptive Gaming Kit project, Starrett said. “But this is a much more important thing to do. I love making stuff that people can use, but this was an entirely new and really different thing. Probably the most rewarding work that I’ve been a part of.” 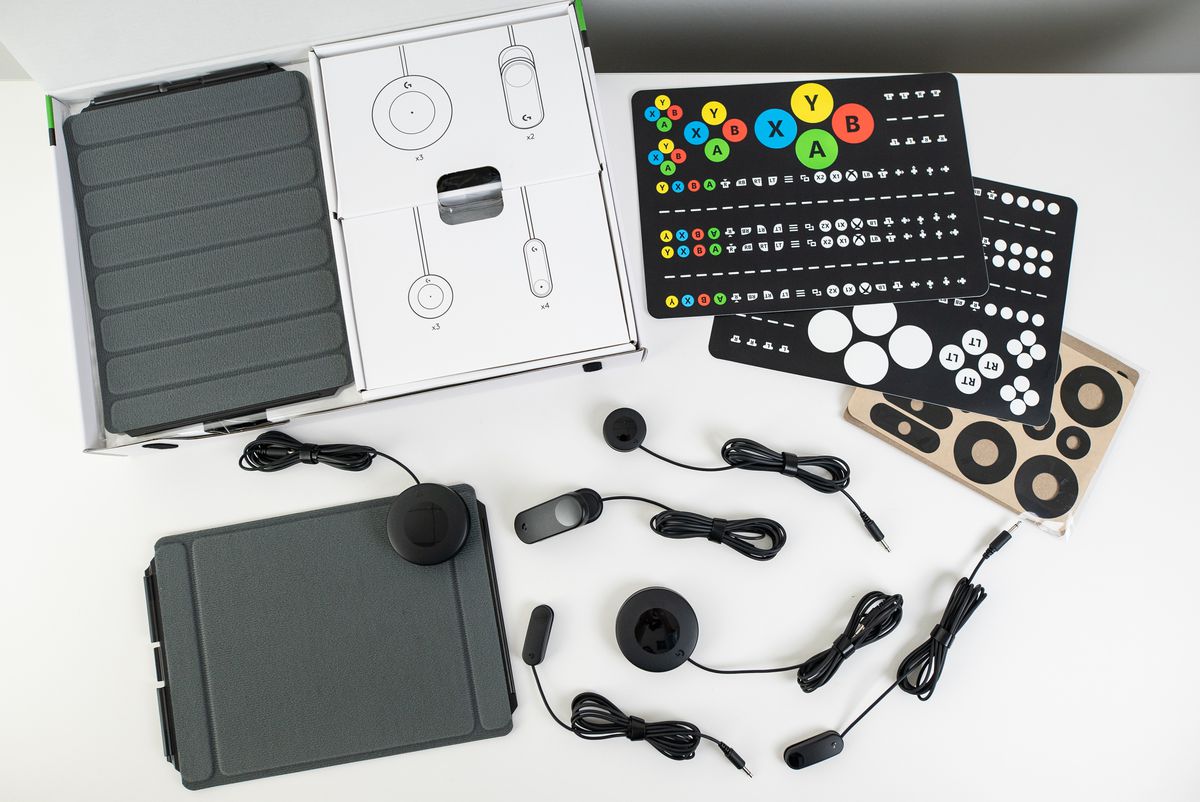 Everything in the Logitech G Adaptive Gaming Kit
Logitech

Where to begin, though? He and others with Logitech worked with AbleGamers, the U.S.-based advocates for players with special needs, as well as Microsoft’s Inclusive Tech Lab and the Abilities Research Center of the Icahn School of Medicine at Mount Sinai in New York.

Logitech also worked closely with SpecialEffect, a U.K.-based charity that helps gamers with disabilities acquire or set up specialized peripherals so that they may play along, too. Following around Special Effect, Starrett said he was inspired by their “traveling bento box” of customized accessories. Basically, Special Effect volunteers would wheel up in a van carrying dozens of different switches, adapters, prosthetics, and the like, assess their player’s needs, and get to work setting them up. “We decided we were going to make an individual version of that, that anyone can buy, to do that for themselves,” Starrett said.

The Adaptive Gaming Kit’s variable triggers are probably the biggest development for players, Starrett reasoned, mostly because there isn’t anything like them available in the mass market. What is available “is all expensive, and until you try it and experiment with it, you don’t know if you can use it,” he said.

Triggers can be custom fit either to be a kind of binary input (where the throttle is either 100 percent or 0 percent) or they can use a variable trigger that have about 2.5 millimeters of travel space, Starrett said. “They’re easy to press, they’re very stable,” he said. “Those are actually built with the same switch that’s inside our new G915 Lightspeed low profile keyboard.” The keyboard switches make for a more durable part, Starrett said.

A light-touch button, with only 0.87 mm of travel space, accommodates players who have strength and motion impairments. The Gaming Boards are a bit hard to describe and are better seen in action, but what they really are is a multipurpose surface that gamers can affix their switches and buttons to. Players with limited range of motion, or who use something other than their hands (feet, moving their head, etc.) need their controls within reach in a very specific spot, Starrett explained. The boards, one is rigid and the other is flexible, hold the switches with attachment stickers and loop ties.

“For example, Charlie [a player Starrett met] took the folded one and he put it over his knee brace,” Starrett explained. “He was pressing [buttons] with his left knee and his right knee, and he had the Y button on his headrest. He was using a joystick to do all of his running, and he was up and playing Madden in just a few minutes, and doing pretty decent.”

The boards’ design includes others in subtler ways, too. Starrett said the original version of the gaming boards was a matte black, until a player pointed out that those with poor vision contrast might not be able to identify their buttons (which are a matching black plastic). So, Starrett said, Logitech switched the color to the slate gray seen in today’s product shots, for extra visibility.

The product box also takes a cue from the Adaptive Controller’s thoughtful packaging, which is designed to be opened quickly, simply and without a lot of force or complex motions. Cables themselves are also clearly marked, at their plugs, with their corresponding input (A button, B button, etc.) so that players can quickly disassemble and reconfigure their setup.

For Starrett though, a lot of the design inspiration came simply from the players he met. One player, he said, was a teenager who used to be very active in sports, but lost the use of her body below the neck after contracting a serious illness. Starrett said she probably couldn’t make use of anything in Logitech’s kit (she needs custom blow-through sticks that allow her to play a game “like a harmonica,” he said). But still, watching her excel at Madden NFL 19, and her determination to continue playing, motivated Starrett to do something for players with the same desire.

A hardcore Destiny 2 player he met spoke of feeling like he was holding his team back on cooperative missions, because he couldn’t do certain jumps or other maneuvers to make it to the next area; he had to wait for his teammates to advance and then respawn on them. “Well, when he got a hold of that light touch controller, he was now able to do jumps, and play with everybody else without any limitation,” Starrett said.