Antonio Brown, the Oakland Raiders receiver at the center of one of the most bizarre training camp holdouts in a league that has known many, is on the lookout for the Schutt AiR Advantage helmet. I know where he can find it and play with it, and no one can tell him to play with a newer model. Hell, he can wear a helmet that’s 50 years old, if he wants.

It’s in Madden NFL 20, which starred Brown on its cover last year. While the game’s fabled Curse may not have struck in 2018, it has assuredly turned him to polonium-210 for 2019. A four-time All-Pro and surefire Hall of Famer, Brown wore out his welcome in Pittsburgh last year; was traded to the comically dysfunctional Raiders in March; had his contract adjusted by that team to make him the league’s highest-paid wide receiver; and has shown up to NFL training camp, only to pitch a conniption fit over the type of helmet he may wear.

Antonio Brown’s dispute with the NFL over a helmet, explained

Brown, for reasons unknown, loves his old helmet so much that he was willing to retire rather than be told to get a new one. This is important because his helmet is so old the league won’t certify it for play. Respecting the fact that (seriously for a second here) a good-fitting helmet with a natural field of view out of the facemask is important to professionals, the league gave them last year to say goodbye to their noncompliant lids and get comfy with a new one.

Brown said last week that he wasn’t having any of that. He even tried repainting his old Steelers dome and carting that on the practice field (he was stopped), and then threatened full retirement if he didn’t get his way. An arbitrator put a stop to that talk yesterday; after ruling that Brown must use equipment certified safe by the National Operating Committee for Standards and Athletic Equipment, he set out to find a newer model of the same make — which Schutt discontinued after 2011.

Me being me, I went looking for this piece of equipment among the items in Madden NFL 20. Lo and behold, it is indeed still there, and Brown is still wearing it on the main roster as of this morning 11:53 a.m. EDT. 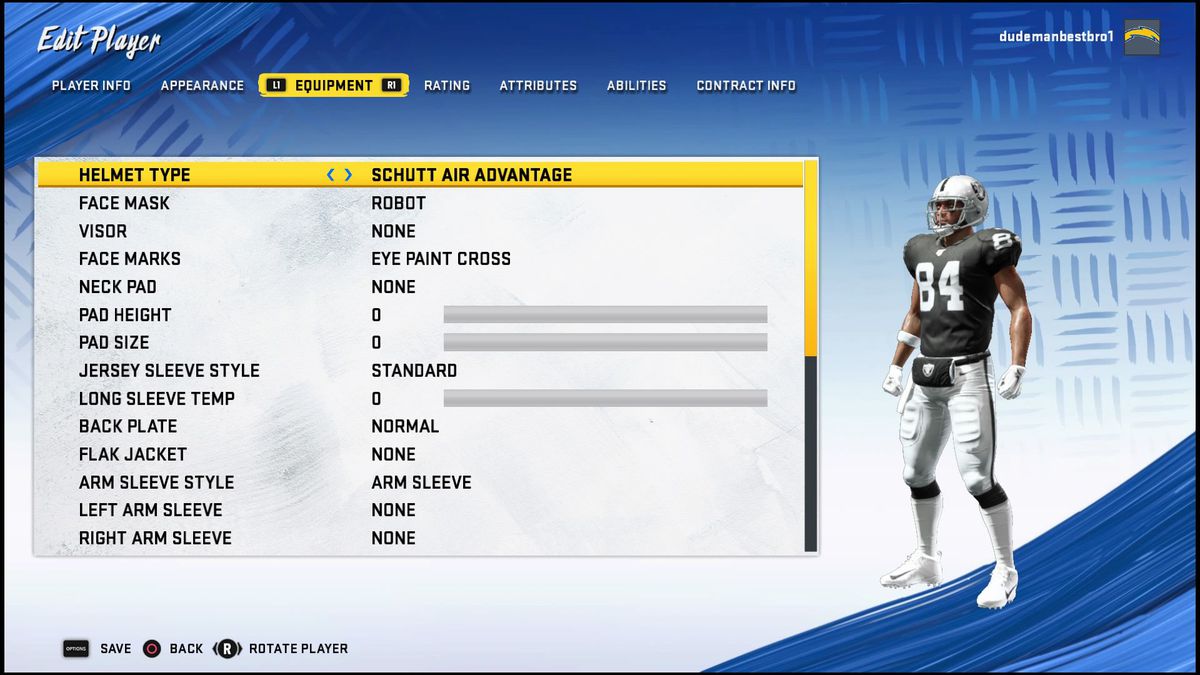 Other players, notably New England quarterback Tom Brady, have moved away from the Schutt AiR Advantage and this is reflected in Madden NFL 20, where Brady has a Riddell Speed Flex; he’s been seen wearing one in training camp.

I think Brown’s beef is more about taste and aesthetic, not safety or performance. The Schutt AiR Advantage is the most old-school-looking of the current models — no weird panels, vents, creases, strange air holes, etc. It’s a completely smooth globe with round earholes, the kind you expect to see if you’re talking about things like legacy and tradition and greatness and all that. I know because it’s the one I picked for Perseus Oxendine, my rookie in Face of the Franchise: QB1, and it was for those reasons.

But if Antonio wants to go super old-school, have I got a hat for him: the Riddell TK which dates back to the mid-1960s. It has been in Madden since Madden NFL 13 and comes with three old-school facemask options, including the Joe Theismann one-bar. Unfortunately, it no longer has the no-facemask option; that went out of the game a few years ago.

As for why all of this is OK for Madden and EA Sports, which has a super exacting reputation for accuracy? Well, the continued existence of the Riddell TK in Madden suggests everyone’s fine with some here-and-there non-serviceable cosmetics. (You can wear a pair of classic Air Jordans in this year’s game. Really.) And besides, the Riddell AiR Advantage as a make is technically still compliant.

I’ll still call down to Tiburon to ask if it has plans to mess with Antonio’s helmet in an update. I wouldn’t put it past the studio to do something in an Ultimate Team mission either. I’ll let you know what I hear.